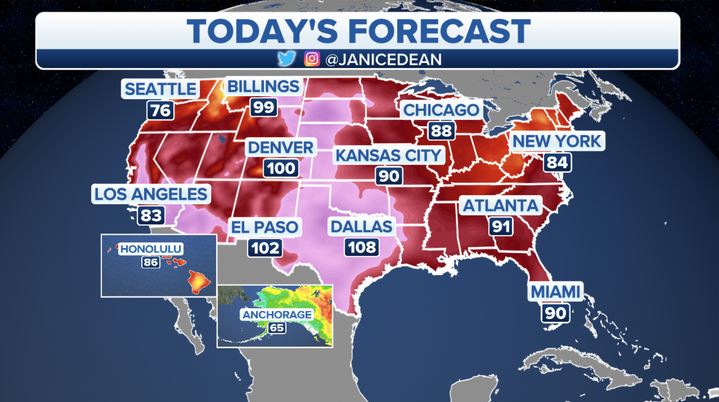 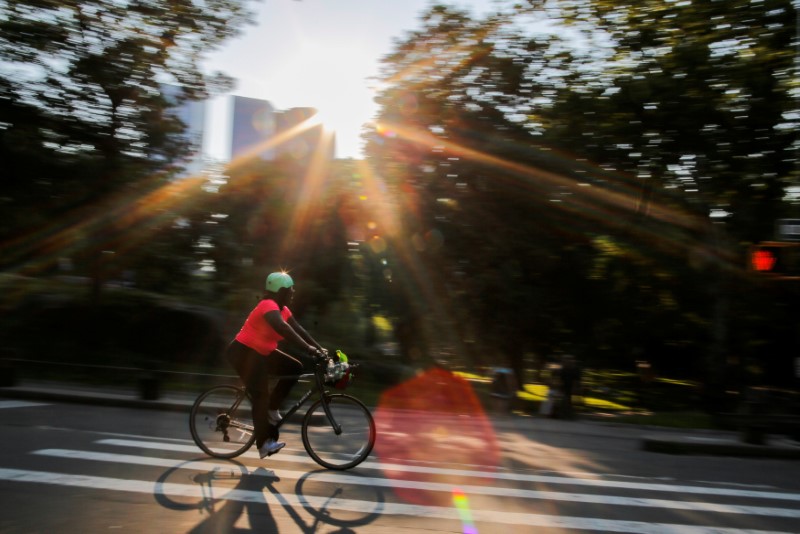 (Reuters) – Sweltering temperatures flirting with 100 degrees Fahrenheit (37 Celsius) will blister parts of the U.S. Midwest and East Coast on Monday and sizzle at least through the Independence Day holiday on Wednesday, the National Weather Service said.

More than 113 million Americans are under heat warnings or advisories stretching from the Mississippi Valley, up to Philadelphia, Chicago and bending over to New York, Boston, Baltimore and Washington D.C., said Patrick Burke, a meteorologist with the NWS Weather Prediction Center in College Park, Maryland.

“Hot is the only word for it,” Burke said. 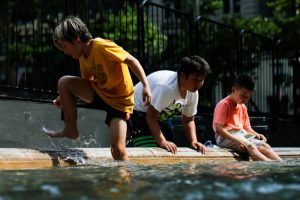 Cities from St. Louis to New York, Chicago and Boston will be in the mid-90s, but the humidity will push the heat index up, making it feel like 100-to-105 degrees Fahrenheit, he said.

Baltimore, MD and Albany, NY, might hit 99 degrees, he said.

“It’s going to be a hot week everywhere east of the Rockies,” Burke said. “At risk populations should definitely seek cool shelter.”

The hot weather is dangerous for young children, the elderly and people with health problems.

Don’t expect much relief overnight for the next few days as nighttime lows might not dip below 80 degrees Fahrenheit, the weather service said.

A bubble of high pressure air floating over northern Tennessee is to blame, he said, locking the hot air in a large swath of the eastern U.S., Burke said.

Cities across the region from the Mississippi river to the East Coast have set up cooling centers to keep people out of the dangerous heat. 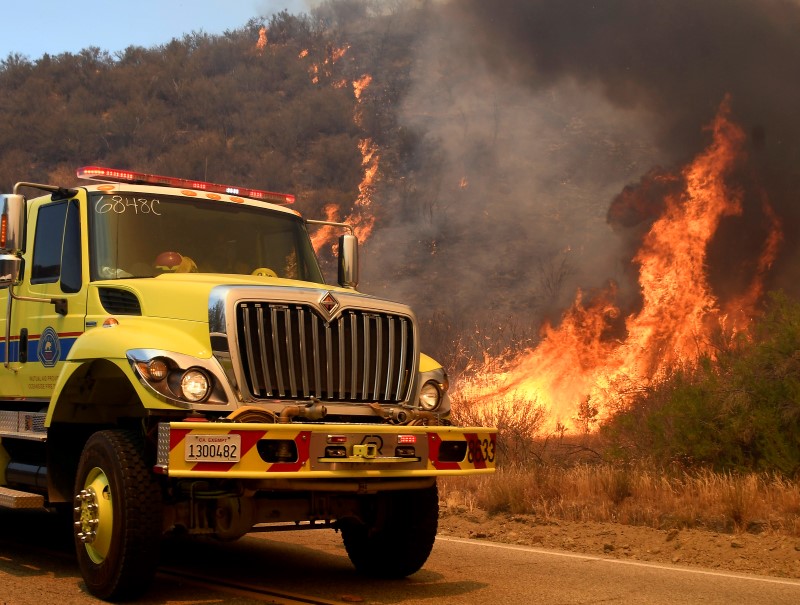 (Reuters) – Firefighters in drought-hit California who are battling a 50-square-mile wildfire could be hampered by triple-digit heat, wind gusts up to 30 mph and low humidity on Tuesday, according to the National Weather Service.

About 3,000 firefighters have been fighting to contain the so called Sand Fire on the rugged northwestern fringes of the Los Angeles National Forest since Friday.

The blaze has killed one person, found in a burned-out car parked in a driveway, and destroyed at least 18 homes. An estimated 20,000 to 30,000 people were forced to evacuate but late on Monday, fire officials lifted the evacuation order for the majority of residents.

The fire was just 10 percent contained on Monday evening as crews backed by bulldozers labored to hack buffer lines around its perimeter as it cast a pall of smoke and soot over a wide area.

An air quality advisory was in effect in the area of the fire until Tuesday midnight local time after much of the Los Angeles basin was dusted with a thin layer of fine white ash from the fire over the weekend.

Among the properties to go up in flames was the landmark Sable Ranch, a popular location for television and movie shoots.

About 300 miles to the north, another fire ravaged a hilly area near the scenic coastal city of Carmel-by-the-Sea, churning through 16,100 acres (6,500 hectares) and destroying 20 homes, authorities said.

The so-called Soberanes Fire, burning in the Los Padres National Forest in Monterey County, threatened 1,650 structures by Monday evening and was only 10 percent contained, the U.S. Forest Service said.

The causes of the two fires were under investigation. They are among some 3,750 blazes large and small to have erupted across California since January, a higher-than-normal total, collectively scorching more than 200,000 acres (80,940 hectares), state fire officials said.

The biggest so far was last month’s Erskine Fire, which consumed 48,000 acres (19,429 hectares) northeast of Bakersfield, killing two people and destroying about 250 structures.

(Reporting by Brendan O’Brien in Milwaukee; Editing by Raissa Kasolowsky)