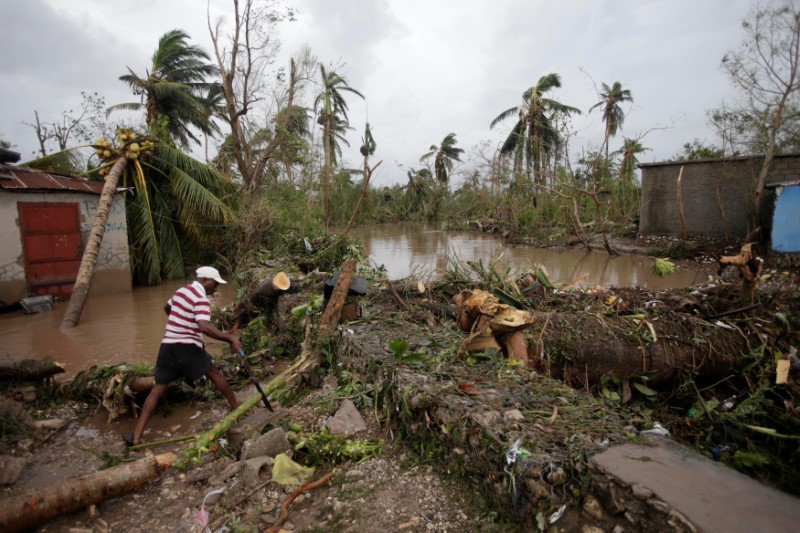 By Zach Fagenson and Scott Malone

JUPITER/ORLANDO, Fla. (Reuters) – Hurricane Matthew, the fiercest Caribbean storm in nearly a decade, blasted the Bahamas on Thursday as it headed for the southeastern United States after killing at least 140 people, mostly in Haiti, on its deadly northward march.

The hurricane was likely to remain a Category 4 storm on the five-step Saffir-Simpson scale as it approached the United States, where it could either take direct aim at Florida or brush along the state’s coast through Friday night, the center said, warning of “potentially disastrous impacts.”

Hurricane conditions were expected in parts of Florida by later on Thursday.

As the storm passed about 25 miles (40 km) from the Bahamas capital of Nassau, howling gusts of wind brought down palms and other trees and flipped shingles off the rooftops of many houses. Bahamas Power and Light disconnected much of Nassau as Matthew bore down on the town.

No structural damage was immediately visible, a Reuters witness said, and rain was fairly light.

Local media reports from southern New Providence indicated that the communities of Yamacraw, Coral Harbour and Pinewood were hit hard by floods after a storm surge of some 10 to 15 feet (3 to 4.5 meters). There had been no reports of casualties.

It was too soon to predict where Matthew might do the most of its damage in the United States, but the National Hurricane Center’s hurricane warning extended up the Atlantic coast from southern Florida through Georgia and into South Carolina. More than 12 million people in the United States were under hurricane watches and warnings, according to the Weather Channel.

Roads in Florida, Georgia and North and South Carolina were jammed, and gas stations and food stores ran out of supplies as the storm approached with high winds, strong storm surges and drenching rain.

Florida Governor Rick Scott warned there could be “catastrophic” damage if Matthew slammed directly into the state and urged some 1.5 million people there to heed evacuation orders.

“If you’re reluctant to evacuate, just think about all the people… already killed,” Scott said at a news conference on Thursday. “Time is running out. This is clearly either going to have a direct hit or come right along the coast, and we’re going to have hurricane-force winds.”

Scott, who activated several thousand National Guard troops to help deal with the storm, warned that millions of people were likely to be left without power.

Florida, Georgia and South Carolina opened shelters for evacuees. As of Thursday morning, more than 3,000 people were being housed in 60 shelters in Florida, Scott said. 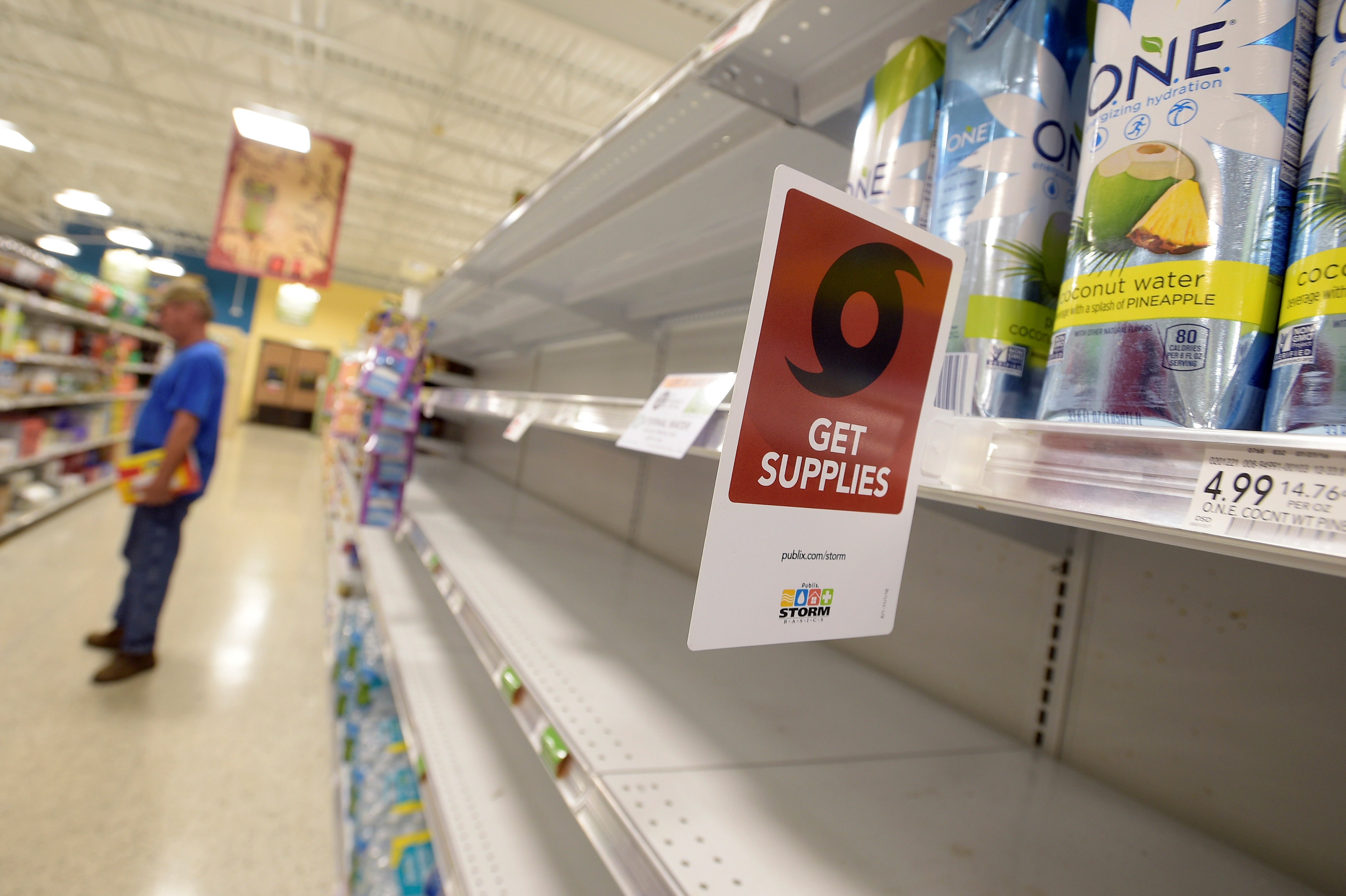 President Barack Obama declared a state of emergency in Florida, the White House said, a move that authorized the Department of Homeland Security and the Federal Emergency Management Agency to coordinate disaster relief efforts.

Hundreds of passenger flights were canceled in south Florida, and the cancellations were expected to spread north in coming days along the storm’s path, airlines including American Airlines, Delta Air Lines and United Airlines  said. A FedEx spokeswoman also warned of possible disruptions to package services.

Theme parks and other attractions in the central Florida city of Orlando such as Walt Disney World, Universal Studios Florida and SeaWorld were closing on Thursday afternoon and would remain closed through Friday, according to their websites.

Schools were closed across the region.

At about 2 p.m. EDT (1800 GMT), Matthew was 125 miles (205 km) east-southeast of West Palm Beach, the hurricane center said. It was heading northwest at about 14 mph (22 kph) and was expected to continue on this track on Thursday.

The eye, or center, of the storm was forecast to pass close to Freeport, on Grand Bahama, the most industrialized part of Bahamas and home to Buckeye Partners LP’s BORCO oil storage terminal, Statoil’s south Riding Point Terminal as well as pharmaceutical manufacturing.

Grand Bahamas Shipyard, also in Freeport and used by Carnival Corp. for cruise ship repairs, was closed from Monday as the storm approached.

On Tuesday and Wednesday Matthew, the strongest hurricane in the Caribbean since Felix struck Central America in 2007, whipped Cuba and Haiti with 140 mph (225 kph) winds and torrential rain, pummeling towns and destroying livestock, crops and homes.

The last major hurricane, classified as a storm bearing sustained winds of more than 110 mph (177 kph), to hit the United States was Hurricane Wilma in 2005.

In Florida, fuel stations posted “out of gas” signs after cars waited in long lines to fill up. At a Subco gas station in Orlando, the gas pumps ran dry on Wednesday afternoon.

The shop was a stopping off point for coastal residents seeking shelter inland from the coast. Among them was Jonas Sylvan, 44, of Melbourne, Florida, who planned to hole up in a hotel with his wife, two daughters and dog. “We’re just trying to get away from the coast,” he said. “It’s safer here.”

Bumper-to-bumper traffic extended for more than 10 miles (16 km) on the main highway leading west to Orlando from the coast.

In the central Florida coastal city of Jupiter, people scrambled to make preparations.

“Our house is wood construction, so who knows what will happen,” said Libby Valentine, 75, of Jupiter. “The whole idea is to stay safe and hope you have the grace to deal with the aftermath because you might not have a house.”

Most stores were closed or planning to do so soon. A line of two dozen cars snaked out of a Marathon gas station and tied up traffic on a nearby road. Next door, the windows of a Sabor Latino Supermarket were covered with plywood and a hand-written sign said it closed at noon.