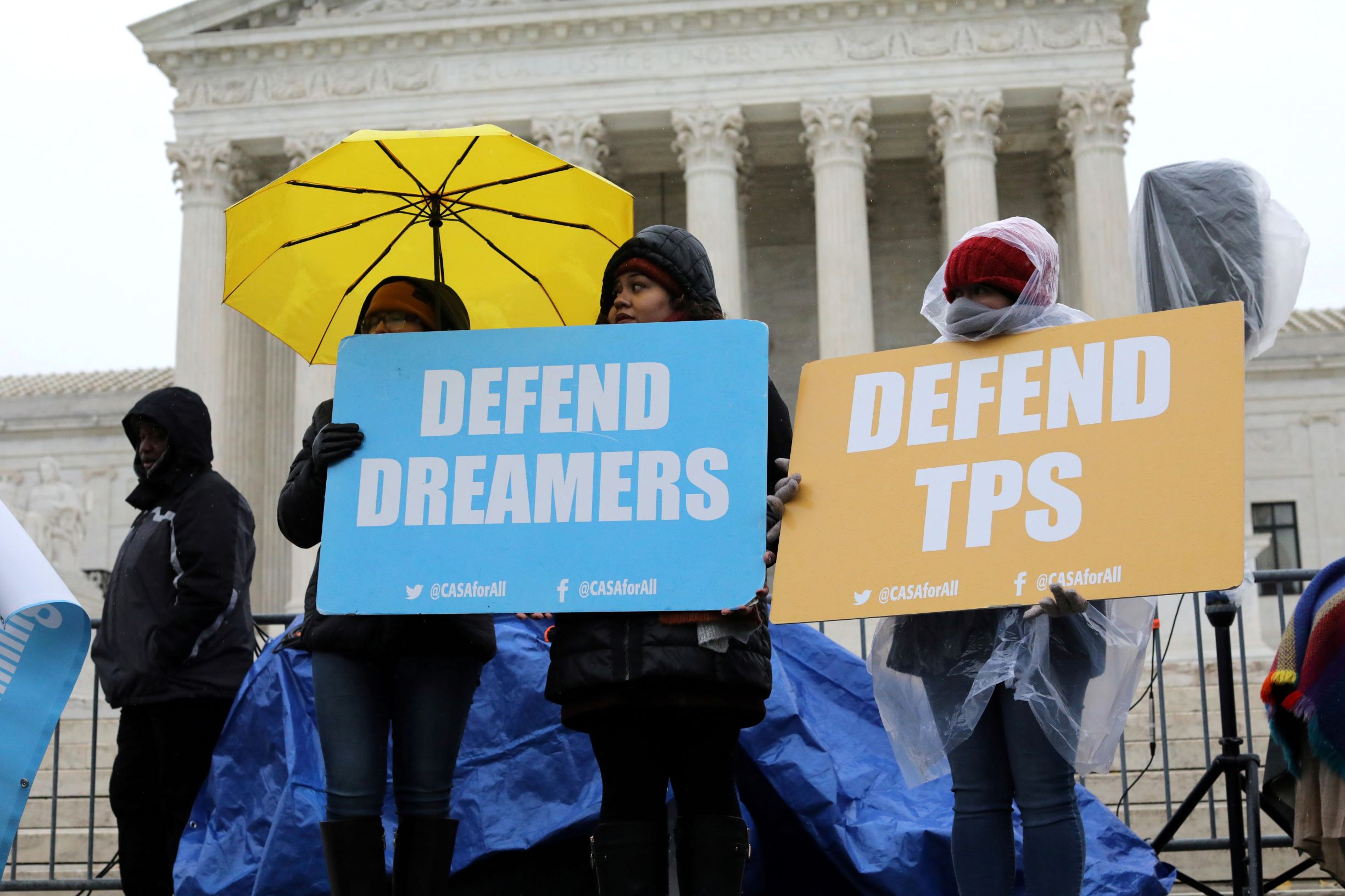 Several of the five conservative justices appeared skeptical that courts can even review the Republican president’s 2017 plan to end the Deferred Action for Childhood Arrivals (DACA) program, which had been implemented in 2012 by his Democratic predecessor Barack Obama. Even if the court finds that it can be reviewed, conservative justices indicated they think Trump’s administration gave a reasonable explanation for its decision.

Liberal justices emphasized the large number of individuals, businesses and others that have relied on the program.

The justices heard the administration’s appeals of lower court rulings in California, New York and the District of Columbia that blocked Trump’s move as unlawful and left DACA in place.

Trump’s administration has argued that Obama exceeded his constitutional powers when he created DACA by executive action, bypassing Congress. Trump has made his hardline immigration policies – cracking down on legal and illegal immigration and pursuing construction of a wall along the U.S.-Mexican border – a centerpiece of his presidency and 2020 re-election campaign.

Kavanaugh said there is no reason to think that the administration’s consideration of the impact its decision would have on individuals, when weighed against its contention that the DACA program was unlawful from the beginning, was anything other than a “considered decision.”

Conservative Chief Justice John Roberts – who could be the pivotal vote in deciding the case – questioned whether there was much more that needed to be added to the administration’s rationale even if the court were to rule in favor of the challengers and send the issue back for further review.

The challengers who sued to stop Trump’s action included a collection of states such as California and New York, people currently protected by the program and civil rights groups.

Were the court to rule in favor of the challengers it would merely prolong the uncertainty for “Dreamers,” Gorsuch said.

“What good would another five years of litigation … serve?” Gorsuch asked.

DACA currently shields about 660,000 immigrants – mostly Hispanic young adults – from deportation and provides them work permits, though not a path to citizenship.

Much of the administration’s reasoning in trying to end DACA was based on then-Attorney General Jeff Session’s conclusion in 2017 that the program was unlawful.

Gorsuch pressed an attorney representing supporters of DACA about the limits on courts to second guess decisions by federal agencies that are within their discretion to make. Gorsuch also seemed skeptical that the administration had not adequately addressed its reasons for rescinding the program, as DACA advocates have argued.

Liberal Justice Sonia Sotomayor demanded that U.S. Solicitor General Noel Francisco, who argued the case for the administration, identify whether the administration considered all the harm that ending the program would do, or if it was just a “choice to destroy lives.”

Francisco was repeatedly questioned as to why the administration has justified ending the program because of its purported unlawfulness instead of giving other reasons for why it wants to.

Toward the end of the argument Francisco pushed back, saying the administration was not trying to shirk responsibility for ending a popular program.

“We own this,” Francisco said, referring to Trump’s decision to kill DACA.

The lower courts ruled that Trump’s move to rescind DACA was likely “arbitrary and capricious” and violated a U.S. law called the Administrative Procedure Act.

The justices must determine whether administration officials failed to provide adequate reasons for the decision to end DACA. The initial memo rescinding DACA, the plaintiffs said, gave a “one-sentence explanation” and did not spell out why the administration believes the program is unlawful. The justices will also have to decide whether the administration’s action against DACA is even something courts can review.

Several hundred DACA supporters gathered outside the court on a gray and chilly Tuesday morning, chanting, banging drums and carrying signs that read “home is here” and “defend DACA.”

Anel Medina, a 28-year-old DACA enrollee and oncology nurse in Philadelphia, was among the demonstrators.

“It changed my life. I was able to get a job … finish nursing school,” said Medina, who was born in Mexico City and brought by her mother to the United States at age 5.

Medina said she was a college student and living without legal status when Obama launched DACA.

‘A DEAL WILL BE MADE’

Trump has given mixed messages about the “Dreamers,” saying in 2017 that he has “a great love” for them even as he sought to kill a program that protected them from deportation. Ahead of the arguments on Tuesday, his tone was darker.

“Many of the people in DACA, no longer very young, are far from ‘angels.’ Some are very tough, hardened criminals,” Trump wrote on Twitter.

Immigrants who had been convicted of a felony or significant misdemeanor crimes were not eligible to apply to the DACA program and any DACA recipient can be stripped of the program’s protections and deported if they commit serious crimes.

Trump added, “If Supreme Court remedies with overturn, a deal will be made with Dems for them to stay!” Trump offered no details of any deal.

Trump previously has called on Congress to “advance responsible immigration reform” but never proposed a detailed replacement for DACA.

Obama created DACA to protect immigrants who as minors were brought into the United States illegally or overstayed a visa. Obama acted after Congress failed to pass a bipartisan immigration policy overhaul that would have provided a path to citizenship to these young immigrants.

The young people protected under DACA, Obama said, were raised and educated in the United States, grew up as Americans and often know little about their countries of origin.

The program, which allows eligible immigrants to obtain renewable two-year work permits, remains in effect for those already enrolled but the administration has refused to approve new applications.

The “Dreamers” moniker is based on the name of bipartisan legislation – never passed – called the DREAM (Development, Relief and Education for Alien Minors) Act that would have granted these young immigrants legal status.

(Reporting by Lawrence Hurley and Andrew Chung; Additional reporting by Ted Hesson and Susan Heavey; Editing by Chizu Nomiyama and Will Dunham)