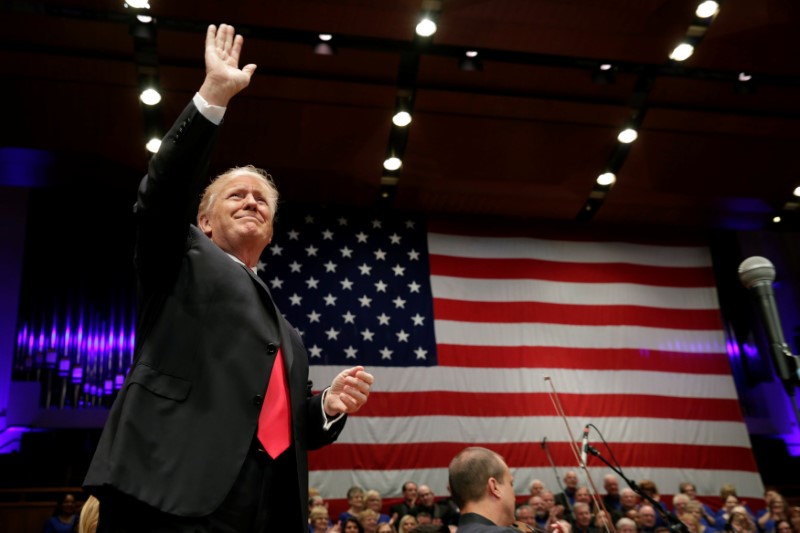 WASHINGTON (Reuters) – U.S. President Donald Trump honored military veterans in Washington on Saturday at a Kennedy Center event that resembled both a political rally and an evangelical Christian religious service ahead of the July 4 Independence Day holiday.

Using the podium again to lash out at the news media, Trump worked to energize evangelicals in his political base, noting that the U.S. currency was inscribed with the words: “In God We Trust.”

“Since the signing of the Declaration of Independence 241 years ago, America always affirmed that liberty comes from our creator. Our rights are given to us by God, and no earthly force can ever take those rights away,” he said.

Attendees at the event for veterans waved miniature American flags from their seats in the theater and raised their hands as a sign of praise while a large choir sang ahead of Trump’s remarks.

The president praised veterans from each of the U.S. military branches and highlighted his administration’s work to reform veterans’ services.

Trump, who is spending a long weekend at his property in Bedminster, New Jersey, flew back to Washington for the rally but did not spend the night at the White House, preferring to return to Bedminster.

Later, in a rare late-night post on Twitter, which he uses prolifically and sometimes controversially, Trump wrote:

“We will always take care of our GREAT VETERANS. You have shed your blood, poured your love, and bared your soul, in defense of our country.”

Trump has held campaign-like rallies regularly during his first few months in the White House and kicked off his own re-election campaign far earlier than other incumbents in recent history.

Part of his strategy to connect with his supporters has included criticizing the media, and he included harsh words for the press again in his remarks.

“The fake media is trying to silence us, but we will not let them,” he said. “The fake media tried to stop us from going to the White House. But I’m president, and they’re not.”

An atheist who has shown vehement zeal in his quest to remove Christianity from the public square is again making a challenge against the national motto of “In God We Trust” on American currency.

Michael Newdow, who has filed multiple lawsuits in his campaign against God, first submitted his complaint in 2013 stating that the motto violates the Establishment Clause of the Constitution.  However, in September of that year, a federal judge ruled against him.

He also lost an appeal to the Second Circuit Court of Appeals.

Now Newdow is seeking people to join him with suits in seven of the 12 circuits based on the Religious Freedom Restoration Act (RFRA).

“[C]hallenges to this practice under the Establishment Clause have, so far, failed,” he wrote in a recent guest post on Patheos. “Challenges under RFRA, however, are not as susceptible to misapplication. This is because every Supreme Court justice involved in the three RFRA cases heard to date has agreed that, under RFRA, religious activity may not be substantially burdened without a compelling governmental interest and laws narrowly tailored to serve that interest.”

“There is obviously no compelling government interest in having ‘In God We Trust’ on our money,” Newdow continued. “Accordingly, for those who feel that being forced by the government to carry a message that violates their religious ideals is substantially burdensome, lawsuits are now being prepared…”

Newdow is focusing on finding children because he believes children will have more of an impact on justices than adults.

Eight members of the Allegheny County Pennsylvania county council do not want God in their county.

Eight Democratic Party members of the council voted against a display that would have included “In God We Trust” as part of the display.  The national motto was to be included on the display with the Pennsylvania state motto of “Virtue, Liberty and Independence” and the one of the currency mottos, “E Pluribus Unum.”

The virulent anti-Christian group Freedom From Religion Foundation sent a letter to the council threatening the county because of the potential measure.  Democratic County Executive Rich Fitzgerald also openly has an anti-Christian attitude.

“[It’s] a movement by the right-wing evangelical Christians across the country basically to impose Christianity,” Fitzgerald said.

“You should tell the county executive he should get educated on the national motto,” Pennsylvania Rep. Rick Saccone told the Pittsburgh Tribune. “It’s their ignorance that causes them to fear having God in a government place. They shouldn’t fear the name of God or the word ‘God’ in our government.”

County commissioners in Mobile County have stood up to anti-Christianists furious that they posted a plaque with the national motto, “In God We Trust.”

The Mobile County Commission had voted in June 2-1 to display the national motto in the Government Plaza despite the outcry of anti-Christianists who said that any reference to God is automatically endorsing Christianity.

“I strongly urge the commission to reject the display ‘In God We Trust’,” anti-Christianist Amanda Scott told the Commissioners. “It would only serve to divide Mobile on religion when we’re already so divided on other issues.”

Commissioner Jerry Carl said that the word “God” is universal to multiple faiths and that it doesn’t designate a specific faith.

Anti-Christianists and other groups responded by attempting to pay for plaques that would promote their views over everyone else but the Commissioners rejected them all, instructing those who have an issue with the national motto to take it up with Congress.

Atheist activist Michael Newdow has lost another court case in his quest to eradicate all references to Christianity from society.

The Second Circuit Court of Appeals in New York ruled to uphold lower court rulings that the phrase does not violate the Establishment Clause of the Constitution and does not mean the government is choosing a religion to force on citizens.

“As the Supreme Court has repeatedly indicated in dicta, the statutes at issue in this case have a secular purpose and neither advance nor inhibit religion. The Court has recognized in a number of its cases that the motto, and its inclusion in the design of U.S. currency, is a ‘reference to our religious heritage,’” the Court ruled. “We therefore hold, in line with the Supreme Court’s dicta, that [the motto appearing on currency does] not violate the Establishment Clause.”

The Court went on to say that they disagree the plaintiffs have had a substantial burden placed on them and their religious beliefs.

“Americans need not be forced to abandon their religious heritage simply to appease someone’s animosity toward anything that references God,” ADF’s Rory Gray said to the Christian Post. “The Second Circuit rightly reached the same conclusion because this suit was based on a deeply flawed understanding of the First Amendment.”

A bill that would have mandated Pennsylvania schools display the phrase “In God We Trust” within their buildings has been weakened in an attempt to get it passed.

Representative Rick Saccone of Allegheny County has a history of introducing laws to acknowledge God’s role in the history of America.  Saccone was behind the 2012 bill that declared the 2012 “The Year of the Bible” in the state.

Saccone introduced the “National Motto Display Act” to recognize the 150th anniversary of the phrase being placed on American currency by once Pennsylvania governor James Pollock.  Pollack introduced the phrase during his time as the director of the United States Mint in Philadelphia.

“Our youth need to hear the story of our heritage and learn from positive role models in a time of decaying values,” Saccone stated. “The story of our national motto is a positive story and one that is uniquely Pennsylvanian.”

The bill was weakened by changing the mandate to post the phrase to an recommendation that schools may post the mandate at their option.  The change unanimously passed the state House.

The Pennsylvania ACLU said that if the bill becomes law, schools will be placed as risk for lawsuits if they post the phrase.

When the anti-Christian Freedom from Religion Foundation threatened the E.J. Moss Intermediate School over a production of “In God We Trust”, school administrators removed all references to religion from the script.

But the community of Lindale, Texas were not about to let anti-Christian bigotry stop their children from proclaiming the name of Christ. END_OF_DOCUMENT_TOKEN_TO_BE_REPLACED

The anti-Christian Freedom from Religion Foundation is suing the U.S. Treasury Department, saying that having “in God we trust” on currency is offensive to nonreligious American citizens. END_OF_DOCUMENT_TOKEN_TO_BE_REPLACED