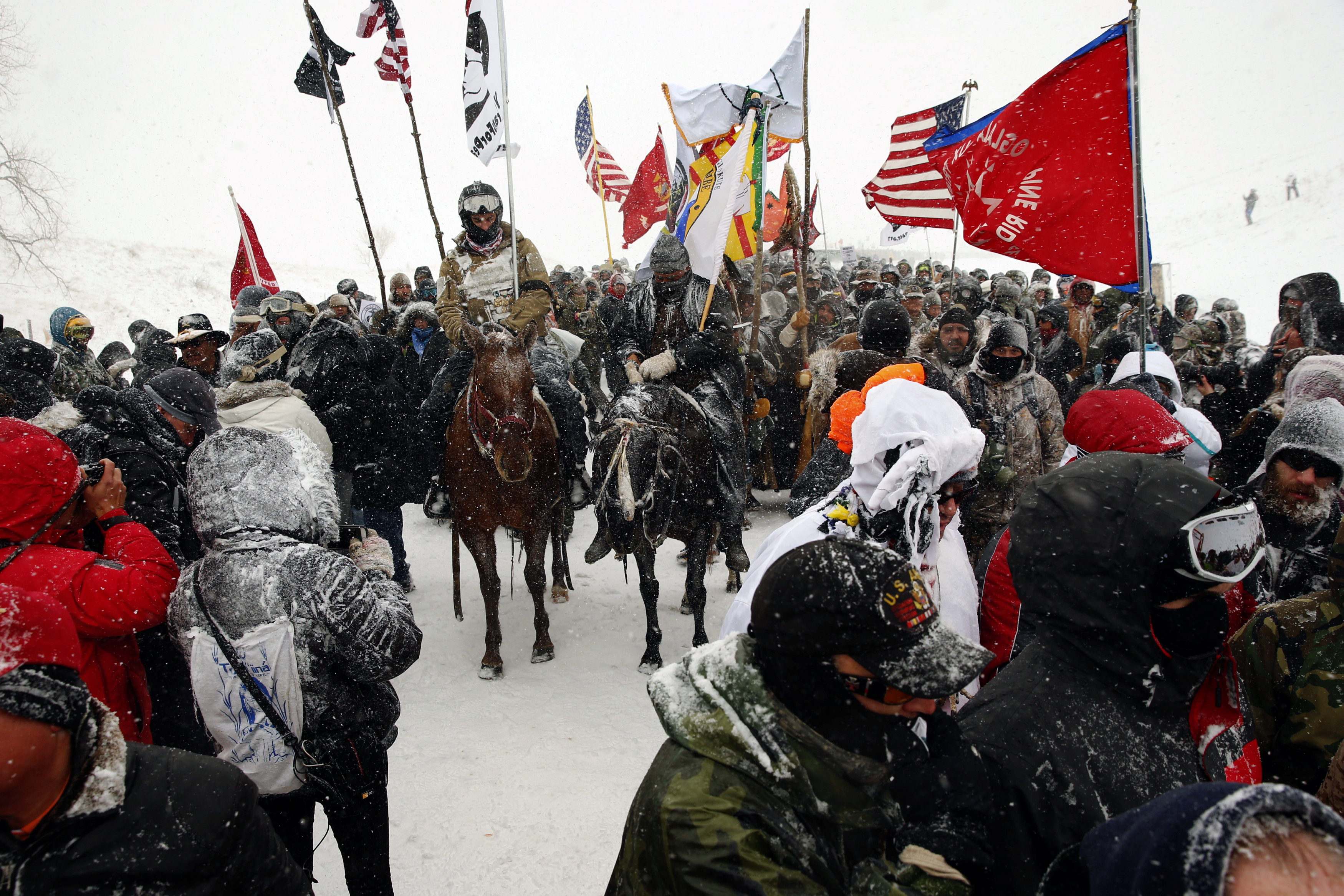 By Ernest Scheyder and Terray Sylvester

CANNON BALL, N.D. (Reuters) – A Native American leader asked thousands of protesters to return home after the federal government ruled against a controversial pipeline, despite the prospect of President-elect Donald Trump reversing the decision after he takes office.

A coalition of Native American groups, environmentalists, Hollywood stars and veterans of the U.S. armed forces protested the $3.8 billion oil project. They said construction would damage sacred lands and any leaks could pollute the water supply of the Standing Rock Sioux tribe.

The tribe still wants to speak with Trump about the Dakota Access Pipeline to prevent him from approving the final phase of construction, Standing Rock Sioux Chairman Dave Archambault told Reuters.

“The current administration did the right thing and we need to educate the incoming administration and help them understand the right decision was made,” he said.Trump’s transition team said on Monday it would review the decision to delay completion once he takes office Jan. 20.

“That’s something that we support construction of and we’ll review the full situation when we’re in the White House and make the appropriate determination at that time,” Trump spokesman Jason Miller said at a transition team news briefing. 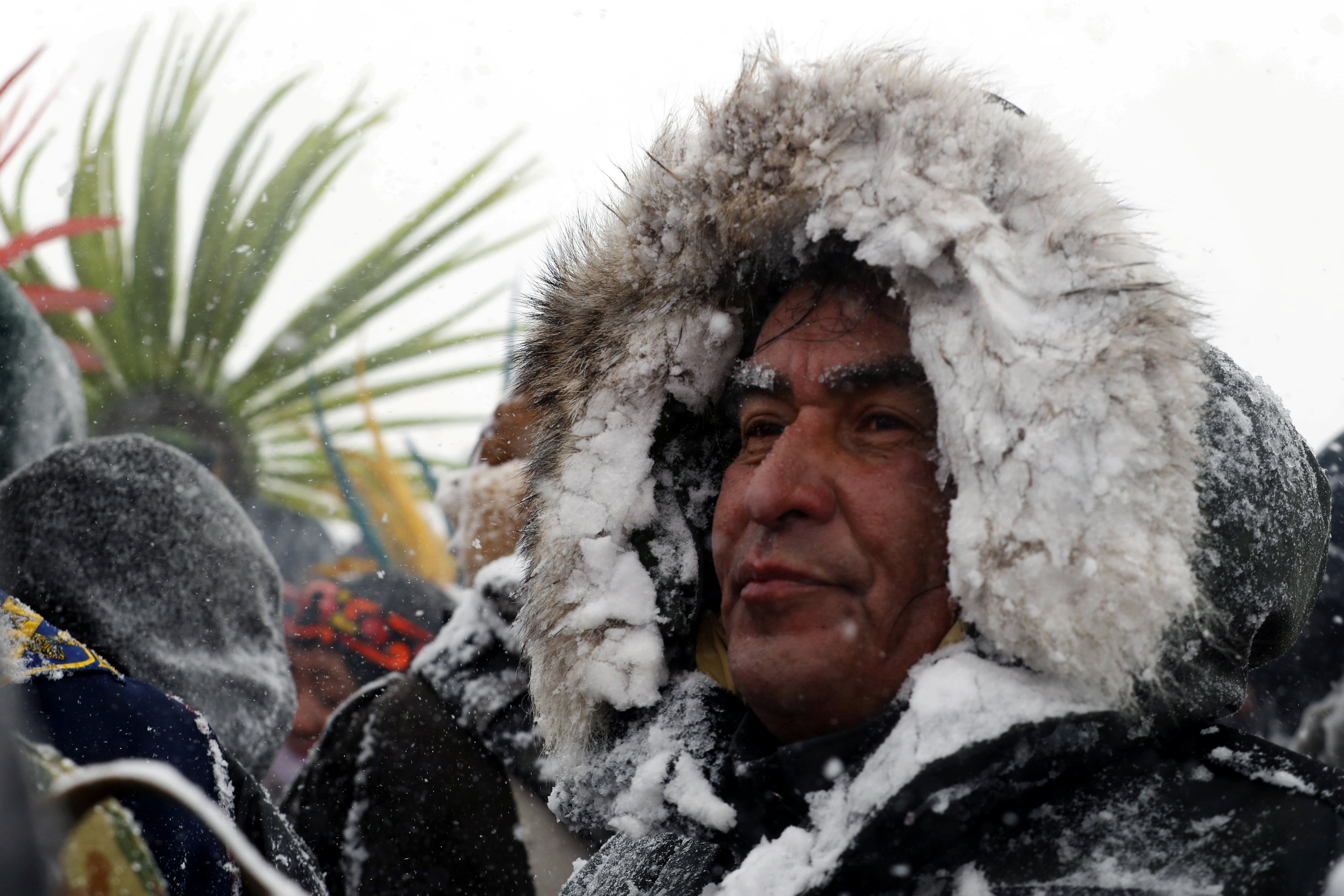 A Native American man stands in the snow during a march with veterans near Backwater Bridge just outside of the Oceti Sakowin camp during a snow fall as “water protectors” continue to demonstrate against plans to pass the Dakota Access pipeline adjacent to the Standing Rock Indian Reservation, near Cannon Ball, North Dakota, U.S., December 5, 2016. REUTERS/Lucas Jackson

Archambault said nothing would happen over the winter before Trump takes power, so protesters should leave. Many had dug in for the harsh winter of the North Dakota plains, where a blizzard hit on Monday and 40 miles-per-hour (64 kmh) winds rattled tipis and tents.

“We’re thankful for everyone who joined this cause and stood with us,” he said. “The people who are supporting us … they can return home and enjoy this winter with their families. Same with law enforcement. I am asking them to go.”

It was unclear if protesters would heed Archambault’s call to leave the Oceti Sakowin camp in Cannon Ball, North Dakota. 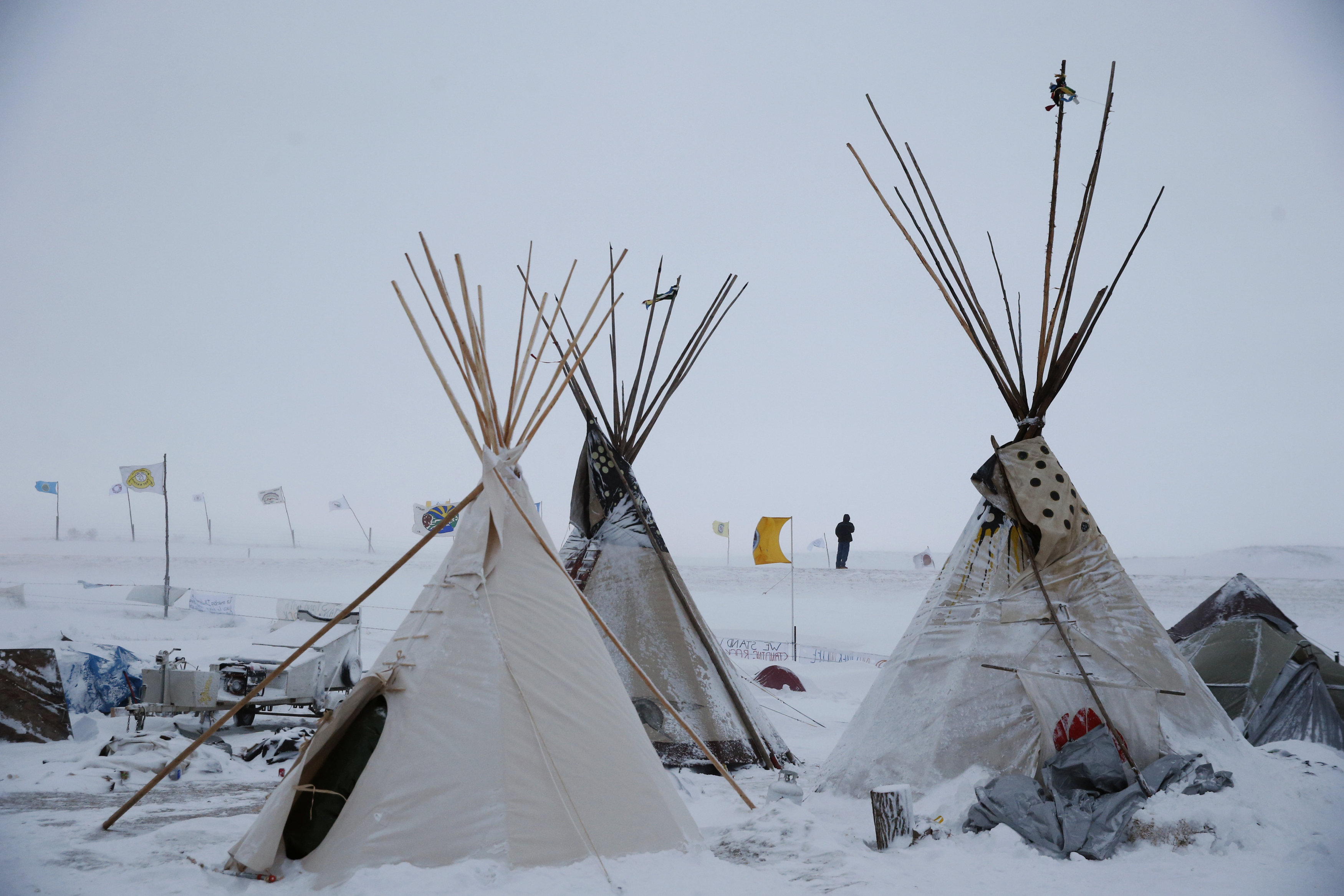 A man stands on Highway 1806 just outside of the Oceti Sakowin camp during a snow fall as “water protectors” continue to demonstrate against plans to pass the Dakota Access pipeline adjacent to the Standing Rock Indian Reservation, near Cannon Ball, North Dakota, U.S., December 5, 2016. REUTERS/Lucas Jackson

On Sunday, the U.S. Army Corps of Engineers rejected an application for the pipeline to tunnel under Lake Oahe, a reservoir formed by a dam on the Missouri River.

The Army Corps said it would analyze possible alternate routes, although any other route is likely to cross the Missouri River.

The camp celebrated the decision, but some expressed concern their victory could be short-lived.

“I think this is just a rest,” Charlotte Bad Cob, 30, of the Pine Ridge Reservation in South Dakota, said on Sunday. “With a new government it could turn and we could be at it again.”

On Monday, tribal leaders and hundreds of veterans walked to Backwater Bridge, one of the focal points of the protests, and offered prayers and chanted after the victory.

Several veterans said they had no plans to leave and suspected Sunday’s decision was a ruse to empty the camp. 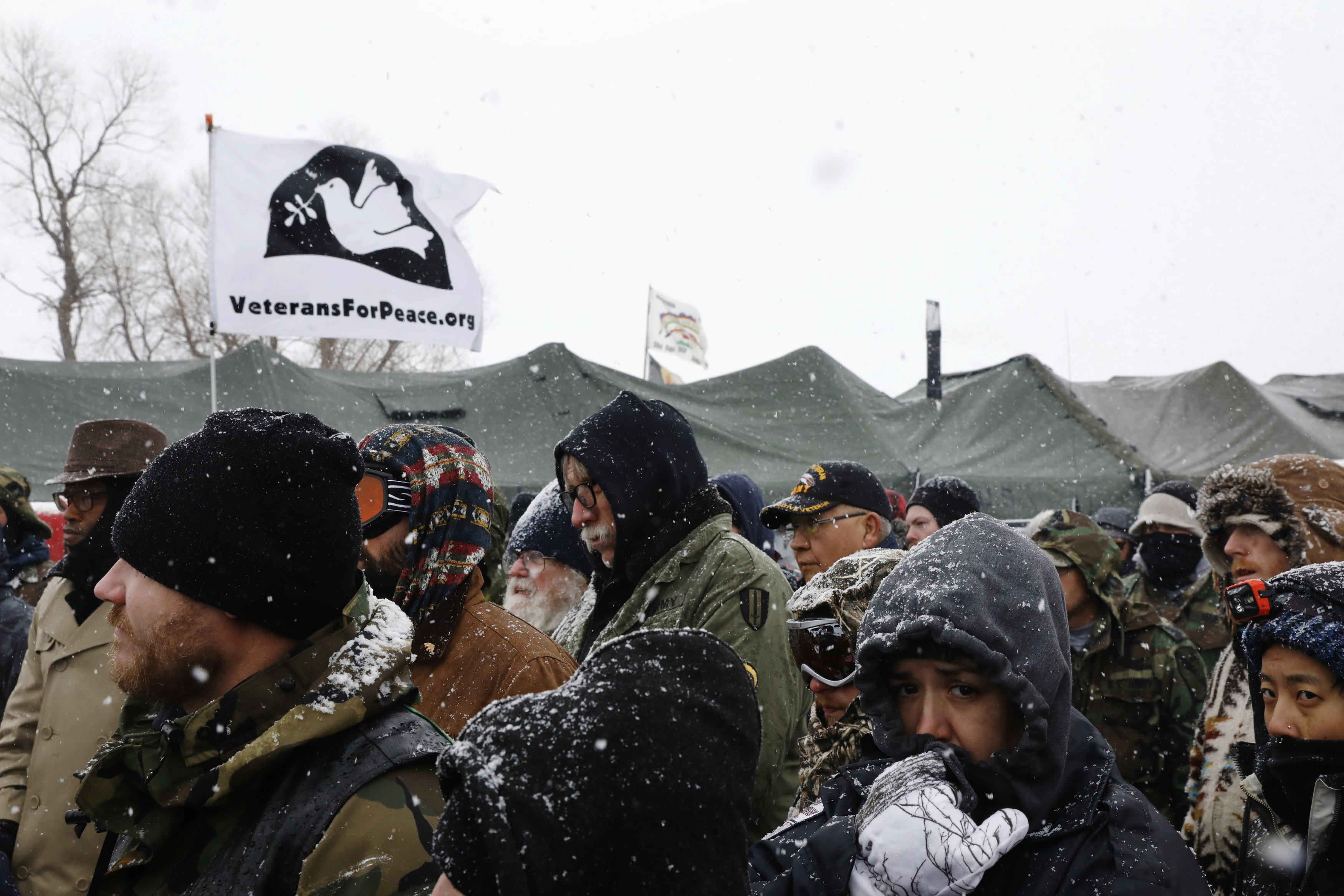 Veterans gather for a briefing inside of the Oceti Sakowin camp during a snow fall as “water protectors” continue to demonstrate against plans to pass the Dakota Access pipeline adjacent to the Standing Rock Indian Reservation, near Cannon Ball, North Dakota, U.S., December 5, 2016. REUTERS/Lucas Jackson

The company building the 1,172-mile (1,885-km) pipeline, Energy Transfer Partners, said late on Sunday that it had no plans to reroute the line, and expected to complete the project.

The Obama administration’s decision was a “political action”, ETP said in a joint statement on Sunday with its partner Sunoco Logistics Partners.

The pipeline is complete except for a 1-mile (1.61 km)segment that was to run under Lake Oahe, which required permission from federal authorities.

The chief executive of ETP, Kelcy Warren, donated to Trump’s campaign, while the president-elect has investments in ETP and Phillips 66, another partner in the project. 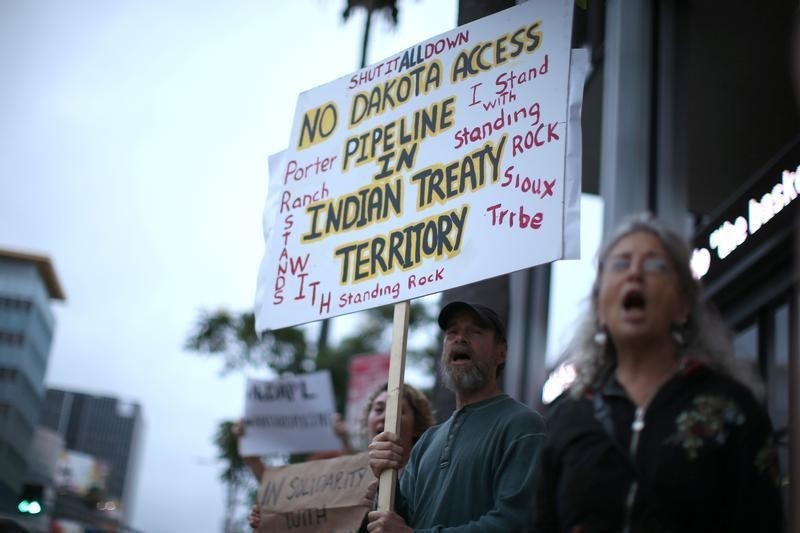 ATLANTA (Reuters) – Holding signs and banners and chanting “Oil Kills,” protesters in Atlanta and other U.S. cities on Tuesday shouted support for Native American activists trying to stop construction of a North Dakota pipeline they say will desecrate sacred land and pollute water.

The protests against the Dakota Access pipeline have drawn international attention, sparking a renewal of Native American activism and prompting the U.S. government to block its construction on federal land, even as the company building the line expressed its commitment to the project on Tuesday.

“We were all moved by the spirit to be here,” said Linda James Thomas, 59, who attended the Atlanta rally in support of the Georgia State Tribe of the Cherokee.

When fully connected to existing lines, the 1,100-mile (1,770 km), $3.7 billion pipeline would be the first to carry crude oil from the Bakken shale directly to the U.S. Gulf.

Protests were scheduled throughout the day in Atlanta, Washington, D.C., Los Angeles and numerous other cities. Previous demonstrations have drawn celebrities including actresses Shailene Woodley and Susan Sarandon, and on Tuesday U.S. Senator Bernie Sanders, a former Democratic U.S. presidential candidate, spoke at a rally in the nation’s capital.

“We cannot allow our drinking water to be poisoned so that a handful of fossil fuel companies can make even more in profits,” Sanders, flanked by activists in tribal dress and business suits, told the cheering crowd in Washington, D.C. 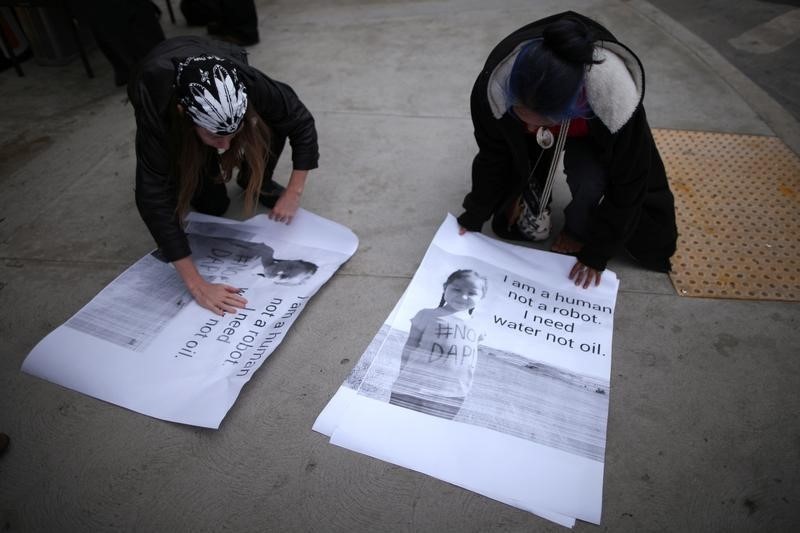 In Ohio, about 100 people gathered at a Cleveland intersection, some clutching bunches of sage and beating drums.

Tracey Hill, 46, a Cleveland resident who is one-eighth Cherokee, said she went last week to protest at the site of the pipeline project in North Dakota. “People are sick of being run roughshod over by corporations,” Hill said.

Activists took to social media to dub Tuesday’s rallies a national “Day of Action” against the pipeline. Many used the hashtag #NoDAPL to show their opposition.

Outside the United States, activists said on social media they planned protests in countries including Britain, Spain, South Korea and New Zealand.

Last week, the Obama administration, responding to the issues raised by the Standing Rock Sioux, whose land runs about a half-mile south of the pipeline’s route, said it would temporarily halt construction on federal land. Acting moments after a federal judge denied the tribe’s request for a halt to construction, the administration asked the company building it to refrain from construction on private land as well.

On Tuesday, Dallas-based Energy Transfer Partners, whose Dakota Access subsidiary is building the pipeline, said in a letter to employees it was committed to the project.

The letter did not address the federal request for a temporary halt of construction. But company officials said they would meet with government administrators.

“We are committed to completing construction and safely operating the Dakota Access Pipeline within the confines of the law,” Kelcy Warren, Energy Transfer Partners’ chairman and chief executive officer, said in the letter.

He dismissed as “unfounded” worries that oil would contaminate water in the Missouri and Cannon Ball rivers, and said the pipeline would address safety concerns connected with vehicle transport of oil.

“We have designed the state-of-the-art Dakota Access pipeline as a safer and more efficient method of transporting crude oil than the alternatives being used today, namely rail and truck,” he said.

In 2013, a runaway oil train in Canada crashed, killing 47 people, and in June 2016 a train carrying crude oil derailed and burst into flames in Oregon.

In coming weeks, the U.S. Army Corps of Engineers will review its initial decision to permit the pipeline and decide whether it correctly followed federal environmental law in granting permits.

Later this fall, the federal government will meet with Native American leaders to decide whether to reform its process for building infrastructure projects that will affect tribal lands.

In North Dakota, protesters have vowed to remain until the project is halted.