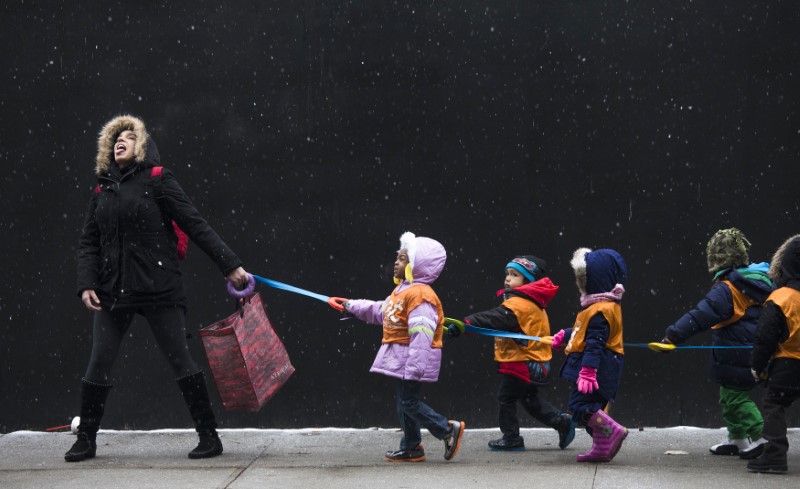 CHICAGO (Reuters) – Americans are not having enough babies.

The nation’s fertility rate hit a record low in 2017, and one has to wonder: Could the cost of raising children be discouraging a generation that was choked by the Great Recession?

Employment is strong, but pay has been stagnant. College student loans average $35,000, and renting or buying a home is unaffordable in most metro areas. Throw daycare costs of $10,000 a child into the mix, and families ask themselves: How can they afford a baby?

Childcare is the third-largest expense in the family budget, behind food and housing, according to the U.S. Department of Agriculture, which calculated last year that middle class families spend $233,610 raising a child to the age of 18.

“Daycare is a crisis and a much bigger problem than college,” says Betsey Stevenson, an associate professor of public policy at the University of Michigan, who wonders why there is not a massive public outcry for relief.

Both presidential candidates raised the issue in the last campaign, and Congress then doubled the child tax credit to $2,000.

But there has been no daycare legislation. Rather than organizing politically, it appears that 20- and 30-somethings are voting with their reproductive systems.

The only age group with a rising fertility rate in 2017 was women 40 to 44 years old, according to the National Center for Health Statistics. In addition, 20 percent of parents in a Care.com survey said they would have fewer children than they wanted because of childcare costs.

Lisa Anderson, 30, is among the stressed-out mothers. She commutes daily from a rural home to work at her government consulting job in downtown St. Paul, Minnesota, devoting a quarter of her family income to her 10-month-old son’s daycare.

She worries how she and her husband will afford a second child. Daycare for one baby costs close to $10,000; with two, it would total half of the couple’s take-home income.

With about $1,000 in monthly student loan payments, “I’m starting to regret what I spent on graduate school,” Anderson said. But she and others in her generation cannot undo past decisions, they can only control when and if they’ll have children.

For working parents, daycare costs are rising at almost twice the nation’s inflation rate since the recession.

Government guidelines suggest a ratio of 10 percent of income for childcare. But the median family with children under six earned $68,808 in 2016, about $20,000 short of making the median $8,320 annual daycare cost affordable, according to a Brookings Institute analysis of Census data.

Infant care at $10,400 is harsher, and the quality daycare preferred by people with incomes over $150,000 costs $11,652, according to Brookings analyst Grover Whitehurst. In expensive areas of the country, that goes up to $18,000 per child.

Nannies are even more costly – averaging about $28,905 a year nationally, according to Care.com. As a result, only about 4 percent of families use them, according to Census data.

Most parents have limited options for cutting costs other than drawing on help from family, sharing caregivers, compromising quality and having fewer children.

Some states offer subsidies, but most go to low-income people. Families get a little tax relief if they claim the Child and Dependent Care Tax Credit at tax time or use a flexible spending account at work to stash money away for childcare on a pre-tax basis.

Financial planners calm parents by telling them they can catch up with retirement and college saving after their children enter school.

But Rachel Brewer, a San Diego mother of three children between seven and nine, questions that. “Kids were the cheapest when babies. I spent $5 for a can of formula. Now, I sweat bullets every time I take the kids to the dentist,” she said.

(The opinions expressed here are those of the author, a columnist for Reuters.)