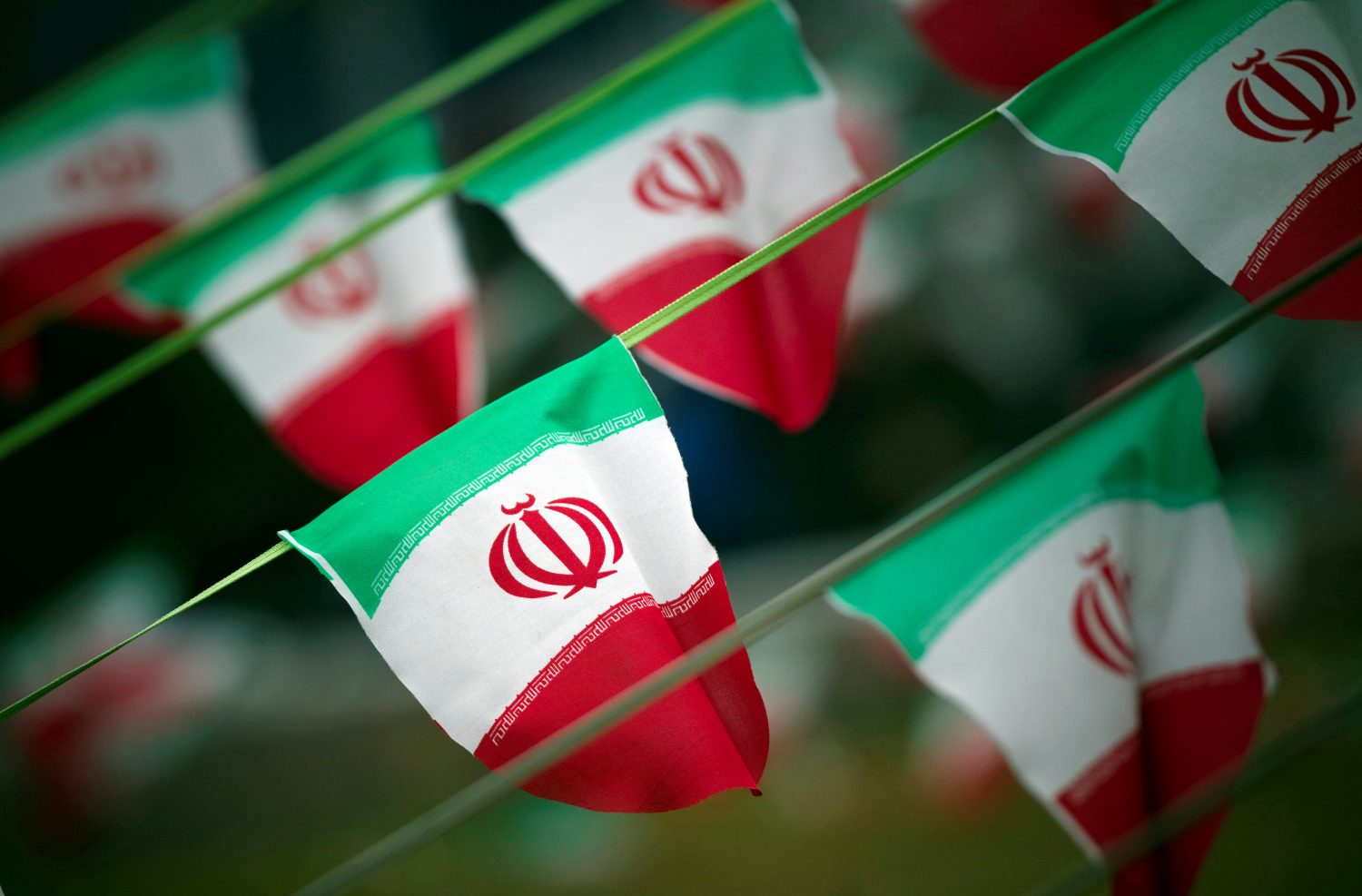 “A foreign vessel smuggling one million litres of fuel in the Larak Island of the Persian Gulf has been seized,” the station said, adding that the ship was seized on Sunday.

Iranian state TV earlier said the seized vessel was the same one Iran towed after it sent a distress call on Sunday, but there was no confirmation of this in the statement issued by the Revolutionary Guards about the impounded vessel.

The Guards, who have yet to name the vessel concerned, said they had seized no other ship in the Gulf.

Iranian navy vessels came to the assistance of a disabled foreign oil tanker in the Gulf that needed repairs, Iran’s foreign ministry spokesman was quoted as saying on Tuesday by the semi-official news agency ISNA. 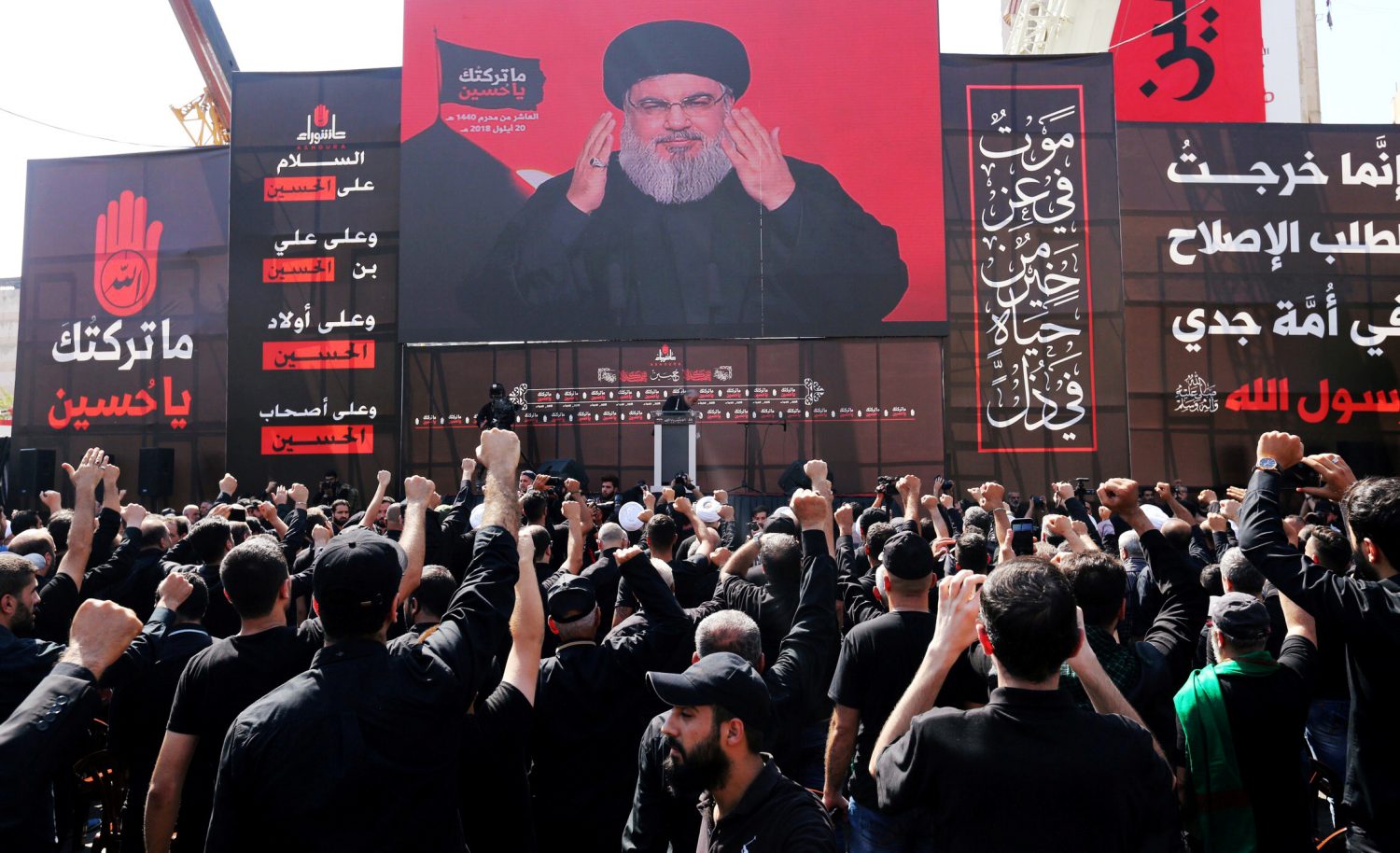 BEIRUT (Reuters) – Lebanon’s Hezbollah raised the prospect of retaliation by Iran and its allies over U.S. sanctions, saying on Wednesday that all options were on the table were Washington to take steps that “threaten our nation”.

Iran and its allies, which include Hezbollah, had so far made do with condemnation in response to the U.S. sanctions, said Nasrallah, before adding that this was “not a permanent and fixed policy”.

“There are measures which, if taken by the Americans … who said they will remain without response?” he said in a televised speech delivered to an event for Hezbollah’s wounded fighters.

“There will be an appropriate response for sure,” he said. Iran and its allies held “many strong cards”, he added.

Hezbollah was founded by the Revolutionary Guards in 1982 and has long been designated as a terrorist group by the United States. U.S. President Donald Trump’s administration has tightened sanctions against Hezbollah as part of its wider regional policy to counter Iran.

U.S. Secretary of State Mike Pompeo said on Wednesday that Trump would continue to increase pressure on Iran. 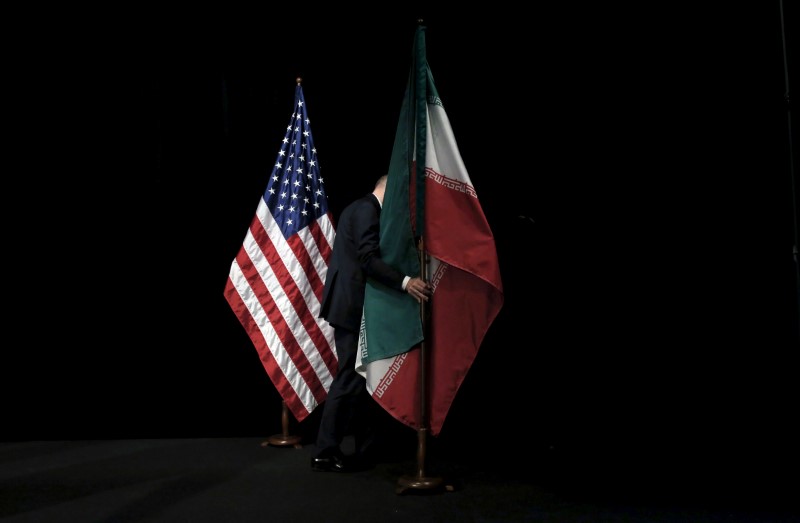 WASHINGTON (Reuters) – The United States believes Iran has started carrying out naval exercises in the Gulf, apparently moving up the timing of annual drills amid heightened tensions with Washington, U.S. officials told Reuters on Thursday.

One U.S. official, speaking on condition of anonymity, said possibly more than 100 vessels were involved in the drills, including small boats. A second official expected the drill could be wrapped up this week.

Iran has been furious over U.S. President Donald Trump’s decision to pull out of an international nuclear deal and reimpose sanctions on Tehran. Senior Iranian officials have warned the country would not easily yield to a renewed U.S. campaign to strangle Iran’s vital oil exports.

The U.S. military’s Central Command on Wednesday confirmed it has seen an increase in Iranian naval activity, including in the Strait of Hormuz, a strategic waterway for oil shipments that Iran’s Revolutionary Guards have threatened to block.

“We are monitoring it closely, and will continue to work with our partners to ensure freedom of navigation and free flow of commerce in international waterways,” said Navy Captain Bill Urban, the chief spokesman at Central Command, which oversees U.S. forces in the Middle East.

Central Command did not update its guidance on Thursday.

A third official said the Iranian naval operations did not appear to be affecting commercial maritime activity.

U.S. officials, speaking to Reuters on condition of anonymity, said the drills appeared designed to send a message to Washington, which is intensifying its economic and diplomatic pressure on Tehran but so far stopping short of using the U.S. military to more aggressively counter Iran and its proxies.

But Iran did not appear interested in drawing attention to them. Iranian authorities have yet to comment on them and several officials contacted by Reuters declined to comment.

Iran’s currency plumbed new depths this week ahead of Aug. 7, when Washington is due to reimpose a first lot of sanctions following Trump’s withdrawal from the 2015 nuclear deal.

Protests have broken out in Iran since the beginning of the year over high prices, water shortage, power cuts and alleged corruption.

On Tuesday, hundreds of people rallied in cities including Isfahan, Karaj, Shiraz and Ahvaz to protest high inflation caused in part by the weak rial. 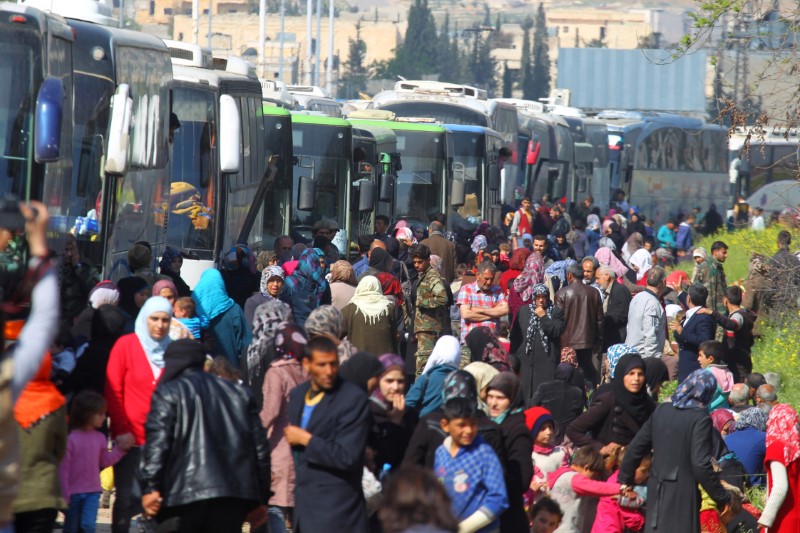 AMMAN (Reuters) – Syrian rebels and Iranian-backed negotiators have reached a deal to evacuate thousands of people from two rebel-besieged Shi’ite villages in northwest Syria in return for the release of hundreds of detainees in state prisons, opposition sources said.

They said the negotiators from Hayat Tahrir al-Sham, a rebel coalition spearheaded by Syria’s former al Qaeda offshoot Nusra Front, and Iran’s Revolutionary Guards had reached the secret deal, under which all residents would be evacuated from the mostly Shi’ite villages of al-Foua and Kefraya in Idlib province.

“An initial agreement has been reached but talks are ongoing,” said an Islamist rebel source familiar with the secret negotiations that Turkey was also involved in and which builds on a deal reached last year that was never fully implemented.

In April 2017 thousands of people in the two Shi’ite towns were evacuated to government-held areas in a swap deal that in exchange freed hundreds of Sunnis living in former rebel-held Madaya and Zabadani that were then besieged by Lebanon’s Iranian-backed Hezbollah group.

But the evacuation of the remaining 7,000 people in al-Foua and Kefraya in exchange for the release of 1,500 detainees prisoners never went through.

The resumption of talks now to complete the deal was to ward off a possible military campaign by the Syrian army and Iranian backed militias to end the siege of the two Shi’ite towns, another opposition source said.

“Over 1,500 civilian and rebel prisoners held in regime prisons will be released,” said an opposition source familiar with the talks told Reuters.

The deal also includes release of thirty four prisoners captured by Hezbollah during its siege of the Madaya and Zabadani.

There was no official word on the deal but state-owned Ikhabriyah television station said there were “reports of an agreement to liberate thousands from the two towns”.

Iran, which backs President Bashar al Assad against the mainly Sunni insurgents and has expanded its military role in the country, has long taken a interest in the fate of its co-religionists in the two-besieged towns.

It has arranged dozens of air lifts of food and equipment to circumvent the siege by rebels of the two towns.

Past deals have mostly affected Sunni Muslims living in former rebel-held areas surrounded by government forces and their allies after years of crushing sieges that have in some cases led to starvation. Damascus calls them reconciliation deals.

Rebels say it amounts to forced displacement of Assad’s opponents from Syria’s main urban centers in the west of the country, and engenders demographic change because most of the opposition, and Syria’s population, are Sunni.

But backed militarily by Russia and Shi’ite regional allies, Assad, a member of Syria’s Alawite minority, has negotiated the deals from a position of strength. 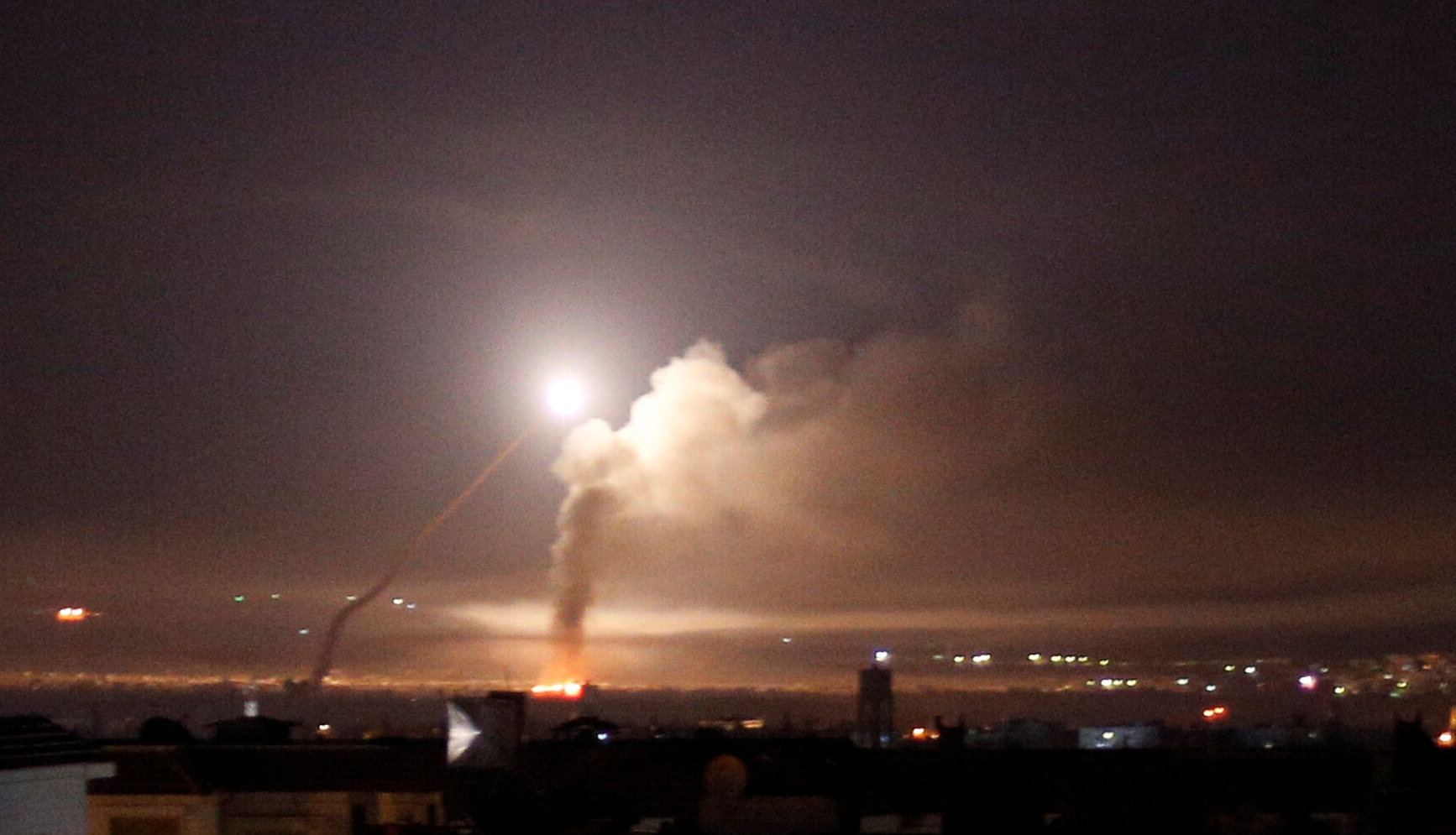 By Dan Williams and Angus McDowall

JERUSALEM/BEIRUT (Reuters) – Israel said it attacked nearly all of Iran’s military infrastructure in Syria on Thursday after Iranian forces fired rockets at Israeli-held territory for the first time.

It was the heaviest Israeli barrage in Syria since the start in 2011 of its war, in which Iranians, allied Shi’ite Muslim militias and Russian troops have deployed in support of President Bashar al-Assad.

The White House, in a statement, condemned Iran’s “provocative rocket attacks” from Syria and said it supported Israel’s right to defend itself.

Expectations of a regional flare-up, amid warnings from Israel that it was determined to prevent any Iranian military entrenchment in Syria, were stoked by U.S. President Donald Trump’s announcement on Tuesday that he was withdrawing from the 2015 nuclear deal between Iran and world powers.

The Trump administration portrayed its rejection of that agreement as a response, in part, to Iran’s military interventions in the Middle East, underpinning Israeli Prime Minister Benjamin Netanyahu’s tough line towards Tehran.

Israel said 20 Iranian Grad and Fajr rockets were shot down by its Iron Dome air defense system or did not reach targets in the occupied Golan Heights, territory captured from Syria in a 1967 war.

Iran and Israel were already drawing deeper into confrontation before Trump pulled the United States out of the deal, but his move has shaken up the region. Within Iran, it could empower hardliners while weakening the moderate camp that has sought better relations with the West.

“We hit … almost all of the Iranian infrastructure in Syria,” Israeli Defence Minister Avigdor Lieberman said at the annual Herzliya security conference near Tel Aviv. “I hope we finished this chapter and everyone got the message.”

Lieberman said the Iranian rockets either fell short of their targets – military bases in the Golan – or were intercepted.

The White House said: “The Iranian regime’s deployment into Syria of offensive rocket and missile systems aimed at Israel is an unacceptable and highly dangerous development for the entire Middle East.”

The Syrian foreign ministry said the Israeli attack indicated “the start of a new phase of aggression” against Damascus. 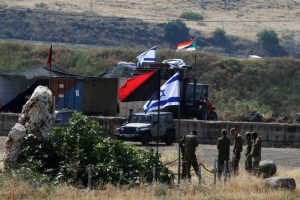 Israeli soldiers are seen in the Israeli-occupied Golan Heights, Israel May 10, 2018. REUTERS/Ronen Zvulun

Thursday’s exchange followed a suspected Israeli rocket strike in Syria on Tuesday on a military base in Kisweh, hours after Trump’s announcement on the nuclear deal.

The Syrian Observatory for Human rights said 15 people, including eight Iranians, were killed in that attack. A commander in the pro-Syrian government regional alliance said there were no casualties. Israel, as it has typically done in similar incidents, neither confirmed nor denied a role.

France urged Iran on Thursday to refrain from all “military provocation” and cautioned it against “all temptations for regional hegemony”.

Russia, which is generally friendly to Israel but fights in Syria’s civil war on the same side as Iran, called on both to show restraint and resolve differences through diplomatic means.

He said the military focused on inflicting “long-term damage on the Iranian military establishment in Syria” and assessed “it will take a substantial time to replenish”.

Russia’s defense ministry said Syria had shot down more than half of the missiles fired by Israel, RIA news agency reported.

In the Golan, Israeli schools opened as usual on Thursday morning after sirens sent residents to shelters overnight.

The Israelis fear that Iran and its Lebanese ally Hezbollah are turning Syria into a new front against them. Israel says its occasional strikes in Syria aim to prevent such an outcome.

Iran vowed retaliation after a suspected Israeli air strike last month killed seven of its military personnel at a Syrian air base. Israel regards Iran as its biggest threat and has repeatedly targeted Iranian forces and allied militia in Syria.