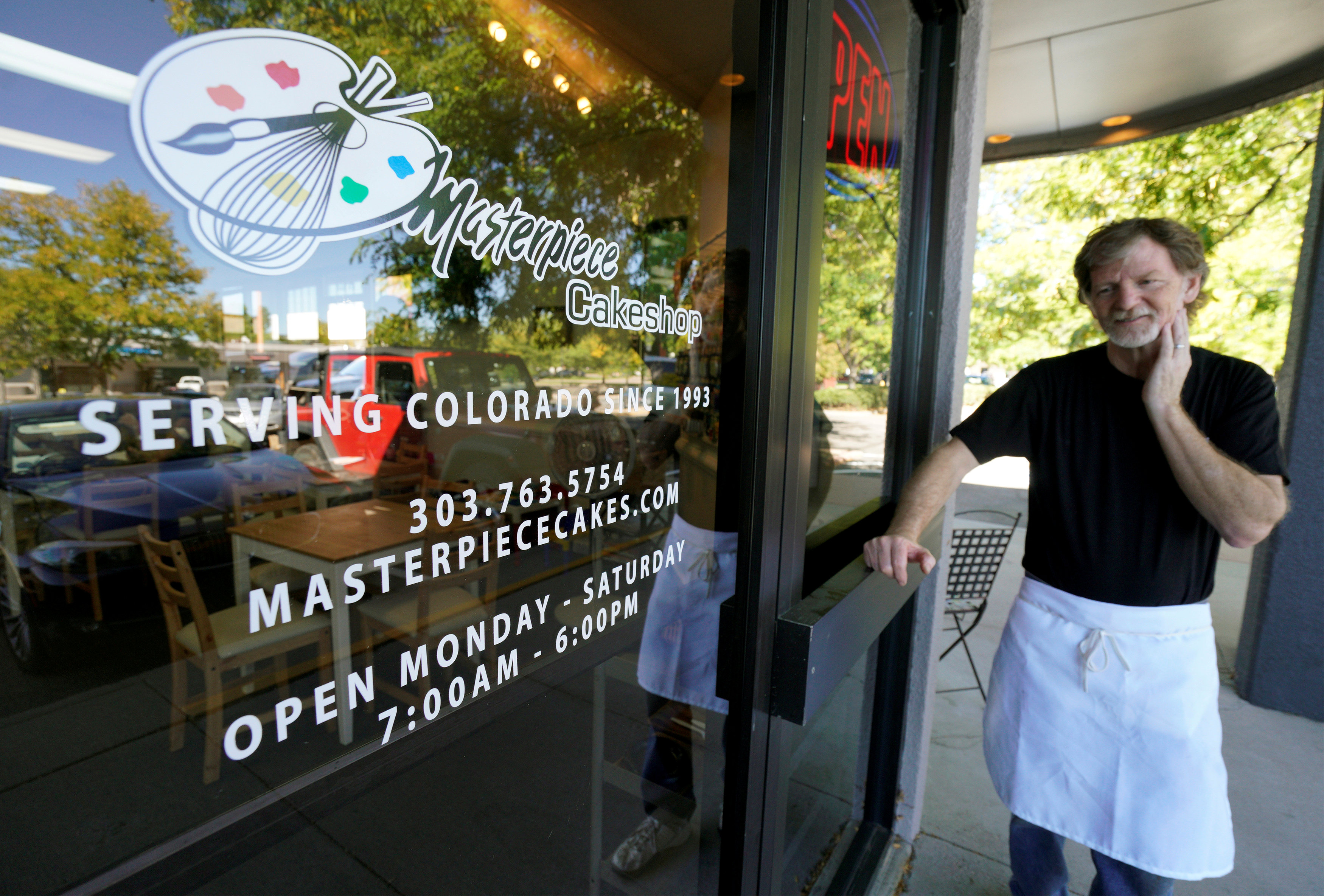 WASHINGTON (Reuters) – When conservative Christian baker Jack Phillips in 2012 politely but firmly told Colorado gay couple David Mullins and Charlie Craig he would not make them a cake to celebrate their wedding, it triggered a chain of events that will climax on Tuesday in highly anticipated U.S. Supreme Court arguments.

Phillips contends the U.S. Constitution’s free speech guarantees protect him from making a cake that would violate his religious beliefs against gay marriage. To Mullins and Craig, the baker’s refusal represented a simple case of unlawful discrimination based on sexual orientation.

In one of the biggest cases of the conservative-majority court’s nine-month term, the justices — just two years after legalizing gay marriage — must decide whether Phillips’ action was constitutionally protected and he can avoid punishment for violating Colorado anti-discrimination law.

A ruling favoring Phillips could open the door for certain businesses to spurn gay couples by invoking religious beliefs, as some wedding photographers, florists and others already have done.

The brief encounter at Phillips’ Masterpiece Cakeshop in the Denver suburb of Lakewood left Mullins and Craig distraught. They filed a successful complaint with the Colorado Civil Rights Commission, the first step in the five-year-old legal battle that the nine justices will resolve in a ruling due by the end of June.

The baker’s lawyers argue that because his cakes are artistic endeavors, guarantees of freedom of speech and expression enshrined in the U.S. Constitution’s First Amendment protect Phillips from being forced to make baked creations that express a message he opposes on religious grounds.

Mullins and Craig were planning their wedding in Massachusetts that September and wanted the cake for a reception to be held in Colorado, where gay marriage was not yet legal. Craig’s mother witnessed the tense exchange, which he said made it harder for him to bear.

“I ended up starting to cry because I felt really bad and overwhelmed that my mom had to see me go through this. I guess it was the feeling of helplessness,” Craig said in an interview.

Phillips said he offered to sell the couple other products in his store but was adamant that his religious beliefs compelled him to draw a line when it comes to certain issues.

Based on his Christian beliefs, Phillips said he also refuses to make Halloween cakes as well as baked goods “that denigrate other people.”

The civil rights commission found that Phillips violated state anti-discrimination law that bars businesses from refusing service based on race, sex, marital status or sexual orientation. It ordered him to take remedial measures including staff training and the filing of quarterly compliance reports.

Phillips said he found the penalty “deeply offensive” in part because until recently his mother was one of his employees.

“I have to tell my mom, ‘Everything you have taught me doesn’t count here,'” Phillips said.

In 2015, the Colorado Court of Appeals also ruled against Phillips. The Colorado Supreme Court subsequently denied his appeal, prompting Phillips to take the case to the top U.S. court.

Evangelical Christians are an important part of President Donald Trump’s political base, and his administration filed a brief in support of Phillips.

The case puts 81-year-old Justice Anthony Kennedy, one of the court’s five conservative, in the spotlight. Kennedy, a potential deciding vote in a 5-4 ruling, has joined the court’s liberals in major decisions on issues such as abortion and gay rights. He authored the court’s landmark 2015 decision that legalized same-sex marriage nationwide. But Kennedy is also a strong proponent of free speech rights.

The case has become a cultural flashpoint in the United States that underscores the tensions between gay rights proponents and conservative Christians.

Similar cases are being litigated in other U.S. courts, and other countries also are confronting the issue. In April, Britain’s Supreme Court will consider whether a Christian-run bakery in Northern Ireland can refuse to make a cake backing gay rights.

In this case and others involving such issues as abortion, union dues and campaign funding, conservatives have relied on free speech arguments before the Supreme Court, but the issue of religious liberty still looms large.

“This is about will the U.S. Supreme Court decide that the fundamental freedoms and liberties that Americans have taken for granted for 200 years are still valid,” said Phillips’ lawyer, Kristen Waggoner.

The ACLU said a ruling favoring Phillips could lead to other efforts to skirt anti-discrimination laws.

“They are asking for a constitutional right to discriminate,” ACLU lawyer Louise Melling said. “This is not a case about a cake. It is a case about a very radical proposition.”

Mullins and Craig did get to celebrate their marriage with a cake made by another bakery. Phillips will once again encounter them on Tuesday, this time in the grand marble halls of the Supreme Court.