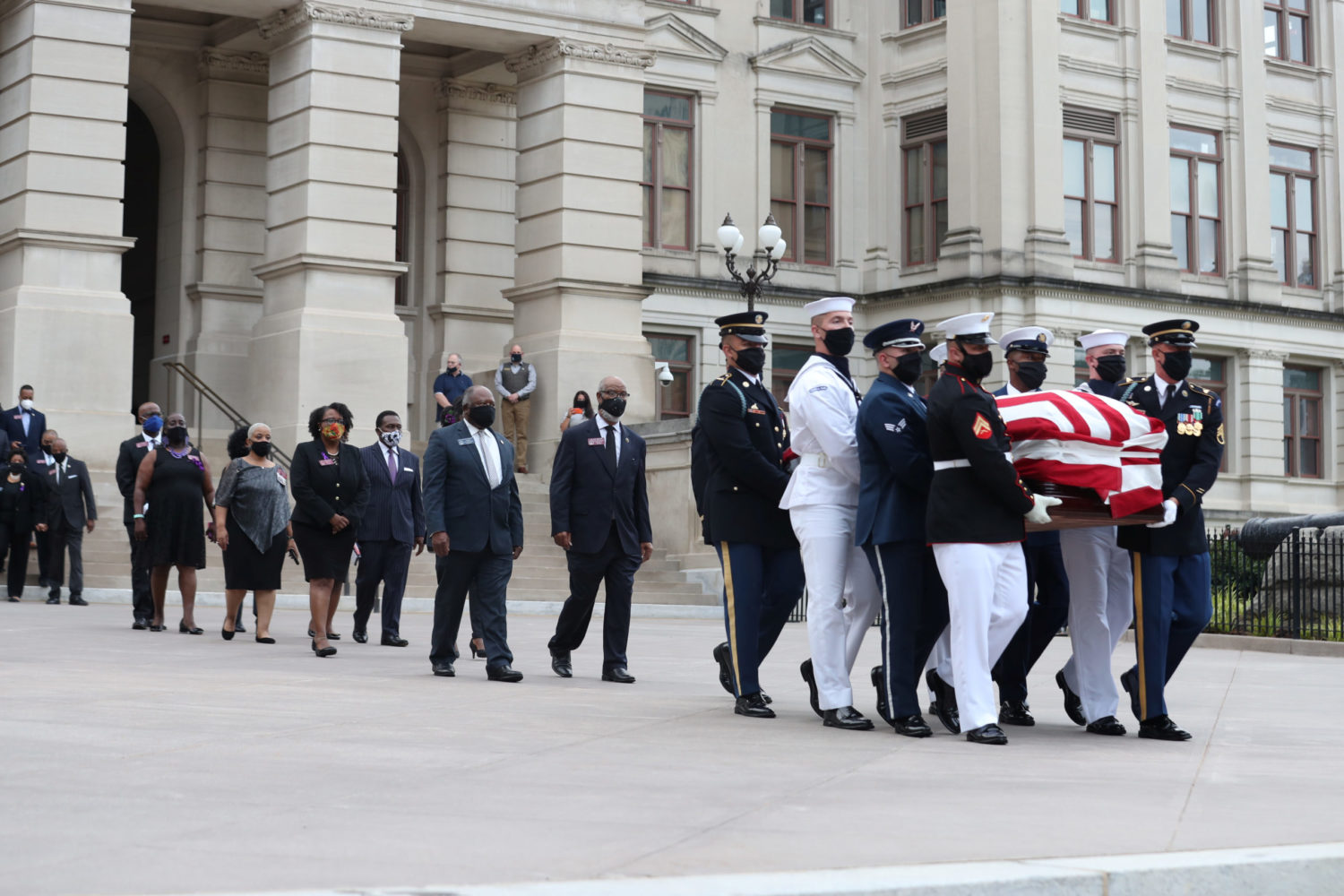 ATLANTA (Reuters) – More than 1,000 people gathered outside a historic Atlanta church to pay their last respects to longtime U.S. Representative John Lewis as former presidents praised the civil rights pioneer at his funeral on Thursday.

Former Presidents George W. Bush and Bill Clinton both spoke of Lewis’s humble beginnings on a farm in Troy, Alabama, to becoming a leader of the Black civil rights movement and ultimately the man known as the “conscience of Congress.”

They spoke in front of the American flag-draped casket bearing Lewis’ body at Ebenezer Baptist Church, where the Reverend Martin Luther King Jr. Once preached. King, a mentor to Lewis in the civil rights struggle, was assassinated in 1968.

“We live in a better and nobler country today because of John Lewis,” said Bush, who remembered joining Lewis in Selma, Alabama, for the 50th anniversary of the watershed march across the Edmund Pettus Bridge. “The story that began in Troy isn’t ending here today, nor is the work.”

Lewis, an Alabama sharecropper’s son who strove for equality for Blacks in an America grappling with racial bigotry and segregation, was a fiercely determined champion of nonviolent protest and was inspired by King.

Lewis was first elected in 1986 to represent Georgia in the U.S. House of Representatives. His death came at a time of reckoning across the United States over racial injustice, with widespread protests condemning unequal police treatment of Black Americans and institutions removing or renaming tributes to former leaders of the pro-slavery Confederacy.

The funeral follows a week of memorial services.

The coffin bearing his body was escorted across the Edmund Pettus Bridge on Sunday, decades after his beating there drew a national spotlight to the struggle for racial equality. And on Monday his casket was taken to the U.S. Capitol in Washington where it lay in state through Tuesday.

Nathan Knight, 73, a retired building contractor, said he came to the funeral to honor a man he met as a young boy in 1958, joined in marches over the years, and was present when Obama awarded Lewis the Presidential Medal of Freedom in 2011.

“The reason why it’s important for me to be here is because he has been a teacher, a leader and a mentor to me,” Knight said outside the church, where more than a thousand people had gathered, some watching the service on a large TV screen outside. “I can vote today because of him, because of him and Dr. King.”

In an essay written shortly before his death and published in the New York Times on Thursday, Lewis called on the nation to come together for justice and equality.

“When historians pick up their pens to write the story of the 21st century, let them say that it was your generation who laid down the heavy burdens of hate at last and that peace finally triumphed over violence, aggression and war,” Lewis wrote. “So I say to you, walk with the wind, brothers and sisters, and let the spirit of peace and the power of everlasting love be your guide.”

(Reporting by Rich McKay in Atlanta and Nathan Layne in Wilton, Connecticut; editing by Jonathan Oatis)