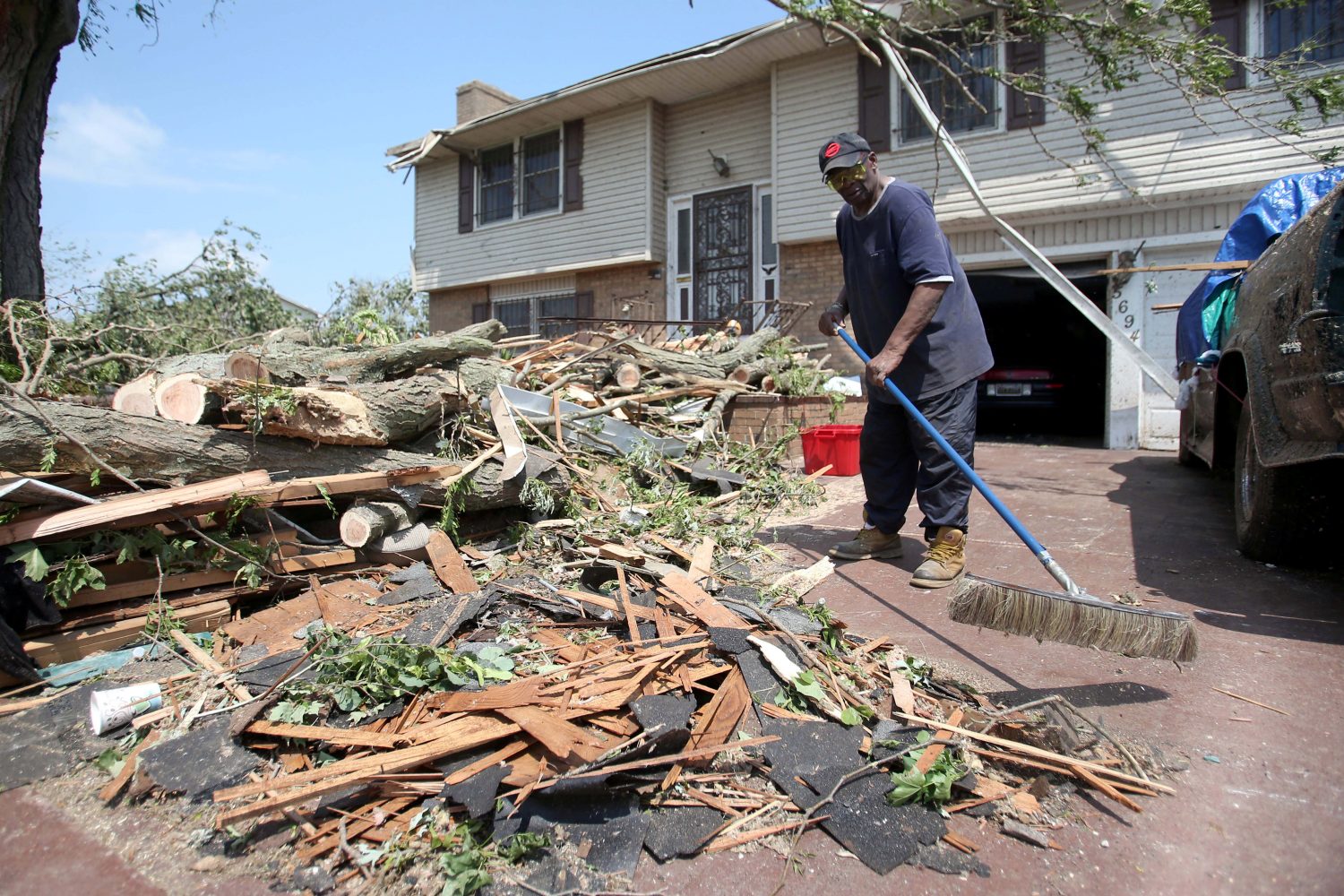 About 20 tornadoes, including a large rain-wrapped twister near Kansas City, were reported to the NWS by storm chasers and spotters as news broadcast images of roofs torn off homes and roads scattered with debris and tree limbs.

“The house took a pretty good beating … but the main thing is that we are all safe,” homeowner Brian Perry told 41 Action News in Kansas City. “It was pretty wild, never been through anything like it in my life.”

The extent of the damage was unclear and there were no reports of fatalities or injuries.

The Kansas City International Airport said on Twitter that travelers found shelter in parking garage tunnels as the storms passed by the airfield. The airport later said it was closed as crews cleared debris.

The latest wave of tornadoes came a day after a spate of twisters pulverized buildings in western Ohio, killing one person, injuring scores and triggering a recovery effort in neighborhoods strewn with wreckage.

An 81-year-old man was killed in Celina, a small city 65 miles (105 km) north of Dayton, after a tornado sent a vehicle crashing into his home, Mayor Jeffrey Hazel told a news conference.

More than 300 tornadoes have ravaged the U.S. Midwest in the last two weeks, during an unusual onslaught of extreme weather.

The tornado in Celina, which touched down late on Monday, was at least an EF3 on the Enhanced Fujita Scale, packing wind speeds of 136 mph to 165 mph (219 kph to 266 kph), said Patrick Marsh, a meteorologist at the federal Storm Prediction Center.

The storm injured seven people in Celina, three of them seriously, Hazel said, and about 40 homes there were seriously damaged or destroyed.

Two tornadoes categorized as EF3 or stronger also struck late on Monday near Dayton, including one just south of Wright-Patterson Air Force Base, Marsh said. An EF3 is just two scales lower than the most intense tornado possible, an EF5.

Damaged property is seen after a tornado in Lawrence, Kansas, U.S. in this still from a video taken May 28, 2019 obtained from social media. LOUIS CORTEZ /via REUTERS

Sue Taulbee, 71, was watching television in her bed in the Dayton suburb of Brookville when she heard an approaching twister.

“They say it’s like a freight train: That’s what I heard,” she recalled on Tuesday afternoon. She hid at the foot of the bed. Flying debris smashed her window and she was soon trapped as her home collapsed around her.

“It was only a couple of minutes, but it seemed like an hour,” she said as she sat in her yard, surrounded by her scattered possessions.

They pulled her out through a hole and brought her to a hospital to treat a cut on her head, she said.

After the twisters, Ohio Department of Transportation crews used snow plows to clear highways of debris.

The risk of more tornadoes continued into the night on Tuesday in some Midwest states and the mid-Atlantic states of Pennsylvania, New Jersey and southern New York, Marsh said.

Nearly 80 people in and around Dayton went to hospitals with injuries, said Elizabeth Long, a spokeswoman for the Kettering Health Network.

“We’ve had injuries ranging from lacerations to bumps and bruises from folks being thrown around in their houses due to the storms,” Long said.

The flurry of hundreds of tornadoes that has recently struck the Midwest was caused by the interaction of moisture from the Gulf of Mexico, a strong jet stream and a weather front that has been locked in place, said Alex Lamers, a meteorologist with the federal Weather Prediction Center. 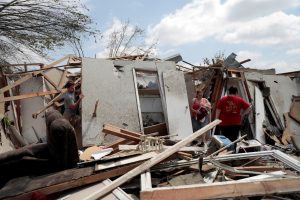 Joseph Taulbee, 21, Allyson Smith, 25, and Danielle,Taulbee, 24, work to collect memorabilia from their grandmother’s damaged house after a tornado touched down overnight in Brookville, near Dayton, Ohio, U.S. May 28, 2019. REUTERS/Kyle Grillot

Nearly 55,000 homes and businesses in Ohio were without power on Tuesday, according to the PowerOutage.US tracking service, and officials advised people to boil water after water plants and pumps halted.

The latest storm follows tornadoes and floods that killed at least three people in Missouri and six people in Oklahoma during the previous week, including two in El Reno on Saturday.

Unexpected pipeline outages and refinery shutdowns over the past week – in part caused by bad weather in the U.S. Midwest – have roiled cash markets for both crude oil and refined products, traders said.

(This story corrects dateline and name of Dayton suburb in paragraph 12 to Brookville, not Brookline)