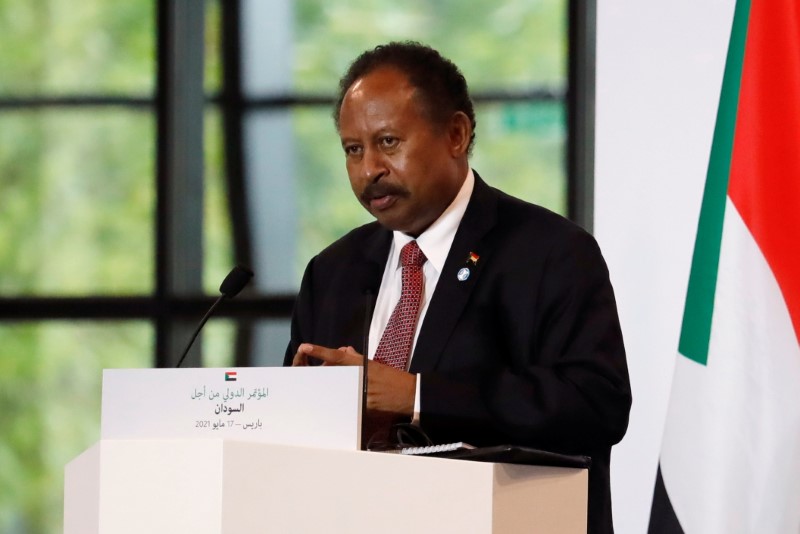 KHARTOUM (Reuters) – Sudan’s prime minister warned on Tuesday of the risk of chaos and civil war fomented by loyalists of the previous regime as he sought to defend reforms meant to pull the country out of a deep economic crisis and stabilize a political transition.

Abdalla Hamdok made the comments in a televised address days after young men carrying clubs and sticks blocked roads in the capital Khartoum following the removal of fuel subsidies.

The transition is meant to last until the end of 2023, leading to elections.

“The deterioration of the security situation is mainly linked to fragmentation between components of the revolution, which left a vacuum exploited by its enemies and elements of the former regime,” Hamdok said.

He said that without reform of Sudan’s sprawling security sector, which expanded under Bashir as he fought multiple internal conflicts, Sudan will continue to face internal and external threats.

“These fragmentations can lead us to a situation of chaos and control by gangs and criminal groups, just as it can lead to the spread of conflict among all civilian groups and might lead to civil war.”

Though Sudan has won international praise for economic reforms since Bashir’s fall and has made progress towards debt relief, many Sudanese face food shortages or have struggled to make ends meet as prices have soared over the past year.

Inflation hit 379% in May and electricity or water outages occur daily.

While roadblocks have often been used in protests triggered by economic or political grievances since 2018, a Reuters witness saw more aggression around the barriers set up in recent days.

The state government said police and prosecutors would deal with what it called the gangs involved in blocking the roads, but there appeared to be little police presence on the streets.

Congregants of the Church of Christ in the Thiba Al Hamyida area of Khartoum stood by helplessly as Sudanese government officials destroyed their church building.

A church member told CNN that the government came in during Sunday mass and said they would be destroying the building.  About 70 security personnel, some armed with guns and tear gas, used a bulldozer to destroy the building.

“They wanted to beat us or throw tear gas on us,” the church member said.

Reverend Kwa Shamal told the Morning Star News that government officials made it clear they were to not ask questions about why they were destroying the church. The government also gave no compensation to the church for the destruction of their building.

The pastor said the church’s congregation will meet in a tent this Sunday.

In an interview with British newspaper The Guardian, persecuted Christian Meriam Ibrahim says her newborn daughter is physically handicapped because she was forced to give birth with her legs shackled to a wall.

Ibrahim, who is currently seeking refuge inside the U.S. Embassy in Khartoum, gave her first interview after being released from her incarceration on charges of apostasy and adultery.

Ibrahim said that she was shackled with chains, not cuffs, and that her legs were forced together by the chains.  The guards would not release the chains so that she could open her legs for the birth and her daughter’s legs were injured during the birth.

“I couldn’t open my legs so the women had to lift me off the table,” Ibrahim told the Guardian.  “I wasn’t lying on the table.”

Ibrahim said it wasn’t clear yet if the child will need help walking as she grows older because of the injuries.

Sudan is forcing Ibrahim to stay in the country claiming she forged her papers to leave.  Ibrahim told the Guardian that she has a document from South Sudan because that is where her husband is from and that is proper under international law.  The family has visas to enter the United States when she is able to leave the country.

Meriam Ibrahim, the Christian woman who had been facing the death penalty on charges that she converted from Islam because her father was a Muslim, is reportedly in hiding at the U.S. Embassy in Khartoum while she and her family attempt to leave the country.

Ibrahim had been arrested attempting to leave the country a day after her death sentence was overturned because Sudanese officials say she was using her Christian name on travel documents rather than her Islamic name and had documents from South Sudan rather than Sudan.

Ibrahim was reportedly released on the charges related to her attempt to leave the country on the grounds that she not leave Sudan.

A spokeswoman for the U.S. State Department says it’s entirely up to the Sudanese government to say when Ibrahim can leave the country.  Marie Harf said that the State Department confirmed Ibrahim has all the correct documents to leave Sudan according to international law.

A BBC report says that Ibrahim’s arrest was made by members of the National Intelligence and Security Service that was unhappy with Ibrahim’s release from her death sentence.  The arrest was reportedly a way to send a message to the rest of the Sudanese government.