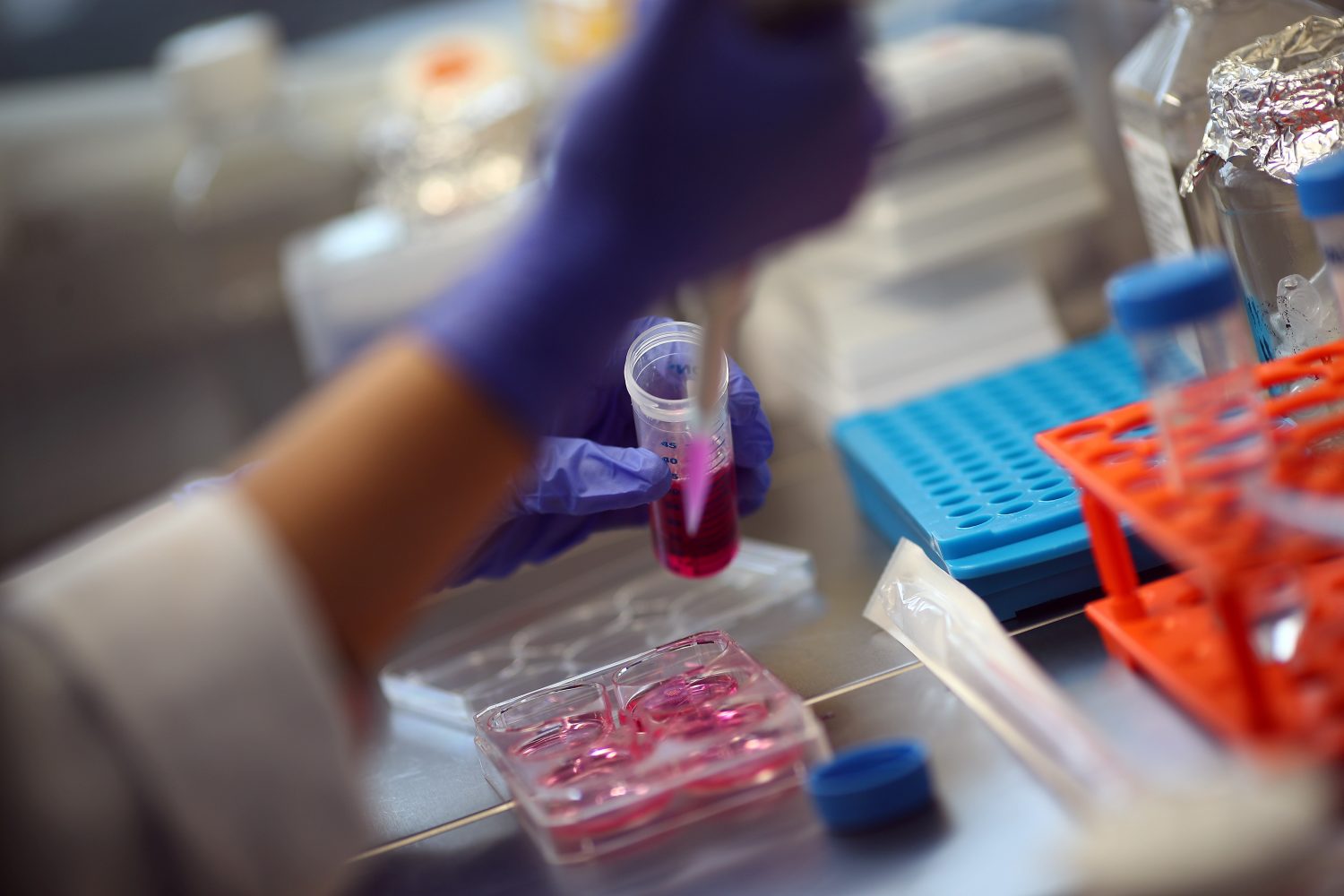 MUNICH (Reuters) – Researchers in Germany have created transparent human organs using a new technology that could pave the way to print three-dimensional body parts such as kidneys for transplants. 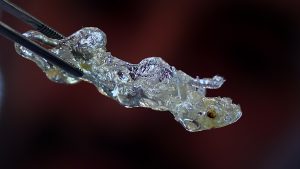 A transparent mouse is pictured at the laboratory of Dr. Ali Ertuerk, Group Leader at the Institute for Stroke and Dementia Research (ISD) at the Ludwig Maximillian’s University, in Munich, Germany April 23, 2019. Mr. Ertuerk and his team developed DISCO transparency technology which is used by scientists from diverse biomedical research fields to generate high resolution views of intact rodent organs and bodies, a milestone on the way to generate 3D-bioprinted human organs. REUTERS/Michael Dalder

Scientists led by Ali Erturk at Ludwig Maximilians University in Munich have developed a technique that uses a solvent to make organs such as the brain and kidneys transparent.

The organ is then scanned by lasers in a microscope that allows researchers to capture the entire structure, including the blood vessels and every single cell in its specific location.

Using this blueprint, researchers print out the scaffold of the organ. They then load the 3D printer with stem cells which act as “ink” and are injected into the correct position making the organ functional.

While 3D printing is already used widely to produce spare parts for industry, Erturk said the development marks a step forward for 3D printing in the medical field.

Until now 3D-printed organs lacked detailed cellular structures because they were based on images from computer tomography or MRI machines, he said.

“We can see where every single cell is located in transparent human organs. And then we can actually replicate exactly the same, using 3D bioprinting technology to make a real functional organ,” he said. 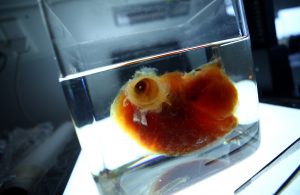 A transparent human brain is shown by Dr. Ali Ertuerk at his laboratory in Munich, Germany April 23, 2019. Mr. Ertuerk and his team developed DISCO transparency technology which is used by scientists from diverse biomedical research fields to generate high resolution views of intact rodent organs and bodies, a milestone on the way to generate 3D-bioprinted human organs. Picture taken April 23, 2019. REUTERS/Michael Dalder

“Therefore, I believe we are much closer to a real human organ for the first time now.”

Erturk’s team plan to start by creating a bioprinted pancreas over the next 2-3 years and also hope to develop a kidney within 5-6 years.

The researchers will first test to see whether animals can survive with the bioprinted organs and could start clinical trials within 5-10 years, he said. 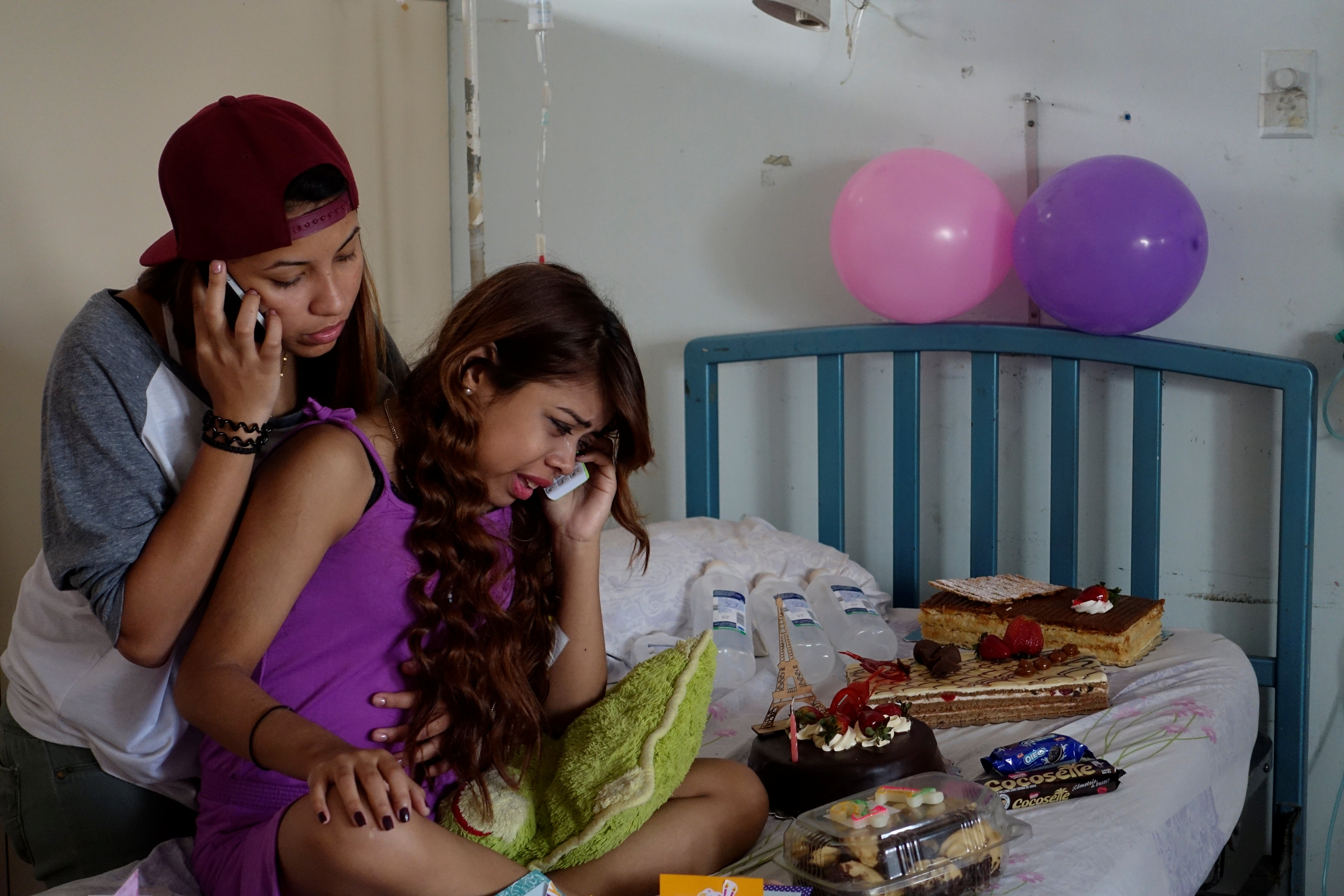 CARACAS (Reuters) – Yasmira Castano felt she had a fresh chance at life when she received a kidney transplant almost two decades ago. The young Venezuelan was able to finish high school and went on to work as a manicurist.

But late last year, Castano, now 40, was unable to find the drugs needed to keep her body from rejecting the organ, as Venezuela’s healthcare system slid deeper into crisis following years of economic turmoil.

On Christmas Eve, weak and frail, Castano was rushed to a crumbling state hospital in Venezuela’s teeming capital, Caracas. Her immune system had attacked the foreign organ and she lost her kidney shortly afterwards.

Now, Castano needs dialysis three times a week to filter her blood. But the hospital attached to Venezuela’s Central University, once one of South America’s top institutions, frequently suffers water outages and lacks materials for dialysis.

“I spend nights not sleeping, just worrying,” said Castano, who weighs around 77 pounds (35 kg), as she lay on an old bed in a bleak hospital room, its bare walls unadorned by a television or pictures.

“Unfortunately, I could die,” said Castellanos, who lost her transplanted kidney last year and is struggling to get the dialysis she needs to keep her body functioning.

The women are among Venezuela’s roughly 3,500 transplant recipients. After years leading normal lives, they now live in fear as Venezuela’s economic collapse under President Nicolas Maduro has left the once-prosperous OPEC nation unable to purchase sufficient foreign medicine or produce enough of its own.

Some 31 Venezuelans have seen their bodies start to reject their transplanted organs in the last month due to lack of medicine, according to umbrella health group Codevida, a non-governmental organization.

At least seven have died due to complications stemming from organ failure in the last three months.

A further 16,000 Venezuelans, many hoping for an elusive transplant, are dependent on dialysis to clean their blood – but here too, resources and materials are sorely lacking.

Nearly half of the country’s dialysis units are out of service, according to opposition lawmaker and oncologist Jose Manuel Olivares, a leading voice on the health crisis who has toured dialysis centers to assess the scale of the problem.

In the last three weeks alone, seven people have died due to lack of dialysis, according to Codevida, which staged a protest to decry the critical drug shortages.

Once-controlled diseases like diphtheria and measles have returned, due partly to insufficient vaccines and antibiotics, while Venezuelans suffering chronic illnesses like cancer or diabetes often have to forgo treatment.

Hundreds of thousands of desperate Venezuelans, meanwhile, have fled the country over the past year, including many medical professionals.

Amid a lack of basics like catheters and crumbling hospital infrastructure, doctors who remain struggle to cope with ever scarcer resources.

“It’s incredibly stressful. We request supplies; they don’t arrive. We call again and they still don’t arrive. Then we realize it’s because there aren’t any,” said a kidney specialist at a public hospital, asking to remain anonymous because health workers are not allowed to speak publicly about the situation.

Venezuela’s Social Security Institute, tasked with providing patients with drugs for chronic conditions, did not respond to a request for comment.

“STRAIGHT TO THE CEMETERY”

Terrified transplant patients are indebting themselves to buy pricey medicine on the black market, begging relatives abroad to funnel drugs into the country or dangerously reducing their daily intake of pills to stretch out stock.

Guillermo Habanero and his brother Emerson both underwent kidney transplants after suffering polycystic kidney disease. Emerson, a healthy 53-year-old former police officer, died in November after a month without immunosuppressants.

“If you lose your kidney, you go to dialysis but there are no materials. So you go straight to the cemetery,” said Habanero, 56, who runs a small computer repair shop in the poor hillside neighborhood of Catia.

A Reuters reporter went to the Health Ministry to request an interview, but was asked at the entrance to give her contact details instead. No one called or emailed.

Reuters was also unable to contact the Health Ministry unit in charge of transplants, Fundavene, for comment. Its website was unavailable. Multiple calls to different phone numbers went unanswered. An email bounced back and no one answered a message on the unit’s Facebook page.

Maduro’s government has said the real culprit is an alleged U.S.-led business elite seeking to sabotage its socialist agenda by hoarding medicine and imposing sanctions.

“I see the cynicism of the right-wing, worried about people who cannot get dialysis treatment, but it’s their fault: they’ve asked for sanctions and a blockade against Venezuela,” Socialist Party heavyweight Diosdado Cabello said in recent comments on his weekly television program.

Health activists blame what they see as Maduro’s inefficient and corrupt government for the medical crisis and contend that government announcements of more imports for dialysis are totally insufficient.

Despite his unpopularity, Maduro is expected to win a new six-year term in an April 22 presidential election. The opposition is likely to boycott the vote, which it has already denounced as rigged in favor of the government.

Maduro has refused to accept food and medicine donations, despite the deepening healthcare crisis. Health activists and doctors smuggle in medicines, often donated by the growing Venezuelan diaspora, in their suitcases, but it is far from enough.

In the decaying hospital and dialysis center visited by Reuters, patients clamored for humanitarian aid.

Dolled up for her birthday and surrounded by cakes, the 21-year-old Castellanos took selfies with her friends and spoke excitedly about one day returning to dance, one of her passions.

But fears for her future permeated the room. A hospital worker stopped by to wish Castellanos many more birthday celebrations but her worried face betrayed doubts.

“Other countries need to help us,” Castellanos said.

The lead singer of the Christian worship band Casting Crowns has been released from the hospital after emergency surgery to remove a kidney because of cancer.

Now, Mark Hall’s wife Melanie is revealing that the cancer in question has been called “extremely aggressive” by doctors and that it was a “miracle” it was found before it could spread to other parts of Mark’s body.

“Praise the Lord! We are heading home! Wahoo! Mark turned a corner yesterday and had a good night last night. We think we’ve figured out how to manage his pain at home. He had his first meal today since chips and salsa last Monday night. Time to head to the house,” wrote Melanie in a post shared on the band’s Facebook page on Monday.

“The pathology report confirms that the tumor was indeed kidney cancer but it was fully encased. The findings of the report confirm that the cancer had not spread to the kidney or anywhere else. Glory Hallelujah! It was found in the earliest stage possible. For those of you that are more familiar with these type reports, it was labeled stage T1a,” said Melanie.

Melanie went on to say that the cancer was at a “nuclear level 3 cell type” meaning that it was ready to spread in the body but because it was encased it couldn’t get out.

She says that it’s a pure move of God that put the pieces in place to save Mark’s life.

In what’s being called a major advancement in organ generation, scientists in the U.S. have “grown” a kidney in a laboratory that was transplanted into an animal and has produced urine.

The researchers are Massachusetts General Hospital say the generation of a functioning rat kidney have resulted in the first steps toward creating useful human kidneys. END_OF_DOCUMENT_TOKEN_TO_BE_REPLACED