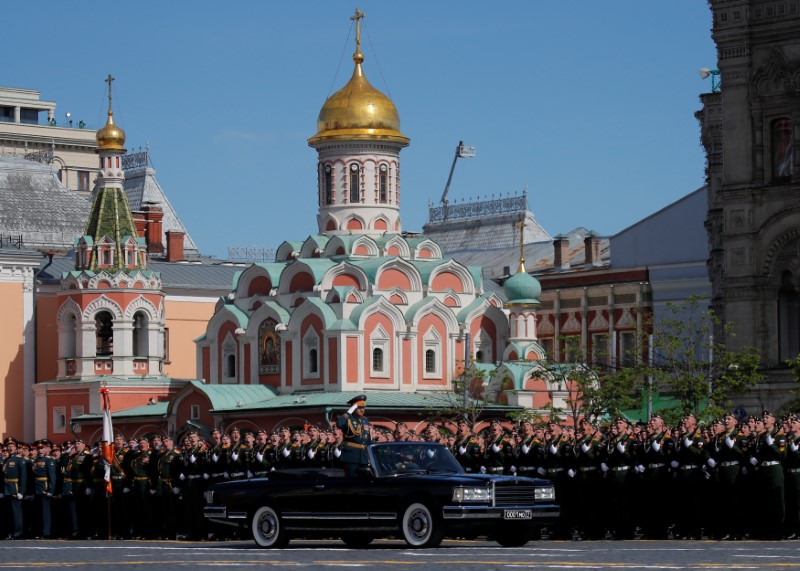 By Christian Lowe and Andrew Osborn

MOSCOW (Reuters) – Russia’s Vladimir Putin watched advanced jets carrying a hypersonic missile he has touted as invincible scream over Red Square on Wednesday, days after the start of his fourth presidential term. 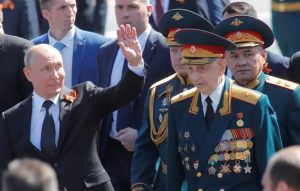 Part of an annual event marking the Soviet Union’s World War Two victory over the Nazis, Putin looked on as thousands of troops marched past him and columns of tanks rumbled across the famous square in a show of military might reminiscent of those displayed during the Cold War.

Putin reviewed the parade from a tribune packed with Soviet war veterans, some of whom wore rows of campaign medals and clutched red roses. Israeli Prime Minister Benjamin Netanyahu, in Moscow for talks on Syria, was also present, as was Serbian President Aleksandar Vucic. Hollywood actor Steven Seagal, who was given a passport by Putin in 2016, was also a guest.

The authorities, backed by state media, use the event to boost patriotic feeling and show the world and potential buyers of military hardware how a multi-billion dollar modernization program is changing the face of the Russian military.

Putin, whose relations with the West are on a hostile trajectory, has said he does not want an arms race while warning potential enemies that his country has developed a new generation of invincible weapons to protect itself just in case.

“We remember the tragedies of the two world wars, about the lessons of history which do not allow us to become blind. The same old ugly traits are appearing along with new threats: egoism, intolerance, aggressive nationalism and claims to exceptionalism,” Putin told the parade.

“We understand the full seriousness of those threats,” added Putin, who complained about what he said were unacceptable attempts to rewrite history while saying Russia was open to talks on global security if they helped keep world peace. 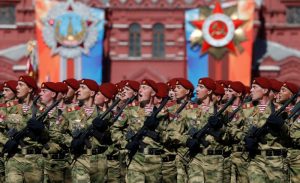 Russian servicemen march during the Victory Day parade, marking the 73rd anniversary of the victory over Nazi Germany in World War Two, at Red Square in Moscow, Russia May 9, 2018. REUTERS/Sergei Karpukhin

Putin has sharply increased military spending over the 18 years he has dominated Russian politics, handed the Russian military significant policy-making clout, and deployed Russian forces in Ukraine and Syria, stoking tensions with the West.

As commander-in-chief, he has also at times donned military uniform himself and been filmed at the controls of a strategic bomber and on the conning tower of a submarine in photo opportunities designed to boost his man of action image. 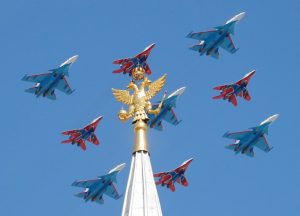 Russian army MiG-29 jet fighters of the Strizhi (Swifts) and Su-30 jet fighters of the Russkiye Vityazi (Russian Knights) aerobatic teams fly in formation during the Victory Day parade, marking the 73rd anniversary of the victory over Nazi Germany in World War Two, in central Moscow, Russia May 9, 2018. REUTERS/Maxim Shemetov

The first public outing of the Kinjal (Dagger) hypersonic missile, carried by advanced MiG-31K interceptor jets, was one of several world premieres for Russian weapons.

Putin disclosed the Kinjal’s existence in March along with other missile systems he touted as unbeatable, describing how it could evade any enemy defenses.

Russian media have said it can hit targets up to 2,000 km (1,250 miles) distant with nuclear or conventional warheads and that the missiles have already been deployed in Russia’s southern military district.

Russia’s most advanced fifth generation Su-57 stealth fighter, which has undergone testing in Syria, also took part in the parade for the first time, as did an unmanned armored reconnaissance and infantry support vehicle, the Uran-9.

Armed with a 30mm automatic cannon, a machine gun, anti-tank missiles and a rocket launcher, it looks like something out of a Hollywood science fiction film.

An unmanned de-mining vehicle, the Uran-6, was also put on show, as were Russia’s latest military drones and an armored vehicle designed to support tanks on the battlefield dubbed “The Terminator” by its maker.

The Moscow parade was one of many which took place across Russia on Wednesday involving a total of 55,000 troops, 1,200 weapons systems and 150 war planes in 28 Russian cities.

Some politicians in former Soviet republics and satellite states regard the parade as crude sabre-rattling by a resurgent Russia they say poses a threat to Europe’s security. Russia dismisses such allegations as nonsense.