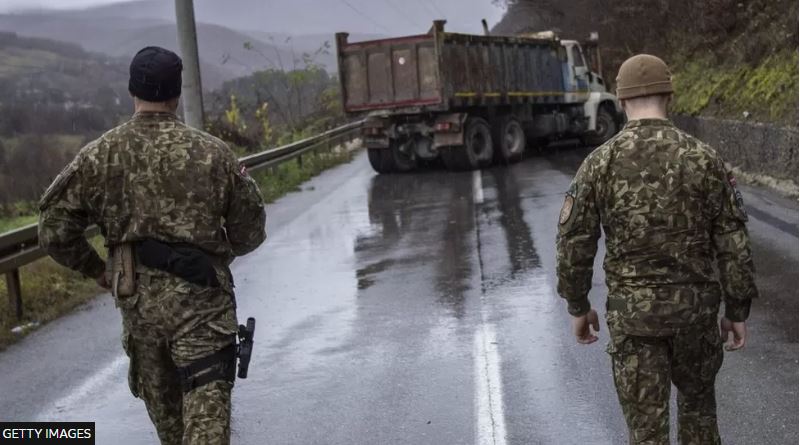 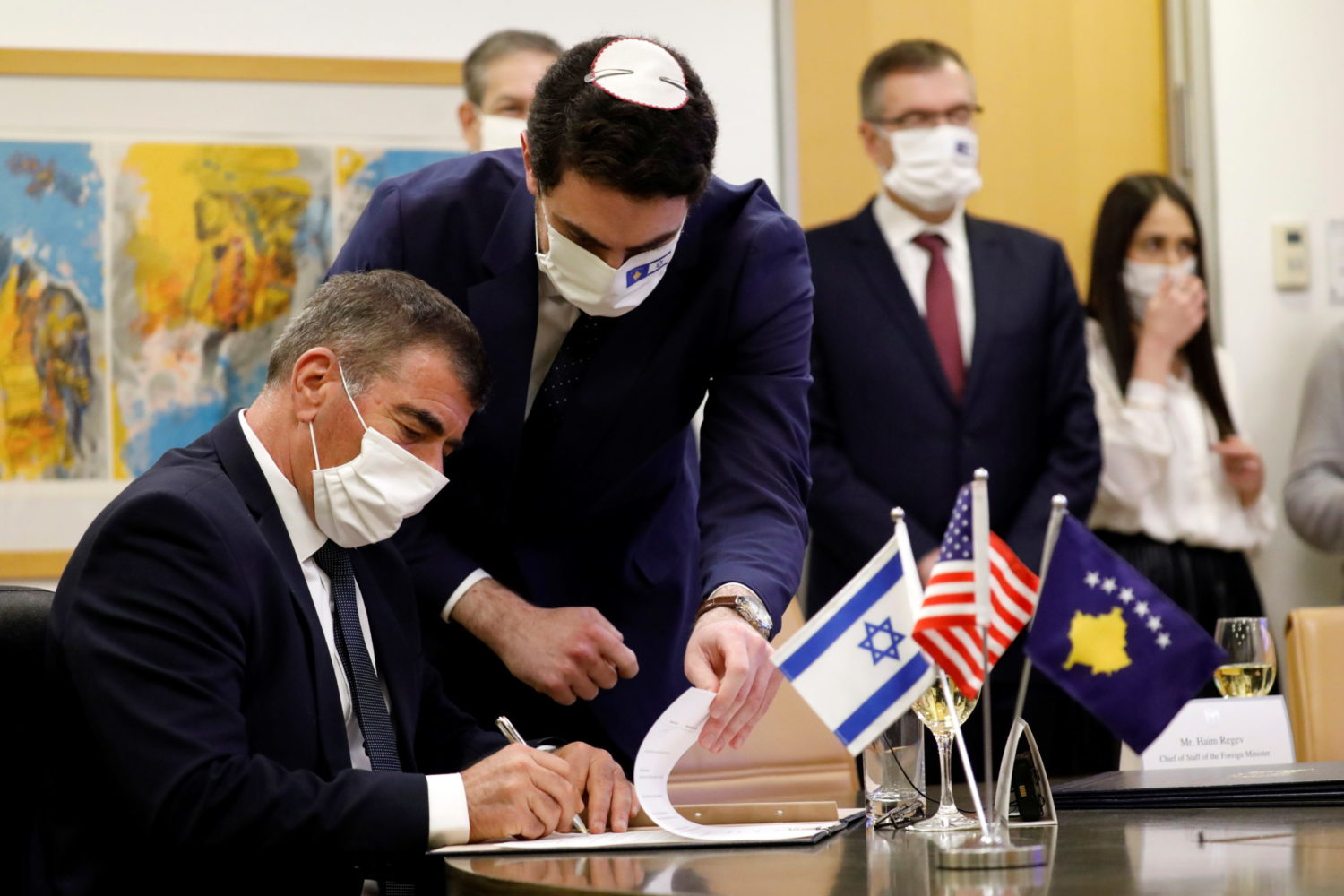 JERUSALEM (Reuters) – Israel and Kosovo established diplomatic relations on Monday, via online links due to the coronavirus crisis, under a U.S.-brokered deal that includes a pledge by the Muslim-majority country to open an embassy in Jerusalem.

Israel sees its new ties with the tiny Balkan country as part of its broader normalization with Arab and Muslim countries under agreements sponsored by former U.S. President Donald Trump.

Trump announced the two countries’ ties in September as a side deal to an economic agreement between Kosovo and Serbia. As part of the deal, Serbia, which has ties with Israel, also agreed to open an embassy in Jerusalem.

During a signing ceremony held via Zoom video conference, Israeli Foreign Minister Gabi Ashkenazi said the new ties were “historic” and “reflect a change in the region, and in the Arab (and) Muslim world’s relationship with Israel.”

Ashkenazi said he had received an official request from Kosovo to establish a Jerusalem embassy, which Israeli officials hope will open by end-March.

Only two countries – the United States and Guatemala – have embassies in Jerusalem. Others, including Malawi and Honduras, have pledged to make the move.

The ceremony included the unveiling of a commemorative plaque that will be placed at the entrance to Kosovo’s embassy in Jerusalem upon opening, Israel’s foreign ministry said.

Kosovo Foreign Minister Meliza Haradinaj-Stublla said Kosovo and Israel share a “historic bond” and had both “witnessed a long and challenging path to existing as a people and becoming states.”

Kosovo declared independence from Serbia in 2008, almost a decade after a guerrilla uprising by its ethnic Albanian majority.

Haradinaj-Stublla said she had spoken in recent days with U.S. Secretary of State Antony Blinken, who she said voiced President Joe Biden’s support for Kosovo’s new relations with Israel and economic agreement with Serbia. 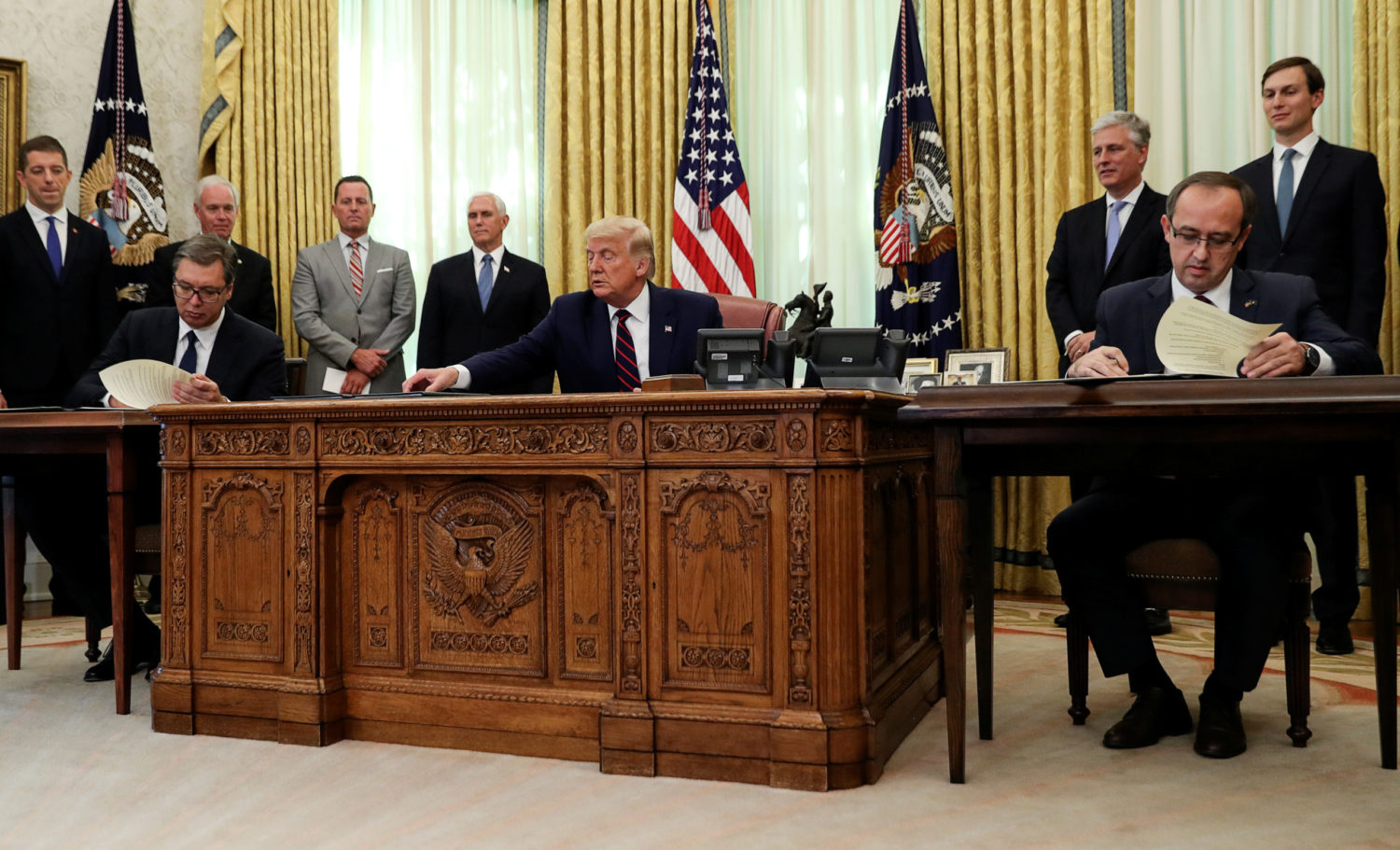 WASHINGTON (Reuters) – Serbia and Kosovo have agreed to normalize economic ties, U.S. President Donald Trump said on Friday, hailing what he called a “major breakthrough” more than a decade after Kosovo declared independence from Serbia in 2008.

Trump, speaking in the Oval Office with the leaders of both countries, said Serbia had also committed to moving its embassy to Jerusalem, and Kosovo and Israel had agreed to normalize ties and establish diplomatic relations.

Serbian President Aleksander Vucic told reporters there were still many differences between Serbia and the breakaway province, but said Friday’s agreement marked a huge step forward.

“Serbia and Kosovo have each committed to economic normalization,” Trump said. “By focusing on job creation and economic growth, the two countries were able to reach a major breakthrough.”

The announcement came after two days of high-level talks among the leaders and senior Trump aides, and follows close on the heels of last month’s historic agreement between Israel and the United Arab Emirates to normalize ties.

Ethnic Albanian-majority Kosovo declared independence from Serbia in 2008 after a NATO-led bombing campaign to curtail ethnic warfare. Serbia, backed by its large Slavic and Orthodox Christian ally Russia, does not recognize Kosovo’s independence, a precondition for Belgrade’s future membership in the European Union.

National Security Adviser Robert O’Brien, who participated in the meetings, said the agreement on expanding economic ties could pave the way for political solutions in the future.

A top EU official on Monday said EU-led negotiations, which broke down in 2018 but resumed in July, could lead to a deal within months.

The U.S. talks were previously set for June but delayed after Kosovo President Hashim Thaci was indicted for alleged war crimes during the 1998-99 guerrilla uprising against Serbian rule and its aftermath. He has denied the charges.

The Medicus Clinic in the Kosovo capital of Pristina reportedly lured in extremely poor people with promises of money and then took their kidneys and other organs for transplants into rich foreigners according to court testimony. END_OF_DOCUMENT_TOKEN_TO_BE_REPLACED