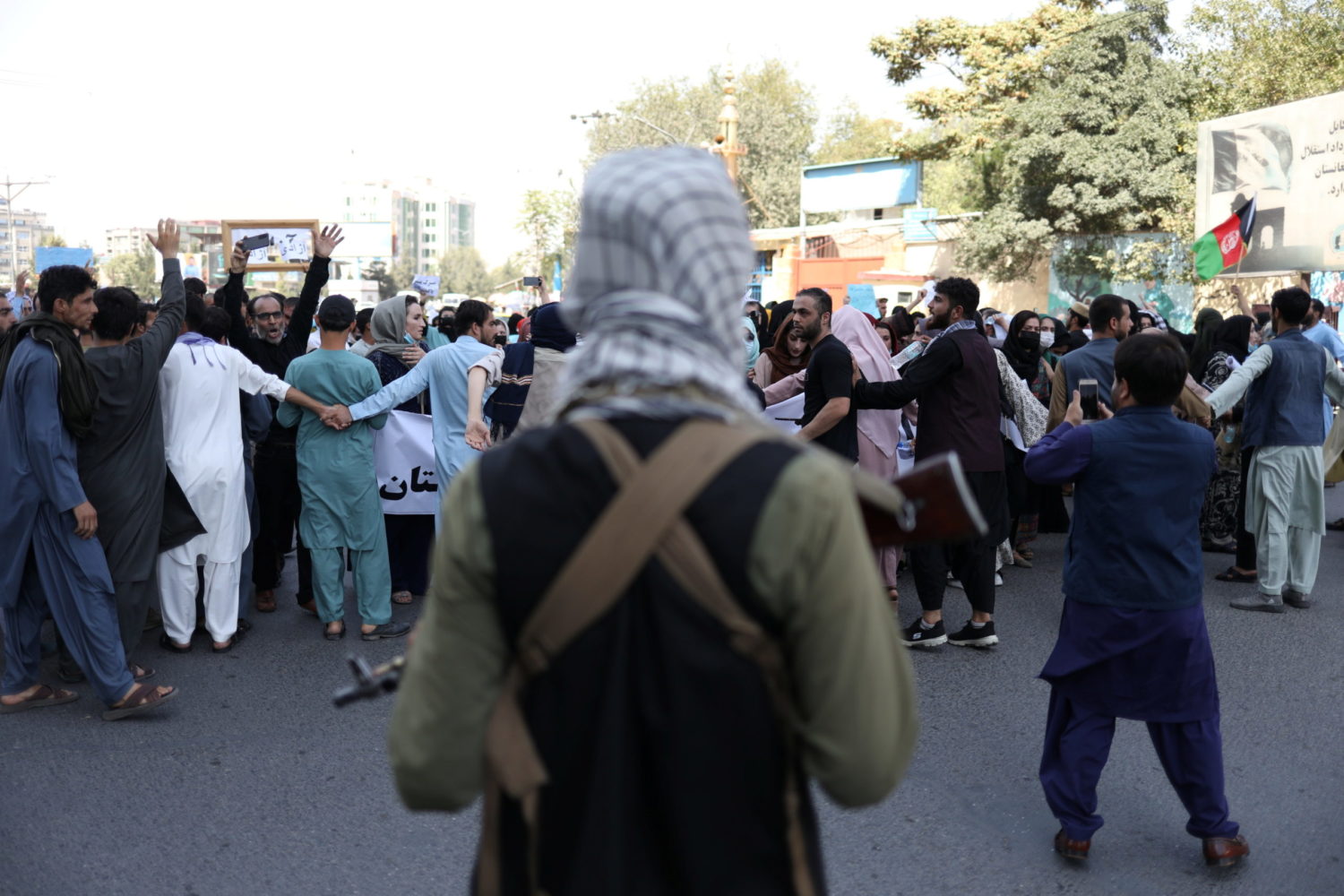 (Reuters) – Taliban gunmen fired in the air on Tuesday to scatter protesters in the Afghan capital Kabul, witnesses said, as video showed scores scurrying to escape volleys of gunfire.

Hundreds of men and women shouting slogans such as “Long live the resistance” and “Death to Pakistan” marched in the streets to protest against the Taliban takeover. Neighboring Pakistan has deep ties with the Taliban and has been accused of assisting the Islamist group’s return to power – charges it denies.

“The Islamic government is shooting at our poor people,” one panic-stricken woman on the street says over sounds of gunfire in a video clip shown on Iranian television news. There were no immediate reports of injuries, however.

The Taliban’s rapid advance across Afghanistan as U.S. forces pulled out last month triggered a scramble to leave by people fearing reprisals.

U.S.-led foreign forces evacuated about 124,000 foreigners and at-risk Afghans, but tens of thousands were left behind.

Secretary of State Antony Blinken said the United States was in contact with about 100 Americans who were still in Afghanistan.

About 1,000 people, including Americans, have been stuck in the northern city of Mazar-i-Sharif for days awaiting clearance for charter flights to leave, an organizer told Reuters, blaming the delay on the U.S. State Department.

Blinken, holding talks in Qatar, a key interlocutor with the Taliban, said the problem was one of documents.

“My understanding is that the Taliban have not denied exit to anyone holding a valid document, but they have said those without valid documents, at this point, can’t leave,” he told reporters.

“Because all of these people are grouped together, that’s meant that flights have not been allowed to go … We are not aware of anyone being held on an aircraft, or any hostage-like situation.”

At the same news conference, Qatari Foreign Minister Sheikh Mohammed bin Abdulrahman Al Thani said no deal had yet been reached with the Taliban on how Qatar and its partner Turkey could get Kabul airport running again.

“We hope in the next few days we can get to a level where the airport is up and running for passengers and for humanitarian aid as well,” he said.

Turkey says it wants to provide security inside the airport to protect any Turkish staff and safeguard operations, but that the Taliban have insisted no foreign forces can be present.

On Monday, the Islamist militants claimed victory in the Panjshir valley, the last province holding out against it, and promised to name a government soon.

Pictures on social media showed Taliban members standing in front of the Panjshir governor’s compound after days of fighting with the National Resistance Front of Afghanistan (NRFA), commanded by Panjshiri leader Ahmad Massoud.

Massoud denied that his force, consisting of remnants of the Afghan army as well as local militia fighters, was beaten.

“We are in Panjshir and our resistance will continue,” he tweeted. He said he was safe but did not say where.

The Taliban have repeatedly sought to reassure Afghans and foreign countries that they will not return to the brutality of their last reign two decades ago, marked by violent public punishments and the barring of women and girls from public life.

But more than three weeks after seizing Kabul, they have yet to set out their plans.

Asked whether Washington would recognize the Taliban, U.S. President Joe Biden told reporters at the White House on Monday: “That’s a long way off.”

Teachers and students at universities in Afghanistan’s largest cities – Kabul, Kandahar and Herat – told Reuters that female students were being segregated in class with curtains, taught separately or limited to some campus areas.

“Putting up curtains is not acceptable,” Anjila, a 21-year-old female student at Kabul University, said by telephone, adding that women had sat apart from males in classrooms before the Taliban took over, but without barriers.

“I really felt terrible when I entered the class … We are gradually going back to 20 years ago.”

The conflict in Afghanistan, coupled with drought and coronavirus, has left 18 million people – almost half the population – in need of humanitarian aid, the International Federation of Red Cross and Red Crescent Societies (IFRC) said.

It said tens of thousands of families had headed for relief camps in urban areas, but found they had neither food nor income.

“Basic services in Afghanistan are collapsing and food and other lifesaving aid is about to run out,” Jens Laerke, spokesperson for the U.N. Office for the Coordination of Humanitarian Affairs (OCHA), told a news conference in Geneva, urging more aid ahead of an international donor conference on Sept. 13.

Drought and war have forced about 5.5 million Afghans to flee their homes, including more than 550,000 newly displaced in 2021, the International Organization for Migration says.

Western powers say they are prepared to send humanitarian aid, but that broader economic engagement depends on the shape and actions of the Taliban government.