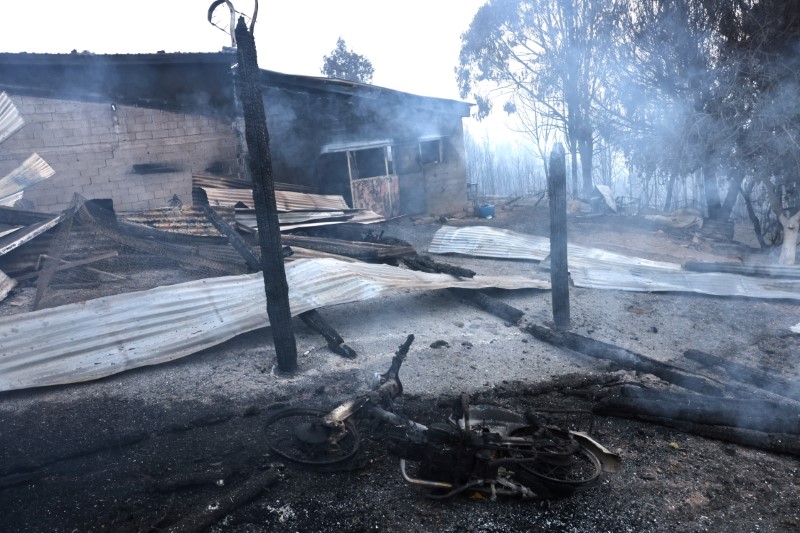 PEFKI, Greece (Reuters) -Greek Prime Minister Kyriakos Mitsotakis apologized on Monday for failures in tackling the devastating wildfires that have burned across Greece for the past week as the country counted the cost in lost homes and livelihoods.

As fires burned unabated in many parts of the country for a seventh day, the biggest front was on Evia, Greece’s second-biggest island located just off the mainland east of Athens.

“It burned everything, there’s nothing left,” said 77-year-old Makis Ladogiannakis, sitting in a cafe in the seaside town of Pefki, where a ferry waited to evacuate more locals and tourists to safety if needed, as in previous days.

“The fire was the biggest catastrophe for the village,” he said. “People lived off resin production and the olive trees.”

More than 500 fires have been burning across Greece, forcing the evacuation of dozens of villages and thousands of people and there has been growing public anger at delays and breakdowns in the government’s response.

Mitsotakis went on television late on Monday to make a public apology and promised that mistakes would be identified and rectified but called for unity.

“I fully understand the pain of our fellow citizens who saw their homes or property burned,” he said. “Any failures will be identified. And responsibility will be assigned wherever necessary.”

Mitsotakis promised that forests destroyed by the fires would be restored and climate defenses be built up, and he pledged compensation for those whose property was destroyed in the fires.

He approved a 500 million-euro package of aid for Evia and the Attica region around Athens. Ministers were due to meet on Tuesday to discuss further support measures.

Strong winds on Monday fueled flare-ups on Evia after appearing to ease earlier in the day. Water-bombing aircraft struggled to operate because of the large plumes of smoke blanketing the area, authorities said.

“The climate crisis is knocking on the door of the entire planet,” Mitsotakis said, just hours after a U.N. report said global warming was dangerously close to being out of control.

Temperatures had cooled somewhat in Greece, but were forecast to rise again during the week, meaning the risk of flare-ups remained high.

“It’s sad. All my childhood memories are burned right now,” said Richard Konstantine Allen, who lives in Athens but went back to try to save his property. “I used to run in this forest, to cycle to collect fruit, now everything is gone.”

In Athens, officials began to assess the damage from a blaze which tore through several suburbs north of the city last week before beginning to recede on Saturday.

“Our aim is to complete the inventory as soon as possible, in order to immediately begin the process of compensating our affected fellow citizens,” the ministry of infrastructure and transport said in a statement.

The blaze, which broke out on the foothills of Mount Parthina on the outskirts of the capital, sent thousands of people fleeing and damaged homes and businesses as well as thousands of hectares of forest land.

Almost 1,000 firefighters, nine aircraft and 200 vehicles have been sent to Greece from other European countries to help with the wildfires. In addition, Greece said on Monday it was expecting two aircraft from Turkey and an additional plane from Russia.

More than 2,000 residents and tourists have been evacuated by ferry since last Tuesday – the images of them departing against the backdrop of a dark red sky becoming emblematic of the blazes.