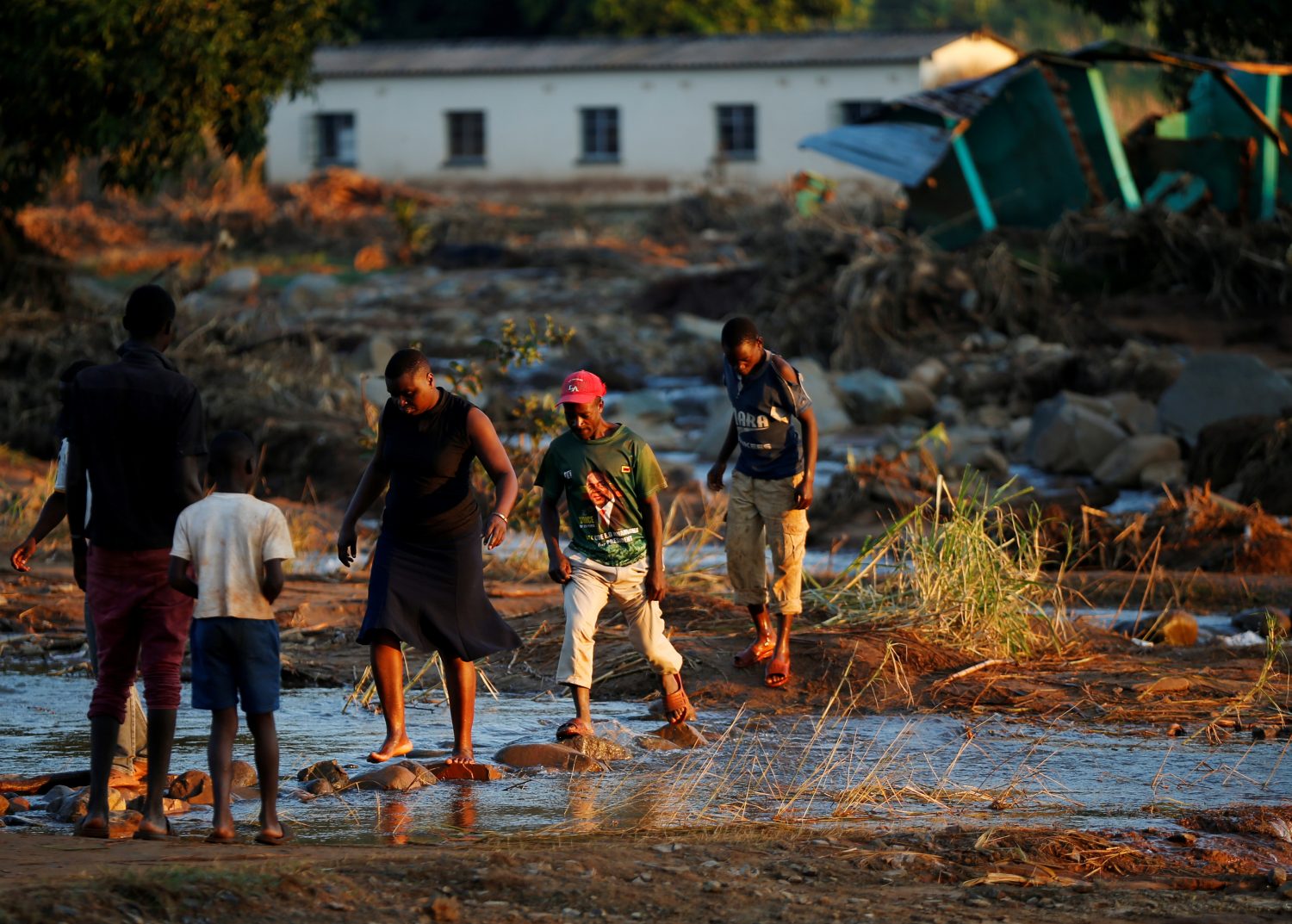 BEIRA, Mozambique (Reuters) – Hundreds of thousands of people are in need of food, water and shelter after Cyclone Idai battered Mozambique, Zimbabwe and Malawi.

As of Sunday, at least 847 people had been reported killed by the storm, the flooding it caused and heavy rains before it hit. Following is an outline of the disaster, according to government and United Nations officials.

Cyclone Idai landed on the night of March 14 near the port city of Beira, bringing heavy winds and rains. Two major rivers, the Buzi and the Pungue, burst their banks, submerging entire villages and leaving bodies floating in the water.

On March 16 the storm hit eastern Zimbabwe, where it flattened homes and flooded communities in the Chimanimani and Chipinge districts.

People killed: 185, according to government. The U.N. migration agency puts the death toll at 259.

Before it arrived, the storm brought heavy rains and flooding to the lower Shire River districts of Chikwawa and Nsanje in Malawi’s south. The rains continued after the storm hit, compounding the misery of tens of thousands of people.

LILONGWE (Reuters) – Police in Malawi said they arrested 140 suspected members of vigilante mobs that have targeted people accused of vampirism, clamping down after a wave of attacks in which at least nine have been lynched.

The mob attacks began in mid-September in four districts in southern Malawi, where belief in witchcraft is widespread.

This week they spread to Blantyre, the country’s second-biggest city, where mobs torched one person and stoned another to death on Wednesday.

“We have so far arrested 140 people we suspect are behind the mob killings in Blantyre and other districts and the investigations are still going on,” Lexon Kachama, inspector general of Malawi Police, told reporters.

Police were doing everything possible to contain the situation and ensure the violence did not spread to other cities and townships, he said.

Information minister Nicholaus Dausi told Reuters that the government will put soldiers on the streets to stem the vampire rumours that have resulted in nine deaths.

“We are deploying the army in townships and districts affected to help police calm down the situation and save lives,” Dausi said.

President Peter Mutharika has also been visiting parts of the country affected by the violence.

The United Nations and U.S. embassy have blacklisted several districts in Malawi as dangerous zones for staffers and nationals. Earlier this month the UN pulled staff out of two areas in southern Malawi. 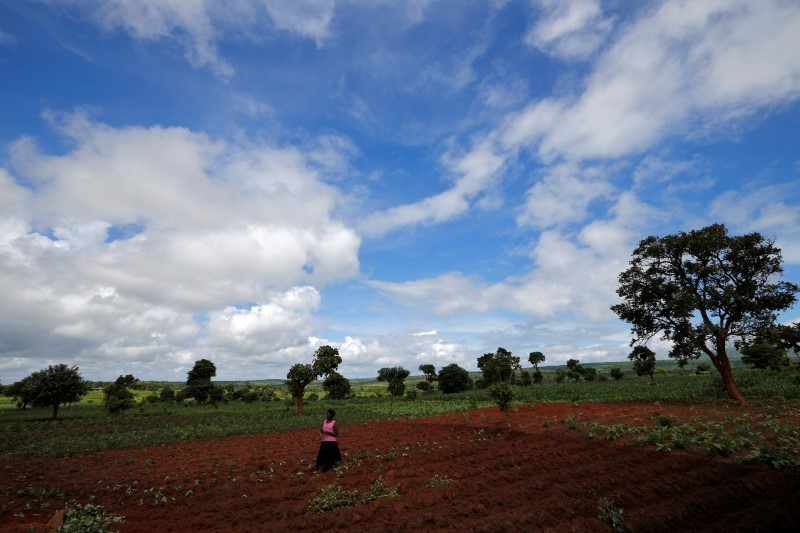 LILONGWE (Reuters) – As she walks along a dirt road in central Malawi, Louise Abale carries her precious maize wrapped in a brightly coloured cloth and balanced on her head.

Because of drought in Malawi and across southern Africa the grain has doubled in price in the space of a year, and now costs around 200 kwacha ($0.28) a kilo.

Like many, Abale is struggling to pay for maize, a staple of the diet, and says her own – stunted – crop will not be ready for harvest for two months. “It’s too expensive, I have almost no money,” she said.

In all 2.8 million people in Malawi, or 17 percent of the population, now face hunger, according to the United Nations World Food Programme (WFP).

Drought and floods have hit the maize crop, exposing the fragility of gains which had seen Malawi’s rates of malnutrition slashed in the past two decades.

That progress was partly rooted in a fertilizer grant for small-scale farmers. But now the government, starved of donor funds following a graft scandal over two years ago, can ill afford such payments and says it must scale down the program.

Ironically, policies aimed at ensuring basic food security are partly to blame for a cycle of rural poverty and aid dependency in this land-locked African nation, leaving the population vulnerable to climate shocks, economists say.

“There is no doubt that the fertilizer subsidy was only feasible due to donor support,” said Ed Hobey, an analyst at Africa Risk Consulting. “At best, it was unsustainable without continued donor support, at worst, it was an illusion built on aid.”

Launched in 2005, the Farm Input Subsidy Programme (FISP) provides qualifying farmers – those with limited income but a plot of productive land – with two coupons which can be redeemed for two 50-kg bags of fertilizer. The recipients make a modest contribution, with the government footing most of the bill.

Because the government is subsidizing the production of maize – the main source of calories for many poor households – it also bans the export of the grain.

The program is credited by the government and some aid agencies with lifting maize production and cutting hunger.

The data appear to back that up.

But FISP’s role here is difficult to untangle as most of those gains were made before 2005. Still, there is evidence of benefits, including indirect ones.

But the program has also had unintended consequences.

The focus on food security, including the ban on maize exports, has discouraged investment in more productive commercial farming methods.

“Our concern with the export ban is that it limits the scope to expand production among more medium and large-scale farms if they are unable to market the surplus,” said Richard Record, World Bank Senior Country Economist, World Bank in Malawi.

In the long run such a ban stunts food production, especially in an age of increasingly high-tech farming, economists say.

In all, FISP has accounted for as much as 9 percent of government expenditure and over half the agricultural budget, leaving scant funds to invest in rural transport links and other projects that would benefit the countryside.

“The FISP was not matched by increased investment in rural infrastructure especially roads and irrigation,” said Hobey of Africa Risk Consulting.

This retards development of other sectors in the farm value chain, such as canning, which can kick-start industrialization, economists and analysts say.

Initially FISP met its objective: providing calories to the rural poor. Between 2007 and 2014 Malawi produced bumper maize crops, with surpluses recorded since 2007 – until last year.

A study in the “The American Journal of Agricultural Economics” found a 15 percent boost in maize production under FISP coincided with a 15 percent decrease in the amount of land devoted to the grain.

This suggests small-scale farmers diversified to cash crops such as tobacco and cotton.

Donor funds for the budget have dried up in the wake of a scandal over two years ago dubbed “cashgate”, in which state officials siphoned millions of dollars.

“We are going to have to be scaling down expenditure on FISP, we are reacting to diminishing resources of funds for the budget,” Finance Minister Goodall Gondwe told Reuters.

Belt tightening is underway, though the number of FISP recipients has remained unchanged at 1.5 million.

Several subsistence farmers interviewed by Reuters in their fields said they could not afford the 3,500 kwacha, let alone the full cost.

The price for fertilizer has surged as it is imported and the kwacha has been sliding against the dollar, losing 63 percent in the past 12 months.

Gondwe said the program this financial year would cost 54 billion kwacha instead of an original estimate of 40 billion, plus an additional 8 billion rand for seeds.

To be sure, FISP has helped individual farmers, such as Salome Banda. Five years ago, Banda made the transition from subsistence farming to producing a surplus of maize for market because she received the grant once.

“I have not had it since 2010 but I can buy my own fertilizer now,” she told Reuters as she stood proudly by 50 kg bags of her maize stacked in a warehouse north of Lilongwe. She said one FISP grant tripled her production that season.

For others, the benefits have not translated into such gains and even Banda, while she produces surpluses, has hardly made the leap to more productive, technical farming.

“When I got FISP, I fed all my children,” said Matezenji Watsoni, a 35-year-old mother of seven, as she waited outside a World Food Programme relief station in a rural Lilongwe suburb for a 50 kg bag of maize.

“But this is the third year I have not had it, and it has brought hunger to my house,” she said.

This year a perfect storm is brewing after a decade of maize surpluses turned into a deficit of 225,000 tonnes in 2015, in a country that consumes 3 million tonnes annually. The harvest this season looks set to be even worse.

RURAL TILL THE COWS COME HOME

Another unintended outcome of the FISP is that by subsidizing peasant farming, people have an incentive to remain on the land, adding to rural population pressures.

Late rains have clothed central regions in simmering shades of green but this idyllic image belies the late start to the summer planting season and the grinding poverty of rain-fed, hand tilled agriculture.

Malawi, which has done little to industrialize, is also barely urban. In 1990, 88 percent of the population was rural, a number that was 84 percent in 2014, according to World Bank data. Sub-Saharan Africa as a whole is 63 percent rural.

“It will take time to industrialize. But don’t forget this country cannot even make a needle. So to base your policy on that probably is asking too much.”

The International Monetary Fund is lending $157 million to Malawi in an attempt to save the country’s flagging economy.

The country’s economic crisis is attributed to recently deceased leader Bingu wa Mutharika who had long been criticized for his human rights record and handling of the nation’s economy. END_OF_DOCUMENT_TOKEN_TO_BE_REPLACED