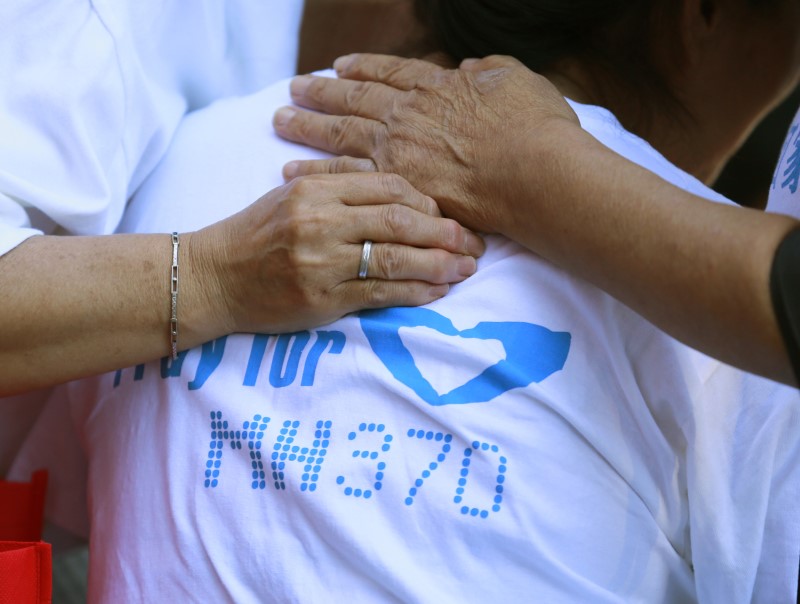 SYDNEY, Nov 2 (Reuters) – A new report into missing Malaysia Airlines MH370 says that additional analysis of satellite communications from the aircraft was consistent with it being in a “high and increasing rate of descent” when it vanished.

The report by the Australian Transport Safety Bureau (ATSB), which is leading the search for MH370, said additional analysis of wing flap debris found the aircraft was not configured for a landing.

Both pieces of information support the agency’s long-held view that an unpiloted MH370 descended rapidly after running out of fuel with no human intervention.

The 28-page report released on Wednesday, containing new end-of-flight and drift simulations, coincides with the start of a three-day meeting of international experts to develop potential plans to continue the search for MH370.

The Boeing 777 disappeared on its way from Kuala Lumpur to Beijing in March 2014 with 239 passengers and crew on board, sparking a two-and-a-half year search that has focused on the Indian Ocean.

Authorities from Malaysia, Australia and China initially expected to finish searching a 120,000 sq km (46,000 sq mile) target area by the end of 2016, but bad weather has delayed the probe by another two months.

Australian Transport Minister Darren Chester, who is chairing the Canberra meeting of experts, said the group would review all available data and analysis associated with the search.

“The experts will also inform the remainder of the search effort and develop guidance for any future search operations,” Chester said in a statement.

The ATSB report suggests that experts believe the current search area is the most likely to contain the crash site.

In a separate development, a lawyer for the families of four Australian victims told Reuters that Malaysia Airlines has
agreed to release information about the missing plane as part of a compensation case.

John Dawson, a partner at Carneys Lawyers, said he had been advised he would receive the information by the end of the month. The information is to include medical certificates held by the flight crew. 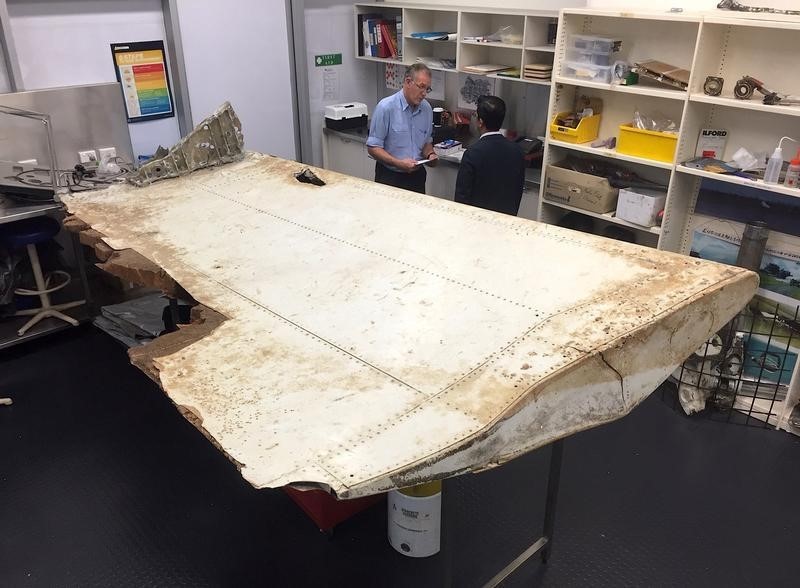 KUALA LUMPUR (Reuters) – Malaysia said on Thursday that a large piece of aircraft debris discovered on the island of Pemba, off the coast of Tanzania, in June, was from the missing Malaysia Airlines jet MH370.

A search of more than two years has turned up few traces of the Boeing 777 aircraft that disappeared in March 2014, with 239 passengers and crew on board, soon after taking off from Kuala Lumpur, the Malaysian capital, bound for Beijing. 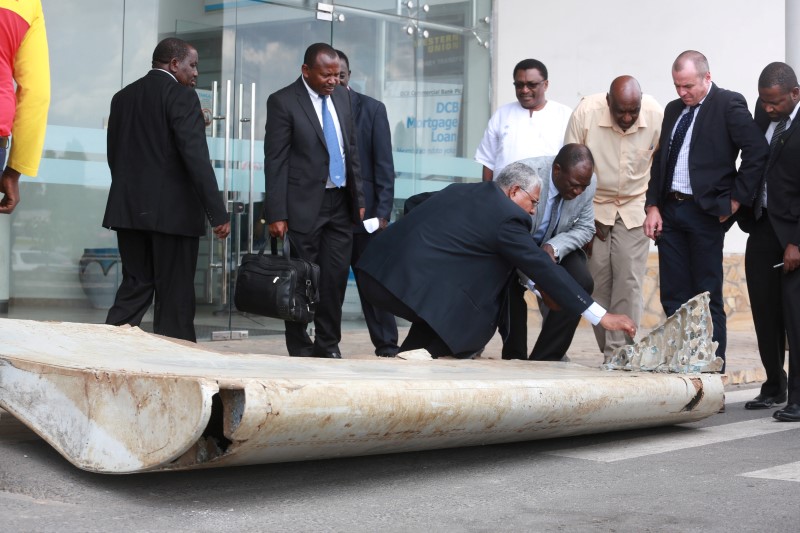 Ministry of Transport Malaysian Senior Accident investigator Aslam Basha Kham (C) talks to other officials inspecting a wing suspected to be a part of missing Malaysia Airlines jet MH370 discovered on the island of Pemba, off the coast of Tanzania, in Dar es Salaam, Tanzania July 15, 2016. REUTERS/Stringer

The debris, an outboard flap, will be examined further to see if it can yield any insight into the circumstances around the missing plane, Malaysian Transport Minister Liow Tiong Lai said in a statement.

Investigators have previously confirmed a piece of plane debris found on the French island of Reunion in July 2015 as being part of MH370. They are examining several other pieces of debris found in Mozambique, South Africa and Rodrigues Island, a territory of Mauritius. 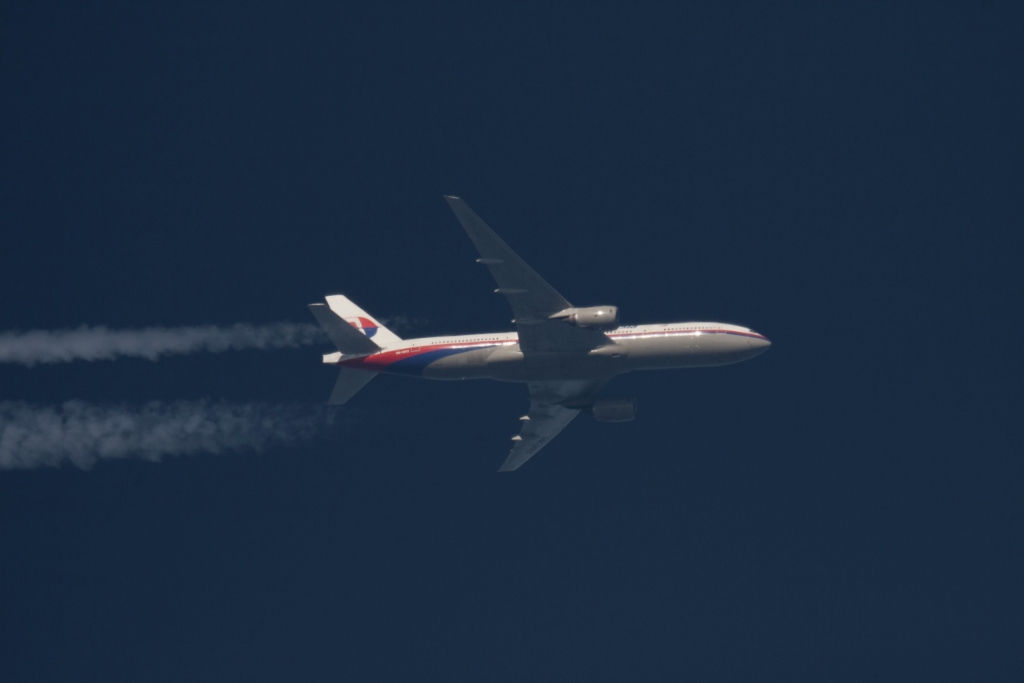 KUALA LUMPUR (Reuters) – Debris believed to be part of a Boeing <BA.N> 777 jet has been found off Mozambique and will be taken to Australia to be examined by investigators involved in the search for the missing Flight MH370, Malaysia’s transport minister said.

Liow Tiong Lai said there is a “high possibility” that the piece of debris belonged to a 777 jet but added he could not conclude yet that it was from the missing Malaysia Airlines jetliner.

“The debris will be taken to Australia for further examination,” he told Reuters.

An official in Mozambique’s foreign ministry told Reuters the fragment was being flown to the capital Maputo from Inhambane province, 800 km (500 miles) to the north, and would arrive on Wednesday evening. It would be examined in Maputo by Malaysian and U.S. experts, the official said.

Earlier on Wednesday NBC News said the piece could be a horizontal stabilizer from a Boeing 777, citing U.S., Malaysian and Australian investigators who looked at photos of the debris.

The piece of debris was discovered off the east African coast between Mozambique and Madagascar.

Flight MH370 disappeared two years ago when it was en route to Beijing from Kuala Lumpur. Last year authorities found a piece of the plane’s wing on the shore of Reunion island in the Indian Ocean on the other side of Madagascar.

“It is yet to be confirmed and verified….I urge everyone to avoid undue speculation as we are not able to conclude that the debris belongs to MH370 at this time,” Liow said on his Twitter account.

Malaysian Prime Minister Najib Razak announced Wednesday a piece of a wing found on a remote French island was part of the missing Malaysian Airlines flight 370.

“It is with a very heavy heart that I must tell you, an international team of experts have conclusively confirmed that the aircraft debris found on Reunion is indeed from MH370,” Prime Minister Najib Razak said at a brief press conference. “We now have physical evidence that … Flight MH370 tragically ended in the Southern Indian Ocean.”

The flaperon from a Boeing 777 was found on a beach at the town of Saint Andre on Reunion Island.  The island is a French territory.

The wing part had been taken to the DGA TA aeronautical testing site in Toulouse, France for analysis by aviation experts from around the world.  The wing arrived at the facility on Saturday and officials there say the investigators will conduct a microscopic investigation to see if they can determine why the plane went down.

The discovery confirms that the missing plane went down in the Indian Ocean 17 months ago with 239 passengers and crew aboard.

Australian officials who have been conducting an underwater search for plane debris say they will not alter their search parameters despite the confirmation of the wing part belonging to the missing craft.  They stated that heavier portions of the plane such as the engines would have sunk to the ocean floor and not drifted as the lighter wing part had done.

“The burden and uncertainty faced by the families during this time has been unspeakable,” Prime Minister Najib said. “It is my hope that this confirmation, however tragic and painful, will at least bring certainty to the families and loved ones of the 239 people onboard MH370.”

“I promise you this,” he continued, “Malaysia will always remember and honor those who were lost onboard MH370.”

Pro-Russian terrorists attempting to overthrow the Ukrainian government have shot down a Malaysian Airlines flight that was flying over the Donetsk region of the country.

The flight, MH17, was headed to Kuala Lumpur from Amsterdam according to airline officials.  The plane was flying at 33,000 feet when it was shot down using a Russian made ground-to-air missile system.

The Australian government reported many on the plane were researchers and scientists on their way to a United Nations conference on AIDS in Melbourne.  At least three infants are among the dead and the passenger manifest shows a number of Americans on the flight.

Witnesses say they saw a missile approaching the plane and that the plane split in two after the impact.  The debris field from the flight covered over nine miles with large pieces untouched by fire; leading aviation experts to say the plane broke up mid-flight.

The terrorists in the region are trying to blame the incident on the Ukrainian government, however a posting online earlier in the day from Igor Strelkov, commander of the pro-Russian terrorists, read “we warned you not to fly over our sky.”

The posting was removed after it was reported in major media a passenger plane was shot down rather than a Ukrainian military or transport flight.