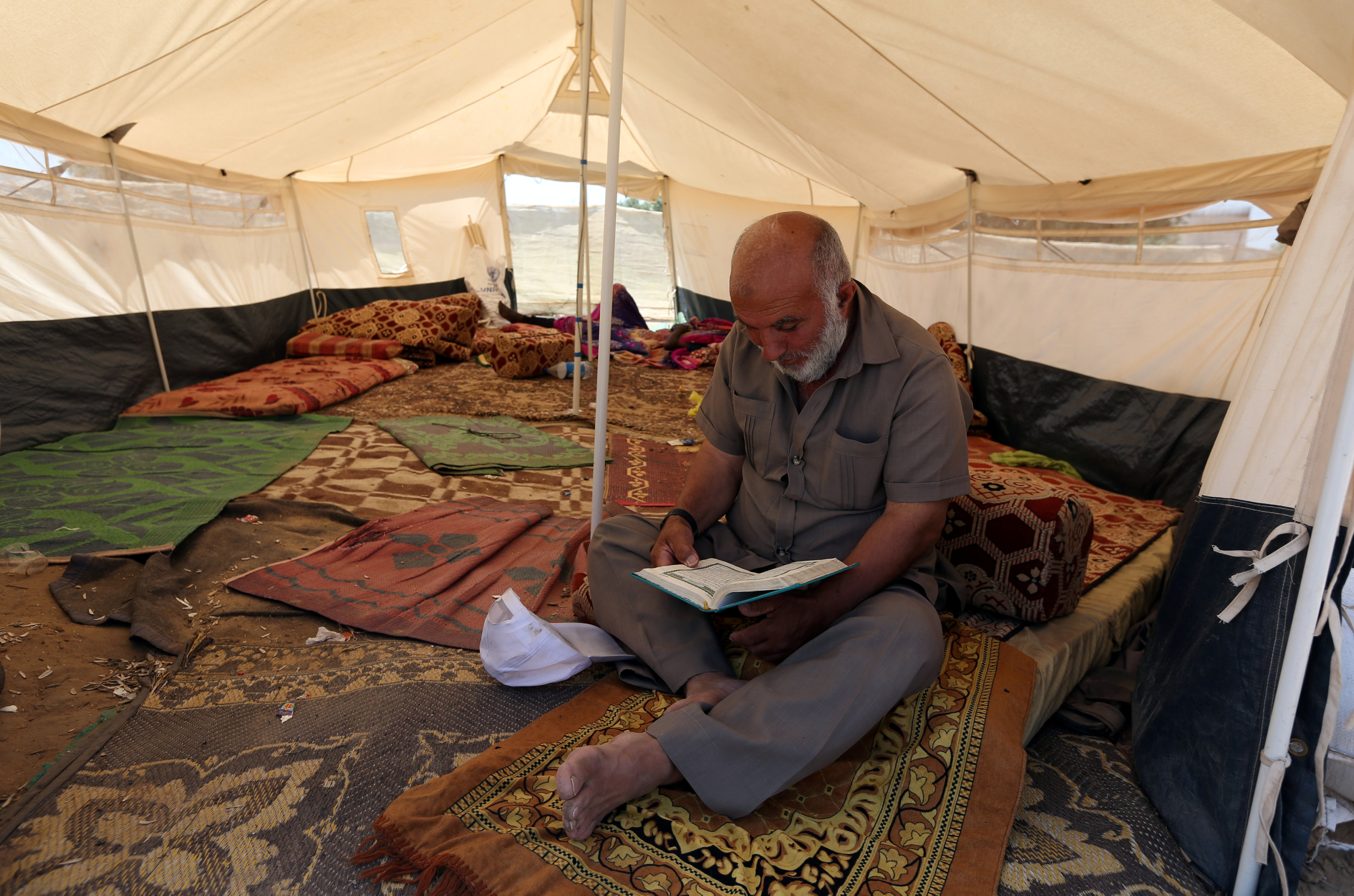 GAZA (Reuters) – Young men filled sandbags to prepare for future protests at encampments along Gaza’s Israeli border on Thursday, though tents were mostly empty as Palestinians joined Muslims around the world observing the daylight fast at the start of Ramadan.

After the bloodiest day for Palestinians in years on Monday, when 60 were killed by Israeli gunfire during mass demonstrations that Israel said included attempts to breach its frontier fence, calm and a heatwave descended on the area.

Organisers of the protests that began on March 30 set Friday as a day to honour the dead and urged Gazans to flock again to the tent cities. But Ramadan traditions – prayer, family visits and feasts – seemed to keep crowds away during the hot hours.

At one encampment, about 70 young men filled sandbags in anticipation of people returning to the protest sites.

“We are making a sand barrier so people can feel a bit safer,” one of the men said, declining to give his name.

Ramadan is usually a time of celebration, but after dozens of funerals during the week the mood was bleak in Gaza.

Israel’s intelligence minister, Israel Katz, said on Wednesday neighboring Egypt had put pressure on Hamas, the armed Islamist faction that controls the Gaza Strip, to scale back the protests.

Hamas denied it had come under Egyptian pressure to curb the protests, which provoked international condemnation of Israel’s deadly tactics in putting down the unrest. The organizing committee for the demonstrations said Muslims’ abstinence from food and drink during the hot mornings and afternoons of Ramadan would be taken into account in further protests.

The “March of Return” demonstrations advocate the return of Palestinians to lands lost to Israel during its founding in 1948, and are also intended to draw attention to harsh conditions in Gaza, where the economy has collapsed under an Israeli-Egyptian blockade since Hamas took power in 2007.

Israel, with U.S. backing, says Hamas is behind the protests, deliberately provoking violence for propaganda aims. Hamas says the demonstrations are a popular outpouring of anger, and Israel carried out a “massacre” in response.

Dawoud Shehab, a member of the organizing committee, said activities at the encampments would get under way only in the late afternoon when temperatures drop. Late-night prayers will also be held there, he said.

“The marches are continuing and there are calls on people to gather in mass on Friday in a day we have dedicated to glorifying the martyrs,” Shehab told Reuters.

The message was echoed in appeals blared by loudspeakers on vehicles that drove into Gaza neighborhoods to urge people to turn out. Organisers said the protest would stretch into June.

Violence along the border has been comparatively limited over the past two days, with no casualties reported by either side since Tuesday, when two Palestinians were killed while dozens of others were buried.

Israel and Hamas have fought three wars in the past decade since Gaza fell under control of the militant group that denies Israel’s right to exist. Israel and Egypt say their de facto blockade of the strip is necessary for security reasons.

The World Bank says it has driven Gaza to economic collapse, with one of the highest unemployment rates in the world. Eighty percent of Gaza’s 2 million people are now dependent on aid.

(Writing by Jeffrey Heller in Jerusalem; Editing by Peter Graff)