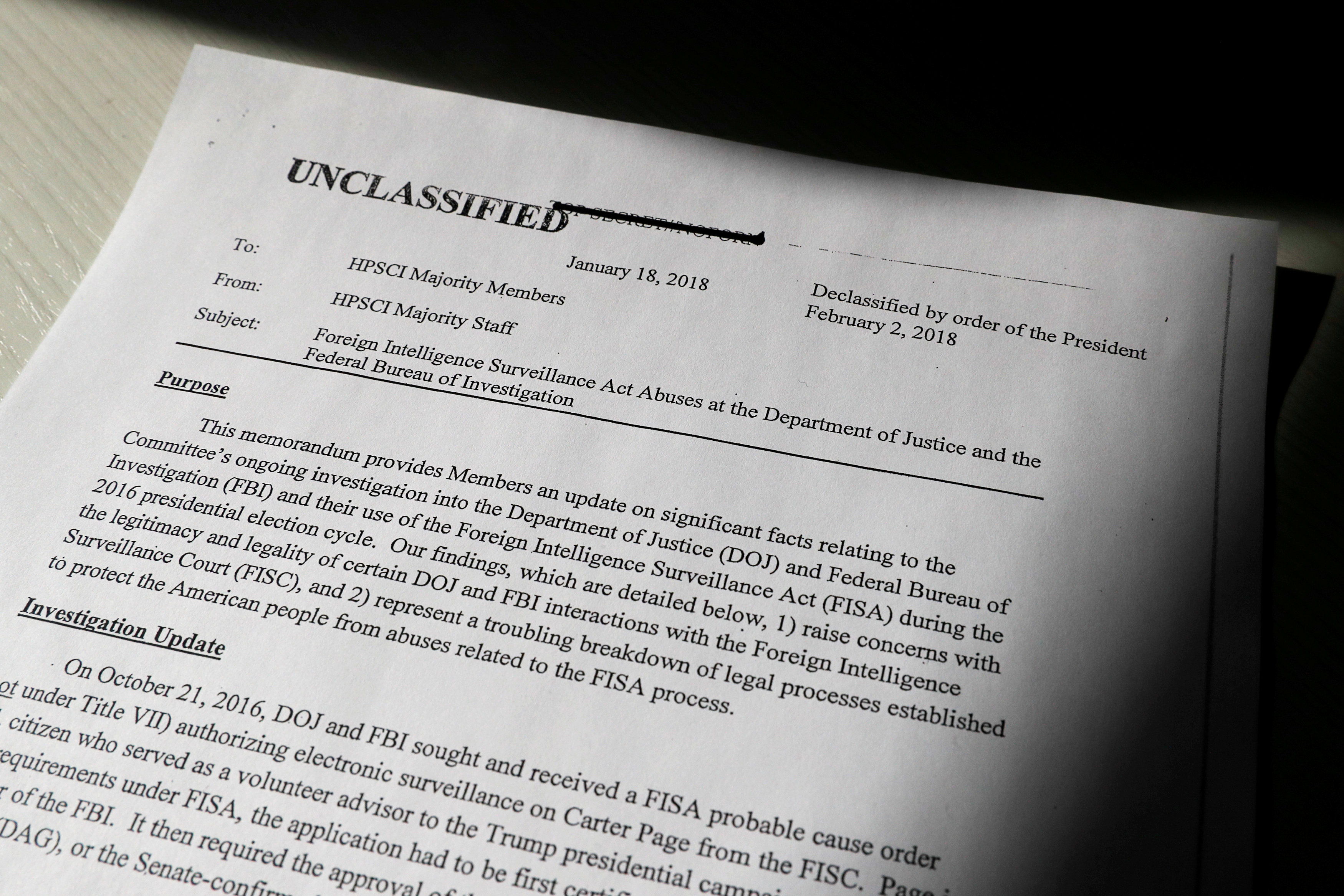 WASHINGTON (Reuters) – The White House must decide this week whether to clear the release of a classified memo written by Democrats. The document aims to rebut a Republican memo alleging FBI and Justice Department bias against President Donald Trump in a federal probe into potential collusion between his 2016 presidential campaign and Russia.

The following explains what is in play in a partisan dispute roiling Washington.

WHAT IS THE REPUBLICAN MEMO?

The four-page document was commissioned by Representative Devin Nunes, the Republican chairman of the House of Representatives Intelligence Committee, and released on Feb. 2.

It accused senior Federal Bureau of Investigation and Justice Department officials of not revealing that portions of a dossier of alleged Trump-Russia contacts used in seeking a secret Foreign Intelligence Surveillance Court warrant to eavesdrop on former Trump campaign aide Carter Page were partly paid for by Democrats.

It also portrayed former British spy Christopher Steele, who compiled the dossier, as biased, saying he “was desperate that Donald Trump not get elected and was passionate about him not being president.”

WHAT IS THE DEMOCRATIC MEMO?

In late January, House Intelligence Committee Democrats said they had drafted their own classified 10-page memo about the investigation of Russia and the 2016 U.S. election. They said their document would counteract what they criticized as “highly misleading” assertions in the Republican memo.

While Republicans on the intelligence panel initially blocked Democrats’ effort to release their memo, they joined Democrats on Feb. 5 and allowed the Democratic document to be sent to the White House for Trump to decide whether to release it.

WHY DOES IT MATTER?

Democrats say the Republican memo could be used by Republicans to try to undermine the credibility of Special Counsel Robert Mueller’s federal investigation into possible collusion between Trump’s presidential campaign and Russia to help him win the election.

Mueller’s investigation also is examining whether Trump has committed obstruction of justice by trying to thwart the Russia probe, which has cast a cloud over his year-old presidency.

Democrats say Trump’s allies hope to use the memo to protect Trump. They believe it could give the president, who fired FBI Director James Comey in May, an excuse to fire Deputy U.S. Attorney General Rod Rosenstein, who hired Mueller, or even to dismiss Mueller himself.

U.S. intelligence agencies have concluded that Russia interfered in the 2016 presidential campaign using hacking and propaganda, an effort that eventually included attempting to tilt the race in Trump’s favor.

Moscow has denied meddling and Trump has denied collusion or any obstruction of justice. He has called the investigation a witch hunt.

WHAT ARE THE POSSIBLE CONSEQUENCES OF THE MEMOS?

The release of the Republican memo widened the divide between Democrats and Republicans, possibly diminishing the credibility of any findings by congressional panels that are also investigating the Russia matter.

Its release also threatened to weaken long-standing cooperation between lawmakers and intelligence agencies, which have shared classified information with Congress with the understanding that it would never be made public.

If Trump declines to declassify and release the Democrats’ memo, it could set up a dispute that would pit the White House and many of Trump’s fellow Republicans in Congress against Democrats, law enforcement and intelligence agencies.

WHAT ROLE DOES THE INTELLIGENCE COMMITTEE PLAY?

The House Intelligence Committee is one of three congressional panels investigating the Russia issue even as Mueller pursues his criminal probe. The dispute over the memo has deepened a partisan divide on the panel, whose Democratic members accuse Republicans of seeking to focus on the Steele dossier and Page surveillance to protect Trump. Republicans say they merely want to publicize wrongdoing. 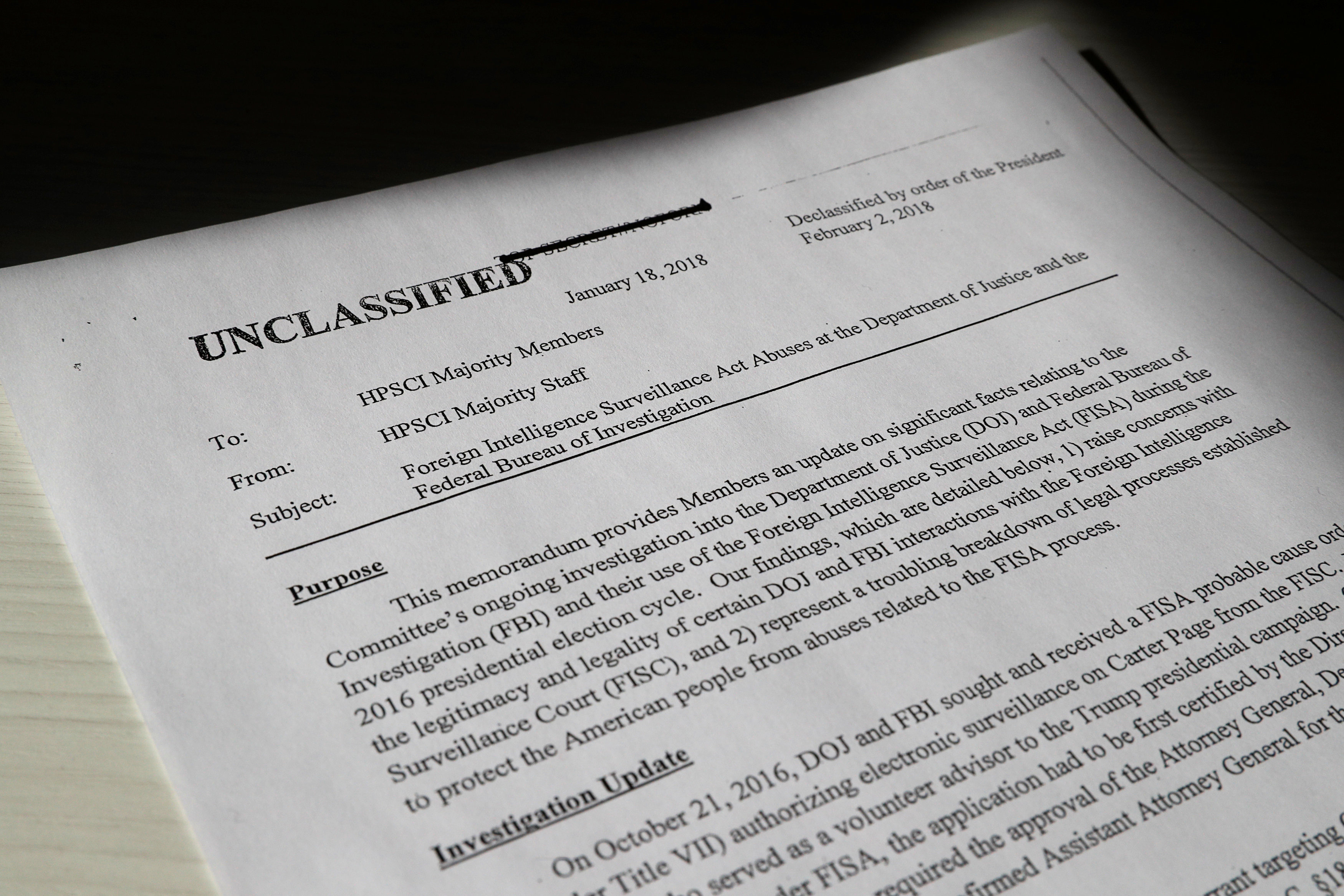 By Doina Chiacu and Steve Holland

WASHINGTON (Reuters) – U.S. President Donald Trump on Friday approved the release of a classified Republican memo that alleges bias against him at the FBI and Justice Department, in an extraordinary showdown with law enforcement agencies over the probe into alleged Russian interference in the 2016 election.

Ignoring the urgings of the FBI earlier this week, Trump declassified the four-page memo and sent it to Congress, where Republicans on the House of Representatives Intelligence Committee immediately released it to the public.

The Republican president told reporters that the contents of the document tell a disgraceful story of bias against him and that “a lot of people should be ashamed.”

The document has become a flashpoint in a battle between Republicans and Democrats over Special Counsel Robert Mueller’s criminal probe into possible collusion between Trump’s campaign and Russia to sway the 2016 presidential election. Mueller is also believed to be investigating any attempts to impede his probe.

Trump has repeatedly complained about Mueller’s investigation, which has cast a shadow over his first year in office, calling it a witch hunt and denying any collusion or obstruction of justice. Moscow has denied any election meddling.

The memo, criticized by the FBI as incomplete and slammed by Democrats as an attempt to undermine Mueller’s probe, purports to show that the investigation of ties between the Trump campaign and Russia was driven by political bias.

The document, commissioned by the Republican chairman of the House intelligence panel, Devin Nunes, uses the case of investigations into a Trump campaign aide, Carter Page, saying the FBI used a biased source to justify surveillance on him.

It alleges that a dossier of Trump-Russia contacts compiled by former British spy Christopher Steele, and funded in part by U.S. Democrats, formed an “essential part” of requests for electronic surveillance on Page that began in October, 2016.

It says the initial application and subsequent renewal applications did not mention the link between Steele and the Democrats. It also portrays Steele as biased, saying he “was passionate about him (Trump) not being president.”

“The selective release and politicization of classified information sets a terrible precedent and will do long-term damage to the Intelligence Community and our law enforcement agencies,” Democrats on the House intelligence panel said in a statement on Friday.

The Democrats said they hoped to release their own memo responding to the allegations on Feb. 5.

The entire file that the Justice Department used to apply to a special court for permission to eavesdrop on Page remains highly classified, making it hard to evaluate the memo’s contents.

Two days ago, in a rare public rebuke of the president and Republicans in Congress who were pushing to release the memo, the Federal Bureau of Investigation said it had “grave concerns about material omissions of fact” in the document and it should not be made public.

On Friday, FBI agents defended their work and said they “have not, and will not, allow partisan politics to distract” from their mission.

“The American people should know that they continue to be well-served by the world’s preeminent law enforcement agency,”

Earlier on Friday, Trump accused top U.S. law enforcement officers – some of whom he appointed himself – of politicizing investigations.

“The top Leadership and Investigators of the FBI and the Justice Department have politicized the sacred investigative process in favor of Democrats and against Republicans – something which would have been unthinkable just a short time ago,” Trump wrote on Twitter. The president praised “rank and file” FBI employees.

His latest salvo was sure to worsen the president’s frayed relations with agencies that are supposed to be politically independent.

James Clapper, the former director of national intelligence under Democratic President Barack Obama, said Trump’s attack on the FBI and Justice Department was the “pot calling the kettle black.”

Seeking to defuse the conflict over the memo, Republican House Speaker Paul Ryan backed the release of a Democratic counterpoint document. His office said he backed making the Democrats’ rebuttal public if it does not reveal intelligence gathering sources or methods.

Democrats say their counter-memo restores context and information left out of the Republican version. Republicans have resisted releasing that document,

The former head of Trump’s presidential campaign, Paul Manafort, and the Trump administration’s former national security adviser, Michael Flynn, have been charged in the Russia probe, along with others.

You can click here for the entire memo that has just been released.    Intelligence committee memo