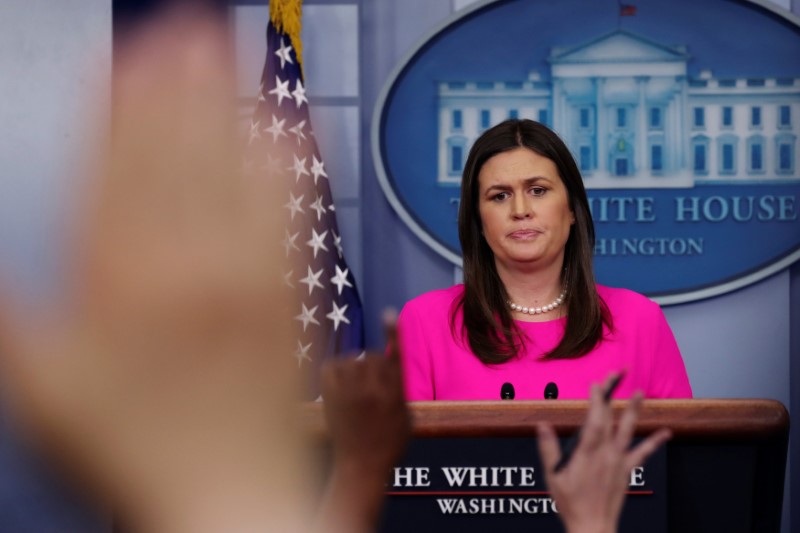 WASHINGTON (Reuters) – White House press secretary Sarah Sanders will get Secret Service protection after she was asked to leave a restaurant in southern Virginia in protest of President Donald Trump’s policies, a source familiar with the matter told Reuters.

The source did not provide details. The Secret Service and the White House both declined to confirm the matter.

NBC News, which first reported that Sanders would get protection, said security would be provided at her home on a temporary basis, citing a law enforcement official.

Sanders was asked to leave the Red Hen in Lexington, Virginia, on Friday because she worked for Trump. The owner later confirmed the reasoning to media, and the incident drew praise and condemnation online for the restaurant.

The incident prompted Twitter attacks from the president on Monday.

Trump lashed out at Democratic U.S. Representative Maxine Waters, who told a crowd in California on Sunday that the Red Hen’s actions should be a model for resisting the president’s administration.

Tensions have risen over the Republican president’s “zero tolerance” immigration policy that initially led to migrant children being separated from their parents at the U.S.-Mexico border.

Mike Huckabee, the former Arkansas governor, said the protection was related to other threats Sanders has received.

“Well, it’s not so much related to the Red Hen as it is to other threats and you got to remember, she has three small children and there have been some nasty things,” Mike Huckabee said in an interview with Fox Business Network.

On Tuesday Morning, U.S. District Judge David Bunning, the same judge who initially jailed  Kim Davis, the court clerk from Kentucky last Thursday on a contempt of court charge has ordered her release. Davis has been held for five days for refusing to issue marriage licenses to all couples after the recent Supreme Court Decision that re-defined marriage for all states.

Judge Bunning lifted that order Tuesday, allowing her to be released stating that the court is “satisfied.” Since last week, the clerk’s office has been issuing marriage licenses “to all legally eligible couples” — those licenses have been issued by Davis’ deputy clerks. At the same time, Bunning directed Davis not to “interfere in any way” with the marriage licenses now being issued by her office.

Former Arkansas Governor Mike Huckabee spoke to a group of Hispanic evangelicals in Texas and said that Christians are seeing their beliefs criminalized.

“We are living in perilous times where people who are Christian are on the brink of being criminalized for their convictions,” stated Huckabee.

He also emphasized his belief that the nation of Israel needs to have our full support and that there is no other way to believe than pro-life because “there is no such thing as a disposable person.”

Huckabee was speaking to the National Hispanic Christian Leadership Conference in Houston.  He was one of several speakers to talk about their faith to the group of over 1,000 attendees that included former Florida governor Jeb Bush.

“There is no more powerful or liberating influence on this earth than the Christian conscience in action and today in America it is important to respect and to protect Christians acting on their faith,” said Bush.

“Not just talking about their faith, but there is a constitutional right and more importantly for a loving society Christians need to have the space to be able to act on their conscience.” 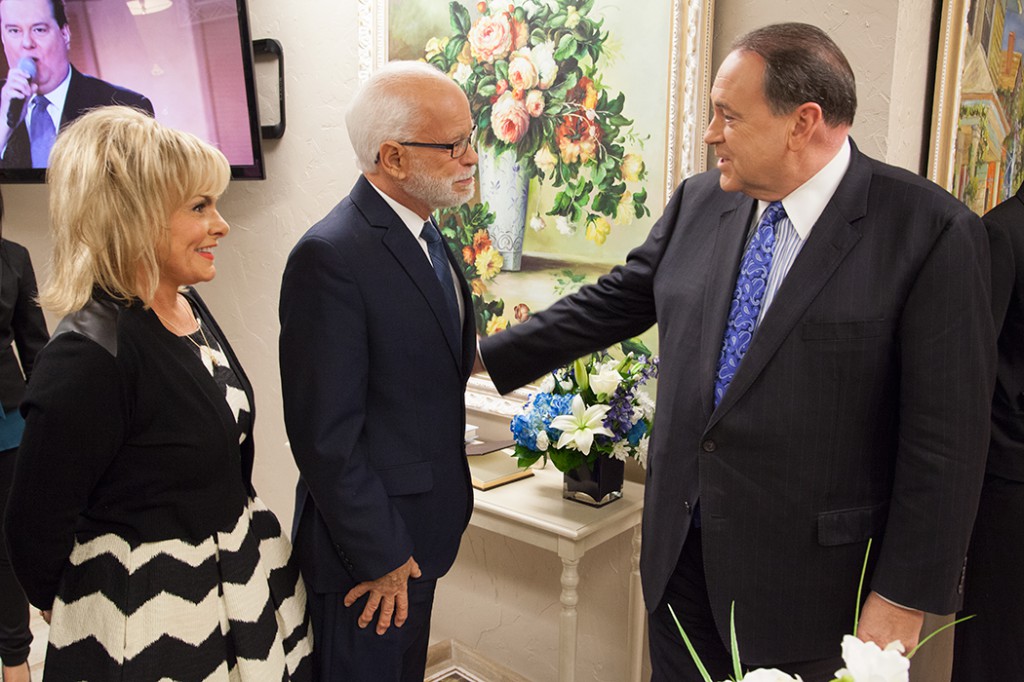 This week, I hope you have been enjoying our visit with Governor Mike Huckabee.  It truly was an honor to meet this kind, approachable man of God.  It felt as though Jim and I had known him for years!

Both of us had been reading his new book God, Guns, Grits and Gravy. You know it is really a good book when you can catch us reading anything at the very same time!  There were several moments that we were nodding our heads simultaneously with this feeling of relief that someone understands what America has been crying out desperately to our government for a very long time…common sense!

END_OF_DOCUMENT_TOKEN_TO_BE_REPLACED 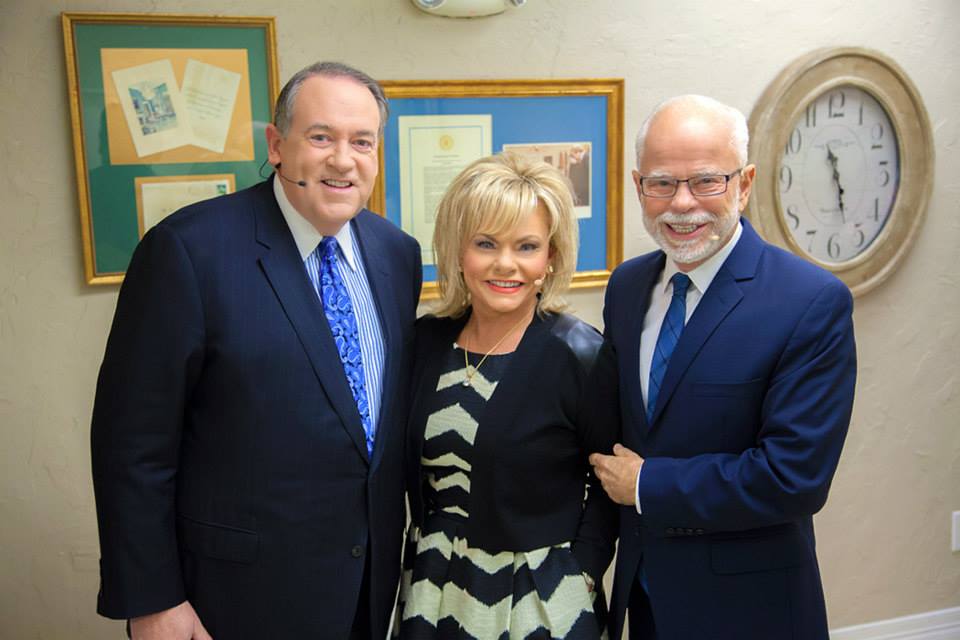 I was truly thrilled to recently have the honor of interviewing Governor Mike Huckabee, a born-again Christian and ordained Southern Baptist minister, on our show. It was one of the top 10 highlights of my life right alongside interviews I have done with Presidents Ronald Reagan, Jimmy Carter, and Bill Clinton. I believe Mike Huckabee is a man raised up for this hour, and he has a message for us – a message I was honored to help him get out to the world on our television broadcast. Governor Huckabee has written extensively about his desire to see this nation return to the core principles that most of us share in his new book, “God, Guns, Grits, and Gravy,” which is available on our website. END_OF_DOCUMENT_TOKEN_TO_BE_REPLACED

Pastors across America are expressing their solidarity with pastors in the Houston area who are being harassed by the city government with “I Stand Sunday.”

The event will feature former Arkansas Governor Mike Huckabee, leaders of the Southern Baptist Convention and members of the Duck Dynasty family.  The event is aimed to raise awareness of government attempts to intimidate Christians into silence.

The pastors being harassed by the city had spoken out about the city’s new law that would allow situations such as men using women’s bathrooms.

“I Stand Sunday” will be held November 2nd at Grace Church in Houston and broadcast nationwide.

“Hosted by Family Research Council and other partners, speakers from across the nation will gather at Grace Community Church in Houston to focus on the freedom to live out our faith free of government intrusion or monitoring,” reads the I Stand Sunday website.  “We will stand with pastors and churches in Houston who have been unduly intimidated by the city’s mayor in demanding they hand over private church communication.”

A group of speakers at an event celebrating the 200th anniversary of the Star Spangled Banner says that American Christianity is under serious threat.

The event, held at First Baptist Church in Charlotte, North Carolina, featured speakers like former Gov. Mike Huckabee, Texas Senator Ted Cruz and his father, Family Research Center head Tony Perkins and other leaders.  The event was to celebrate the importance of Christianity in the national anthem and the importance of Christianity in American history.

Senator Cruz said that religious liberty is endangered not just abroad but at home.

“If you’re litigating against nuns,” Cruz said, referring to the struggle of Little Sisters of the Poor against the Obama administration’s contraception mandate, “you’ve probably done something wrong.”

“Our land needs healing,” Cruz continued. “When this country was founded, it was founded on the radical concept that our rights don’t come from kings, queens or governments, but our rights come from Almighty God.”

“Is it time for us to stop complaining about what is, and start believing what will be if God’s people on their faces in humility and brokenness will once again ask for His hand of providence to envelope this great land of ours,” he said. 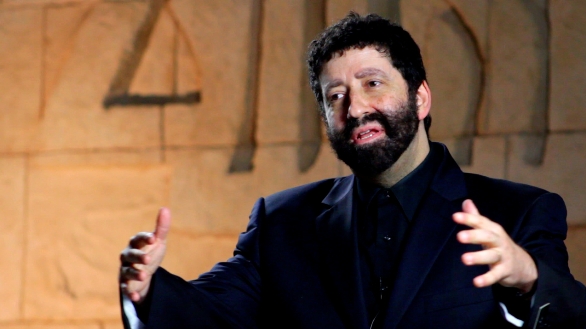 “The propitious smile of heaven can never be expected on a nation that disregards the eternal rules of order and right which heaven itself hath ordained,” Cahn said, quoting George Washington from his 1789 inaugural speech.

“We stand tonight on Capitol Hill,” Cahn then added, “in the city named after the one who gave that prophetic warning, to ask can a nation that drive out the name of God from its public square, the Word of God from its schools and the ways of God from its culture and still expect the smiles of God to shine upon it?”

The talk by Rabbi Cahn was part of an event hosted by Minnesota Representative Michelle Bachmann and emceed by former Arkansas governor Mike Huckabee.  Many government officials, members of Congress and members of the judiciary were in attendance.

Rabbi Cahn spared no member of the government in his comments regarding removal of the truth of Christ from the country.

“Can the blood of 50 million unborn children cry out to heaven from this land and the smiles of heaven still remain?

“Members of Congress, can a government call evil good and good evil and forge laws that war against the laws of the Almighty and the smiles of heaven still remain?

“Supreme Court justices, can you strike down the statutes of the Almighty and overturn the judgments of the Most High and still expect the smiles of heaven to remain?

“Mr. President, can you place your left hand on the Word of God to assume your office and with your right hand sign laws which break the very Word upon which you swore and still expect the smiles of heaven to remain?

“The voice of our first president cries out to us tonight and answers, no you cannot do so and still expect the smiles of heaven to remain on this land.”

The event was broadcast online via World News Daily.

“These are the things that I know,” Huckabee said.  “I know there is a God, and I know this nation would not exist had he not been the midwife of its birth.   And I know that this nation exists by the providence of his hand, and if this nation forgets our God, then God will have every right to forget us.”

“I hope that we repent before we ever have to receive his fiery judgment,” Huckabee continued.

Huckabee was particularly pointed on the issue of abortion.

“A society that sacrifices its own children is no better than the ancient Philistines,” Huckabee said.