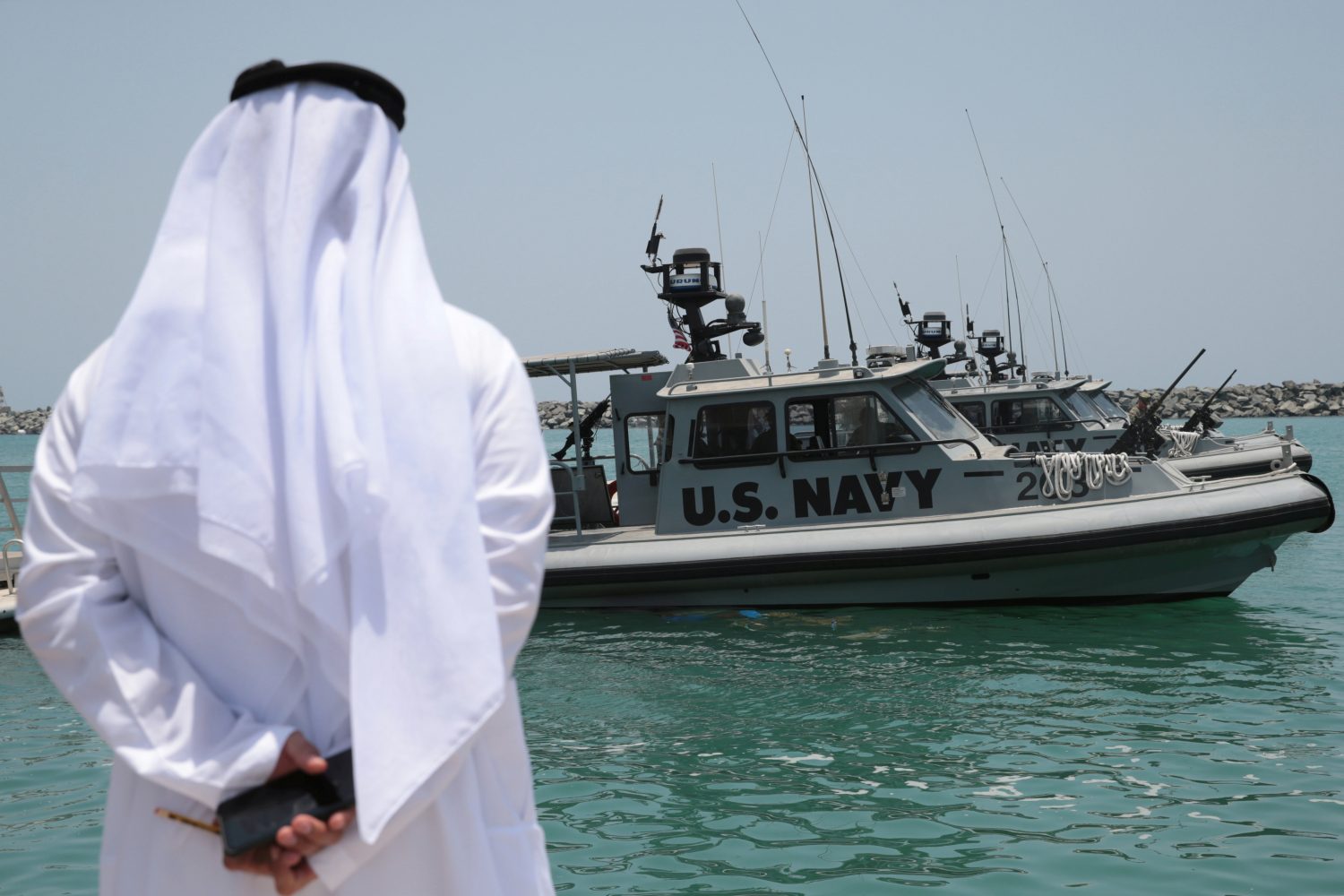 FUJAIRAH, United Arab Emirates (Reuters) – The United States sought on Wednesday to bolster its case for isolating Iran over its nuclear and regional activities by showing limpet mine fragments it said came from a damaged oil tanker and saying the ordinance looked Iranian in origin.

The Islamic Republic has denied involvement in explosive strikes on two tankers in the Gulf of Oman last week and four tankers off the United Arab Emirates on May 12, both near the Strait of Hormuz, a major conduit for global oil supplies.

But the incidents have fueled tensions that broke out with the U.S. pullout last year from world powers’ 2015 nuclear accord with Iran, followed by fresh U.S. sanctions to stifle Tehran’s vital oil trade, and a retaliatory Iranian threat this week to resume uranium enrichment in breach of the deal.

France and Germany said on Wednesday they would crank up efforts to halt any spiral toward conflict with Iran, but time was running out and the risk of war could not be ruled out.

Iran’s signal of preparedness to stockpile enriched uranium beyond the deal’s limit, and refine uranium to a fissile purity higher than deemed necessary for civilian uses, prompted U.S. President Donald Trump to warn on Tuesday he was ready to take military action to stop Tehran developing a nuclear bomb.

Iran denies it has such intentions.

But Trump also left open whether he would support the use of force to protect Gulf oil supplies Washington fears might be put in jeopardy by Iran in the brewing confrontation.

“We want to unify our efforts so that there is a de-escalation process that starts,” French Foreign Minister Jean-Yves Le Drian told reporters in Paris.

Iran, where hardline foes of detente with the West have been strengthened by Trump’s pressure campaign, said on Wednesday it would give European powers no more time beyond July 8 to save the nuclear deal by shielding its economy from U.S. sanctions.

President Hassan Rouhani said Iran&rsquo;s actions were the “minimum” Tehran could do one year after the United States withdrew from the deal, but said its steps were reversible “if they return to their commitments”.

In another incident likely to aggravate the stand-off, a rocket crashed onto a site in southern Iraq used by foreign oil companies on Wednesday, including U.S. energy giant ExxonMobil, wounding three people.

There was no immediate claim of responsibility for the attack near the southern Iraqi city of Basra, not far from the Iranian border – the fourth time in a week that rockets have struck near U.S. installations.

An Iraqi security source said it appeared that Iran-backed groups in southern Iraq were behind the Basra incident.

In the United Arab Emirates port of Fujairah on Wednesday, the U.S. Navy displayed pieces of limpet mines and a magnet it said its personnel extracted from one of two oil tankers attacked in the Gulf of Oman last week.

The U.S. military earlier released images it said showed Iranian Revolutionary Guards removing an unexploded mine from Japanese-owned tanker Kokuka Courageous, which was hit by blasts along with Norwegian-owned Front Altair tanker on June 13.

“The limpet mine that was used in the attack is distinguishable and also strikingly bearing a resemblance to Iranian mines that have already been publicly displayed in Iranian military parades,” Sean Kido, commanding officer of an explosive ordnance dive and salvage task group in the U.S. Naval Forces Central Command (NAVCENT), told reporters.

Small fragments said to have been removed from the Kokuka Courageous were on display alongside a magnet purportedly left by the Revolutionary Guard squad allegedly captured on video.

The Japanese company that owns the Kokuka Courageous had said its ship was damaged by two “flying objects”, but NAVCENT dismissed this.

“The damage at the blast hole is consistent with a limpet mine attack, it is not consistent with an external flying object striking the ship,” Kido said, adding that nail holes visible in the hull indicated how the mine was attached to the ship’s hull.

The location of the mine above the ship’s waterline indicated the intention was not to sink the vessel, he said.

Two Western security sources told Reuters this week the attacks seemed calibrated to inflict only limited damage and avoid injury to show Iran could sow chaos if it wanted to, possibly to persuade Washington and other foes to back off rather than trigger conflict.

Kido also said NAVCENT had collected biometric information including fingerprints from the ship’s hull that would help in crafting a criminal case against the assailants.

The United States and Saudi Arabia have pointed fingers at Iran for all the tanker attacks, but several European nations have said more evidence is needed.

“The dynamics of the two attacks are not clear, and the video that the U.S. said demonstrated Iran’s role was also not clear,” a Western diplomat in the Gulf told Reuters.