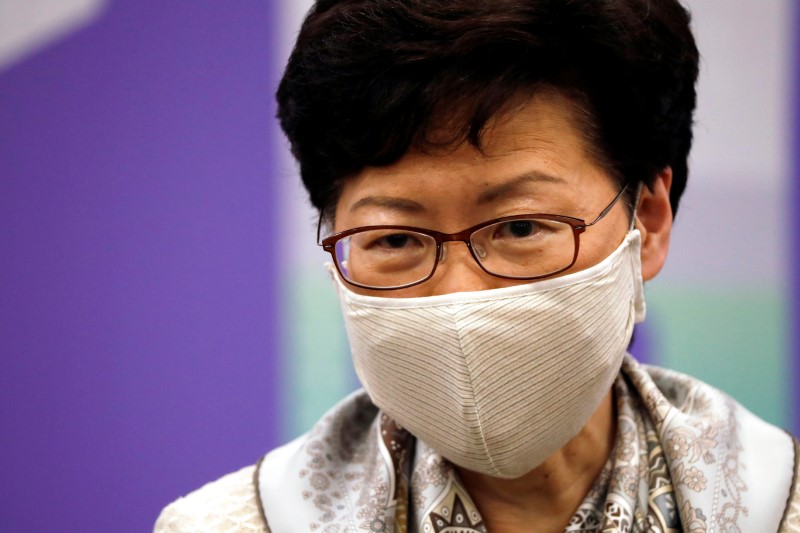 By Jessie Pang and Yoyo Chow

HONG KONG (Reuters) – Hundreds of protesters gathered in central Hong Kong on Tuesday to mark a year of sustained pro-democracy rallies as fears over looming national security legislation have reignited unrest in the global financial hub.

The crowd defied a government ban on gatherings of more than eight people due to the coronavirus, as well as a heavy riot police presence on the streets, with officers repeatedly seen conducting searches on those passing through the area.

“I am scared but I need to protest against national security laws. It’s important to continue to fight for freedom,” said 25-year-old Tai, who declined to give his full name.

Last year on June 9, an estimated more than one million protesters took to the streets against proposed legislation to allow extraditions to mainland China, where the courts are controlled by the Communist Party.

The government later withdrew the bill but widespread concern lingered that Beijing was stifling freedoms in the former British colony, sparking months of often-violent unrest.

Hong Kong leader Carrie Lam warned on Tuesday that the city, which has enjoyed a high degree of autonomy since returning to Chinese rule in 1997, cannot afford further “chaos.”

“All of us can see the difficulty we have been through in the past year, and due to such serious situations we have more problems to deal with,” Lam told a weekly news conference.

Almost 9,000 people, aged between 11 and 84, were arrested in protests over the past year, police said late on Monday. More than 600 were charged with rioting.

“The crackdown is getting more and more severe,” said gym trainer Lee, 32.

More protests are planned in the coming days and union leaders have said they intend to hold a referendum among their members on Sunday on whether to launch a city-wide strike.

Authorities have insisted the laws will focus on small numbers of “troublemakers” who pose a threat to national security and will not curb freedoms or hurt investors. Lam cautioned against the strike plans.

Prominent pro-democracy activist Joshua Wong said the world had witnessed “the deteriorating situation in Hong Kong, with Beijing tightening its grip over the city’s liberties”.

“I have strong confidence in Hongkongers that we will have ways to resist and defy,” Wong posted on Twitter. “Moreover, I hope the world can stand with Hong Kong and protect the city from falling.”

Washington has said it would remove Hong Kong’s special treatment in U.S. laws as it deemed the city to no longer be sufficiently autonomous. The European Union, Britain and others have expressed concerns about the proposed legislation, while Beijing hit back against foreign meddling in its affairs. 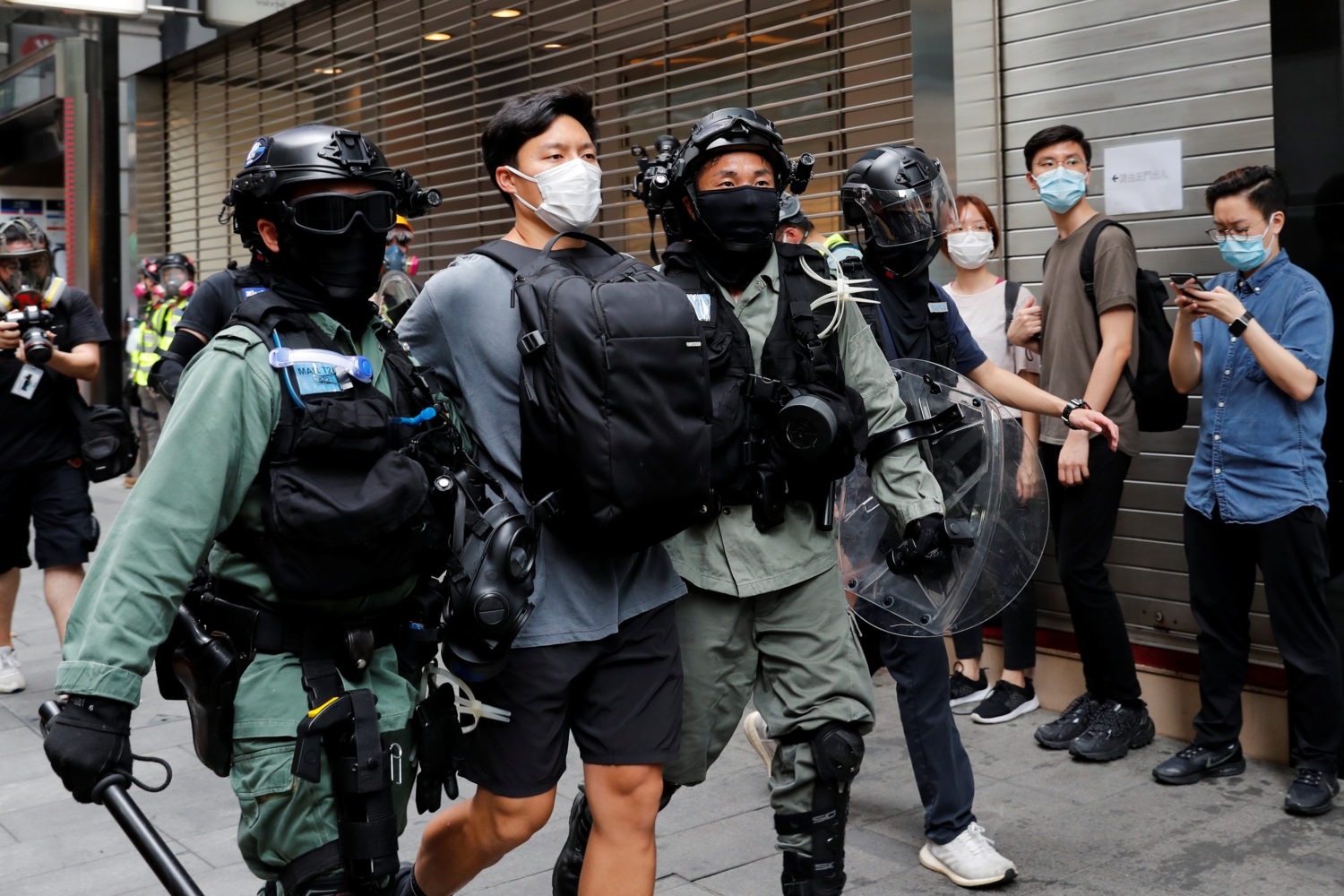 By Sarah Wu and Clare Jim

HONG KONG (Reuters) – Police in Hong Kong fired pepper pellets and made 300 arrests as thousands of people took to the streets on Wednesday to voice anger over national security legislation proposed by China, that has raised international alarm over freedoms in the city.

In the heart of the financial district, riot police fired pepper pellets to disperse a crowd, and elsewhere in the city police rounded up groups of dozens of suspected protesters, making them sit on sidewalks before searching their belongings.

A heavy police presence around the Legislative Council deterred protesters planning to disrupt the debate of a bill that would criminalize disrespect of the Chinese national anthem. The bill is expected to become law next month.

Angry over perceived threats to the semi-autonomous city’s freedoms, people of all ages took to the streets, some dressed in black, some wearing office clothes or school uniforms and some hiding their faces beneath open umbrellas in scenes reminiscent of the unrest that shook Hong Kong last year.

“Although you’re afraid inside your heart, you need to speak out,” said Chang, 29, a clerk and protester dressed in black with a helmet respirator and goggles in her backpack.

The United States, Britain, the European Union and others have expressed concern about the legislation, widely seen as a possible turning point for China’s freest city and one of the world’s main financial hubs.

But Chinese authorities and the Beijing-backed government in Hong Kong say there is no threat to the city’s high degree of autonomy and the new security law would be tightly focused.

U.S. President Donald Trump, already at odds with Beijing over trade and the novel coronavirus pandemic, said on Tuesday the United States would this week announce a strong response to the planned legislation.

China responded by saying it would take necessary countermeasures to any foreign interference.

Asian shares slipped over the rising tension between the United States and China. Hong Kong’s bourse < led declines with a 0.46% drop.

Protesters in a downtown shopping mall chanted “Liberate Hong Kong! Revolution of our times” and “Hong Kong independence, the only way out”.

One protester was seen with a placard reading “one country, two systems is a lie”, referring to a political system put in place at Britain’s 1997 handover of the city to China, which is meant to guarantee Hong Kong’s freedoms until at least 2047.

“I’m scared … if you don’t come out today, you’ll never be able to come out. This is legislation that directly affects us,” said Ryan Tsang, a hotel manager.

As the protests in the financial district died down, hundreds of people gathered in the working-class Mong Kok district on the Kowloon peninsula, where protests flared repeatedly last year. Marchers there briefly blocked roads before being chased away by police.

About 300 people were arrested, most for illegal assembly, in three districts, police said. 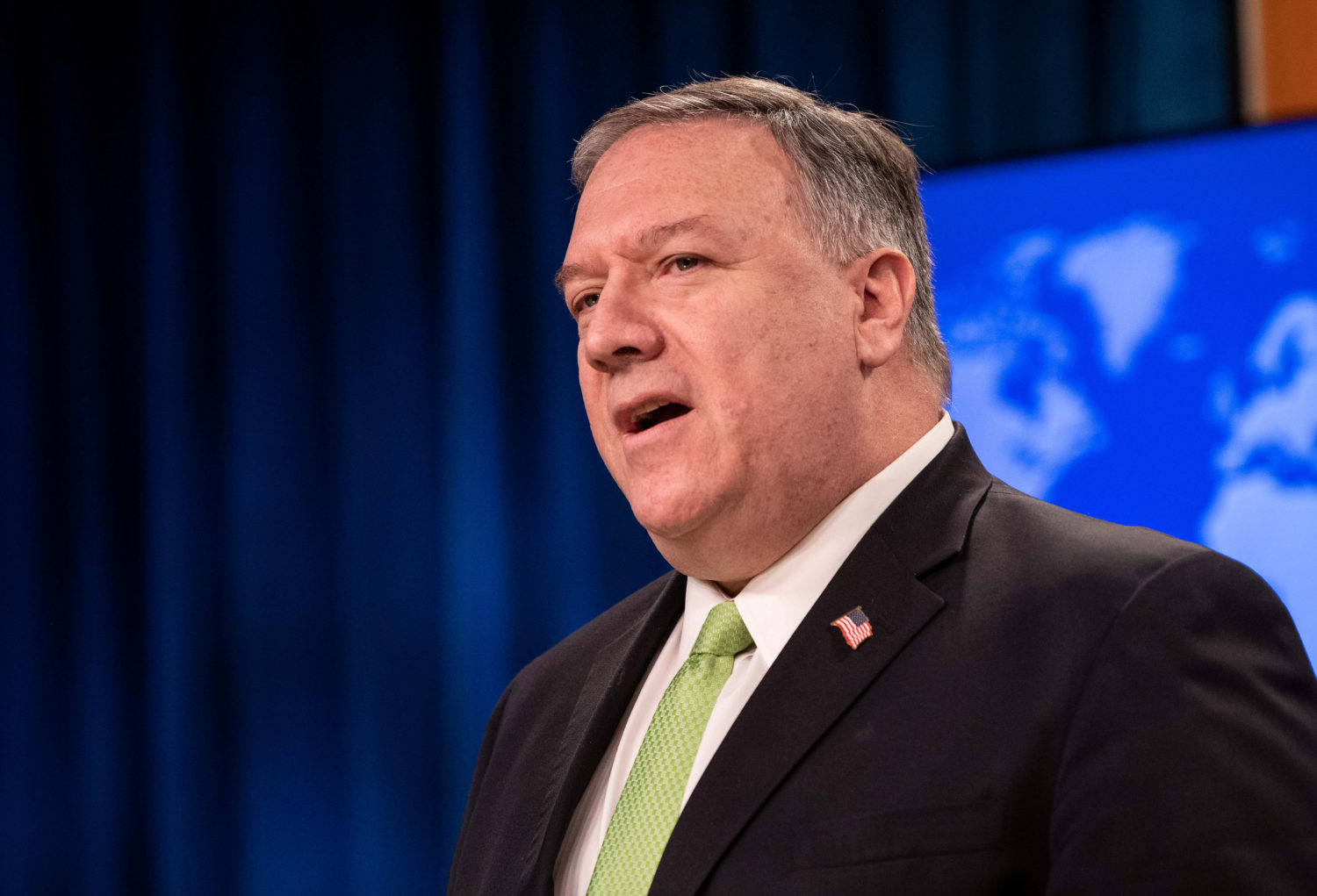 WASHINGTON (Reuters) – U.S. Secretary of State Mike Pompeo on Friday called China’s proposed national security legislation on Hong Kong disastrous and said it could have an impact on the favorable economic treatment the territory receives from the United States.

“The United States strongly urges Beijing to reconsider its disastrous proposal, abide by its international obligations, and respect Hong Kong’s high degree of autonomy, democratic institutions, and civil liberties, which are key to preserving its special status under U.S. law.”

Robert O’Brien, Trump’s national security adviser, told Fox News on Thursday Washington has “lots of tools to express our displeasure.” Neither he nor Pompeo detailed actions Washington might take.

“There are privileges that Hong Kong accrues because it’s considered a free system. We’d have to look over whether those concessions could continue to be made,” he said.

“If China moves forward and takes strong action under this new national security law … America will respond, and I think other countries in the world will respond, including the United Kingdom and many other of our allies and friends.”

Former Vice President Joe Biden, Trump’s likely challenger in November’s election, on Friday assailed Trump for what he characterized as his silence on human rights issues. If the State Department decertifies the territory, it ultimately falls to Trump to decide which of Hong Kong’s privileges to deny.