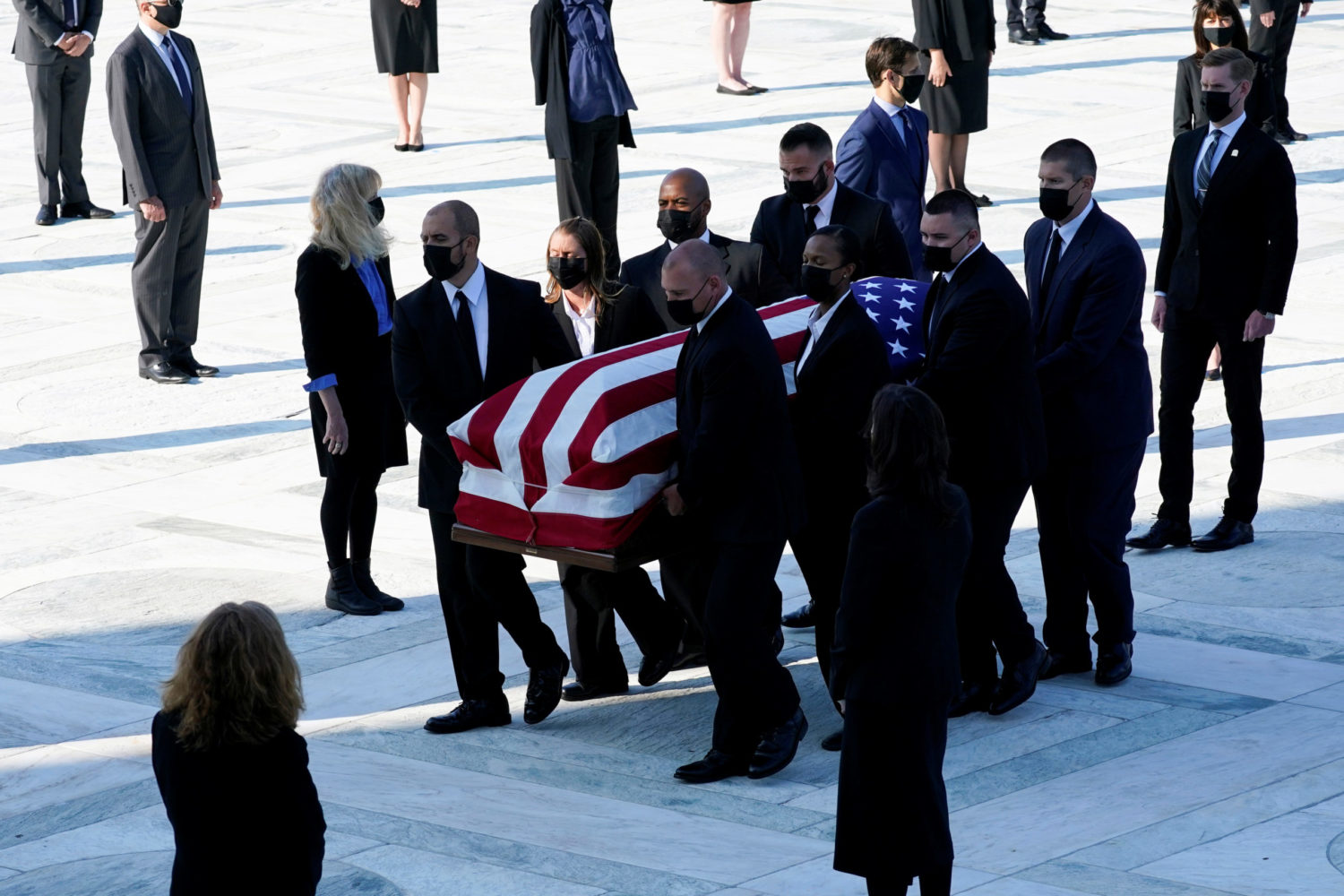 WASHINGTON (Reuters) – The United States began three days of tributes to Supreme Court Justice Ruth Bader Ginsburg on Wednesday, as pallbearers carried her flag-draped coffin into the white marble court building and members of the public lined up to pay their respects.

Wearing dark suits and black face masks due to the coronavirus pandemic, dozens of the liberal icon’s former clerks stood at attention as the coffin was carried up the court’s broad steps and into the Great Hall, where a private ceremony was planned for friends and family.

Members of the public watched from behind barricades as they awaited a public viewing due to start at 11 a.m. (1500 GMT).

“It’s almost like I felt the hand of God on my shoulder saying you have got to come and pay your respects to this person who was a fierce champion of women’s voices and women’s rights,” said Cecilia Ryan, 64, who drove 12 hours from the Chicago area.

Ginsburg, who over the course of her long legal career championed gender equality and other liberal causes, in recent years became something of a pop icon for the American left. She died on Friday at age 87.

After two days of public viewing under the neoclassical court building’s massive Corinthian columns, Ginsburg will on Friday become the first woman to lie in state in the U.S. Capitol when her casket is placed in National Statuary Hall.

Civil rights pioneer Rosa Parks was also mourned at the Capitol in a similar ceremony in 2005, but as someone who did not hold government or military office, she lay “in honor,” not “in state.”

Both historic events for Ginsburg, however, come with modifications due to the coronavirus pandemic.

U.S. House of Representatives Speaker Nancy Pelosi said that, due to the pandemic, a formal ceremony to be held on Friday morning will be limited to invited guests only.

At the courthouse, which remains closed to the public due to the pandemic, the justice will lie in repose under the portico outdoors to allow for public viewing starting at 11 a.m. (1500 GMT).

Officials said social distancing and face coverings will be required to participate to guard against the spread of the virus. Flowers and other offerings are forbidden on the court’s plaza or its great flight of steps.

The justices for the first time in the court’s history heard oral arguments in May by teleconference, and will do so again next month. Though the building is closed, Ginsburg’s courtroom chair and the bench in front of it have been draped with black wool crepe to mark the occasion, a tradition that dates back at least to 1873. A black drape has also been hung over the courtroom doors.

“On a personal level, she was such an amazing person. She had a mind like a steel trap,” said Jill Alexander, 59, whose husband served as a clerk for Ginsburg when she was an appeals-court judge.

Inside the courthouse, the coffin was due to be moved on to the Lincoln catafalque, a pine board platform draped in black cloth that was used to support President Abraham Lincoln’s coffin when he lay in state in the Capitol’s Rotunda after his assassination in 1865. The catafalque was loaned to the court by the U.S. Congress for the ceremony. A 2016 portrait Ginsburg by Constance P. Beaty will be on display in the hall.

Public viewing runs until 10 p.m. on Wednesday and between 9 a.m. until 10 p.m. on Thursday. A private interment service is planned for next week at Arlington National Cemetery. Ginsburg’s husband, Martin Ginsburg, was buried there in 2010.

(Reporting by Lawrence Hurley and Andrew Chung; Writing by Andy Sullivan; Editing by Will Dunham and Scott Malone)