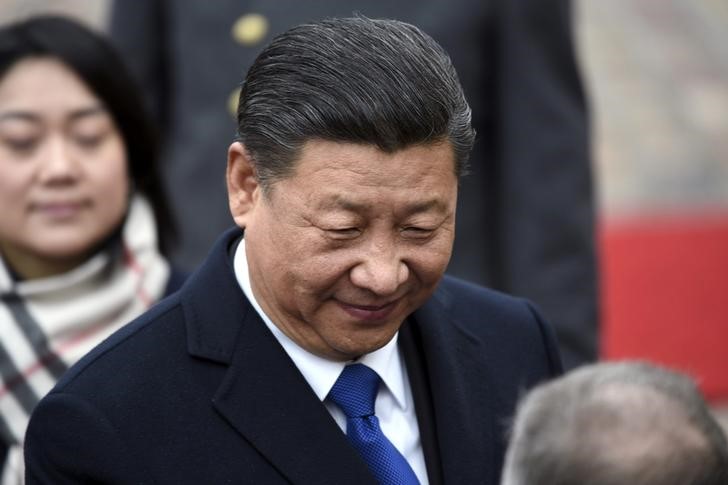 BEIJING (Reuters) – China will gather its friends and allies together for its biggest diplomatic event of the year in May, a summit on its New Silk Road plan, with most Asian leaders due to attend but only one from a G7 nation, the Italian prime minister.

President Xi Jinping has championed what China formally calls the “One Belt, One Road” or OBOR, initiative to build a new Silk Road linking Asia, Africa and Europe, a landmark program to invest billions of dollars in infrastructure projects including railways, ports and power grids.

China has dedicated $40 billion to a Silk Road Fund and the idea was the driving force behind the establishment of the $50 billion China-backed Asian Infrastructure Investment Bank.

“One Belt, One Road is to date the most important public good China has given to the world, first proposed by China but for all countries to enjoy,” Wang said.

“The culture and historical genes of One Belt, One Road come from the old Silk Road, so it takes Eurasia as its main region,” he said, adding that representatives of 110 countries would attend.

While China says the New Silk Road is not political, it has run into opposition from India due to a section of it in Pakistan, known as the China-Pakistan Economic Corridor, where some projects run through the disputed Kashmir region.

Wang dismissed those concerns, saying the Pakistan project had no direct connection to the dispute and India was welcome to participate in the New Silk Road.

“Indian friends have said to us that One Belt, One Road is a very good suggestion,” he said.

Nevertheless, India Prime Minister Narendra Modi was not on the list of leaders attending.

Wang also made no mention of any attendance of officials from Japan, South Korea or North Korea, all countries with which China has strained ties. Nor was there mention of Australia, a strong U.S. ally that has close trade links with China.

The list included only one leader from the Group of Seven (G7) industrialised nations, Italian Prime Minister Paolo Gentiloni.

Diplomatic sources in Beijing said China had hoped for at least some senior Western leaders to attend, including British Prime Minister Theresa May, to burnish the plan’s credentials and make it less China-centric.

British finance minister Philip Hammond will come as May’s representative, while Germany and France are having elections at the time and will send high-level representatives, Wang said.

Wang confirmed Philippine President Rodrigo Duterte as among 28 leaders coming, along with the Spanish, Greek, Hungarian, Serb and Polish prime ministers and Swiss and Czech presidents.

“This is a positive, cooperative agreement, and we don’t want to politicize it,” Wang told reporters when asked if China was upset at the absence of most major Western leaders.

“This is an economic cooperation forum, an international cooperation platform that everyone is paying attention to, supports and hopes to participate in,” he said.

China is sensitive to any suggestion that what it sees as its benign intentions do not have a receptive global audience, especially in Western capitals.

China was privately upset in 2015 after most Western leaders rebuffed invitations to attend a big military parade marking 70 years since the end of World War Two. Western leaders were unhappy that the guest list that included Putin and wary of the message China would send with the show of strength.

While China has portrayed the New Silk Road as a genuine effort to share the bounty of China’s economic development and to fund infrastructure gaps, many Western countries are concerned about a lack of detail and transparency in the project and are suspicious about China’s broader political intents.

Diplomatic sources said the presence of Putin and other leaders from countries with dubious human rights records, like the Philippines and Central Asian states, had contributed to a reluctance among Western leaders to attend.

Still, at a time of uncertainty about the U.S. place in the world following President Donald Trump’s pledges to put America first, China sees an opportunity to become more of a global leader and has found a receptive audience for its New Silk Road.

Leaders from countries that would appear to have little, if any, connection so far to the plan are coming to the summit, including Chile and Argentina.

“Everyone wants to be China’s friend now with Trump in office,” said a senior Asian diplomat in Beijing.

A senior Indonesian government official said China was aiming for a “spectacular” summit.

“The Chinese are gunning for … global leadership so I think this OBOR summit is going to be huge,” the official said.