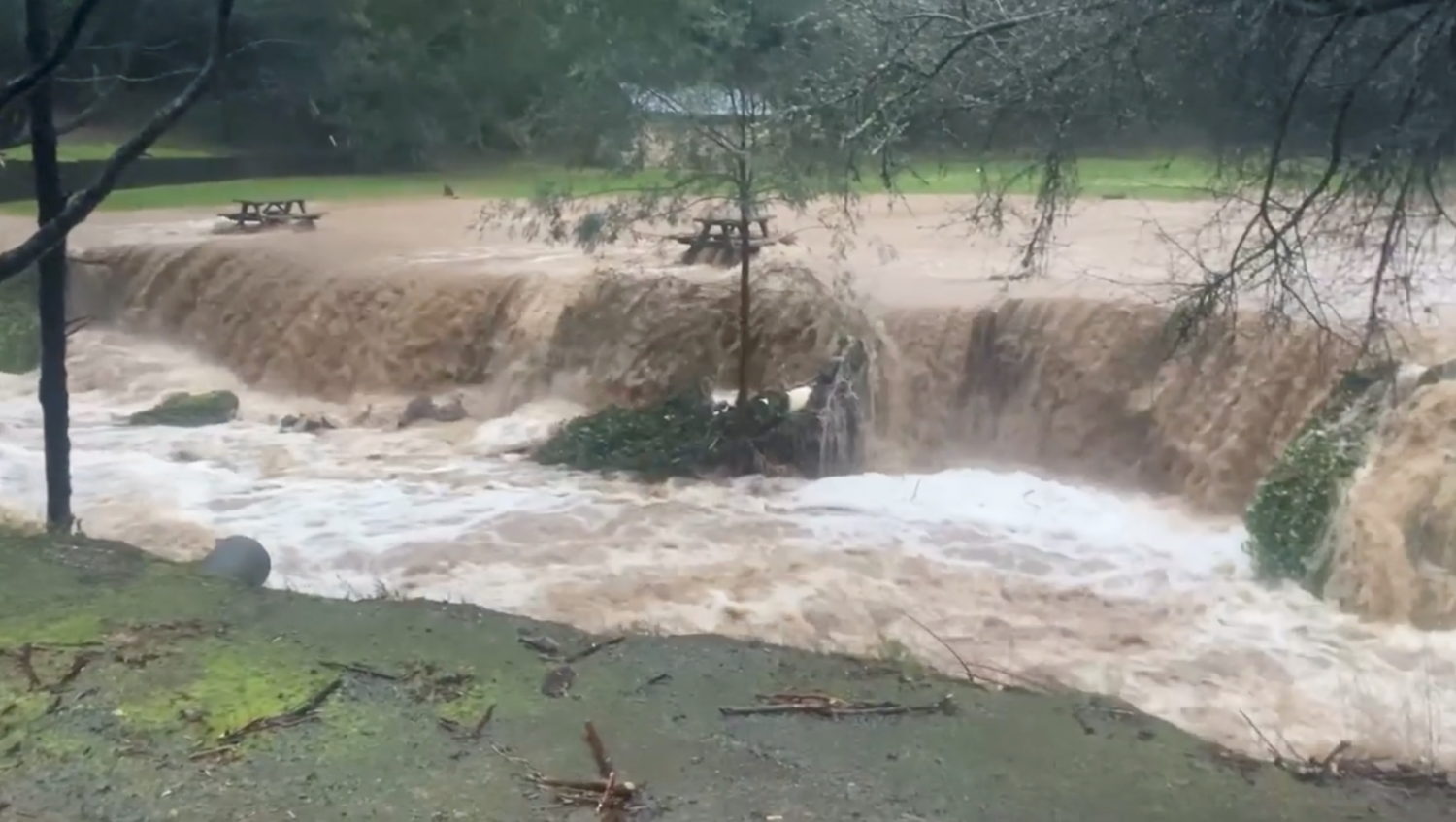 SYDNEY (Reuters) – Australians across the east of the country awoke to wild and frosty winter conditions on Thursday, with flash flooding causing at least one fatality while large snow dumps fell across neighboring New South Wales.

Cold air from the Antarctic dropped temperatures in Sydney, the country’s most most populous city, to just 10 degrees Celsius (50 degree Fahrenheit), a 37-year record.

“I’m quite sure all of us want to get out and build a snowman,” Kevin Beatty, the mayor of Cabonne Shire, one of the inland towns to receive a snow dump, told the Australian Broadcasting Corporation.

A subsequent low pressure weather system brought flooding in some areas, leading to at least one fatality in Victoria state.

Authorities urged 26,000 residents in the town of Traralgon, some 161.9 KM (100.6 miles) west of Melbourne to evacuate. Police later reported they had found the body of a man in a vehicle submerged in flood waters. 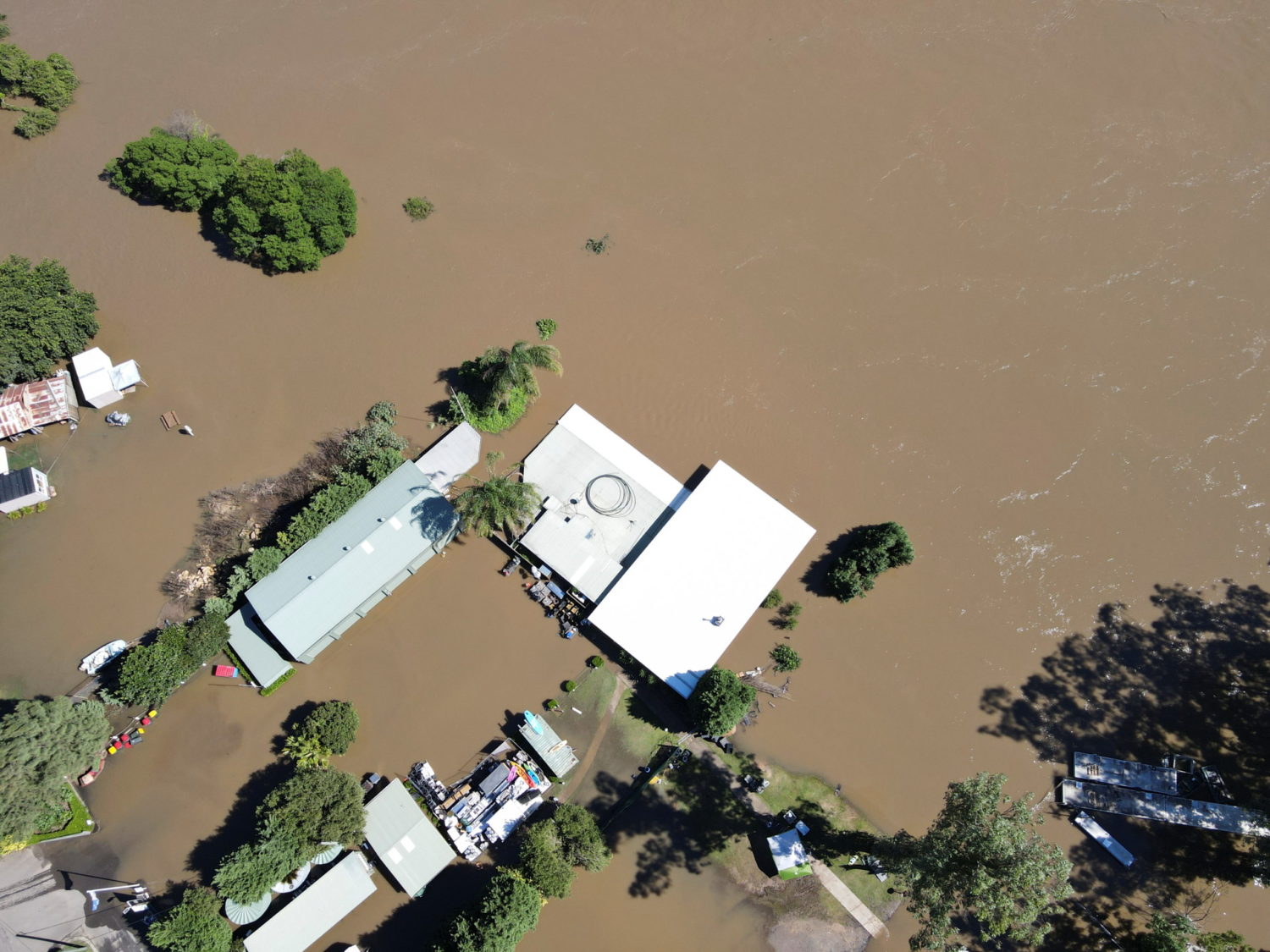 By Renju Jose and Jonathan Barrett

SYDNEY (Reuters) -The bodies of two men were found in Australia on Wednesday in cars trapped in floodwaters, the first deaths linked to wild weather in recent days that has submerged houses, swept away livestock and cut off entire towns.

More than 40,000 people have been forced to flee their homes as torrential rain sparked dangerous flash floods, and authorities issued new evacuation orders for residents of Sydney’s western regions to move to safety.

In some other areas, a massive clean-up operation began as sunny skies returned for the first time in days, and food and other emergency supplies were flown in over swamped roads.

Authorities were trying to contact the family of a Pakistani national whose body was found by emergency services in a car under six meters of water in Sydney’s northwest.

Police had determined the man was driving a brand new car, on the first day of a new job and unfamiliar with the rural area, New South Wales Police Detective Inspector Chris Laird told media. The reason he could not get out of the vehicle was being investigated.

“It could very well be that the electrics totally failed and he was simply unable to escape from the car which is an absolute tragedy,” Laird said.

Gladys Berejiklian, premier of New South Wales, the worst-hit state, warned that water levels would keep rising in some areas as major dams overflowed and rivers bulged, with thousands of people were on evacuation watch.

“Catchments will continue to experience flows of water not seen in 50 years and in some places 100 years,” Berejiklian told reporters in Sydney.

The Insurance Council of Australia, the main industry body, said about 17,000 damages claims worth about A$254.2 million ($193.32 million) had been lodged by Wednesday morning across New South Wales and Queensland.

Homes have been submerged, livestock swept away and crops inundated.

There have also been many animal rescues, with craft used to move dogs, cattle, and even an emu, away from the flood waters. In the country’s arid center, water cascaded down the Uluru rock formation, a rare phenomenon described by the national park as “unique and extraordinary”.

“The expanse of water that went right across that region was quite devastating to see,” Morrison said in parliament after he toured flood-affected areas by helicopter.

Several hundred defense force personnel would be sent to flood-affected areas over the next few days to help in the recovery, said Emergency Management Minister David Littleproud.

“Their job will be out there cleaning up, making sure that we get rid of the debris, having boots on the ground,” Littleproud said.

The Port of Newcastle, which last year shipped 158 million tonnes of coal, slowed ship movements this week but said on Wednesday it was continuing to operate.

Forecasters said the weather system that brought the rain would shift to the island state of Tasmania on Wednesday, bringing downpours and flooding. 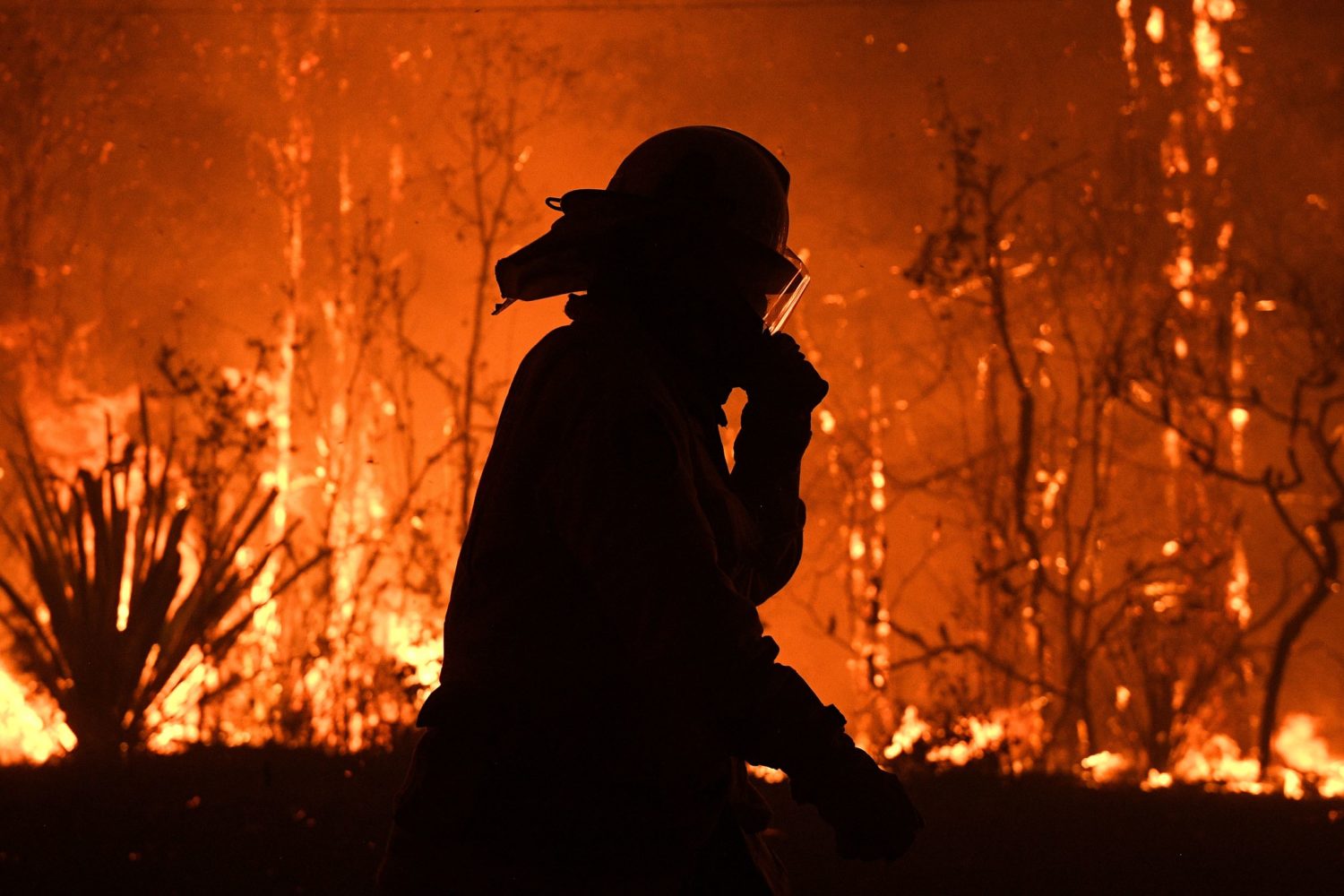 Wildfire has killed at least four people and destroyed more than 680 homes across eastern Australia since the start of November, months earlier than the usual summer bushfire season, with the authorities blaming an extended drought, strong wind and suspected arson.

Smoke and flying ash has lingered over Sydney for most of the past week, turning the daytime sky orange, obscuring visibility and prompting commuters to wear breathing masks. Satellite images spread on social media showed the smoke spreading across the Tasman Sea to New Zealand, 2,000 kilometers (1,240 miles) away.

“The massive #NSW fires are in some cases just too big to put out at the moment,” wrote the Australian Bureau of Meteorology in a post on its official Twitter account.

Sydney is the capital city in New South Wales state.

The New South Wales Rural Fire Service (RFS) said in a tweet that “a number of fires in the Hawkesbury, Hunter and Central Coast areas have now joined”. The tweet included a map showing 10 separate fires connecting about 50 kilometers north of metropolitan Sydney.

“They have the potential or are expected to spread further east, which unfortunately is getting into more populated areas, villages, communities, isolated rural areas, and other farming practices and businesses throughout the region,” Fitzsimmons told reporters in Sydney. 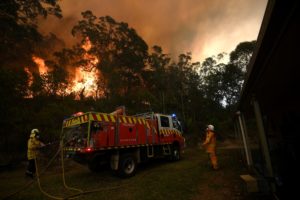 About 500 homes in coastal communities around 350 kilometers south of Sydney had lost electricity to fire and repair workers were unable to start restoring power until the area was declared safe, energy provider Endeavour Energy said in a tweet. “Affected customers should consider alternative accommodation until their power is back.”

“We appreciate this may mean some finals are not played and players may be disappointed, however the welfare of our cricket communities is our number one priority,” Cricket NSW CEO Lee Germo said in a statement. 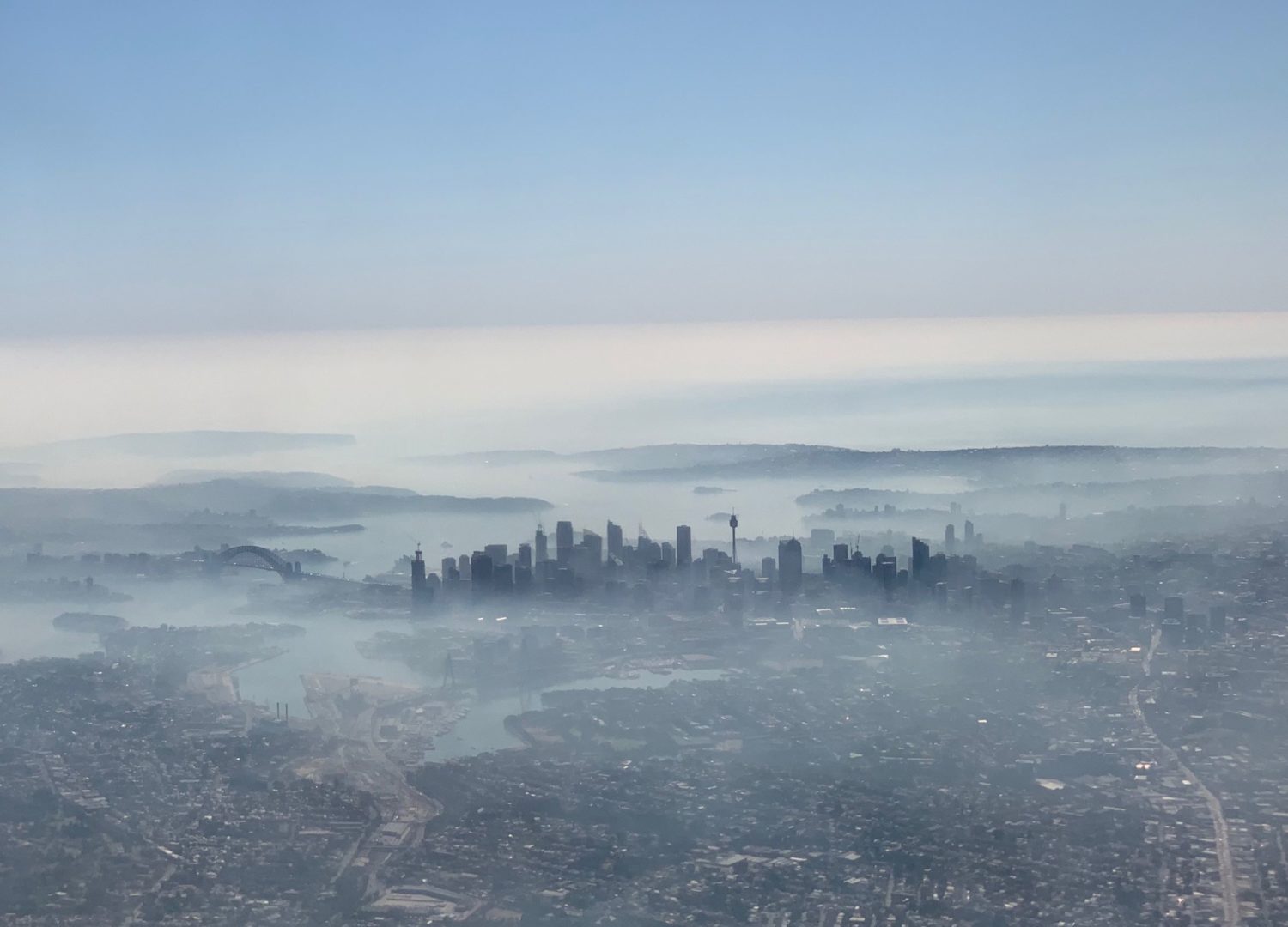 Australia is prone to bushfires in its dry, hot summers, but fierce blazes have been sparked early, in the southern spring, by a long drought and soaring temperatures.

Wildfires have so far this month claimed at least four lives, burnt about 2.5 million acres (1 million hectares) of farmland and bush and destroyed more than 300 homes.

Powerful winds fanned around 130 fires that have been burning across New South Wales and Queensland states for several days, and pushed smoke south to form a thick haze over Sydney, home to around 5 million people.

Officials said the air quality above parts of the harbor city was measured at 10 times hazardous levels on Tuesday and advised people to stay indoors as much as possible as the smoke lingers over coming days.

“We know that heatwaves cause severe illness, hospital admission and even deaths, and that people are more sensitive to heatwaves early in the season,” Richard Broom, director of environmental health at NSW Health said In an emailed statement.

“The combination of heat and poor air quality adds to the risk.”

In NSW, firefighters were scrambling to strengthen fire containment lines ahead of forecast higher temperatures for much of the rest of the week.

“More than 1,300 firefighters are working on these fires, undertaking backburning operations and strengthening containment lines ahead of forecast hot, dry and windy weather, with seven areas under a total fire ban,” the NSW Rural Fire Service said in a statement.

The current bushfire crisis has mostly been contained to the east coast of NSW and Queensland states, but officials in South Australia warned on Tuesday that forecast near-record temperatures raises the risks in that state.

SYDNEY (Reuters) – Australian authorities urged people to remain alert on Monday as bushfires that have destroyed dozens of homes, killed cattle and forced hundreds of residents to flee continued to burn out of control in the southeast of the country.

No deaths or serious injuries were reported on Monday but the bushfires have caused extensive damage in rural areas of Victoria and New South Wales (NSW), Australia’s two most populous states. More than 100 houses were damaged or destroyed, authorities said.

“At this stage (there have been) no lives lost,” Prime Minister Malcolm Turnbull said at a news conference in the small NSW coastal town of Tathra.

“It is just a great credit to the firefighters, to the volunteers, the emergency workers – all of the community has pulled together and provided such great support,” he said.

The fires, believed to have been sparked by lightning on Saturday, were fanned by dry, hot winds as temperatures reached 41 degrees Celsius (106 Fahrenheit) on Sunday.

Emergency officials said conditions should ease later on Monday but “watch and act” warnings remained in place for five locations. 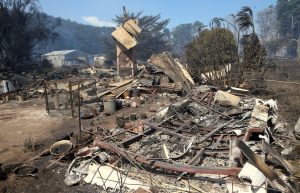 A house thats has been destroyed by a bushfire can be seen near the town of Cobden, located south west of Melbourne in Australia, March 18, 2018. AAP/David Crosling/via REUTERS

The fire also set off an argument among Australia’s politicians on whether climate change was a contributing factor to the blazes.

“You can’t attribute any particular event, whether it’s a flood or fire or a drought …to climate change. We are the land of droughts and flooding rains, we’re the land of bushfires,” Turnbull said.

Authorities said some 69 houses were destroyed and a further 39 were damaged and 30 caravans or cabins were also wiped out in Tathra, where residents fled to the beach on Sunday to avoid the flames as flying embers quickly carried the firefront forward.

About 700 residents were evacuated to centers set up at the nearby town of Bega and several schools in affected areas were closed on Monday.

NSW Rural Fire Service Deputy Commissioner Rob Rogers earlier told the Australian Broadcasting Corporation that five of 22 fires had not yet been contained.

“There’s still a lot of fire around the landscape,” he said, warning that it would still be several days before they were extinguished.

About 280 firefighters were battling the blazes, while 22,000 homes were without power in the region after high winds brought down trees, Emergency Management Commissioner Craig Lapsley said late on Sunday.

In January, hundreds of holidaymakers had to be evacuated by boat from the beaches of the Royal National Park south of Sydney when they became trapped by bushfires.

The 2009 Black Saturday bushfires in Victoria killed 173 people and injured more than 400.

(Reporting by Jane Wardell and Tom Westbrook in SYDNEY; Additional reporting by Melanie Burton in MELBOURNE; Editing by Susan Fenton and Paul Tait)