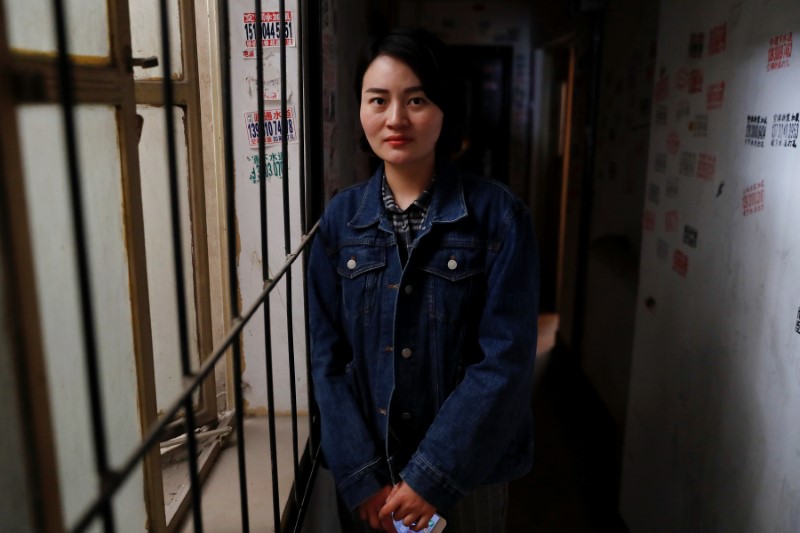 BEIJING (Reuters) – When a team of Chinese state security agents picked up Li Wenzu and then prevented her from leaving her own home last week, she was scared but not surprised.

She was detained on the seventh day of a protest march she organized in an attempt to get the authorities to explain what has happened to her husband, Wang Quanzhang, a lawyer who has been missing since August 2015 during a sweeping crackdown on rights activists.

Li was initially barricaded in her home by dozens of people, including plainclothes security officers and members of the local neighborhood committee, she said. Scuffles broke out between her supporters and the crowd, according to videos shared with Reuters.

While Li was permitted to leave and go to a friend’s home the following day, her experience of being sporadically placed under house arrest and pressured by the Chinese authorities to stay quiet has become commonplace for the families of Chinese rights activists, they say.

Such “soft” detention measures are currently being used in dozens of cases, according to the rights groups, including that of Liu Xia, the widow of Chinese Nobel Peace Prize-winning dissident Liu Xiaobo. He died of liver cancer last July while in custody.

Many of these individuals have never been charged with any crime, but are treated as guilty by association and as a threat to national security due to the embarrassment they can cause for the Chinese state if they speak out, rights groups say.

Those affected complain of their homes being bugged, phones tapped and of security cameras being installed outside their front doors. But the main method of repression, they say, is being monitored in person by China’s state security agents.

China’s ministry of state security could not be reached for comment as it does not have publicly available telephone numbers. China’s public security ministry did not respond to a faxed request for comment.

Since coming to power in 2013, Chinese President Xi Jinping has overseen a sweeping crackdown on rights lawyers and activists, with hundreds detained and dozens jailed.

Li said the freedom she was given after her brief house arrest was in her experience “only temporary”, as state security officials have become a regular presence for her and her young son.

“In 2016, state security for a period rented a flat on the second floor of my building,” Li told Reuters in an interview at her friend’s home.

The agents are often outwardly friendly and tell Li they are there to protect her safety, she said, calling them “smiling tigers”.

When Li took her son to search for a pre-school in the neighborhood, agents went with them and warned the school against accepting her child due to the family being a “threat to national security”, she said.

“When I got angry with them, they told me that I needed to behave and wait quietly at home for my husband – then my child could go to school,” she said.

Her son has still not found a pre-school place, she said.

Placing high-profile dissidents under house arrest is nothing new in China; it was even used for former head of the ruling Communist Party Zhao Ziyang after he was sacked in 1989 for showing sympathy towards the pro-democracy Tiananmen movement.

But under Xi, increasingly brazen measures have been used to silence individuals who are not formally charged in an attempt to avoid international scrutiny, according to William Nee, Hong Kong-based China researcher at Amnesty International.

“They want a degree of plausible deniability,” he said. “If they were to criminally detain Li Wenzu, they would eventually have to justify it in law.”

Liu Xia has been under supervision at home almost constantly since her husband won the Nobel prize in 2010. She is still only allowed to speak to her friends in infrequent pre-arranged phone calls and visits, they say.

Another common target for house arrest are rights activists who are formally charged but then released after they give what rights groups allege are coerced “confessions”, either to Chinese state media or during trial.

While many avoid jail time, they remain under a form of detention that Jerome Cohen, an expert on Chinese law at New York University, has dubbed “non-release ‘release'”.

Such methods, Cohen wrote in a recent blog post, go beyond simple house arrest to include an array of “informal, unauthorized and suffocating” restrictions.

Wang Yu, a prominent rights lawyer who was arrested in 2015 during the same crackdown that saw Li’s husband detained, was still under effective house arrest in late 2017, despite her release from detention in late 2016, a friend told Reuters.

Restrictions on Wang have relaxed somewhat in recent months, but she is still closely monitored by authorities, the friend said.

“She told me not to come to her home, because there were people there with her all day keeping watch, just following her around, not subtly at all,” the friend said, requesting anonymity due to the sensitivity of the case.