(Reuters) – A JetBlue Airways passenger plane skidded off an icy taxiway after landing at Boston’s Logan International Airport on Monday night but no injuries were reported, the airline said.

The mishap involving an AirBus A320 occurred around 7:15 p.m. as Flight 50 from Savannah, Georgia touched down in Boston, where nearly three inches of snow had fallen earlier in the day, the airline said.

“No injuries have been reported at this time,” the airline said in a statement. “Buses transported customers from the aircraft to the terminal.” 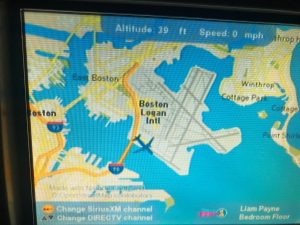 A JetBlue plane is seen on the in-flight map on the plane, at the Boston’s Logan International Airport in Boston, Massachusetts, U.S., December 25, 2017 in this picture obtained from social media. Courtesy of Yuval Gonczarowski/via REUTERS

Earlier on Monday departures and arrivals were halted at Logan International for about an hour as snow reduced visibility to near zero, airport officials said.

(Reporting by Keith Coffman in Denver; Editing by Robin Pomeroy)