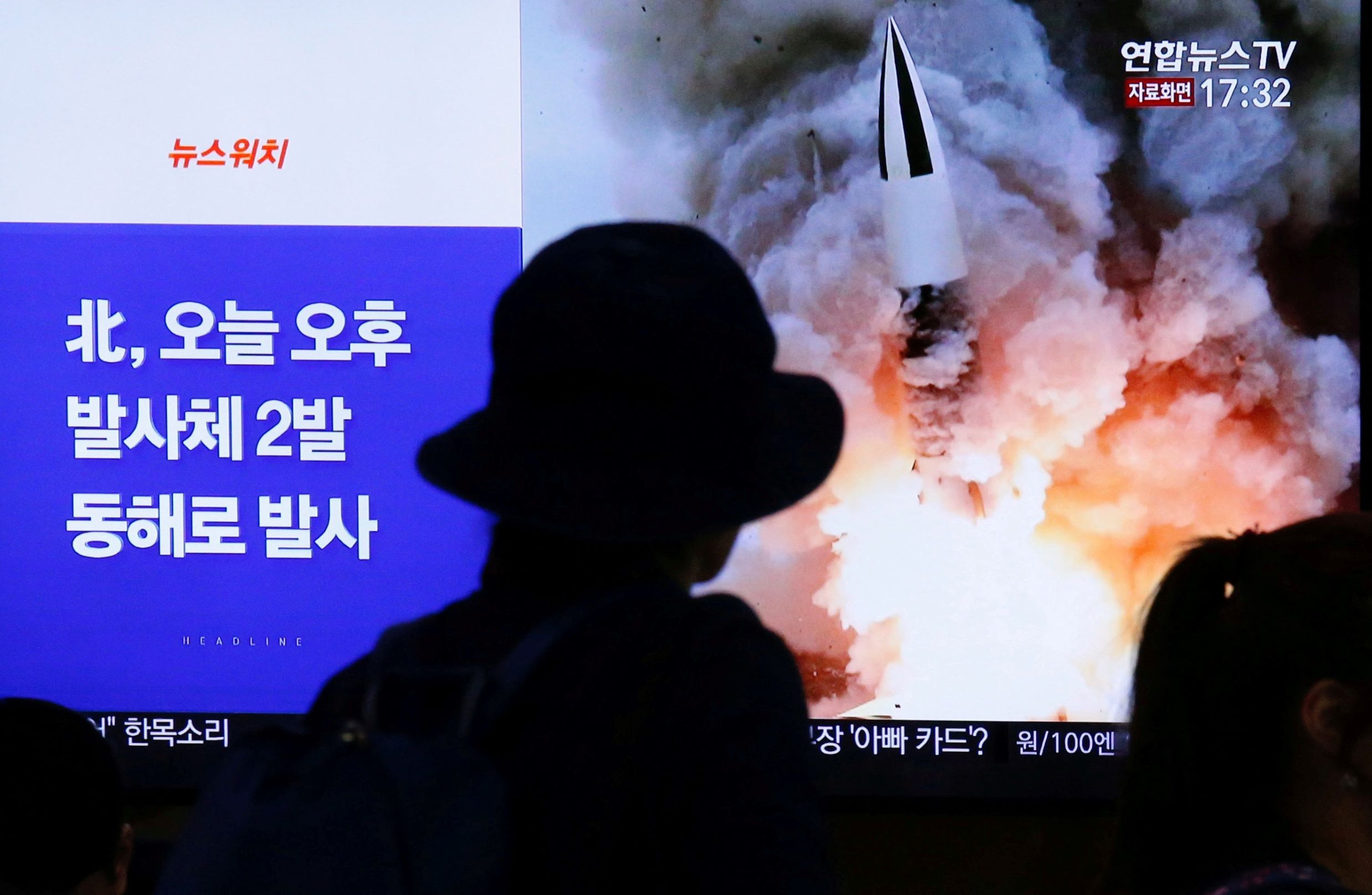 SEOUL (Reuters) – North Korea fired two suspected missiles into the sea between the Korean peninsula and Japan on Thursday, according to military officials in Japan and South Korea, ending nearly a month-long lull in testing after denuclearization talks stalled.

The launches, which Japanese authorities identified as likely ballistic missiles, were the first since one day of talks between the United States and North Korea ended without an agreement on Oct. 5 in Sweden.

American officials have played down previous missile launches this year, saying they were short-range weapons.

North Korean leader Kim Jong Un has set an end-of-the-year deadline for denuclearization talks with Washington, however, and in a statement on Sunday North Korea said it would be a mistake for the United States to ignore that deadline.

A U.S. State Department spokesman said: “We are aware of reports of a North Korean missile launch. We are continuing to monitor the situation and consulting closely with our allies in Japan and South Korea.”

Analysts said the launches underscore how tense the situation has become after three meetings between Kim and U.S. President Donald Trump – unprecedented top-level contact between the countries – failed to lead to any agreement over North Korea’s nuclear weapons and ballistic missile programs.

“Make no mistake, if there is no change in the current trajectory of U.S.-North Korea relations there is only one possible outcome: a long-range missile or nuclear weapons test by Pyongyang that will spark a crisis just like in 2017,” said Harry Kazianis, senior director of Korean Studies at the Center for the National Interest in Washington.

The first of two “unidentified projectiles” was fired on Thursday at 4:35 p.m. local time (0735 GMT) from South Phyongan Province, in the center of North Korea, South Korea’s Joint Chiefs of Staff (JCS) said in a series of statements. A second projectile was detected at 4:38 p.m. (0738 GMT).

The projectiles traveled an estimated 370 kilometers (230 miles) and reached an altitude of 90 km (56 miles), the JCS said, calling them “short range”.

“Objects that appeared to be ballistic missiles were launched from North Korea,” Japan’s defense ministry said in a statement. “They did not land within our territory.”

An American air base at Misawa, 1,130 km (700 miles) north of Tokyo, posted a “real world missile alert” and urged personnel to seek shelter, before later issuing an “all clear”.

The afternoon launch timing was a departure from this year’s string of tests, which usually took place around dawn.

South Korea’s National Security Council held an emergency meeting after the launch on Thursday, and expressed its concern about what it called “short-range projectiles”.

“Our military is maintaining a readiness posture while tracking and monitoring related developments in preparation for another launch,” the JCS said in a statement after the launches on Thursday.

The JCS called on North Korea to stop the launches because they were “unhelpful” for reducing tensions on the peninsula.

Kim Dong-yup, a former navy officer who teaches at Seoul’s Kyungnam University, said the launches could be a so-called “running test fire” of a recently developed multiple-rocket system, with the aim of fine-tuning the system for full production.

The launches occurred on the day that South Korean President Moon Jae-in attended the funeral of his mother, who died on Tuesday.

In a message delivered via the border village of Panmunjom late on Wednesday, North Korean leader Kim had expressed “deep condolences” and “consolation” over Moon’s loss, Moon’s office said on Thursday.

Relations between the two Koreas have cooled since a flurry of personal meetings between Moon and Kim last year, and denuclearization negotiations between North Korea and the United States appear stalled.

On Sunday, North Korea said there had been no progress in North Korea-United States relations.

North Korea has tested several new missile designs this year, including a new submarine-launched ballistic missile fired from a platform in the sea on Oct. 2.

It says the missiles are necessary to defend against new warplanes and weapons acquired by South Korea, including the advanced F-35 stealth fighter jet.

On Monday, South Korea began its annual Hoguk military exercises, which it says are for self defense.

North Korean state media, however, strongly criticized the drill as practice for invading the North, and said “South Korean military warmongers are driving the situation into an extreme one.”

Experts have said several of the new missiles tested this year by North Korea are designed to potentially evade missile defense systems deployed in South Korea and Japan.