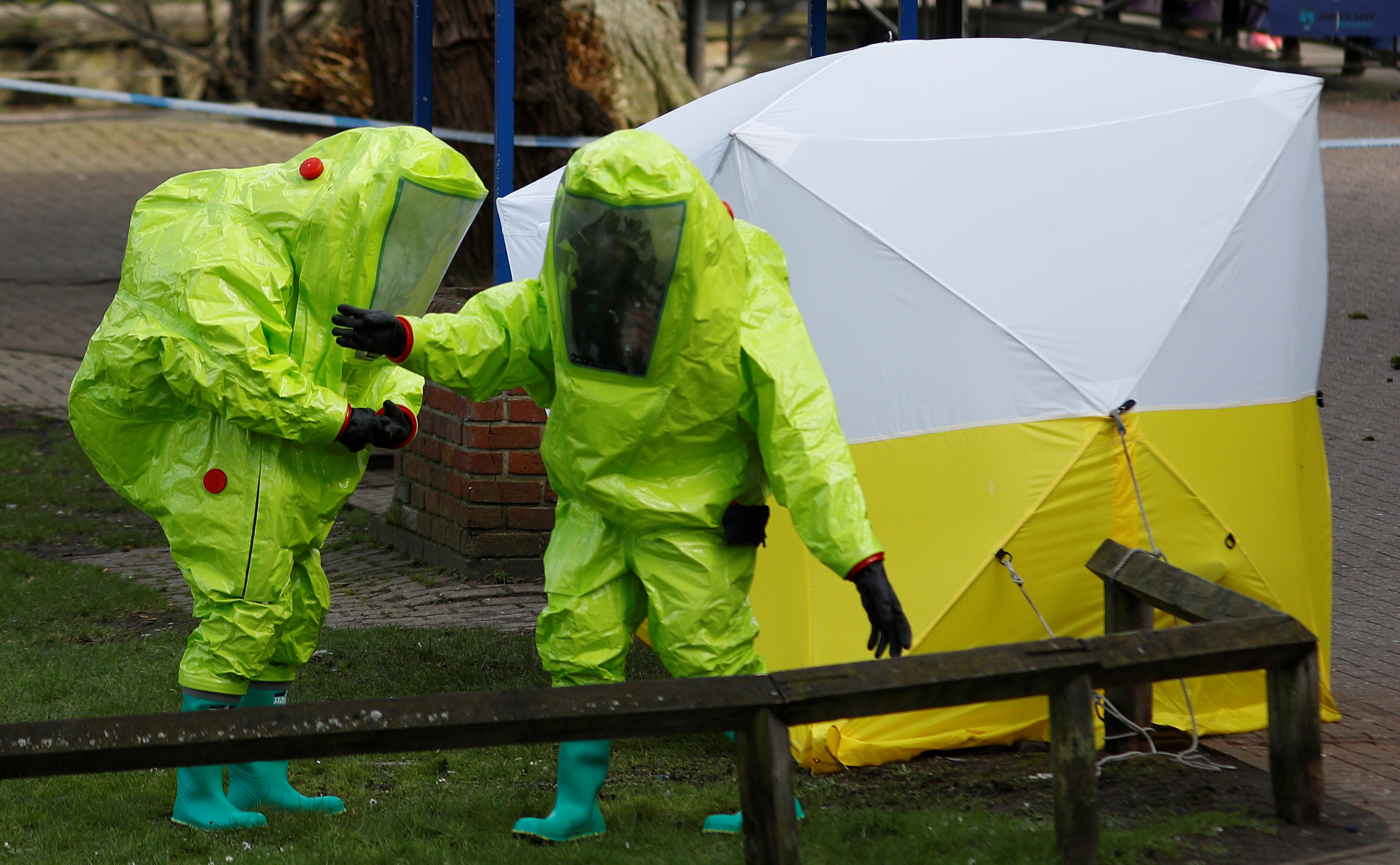 By Guy Faulconbridge and Michael Holden

LONDON (Reuters) – Britain gave President Vladimir Putin until midnight on Tuesday to explain how a nerve agent developed by the Soviet Union was used to strike down a former Russian double agent who passed secrets to British intelligence.

Sergei Skripal, 66, and his daughter Yulia, 33, have been in hospital in a critical condition since March 4 when they were found unconscious on a bench outside a shopping center in the English cathedral city of Salisbury.

Prime Minister Theresa May said it was “highly likely” that Russia was to blame after Britain identified the substance as part of the highly-lethal Novichok group of nerve agents developed by the Soviet military in the 1970s and 1980s.

“Either this was a direct act by the Russian state against our country,” May told parliament on Monday. “Or the Russian government lost control of this potentially catastrophically damaging nerve agent and allowed it to get into the hands of others.”

Russia holds a presidential election on March 18 in which Putin, himself a former KGB spy, is expected to coast easily to a fourth term in the Kremlin. It has denied any role in the poisoning and says Britain is whipping up anti-Russian hysteria.

Russian ambassador Alexander Yakovenko, summoned to the Foreign Office, was given until the end of Tuesday to explain what happened or face what May said were “much more extensive” measures against the $1.5 trillion Russian economy.

If no satisfactory Russian response is received by midnight London time then May will outline Britain’s response in parliament. She is due to hold a meeting of top security officials on Wednesday.

Foreign Secretary Boris Johnson said on Tuesday that the British response would be “commensurate but robust”.

“We’re giving Russia until midnight to explain how it came to be that Novichok was used on the streets of Wiltshire,” he said. “We cannot exclude that they have an explanation.”

Russia has requested access to the nerve agent used against Skripal but Britain has denied it access, Russian Foreign Minister Sergei Lavrov said. Britain’s Russian ambassador met Lavrov’s deputy in Moscow on Tuesday, a spokesman for the British embassy said.

Britain could call on allies for a coordinated Western response, freeze the assets of Russian business leaders and officials, expel diplomats, launch targeted cyber attacks and cut back participation in events such as the soccer World Cup.

Official figures show that Russia accounted for 4.7 billion pounds ($6.5 billion) of goods and services imported to Britain in 2016, less than 1 percent of its total. Exports were put at 5.3 billion pounds out of a British total of just under 550 billion pounds.

European allies including French President Emmanuel Macron expressed solidarity with Britain. U.S. President Donald Trump has not yet publicly commented, though Secretary of State Rex Tillerson said the United States had full confidence in the assessment that Russia was responsible.

The European Union pledged to stand by Britain, which is due to leave the bloc in just over a year’s time, though the bloc has struggled to maintain a common front on Russian sanctions.

Huge amounts of Russian money have poured into the British capital since the 1991 collapse of the Soviet Union, causing some to refer to it as “Londongrad”.

James Sherr, a Russia expert at the Chatham House think-tank, told Reuters Britain could hurt Putin and his allies by denying them access to the City of London’s financial services.

“They have milked and taken for granted its services as a hub for their global dealings and investments. They have been accustomed for a long time to regard this country as their playground and we have the means to change that,” he said.

“This regime in Russia is founded on a tight and unprincipled merger at all levels between power and money: if you attack the money, you are also attacking the regime’s power.”

The EU has travel restrictions and asset freezes against 150 people and 38 companies. EU nationals and companies are also banned from buying or selling new bonds or equity in some state-owned Russian banks and major Russian energy companies.

May said Russia had shown a pattern of aggression including the annexation of Crimea and the murder of former KGB agent Alexander Litvinenko, who died in 2006 after drinking green tea laced with radioactive polonium-210.

A public inquiry found the killing of Litvinenko had probably been approved by Putin and carried out by two Russians, one of them a former KGB bodyguard who became a member of the Russian parliament. Both denied responsibility, as did Moscow.

British Home Secretary Amber Rudd said police and the MI5 spy agency would look into allegations of Russian state involvement in 14 other deaths in Britain in recent years.

Skripal betrayed dozens of Russian agents to British intelligence before his arrest in Moscow in 2004. He was imprisoned in 2006 but in 2010 he was given refuge in Britain after being exchanged for Russian spies.

He had lived modestly in Salisbury since then and kept out of the spotlight until he was found unconscious on Sunday.

A British policeman who was one of the first to attend to the stricken spy was also affected by the nerve agent. He is now conscious in a serious but stable condition.