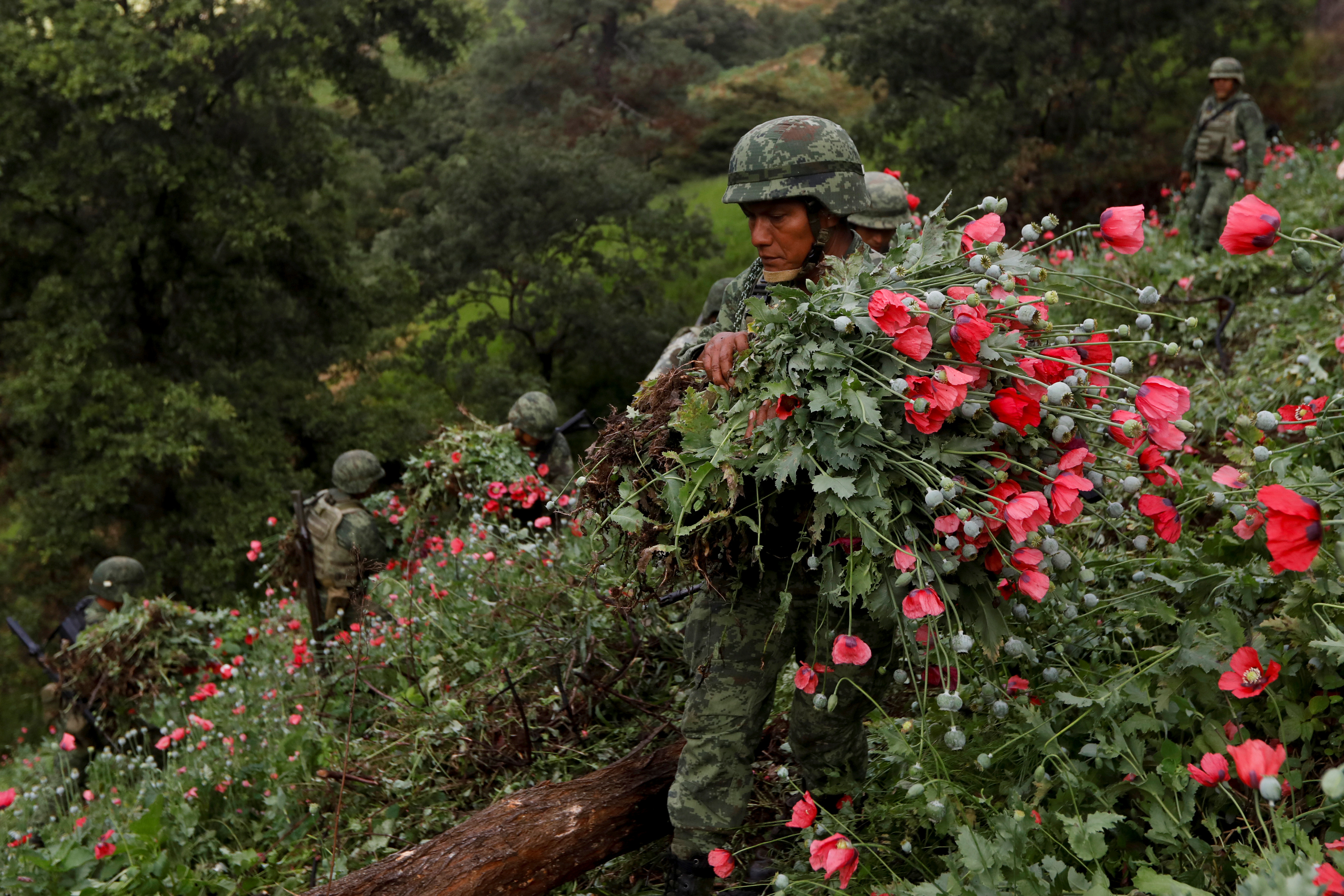 JUQUILA YUCUCANI (Reuters) – In the mountains of Mexico’s tropical Sierra, an ever-growing expanse of pink poppy flowers has pushed prices so low for opium paste, the gummy raw ingredient of heroin, that farmer Santiago Sanchez worries how he will feed and clothe his family.

The area of Mexico that illegally farms opium poppies grew by more than one-fifth last year, to an area the size of Philadelphia, according to a U.N.-backed study published in November. 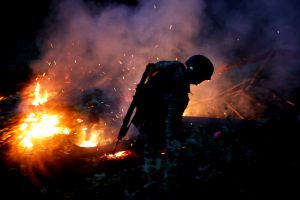 A soldier burns an illegal opium plantation near Pueblo Viejo in the Sierra Madre del Sur, in the southern state of Guerrero, Mexico, August 24, 2018. REUTERS/Carlos Jasso

That, along with a trend toward mixing synthetic opiate fentanyl in Mexico’s tarry black heroin, has slashed what criminal gangs pay farmers like Sanchez for a kilo of opium. Now, Sanchez earns about $260 per kilo, a fifth of the average price two years ago.

While Mexico’s top drug traffickers still make billions of dollars supplying U.S. addicts, at the bottom of the supply chain, the villagers are hardly surviving.

“We can’t keep living like this,” said Sanchez, who is a local leader in the remote Mixtec Indian village of Juquila Yucucani, where hundreds of poppy farmers have seen already meager incomes shrivel. “We can barely afford our food.”

In the United States, overdose deaths from opioids have increased almost six-fold in the past two decades, according to the Centers for Disease Control and Prevention. More than 15,000 people died of heroin overdoses in 2017 alone.

Heroin from Mexico accounted for 86 percent of the heroin found on U.S. streets, according to the Drug Enforcement Agency’s most recent annual narcotic report.

The heart of illegal poppy cultivation is in the hills of Guerrero state, in some of the poorest mountain districts – such as Juquila Yucucani, some 800 miles south of the U.S.-Mexican border. Guerrero is now among the country’s bloodiest states.&nbsp;

Despite unprecedented violence across the country, Mexican President Andres Manuel Lopez Obrador said last week that the government had “officially” ended its war against drug trafficking, a military-led offensive launched in 2006 that led to a surge in bloodshed as criminal groups splintered.

The government’s focus will now be on meeting the needs of marginalized communities, Lopez Obrador said, as part of a broader strategy to curb an illegal drug trade that is thriving despite the capture of high-profile kingpins like Joaquin ‘El Chapo’ Guzman, who is on trial in New York for drug trafficking that spanned more than two decades.

Lopez Obrador has not entirely turned his back on using soldiers to tackle violence stemming from drugs – he plans to create a new militarized National Guard police force. But he is also exploring a crop substitution program, relaxing prohibition and amnesties for low-level drug dealers and farmers.

On a visit to Guerrero in January, Lopez Obrador pledged price supports for grains, including around $300 a tonne for corn, part of a strategy meant to give farmers alternatives to planting illicit crops.

“Here, in the hills, we are going to pay a little more, so that corn is planted and people are compensated for their effort. So that other crops are not planted,” he said.

Lopez Obrador has backed a legislative bill to legalize marijuana, and along with the former head of Mexico’s military and other members of his team, he suggested last autumn that legalizing medical opium could be part of the solution.

The government appears to be backing away from that idea after opposition from the United States.

“WE ARE NOT TRAFFICKERS”

The farmers in Juquila Yucucani do not consider themselves criminals and say current poppy eradication efforts by the army also sometimes destroy legal crops.

“They have killed the food crops that my family use to eat,” said Lazaro Lopez, 65, who said the military should apologize. Although Reuters could not independently verify Lopez’s account, human rights groups have documented military abuses in parts of Guerrero. The army did not respond to requests for comment for this story.

For Sanchez, who said his village would embrace legalization, crop substitution is a poor alternative.

Other than poppies, few plants take to the thin soil on Juquila Yucucani’s stony slopes. Some land is apt for planting mango or avocado trees, Sanchez said, but they would take years to mature. The narrow ribbon of twisted dirt road connecting the village to the outside world would make it almost impossible to transport bulky or delicate crops to markets, he added.

Arturo Garcia, a farmers rights activist in the state, said the government’s new ideas would only work if a really sustained and well-funded effort were made to offer residents a way out of the drug trade.

“The state must throw all its weight into this region so that it begins to alleviate the conditions that have allowed violence,” he said.

For now, several hours journey from the nearest hospitals or schools, Juquila Yucucani’s poppy farmers say they have two choices to make a living: sneak illegally into the United States, or grow poppies.

“We are not drug traffickers, we want a dignified life,&rdquo; said elderly Nieves Garcia, who has grown poppies since she was a child and speaks a variant of the indigenous Mixtec language, but no Spanish. “My kids have left this place because there’s no way of getting ahead,” she said.&nbsp;&nbsp;&nbsp;