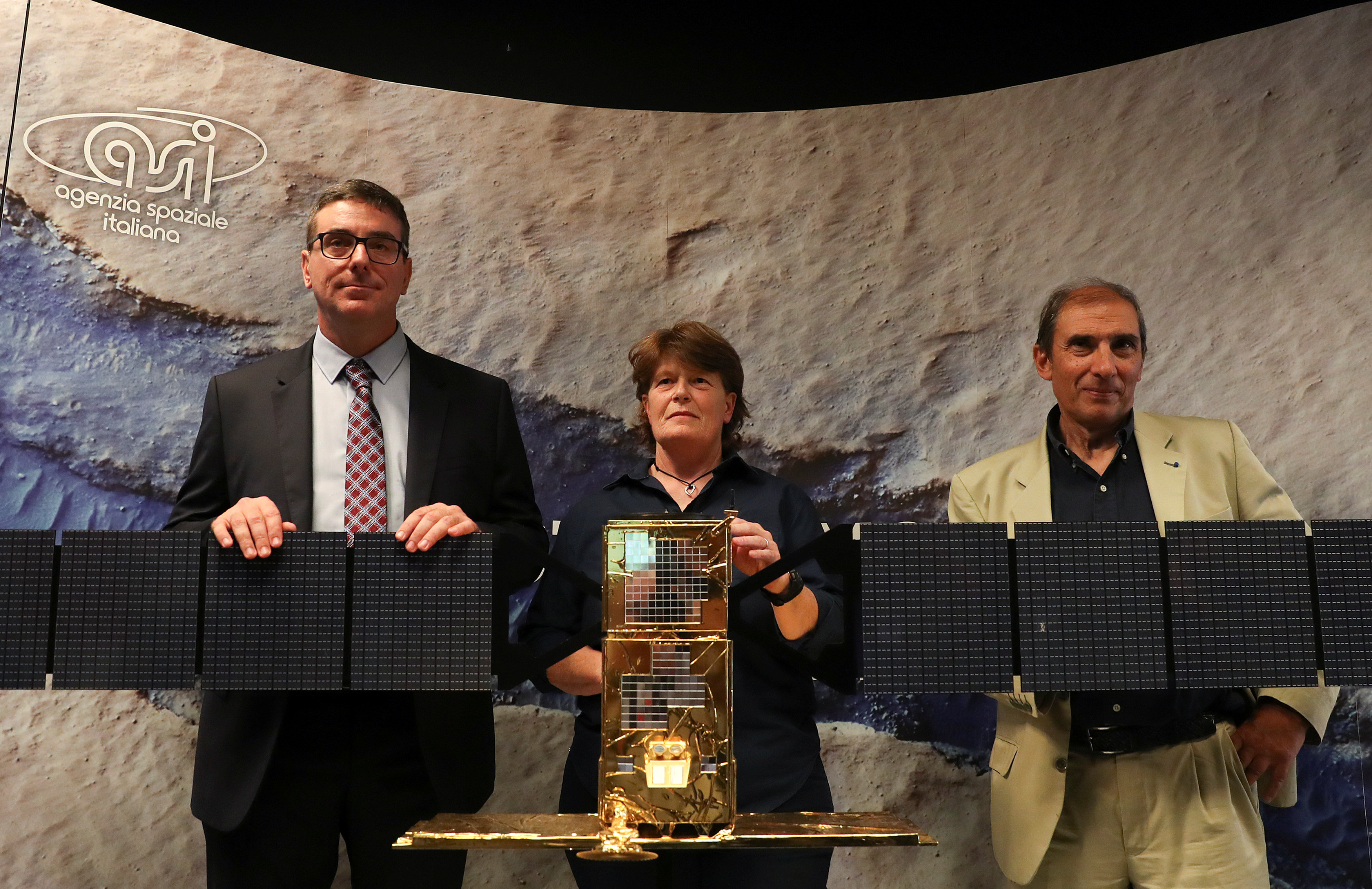 WASHINGTON (Reuters) – Using a radar instrument on an orbiting spacecraft, scientists have spotted what they said on Wednesday appears to be a sizable salt-laden lake under ice on the southern polar plain of Mars, a body of water they called a possible habitat for microbial life.

The reservoir they detected — roughly 12 miles (20 km) in diameter, shaped like a rounded triangle and located about a mile (1.5 km) beneath the ice surface — represents the first stable body of liquid water ever found on Mars.

Whether anywhere other than Earth has harbored life is one of the supreme questions in science, and the new findings offer tantalizing evidence, though no proof. Water is considered a fundamental ingredient for life.

The researchers said it could take years to verify whether something is actually living in this body of water that resembles a subglacial lake on Earth, perhaps with a future mission drilling through the ice to sample the water below.

“This is the place on Mars where you have something that most resembles a habitat, a place where life could subsist,” said planetary scientist Roberto Orosei of Istituto Nazionale di Astrofisica in Italy, who led the research published in the journal Science. 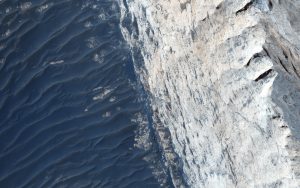 A view of Ophir Chasma on the northern portion of the vast Mars canyon system, Vallles Marineris, taken by NASA’s Mars Reconnaissance Orbiter.
REUTERS/NASA/JPL/University of Arizona

“This kind of environment is not exactly your ideal vacation, or a place where fish would swim,” Orosei added. “But there are terrestrial organisms that can survive and thrive, in fact, in similar environments. There are microorganisms on Earth that are capable of surviving even in ice.”

The detection was made using data collected between May 2012 and December 2015 by an instrument aboard the European Space Agency’s Mars Express spacecraft that transmits radar pulses, which penetrate the Martian surface and ice caps.

“This took us long years of data analysis and struggles to find a good method to be sure that what we were observing was unambiguously liquid water,” said study co-author Enrico Flamini, chief scientist at the Italian Space Agency during the research.

Mars long ago was warmer and wetter, possessing significant bodies of water, as evidenced by dry lake beds and river valleys on its surface. There had been some signs of liquid water currently on Mars, including disputed evidence of water activity on Martian slopes, but not stable bodies of water.

It remains to be seen if more subsurface reservoirs of water will be found or whether the newly discovered one is some sort of quirk, Orosei said.

If others are detected and a network of subglacial lakes exists like on Earth, he said, that could indicate liquid water has persisted for millions of years or even dating back to 3-1/2 billion years ago when Mars was a more hospitable planet.

The question would be, Orosei added, whether any life forms that could have evolved long ago on Mars have found a way to survive until now.

“Nobody dares to propose that there could be any more complex life form,” Orosei said. 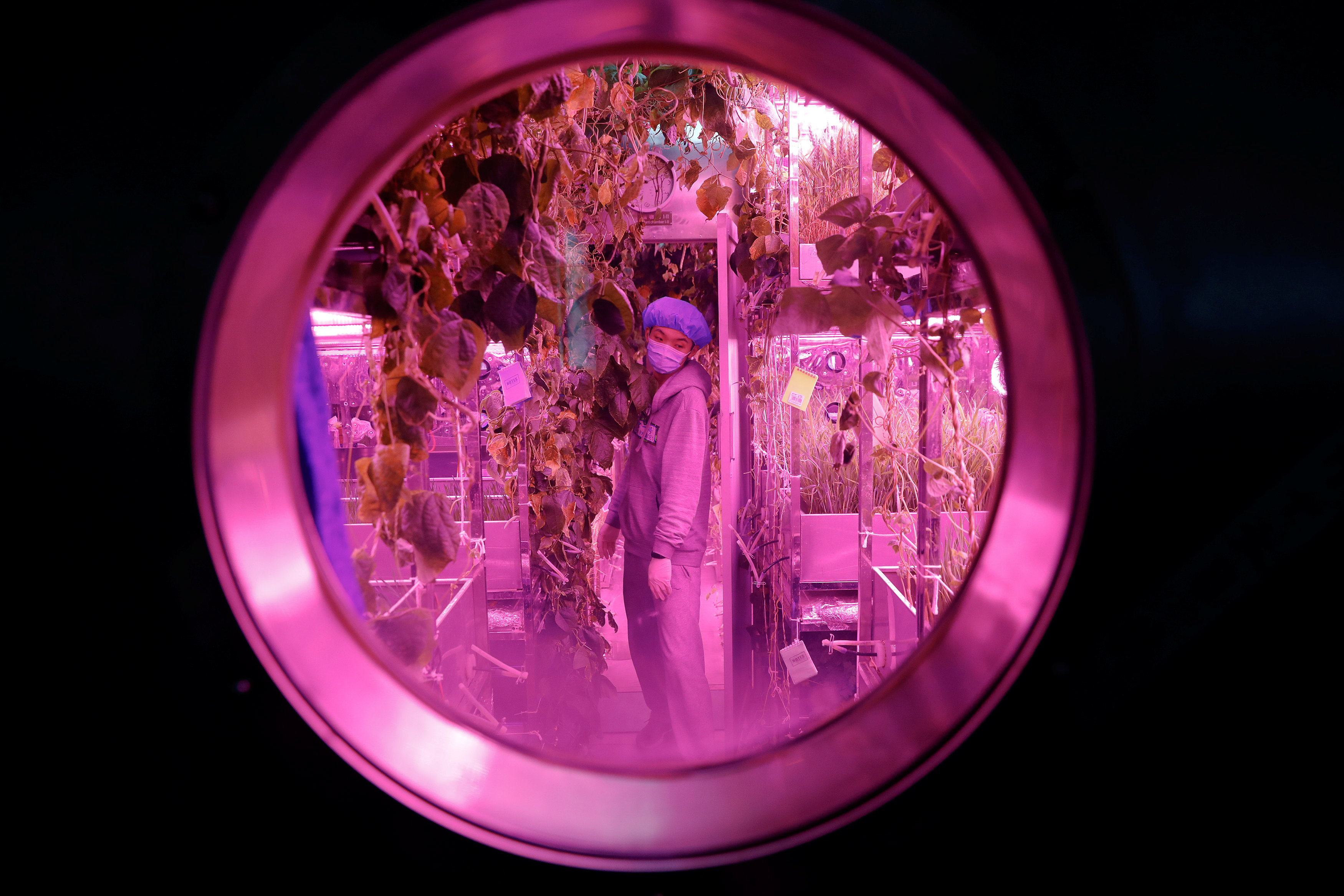 BEIJING (Reuters) – Sealed behind the steel doors of two bunkers in a Beijing suburb, university students are trying to find out how it feels to live in a space station on another planet, recycling everything from plant cuttings to urine.

They are part of a project aimed at creating a self-sustaining ecosystem that provides everything humans need to survive.

Four students from Beijing University of Aeronautics and Astronautics entered the Lunar Palace-1 on Sunday with the aim of living self-sufficiently for 200 days. 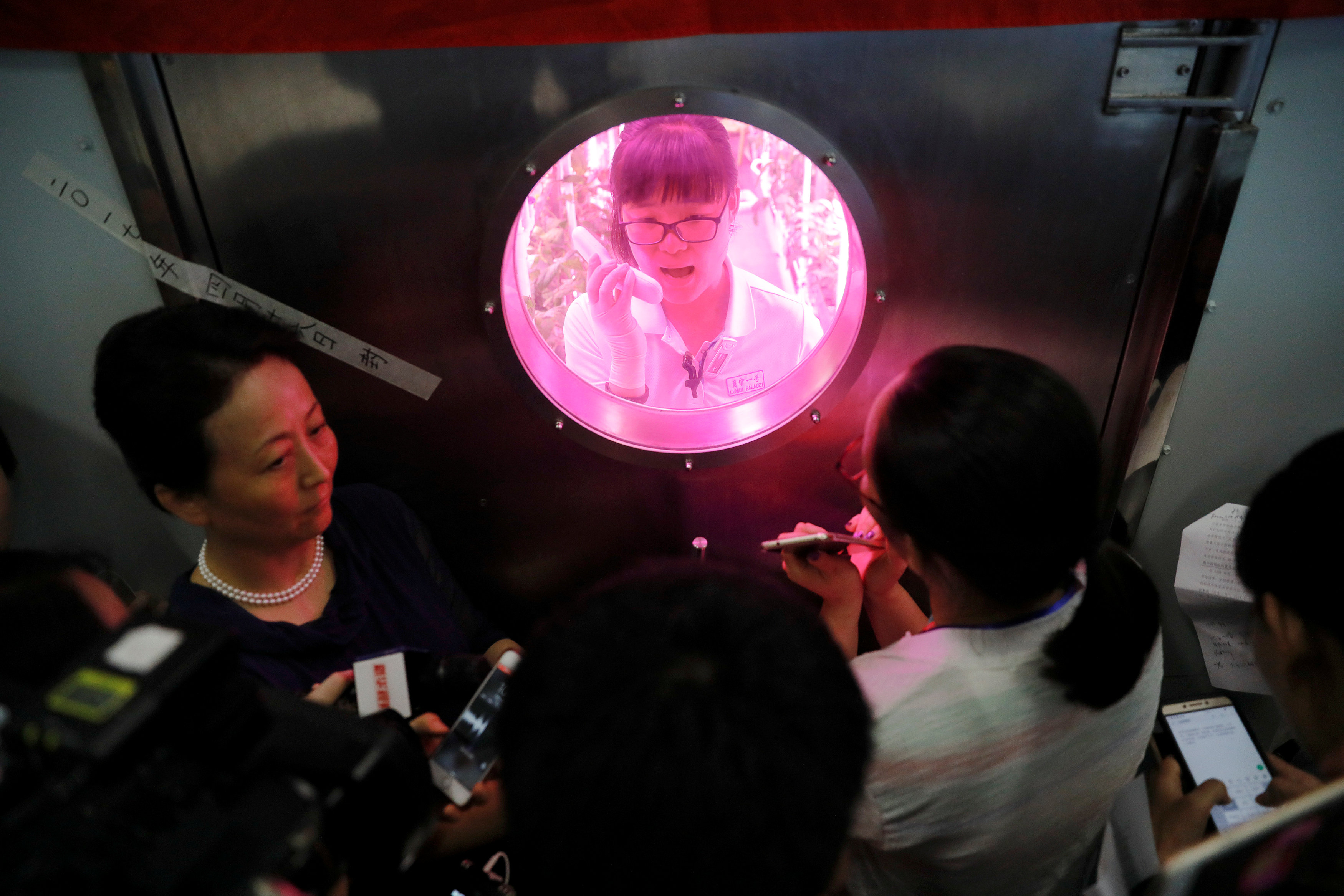 A volunteer answers reporters’ questions from inside a simulated space cabin in which she temporarily lives with others as a part of the scientistic Lunar Palace 365 Project, at Beihang University in Beijing, China July 9, 2017. REUTERS/Damir Sagolj

They say they are happy to act as human guinea-pigs if it means getting closer to their dream of becoming astronauts.

“I’ll get so much out of this,” Liu Guanghui, a PhD student, who entered the bunker on Sunday, said. “It’s truly a different life experience.”

President Xi Jinping wants China to become a global power in space exploration, with plans to send the first probe to the dark side of the moon by 2018 and to put astronauts on the moon by 2036. The Lunar Palace 365 experiment may allow them to stay there for extended periods.

For Liu Hong, a professor at Beijing University of Aeronautics and Astronautics and the project’s principal architect, said everything needed for human survival had been carefully calculated.

“We’ve designed it so the oxygen (produced by plants at the station) is exactly enough to satisfy the humans, the animals, and the organisms that break down the waste materials,” she said.

But satisfying physical needs is only one part of the experiment, Liu said. Charting the mental impact of confinement in a small space for such a long time is equally crucial.

“They can become a bit depressed,” Liu said. “If you spend a long time in this type of environment it can create some psychological problems.” 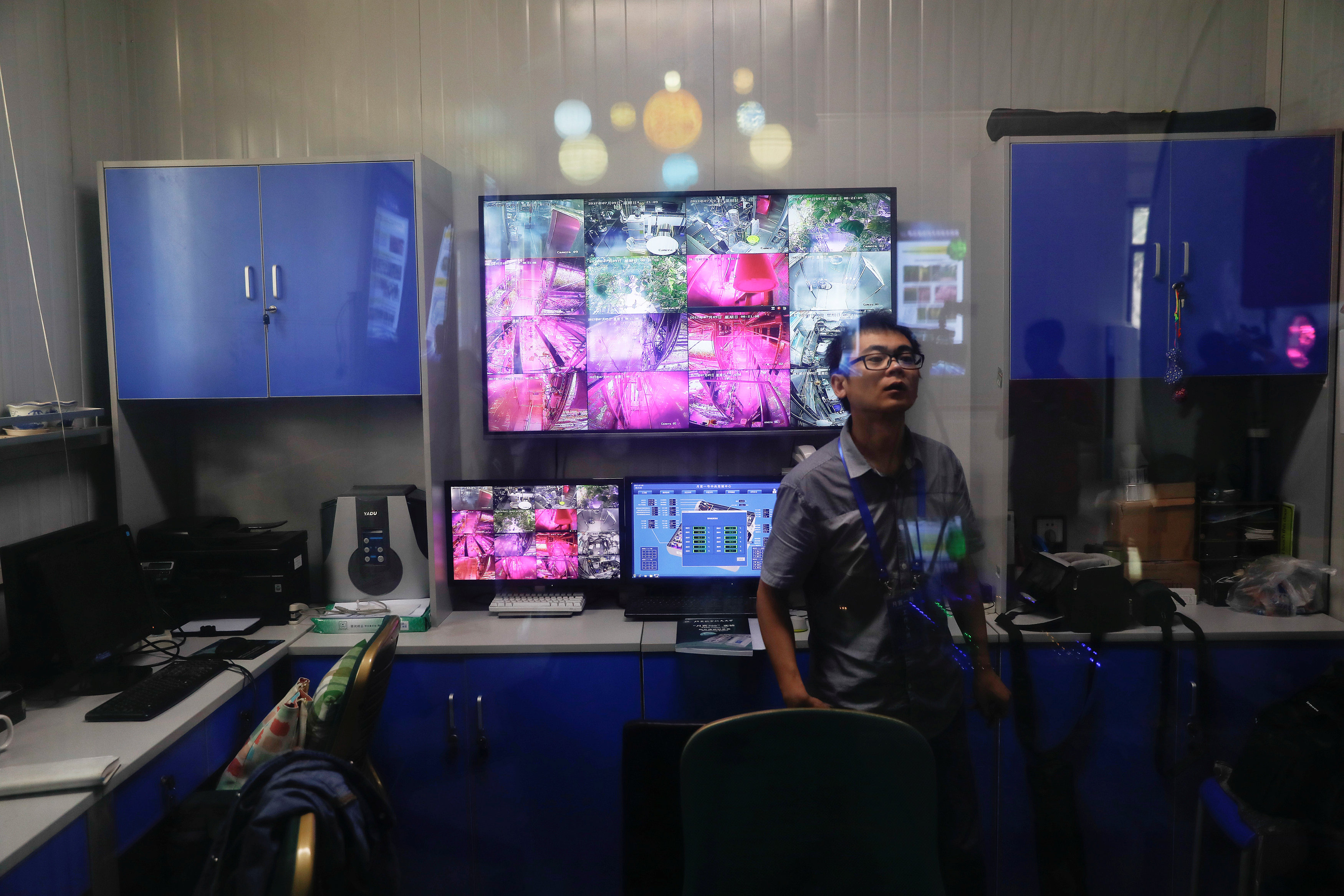 A member of staff is seen in front of screens showing inside of a simulated space cabin in which volunteers temporarily live as a part of the scientistic Lunar Palace 365 Project, at Beihang University in Beijing, China July 9, 2017. REUTERS/Damir Sagolj

Liu Hui, a student leader who participated an initial 60-day experiment at Lunar Palace-1 that finished on Sunday, said that she sometimes “felt a bit low” after a day’s work.

The project’s support team has found mapping out a specific set of daily tasks for the students is one way that helps them to remain happy.

But the 200-day group will also be tested to see how they react to living a for period of time without sunlight. The project’s team declined to elaborate.

“We did this experiment with animals… so we want to see how much impact it will have on people,” Liu, the professor, said.