WASHINGTON (Reuters) – The National Transportation Safety Board said on Thursday that “design errors” were found in a pedestrian bridge that collapsed in March at Florida International University, killing six people and injuring eight.

The board’s investigation update said there were errors in the design of part of the 174-foot Miami span, and that resulted in an overestimation of the capacity of a critical section. The NTSB said concrete and steel specimens tested met the project’s build plans’ minimum requirements.

A crack in the bridge that was observed prior to the collapse and previously disclosed was “consistent with those errors,” the board said.

The 950-ton, $14.2 million bridge, which crossed an eight-lane highway adjacent to Florida International University (FIU) in Miami-Dade County and linked the campus to the city of Sweetwater, collapsed five days after it was installed.

In March, FIU said that engineers and state and university officials had met hours before the new bridge collapsed, but concluded a crack in the structure was not a safety concern.

In August, the NTSB released photos of larger cracks from before the collapse that had been previously known.

The NTSB said Thursday it had not made any conclusions about the probable cause of the collapse and that the “investigation continues to examine the design, review, and construction processes as well as the actions taken once the cracking was observed.”

A spokesman for Florida Senator Bill Nelson said Thursday’s findings did not address the question of “whether there was proper oversight by regulators in the design and construction of the bridge.”

FIU and the Florida Department of Transportation did not immediately respond to requests for comment.

The Miami Herald reported last month that FIU had not decided whether to rebuild the bridge.

The assessment of design errors was made by the Federal Highway Administration, the NTSB said. 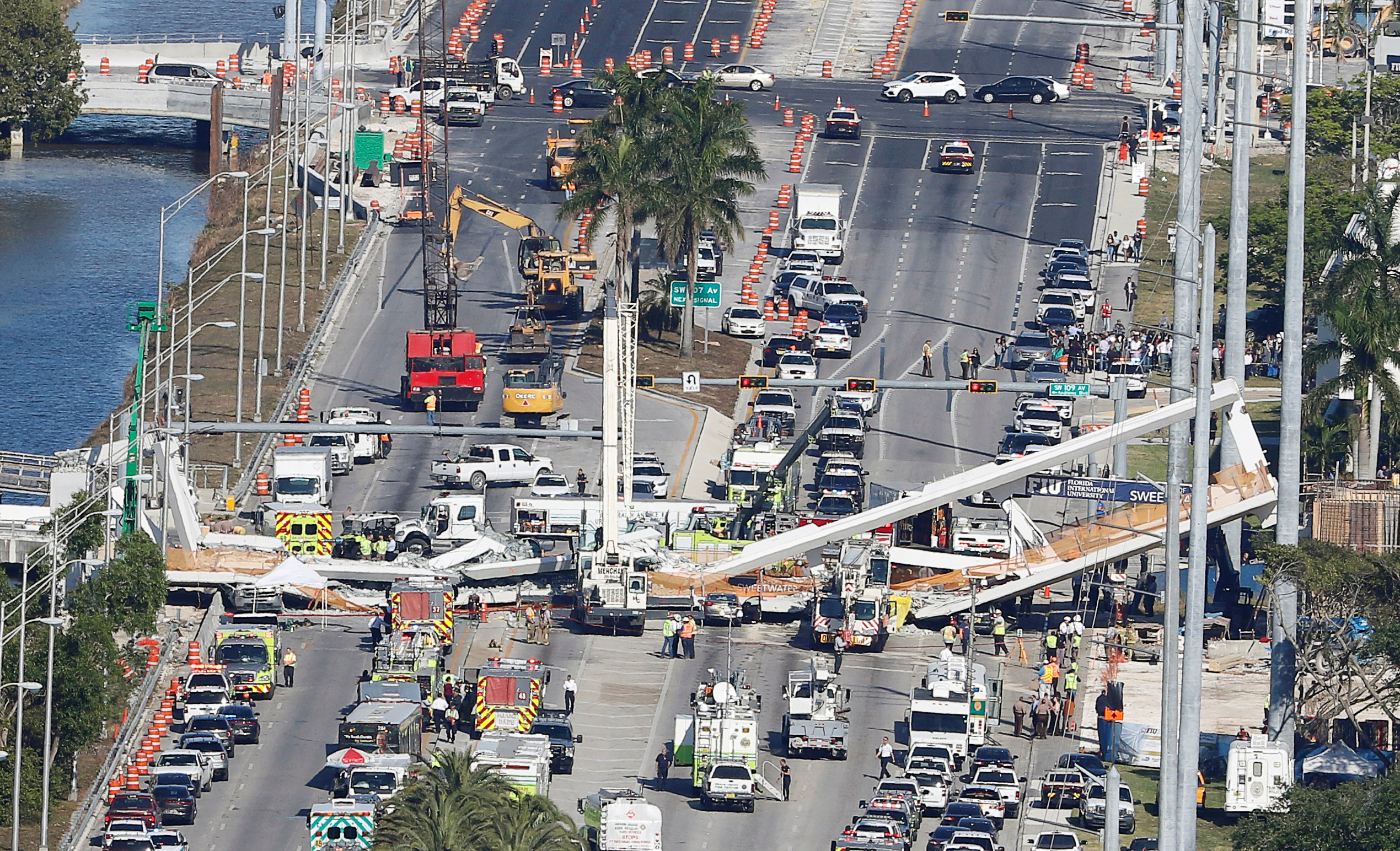 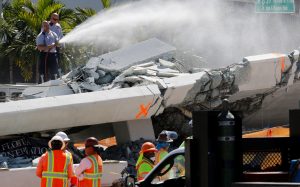 MIAMI (Reuters) – Rescue workers combed through the rubble of a pedestrian bridge that collapsed onto several lanes of traffic at Florida International University in Miami, but hopes of finding more survivors were fading early on Friday, police said.

Six people were confirmed dead after the newly built 950-ton bridge crushed vehicles on one of the busiest roads in South Florida on Thursday. With at least eight vehicles buried and out of reach beneath the rubble, the death toll could rise, Juan Perez, the Miami-Dade Police Department director, said on Friday.

“There must be some others in the vehicles,” Perez told Miami’s NewsRadio 610 WIOD. “We know there’s bodies down there and we can’t get to them. It’s terrible.”

At least 10 people were taken to hospitals and two remained in critical condition, officials and local media reported.

Witnesses told local media the vehicles were stopped at a traffic light when the bridge collapsed on top of them at around 1:30 p.m. ET (1730 GMT).

At one point, police urged television helicopters to leave the area so that rescuers could hear any cries for help from those trapped beneath the collapsed structure, CBS Miami television said.

Uncertainty over the stability of remaining sections of the bridge hampered rescue efforts, officials said. 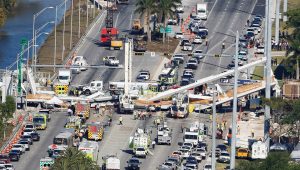 The 174-feet (53-meter) long bridge connects the university with the city of Sweetwater and was installed on Saturday in six hours over the eight-lane highway, according to a report posted on the university’s website.

“If anybody has done anything wrong, we will hold them accountable,” Florida Governor Rick Scott said at a news briefing late Thursday.

His office earlier issued a statement saying a company contracted to inspect the bridge was not pre-qualified by the state.

The bridge was intended to provide a walkway over the busy street where an 18-year-old female FIU student from San Diego was killed as she attempted to cross it in August, according to local media reports.

Students at FIU are currently on their spring break vacation, which runs from March 12 to March 17.

To keep the inevitable disruption of traffic associated with bridge construction to a minimum, the 174-foot portion of the bridge was built adjacent to Southwest 8th Street, using a method called Accelerated Bridge Construction. It was driven into its perpendicular position across the road by a rig in only six hours on Saturday, according to a statement released by the university.

The $14.2 million bridge was designed to withstand a Category 5 hurricane, the most dangerous measure by the National Hurricane Center, and built to last 100 years, the university said. (http://bit.ly/2tQ2ARg)

Officials with the National Transportation Safety Board were on the scene early on Friday to investigate why it collapsed.