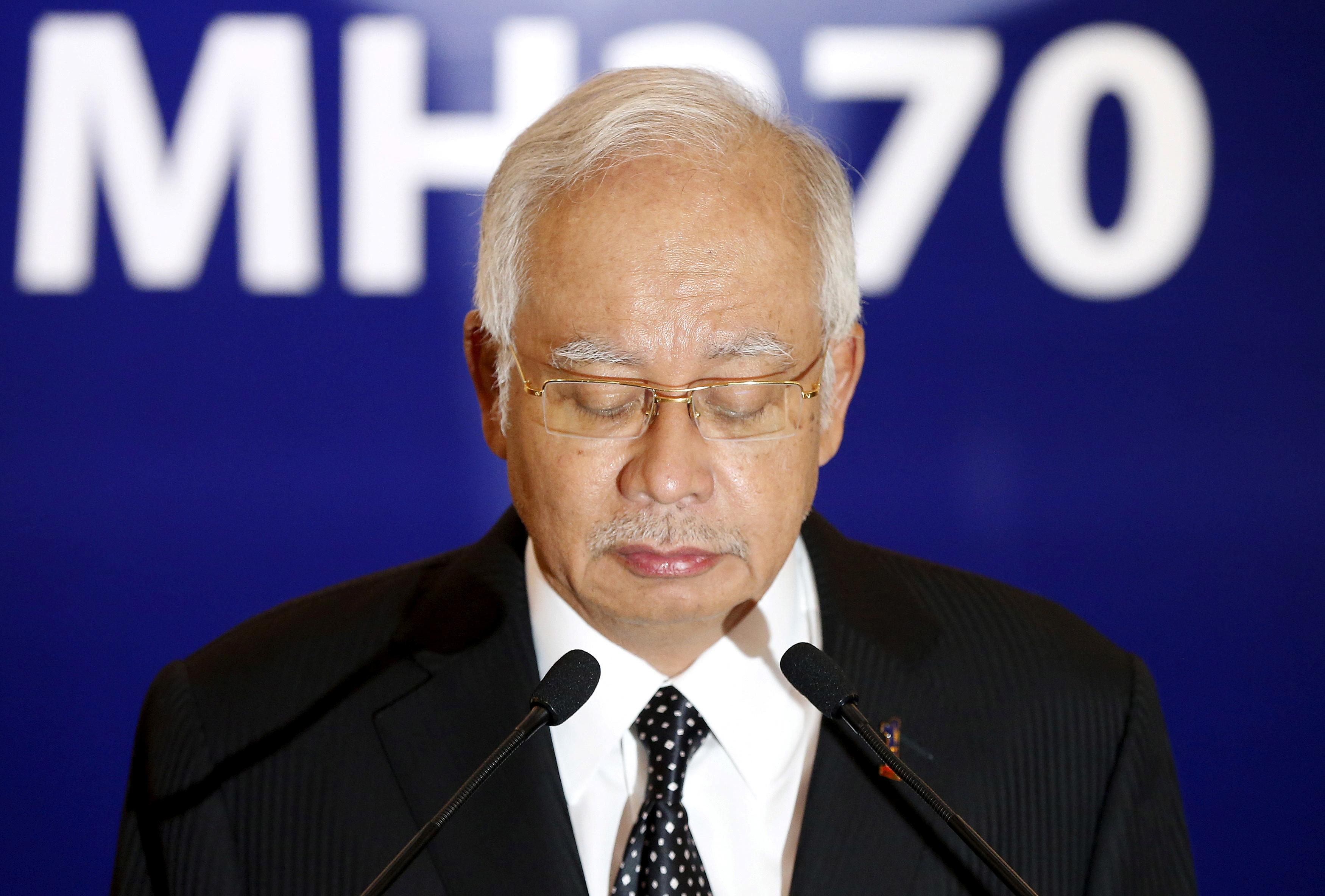 KUALA LUMPUR (Reuters) – Malaysia has never ruled out the possibility that missing Malaysia Airlines flight MH370 could have been downed by a suicidal pilot, the country’s former prime minister Najib Razak said on Wednesday.

Najib, who was premier when MH370 vanished with 239 people on board nearly six years ago, was responding to remarks by former Australian Prime Minister Tony Abbott that Malaysian leaders had considered from the outset that flight captain Zaharie Ahmad Shah may have committed mass murder.

“My very clear understanding from the very top levels of the Malaysian government is that from very, very early on here, they thought it was a murder-suicide by the pilot,” Abbott said in a clip from a Sky News documentary on the tragedy airing Wednesday.

Najib told online news portal Free Malaysia Today that Malaysian officials had considered such a scenario during their investigation but had chosen not to make their views public.

“It would have been deemed unfair and legally irresponsible since the black boxes and cockpit voice recorders had not been found and hence, there was no conclusive proof whether the pilot was solely or jointly responsible,” Najib was quoted as saying.

“Again I must stress that this possible scenario was never ruled out during the search effort and investigations, where no effort was spared.”

A spokesman for Najib confirmed his remarks.

Malaysia’s transport ministry declined to comment. Authorities had previously said there was nothing suspicious in the captain’s background, training or mental health, but did not rule out the possibility that the aircraft had been deliberately taken off course.

Najib said there were several reasons for authorities to suspect Zaharie’s involvement, including his ownership of a home flight simulator and findings showing that MH370’s transponders were switched off shortly after the plane left Malaysian airspace.

Flight MH370 became one of the world’s greatest aviation mysteries when it disappeared on its way from Kuala Lumpur to Beijing on March 8, 2014.

Malaysia, China, and Australia, called off a two-year, A$200 million ($130 million) underwater search in the southern Indian Ocean in January 2017 after finding no trace of the aircraft.

Najib lost a general election that month. He is now facing dozens of corruption charges over alleged involvement in a multibillion-dollar scandal at a state fund in which he has plead not guilty. 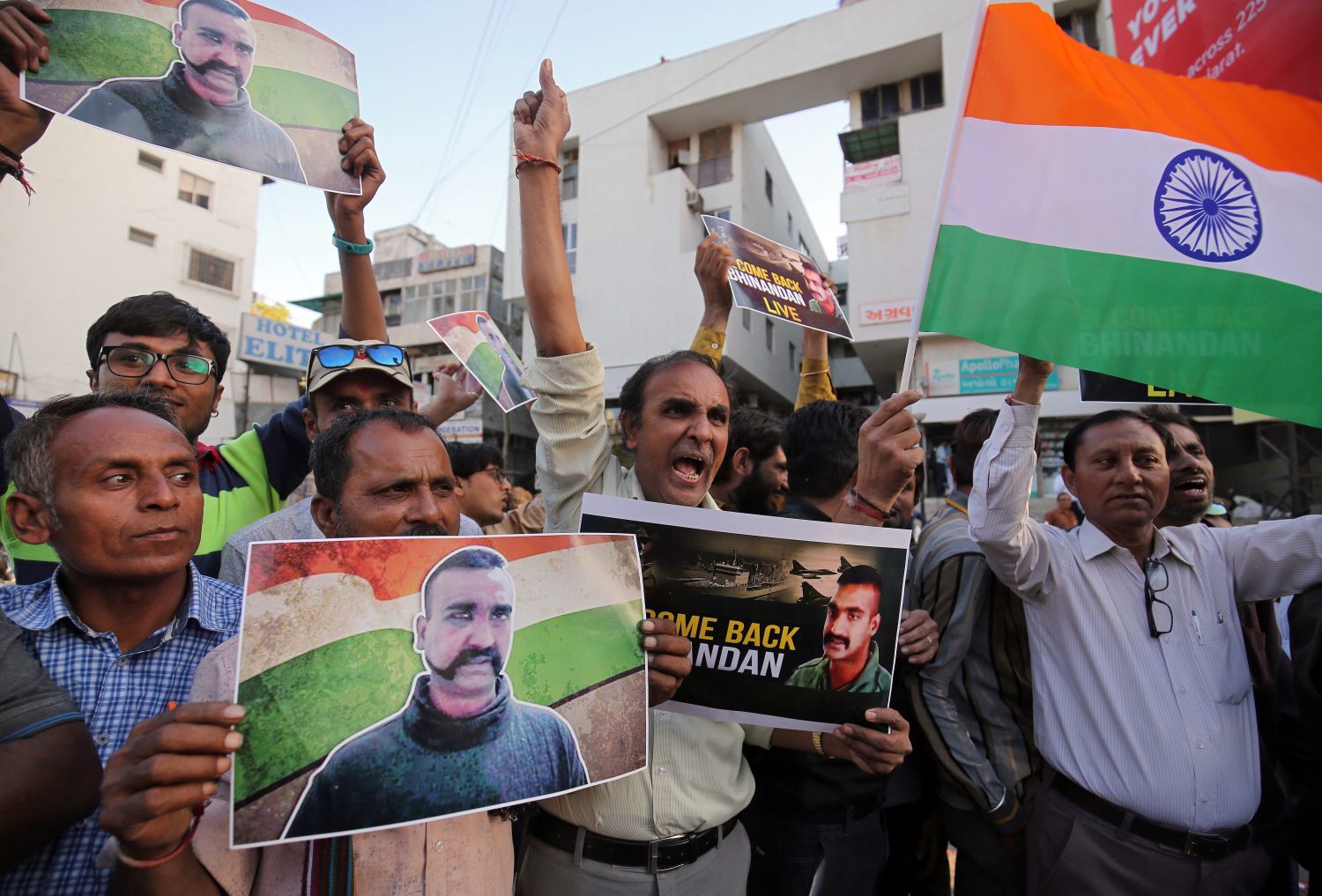 WAGAH, India/MUZAFFARABAD, Pakistan (Reuters) – Pakistan handed a captured Indian pilot back to his country on Friday as the nuclear-armed neighbors scaled back their confrontation, at least temporarily.

Television footage showed Wing Commander Abhinandan walking across the border near the town of Wagah just before 9.00 p.m. (1600 GMT). Indian officials confirmed he had been returned and said he would be taken for medical checks.

Abhinandan was shot down on Wednesday while flying a MiG-21 fighter jet that crashed in Pakistani territory after a dogfight with a Pakistani JF-17.

World powers have urged restraint from the two nations, as tensions escalated following a suicide car bombing that killed at least 40 Indian paramilitary police in Indian-controlled Kashmir on Feb. 14.

Pakistani Foreign Minister Shah Mahmood Qureshi said earlier on Friday the pilot would be released “as a gesture of peace and to de-escalate matters”.

Before the pilot was released, Pakistani television stations broadcast video of him, looking cleaned up, thanking the Pakistani army for treating him well.

“The Pakistani army is a very professional service,” he said.

Throughout the day, crowds on the Indian side thronged the road to the crossing, shouting nationalist slogans and waving Indian flags.

“Pakistan is releasing our pilot, I thank them for that,” said Kulwant Singh, who has run a food stall at the crossing for 20 years.

The disputed Himalayan region of Kashmir has been at the root of two of the three wars fought between India and Pakistan since they gained independence from Britain in 1947.

There was some firing along the contested border dividing Kashmir on Friday, according to a spokesman for India’s defense ministry, but the hostilities were well short of previous days.

Pakistan reopened some airports on Friday, after easing airspace restrictions that had disrupted flights between Asia and Europe for several days during the conflict.

Relations between the two countries, however, remain strained.

Qureshi said he would not attend a meeting of foreign ministers from the Organisation of Islamic Cooperation in Abu Dhabi this weekend, because his Indian counterpart had been invited to the event.

India also faces an ongoing battle against armed militants in its portion of Kashmir. On Friday, four security personnel and a civilian were killed in a gun battle with militants, officials said. (Reuters) – The pilot who safely landed a stricken Southwest Airlines flight on Tuesday got her first flying experience in the U.S. Navy, touching down F-18 fighter jets at 150 miles per hour on aircraft carriers.

Tammie Jo Shults, 56, may have drawn on her Navy skills when one of the two engines on her Boeing 737-700 blew and broke apart at 32,000 feet on Tuesday, forcing her to implement a rapid descent toward Philadelphia International Airport.

The explosion killed one passenger and nearly sucked another out of a shattered window.

One of the first female fighter pilots in the U.S. Navy, Shults calmly told air traffic control that part of her plane was missing, and she would need ambulances on the runway.

“So we have a part of the aircraft missing so we’re going to need to slow down a bit,” Shults told a controller.

Many of the 144 passengers sang her praise on social media after Shults thanked them for their bravery as they left the plane.

“The pilot Tammy Jo was so amazing! She landed us safely in Philly,” said Amanda Bourman on Instagram.

Passengers identified Shults as the pilot. Southwest Airlines declined to name the crew of flight 1380 and Shults was not immediately available for comment.

Authorities said the crew did what they were trained to do.

“They’re in the simulator and practice emergency descents..and losing an engine… They did the job that professional airline pilots are trained to do,” National Transportation Safety Board Chairman Robert Sumwalt told reporters.

Shults might never have become a pilot if she had not been so determined to fly from a young age.

She is quoted on fighter plane blog F-16.net saying she tried to attend an aviation career day at high school but was told they did not accept girls.

A native of New Mexico, she never lost the urge to fly and, after studying medicine in Kansas, applied to the Air Force. It would not let her take the test to become a pilot, but the U.S. Navy did.

She was one of the first female F-18 pilots and became an instructor before she left the Navy in 1993 and joined Southwest, according to the blog.

A Christian, who is married to a fellow pilot and has two children, Shults said that sitting in the captain’s chair gave her “the opportunity to witness for Christ on almost every flight.”

Bourman was among passengers who said they had been saved by divine intervention.

“God sent his angels to watch over us,” she said.