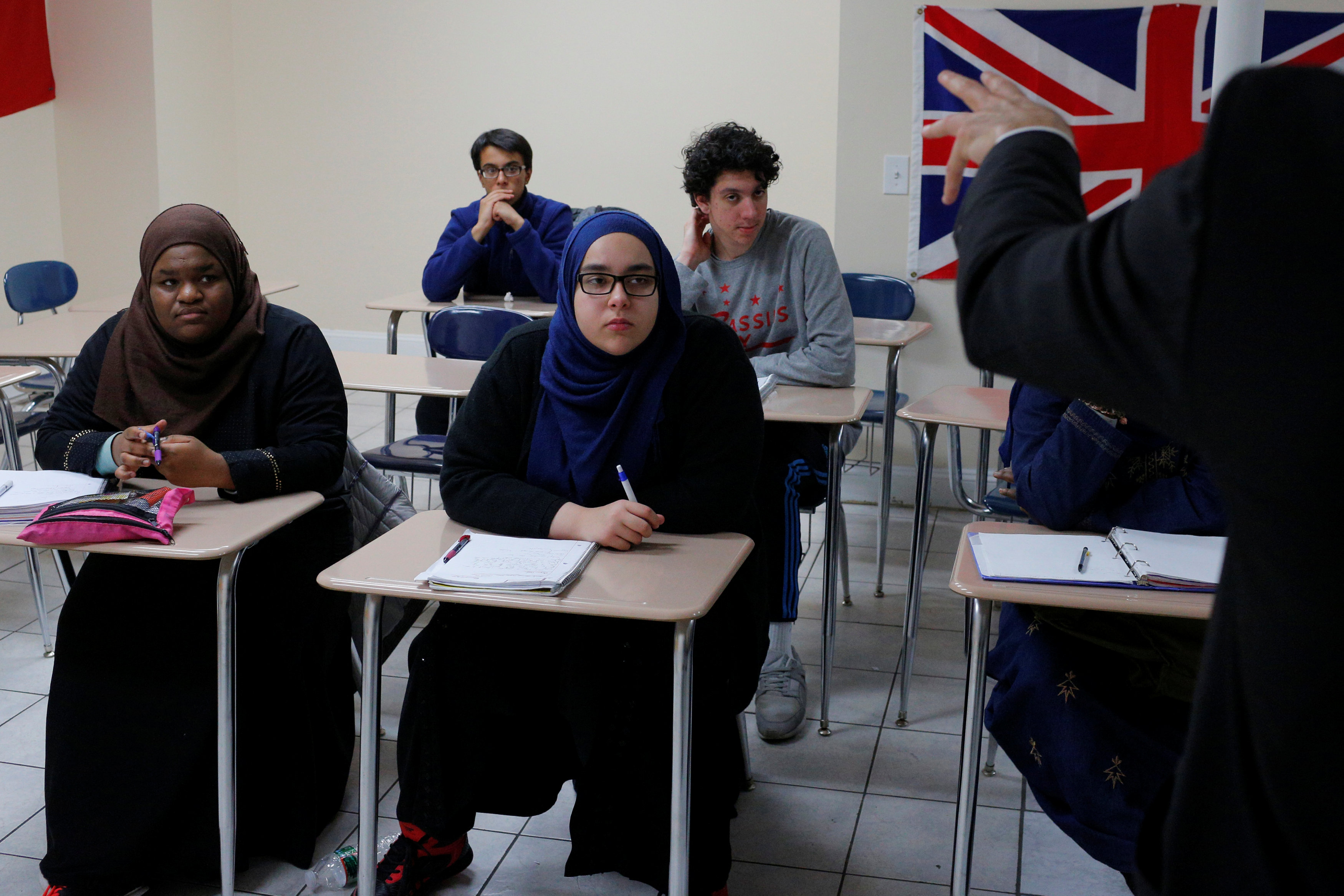 MANSFIELD, Mass. (Reuters) – The students at Al-Noor Academy, a Muslim school outside Boston, bombarded their government class speaker with questions: How do you start a political discussion? How do you use social media in politics? And how do you influence elected leaders?

The group of mostly 16-year-olds was too young to vote but seemed eager to find ways to counter the rhetoric of President Donald Trump who last week issued travel restrictions to the United States by citizens of seven Muslim-majority countries.

“Before this election happened, I really didn’t know much about politics at all,” said Sarah Sendian, a sophomore student at the school in Mansfield, Massachusetts. “With the new president and all of the things that are happening, it sparked a lot of interest in a lot of young people.”

The class is one of the first actions of newly formed Muslim political organization Jetpac – standing for Justice, Education, Technology, Policy Advocacy Center – to encourage political activism among the 3.3 million Muslims who make up about 1 percent of the U.S. population.

“This is the time when Muslims should step forward,” said Nadeem Mazen, the group’s founder and a city councilor in Cambridge, Massachusetts. “What’s going on at the national level only emphasizes what we’ve known prior to Trump being elected, and it’s that we need really good leaders.”

Thursday’s lesson at the 116-student junior and senior high school was heavy on how to build networks of like-minded people and turn them out at public meetings, rallies and elections to amplify the voices of U.S. Muslims.

About 824,000 of them were registered to vote as of 2016, a figure that had risen by about 60 percent over the past four years, according to national Muslim advocacy group the Council on American-Islamic Relations.

The class’s teacher, Joe Florencio, reminded his students that generations of immigrant populations have gone through the same process of becoming politically active.

“To be effective politically, you have to know what you’re doing,” said Florencio, the sole non-Muslim faculty member in a building that once housed the Roman Catholic church where his parents were married.

Students at the school, founded in 2000, study both standard U.S. academic subjects including science and math as well as Arabic and the Koran, a model similar to the many parochial schools in the northeastern United States.

Jetpac, which hopes to eventually offer versions of the class to private and public schools across the United States, faces an uphill climb. The number of anti-Muslim attacks reported to the FBI last year spiked to their highest level since 2001, the year that al Qaeda-backed hijackers destroyed New York’s World Trade Center.

While the group acknowledged that it will take time for political newcomers to win elections, even the act of campaigning could help Muslims, simply by making people more familiar with politics, said Faiza Patel, of the NYU School of Law’s Brennan Center for Justice.

“It allows them to meet lots of people, people that they might not otherwise meet and that has the effect of reducing prejudice,” said Patel, who studies interactions between Muslims and the U.S. justice system. “You start to see people as human beings.”

Almost half of respondents to a 2016 Pew Research Center poll said they believed that at least some U.S. Muslims harbored anti-American views, but respondents who knew a Muslim personally were less likely to believe that than ones who did not.

Yousef Abouallaban, a member of the Al-Noor school committee whose two eldest sons have attended the school, said he hoped the class would help the children of Muslim immigrants overcome a bias held by some of their parents against getting involved with politics.

“We were raised in a different culture where our belief is that people who get involved in government are corrupt people. At all levels. So if you are a decent person, you should never get involved in politics,” said Abouallaban, who immigrated from Syria in 1989. “That’s not the case in the United States and this mentality has to be changed.” 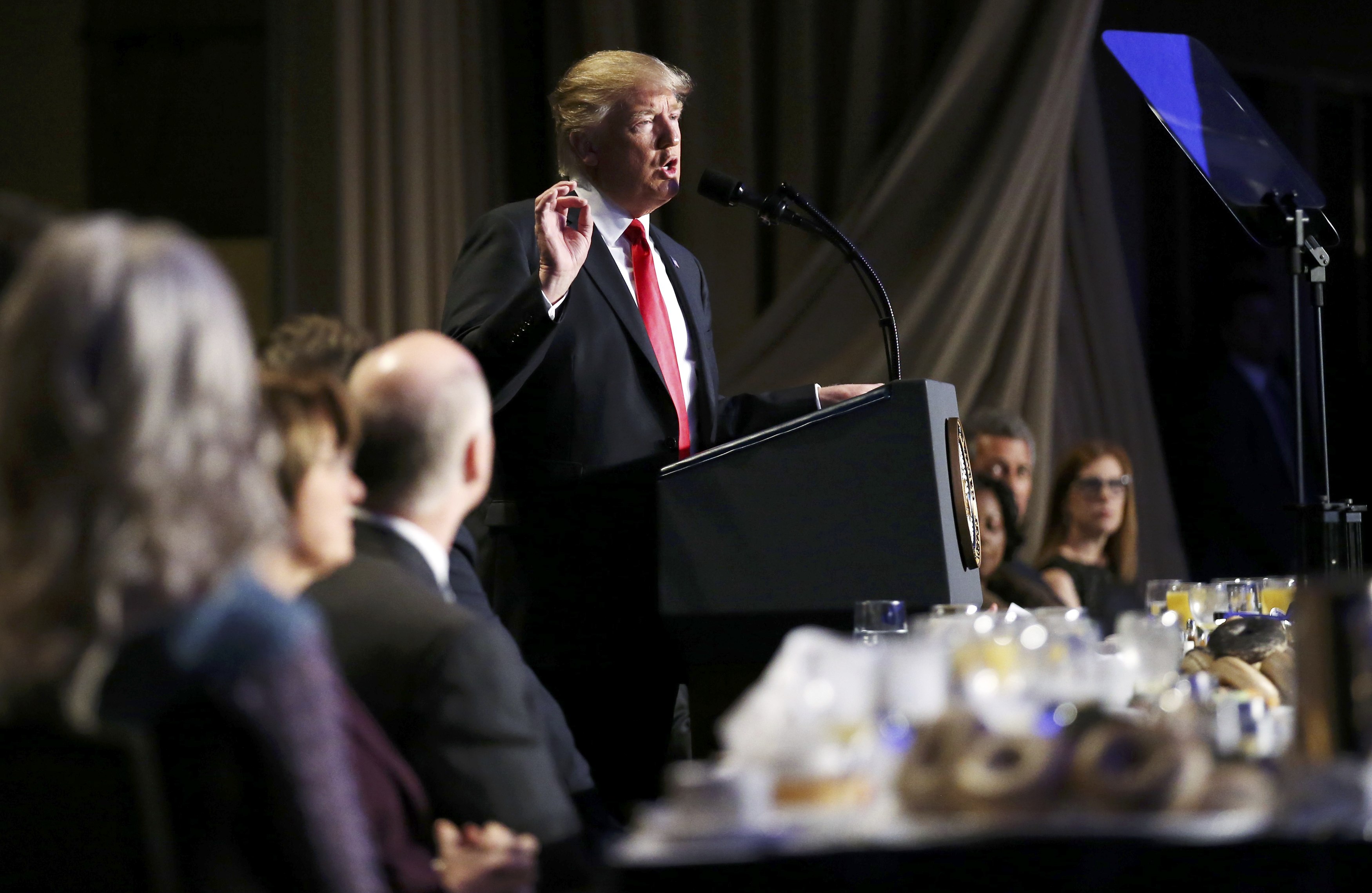 By Jeff Mason and Roberta Rampton

WASHINGTON (Reuters) – President Donald Trump, who is strongly backed by evangelical Christian voters, on Thursday promised to “totally destroy” a 1954 U.S. law barring churches and other religious institutions from political activity if they want to keep tax-exempt status.

Trump made his comments about a measure called the Johnson Amendment during remarks at the annual National Prayer Breakfast.

“I will get rid of and totally destroy the Johnson Amendment and allow our representatives of faith to speak freely and without fear of retribution. I will do that, remember,” Trump told an audience including politicians, religious leaders and guests such as Jordan’s King Abdullah.

The Johnson Amendment prohibits tax-exempt organizations such as churches, charities and educational institutions from directly or indirectly participating in any political campaign in favor or against a political candidate.

It is named after Democratic former President Lyndon Johnson and is an important statutory barrier between politics and religion.

Trump previously spoke out against the amendment during the campaign and won the support of evangelical Christian leaders including Liberty University President Jerry Falwell Jr.

A change in the law would require action in the Republican-led U.S. Congress. After Trump’s remarks, Republican House of Representatives Speaker Paul Ryan told reporters he has “always supported” eliminating the Johnson Amendment.

Critics including the group Americans United for Separation of Church and State expressed alarm.

“It would also lead some houses of worship to focus on supporting candidates in exchange for financial and other aid. That would be a disaster for both churches and politics in America,” Lynn said.

Scrapping the Johnson Amendment has been a goal of Christian conservatives, who contend it violates free speech and religious freedom rights. The U.S. Constitution’s First Amendment guarantees freedom of religion and bars the government from establishing an official religion.

During his remarks at an event that typically is a solemn affair, Trump also said virtually every other nation was taking advantage of the United States and derided actor and former politician Arnold Schwarzenegger over TV viewership ratings.

He said Schwarzenegger, the Republican former governor of California, had disastrous ratings for the NBC reality TV program “Celebrity Apprentice,” which Trump previously starred in.

“They hired a big, big movie star, Arnold Schwarzenegger, to take my place. And we know how that turned out,” Trump said.

“It’s been a total disaster. … And I want to just pray for Arnold if we can, for those ratings, OK?”

Schwarzenegger, who endorsed Ohio Governor John Kasich over Trump for the Republican presidential nomination, shot back, alluding to the controversies of Trump’s first two weeks in office.

“Hey Donald, I have a great idea,” Schwarzenegger said in a video. “Why don’t we switch jobs? You take over TV, because you’re such an expert in ratings, and I take over your job. And then people can finally sleep comfortably again.”

Trump defended his directive on Thursday as crucial to ensuring religious freedom and tolerance in America, and said he wanted to prevent a “beachhead of intolerance” from spreading in the United States. He also called terrorism a fundamental threat to religious freedom.

“The world is in trouble, but we’re going to straighten it out. OK? That’s what I do. I fix things,” Trump said.

“When you hear about the tough phone calls I’m having, don’t worry about it,” Trump added, apparently referring to telephone conversations including one with Australian Prime Minister Malcolm Turnbull.

“It’s time we’re going to be a little tough folks. We’re taking advantage of by every nation in the world virtually. It’s not going to happen anymore,” Trump said.

(Reporting by Jeff Mason and Roberta Rampton; Writing by Will Dunham; Editing by Alistair Bell)