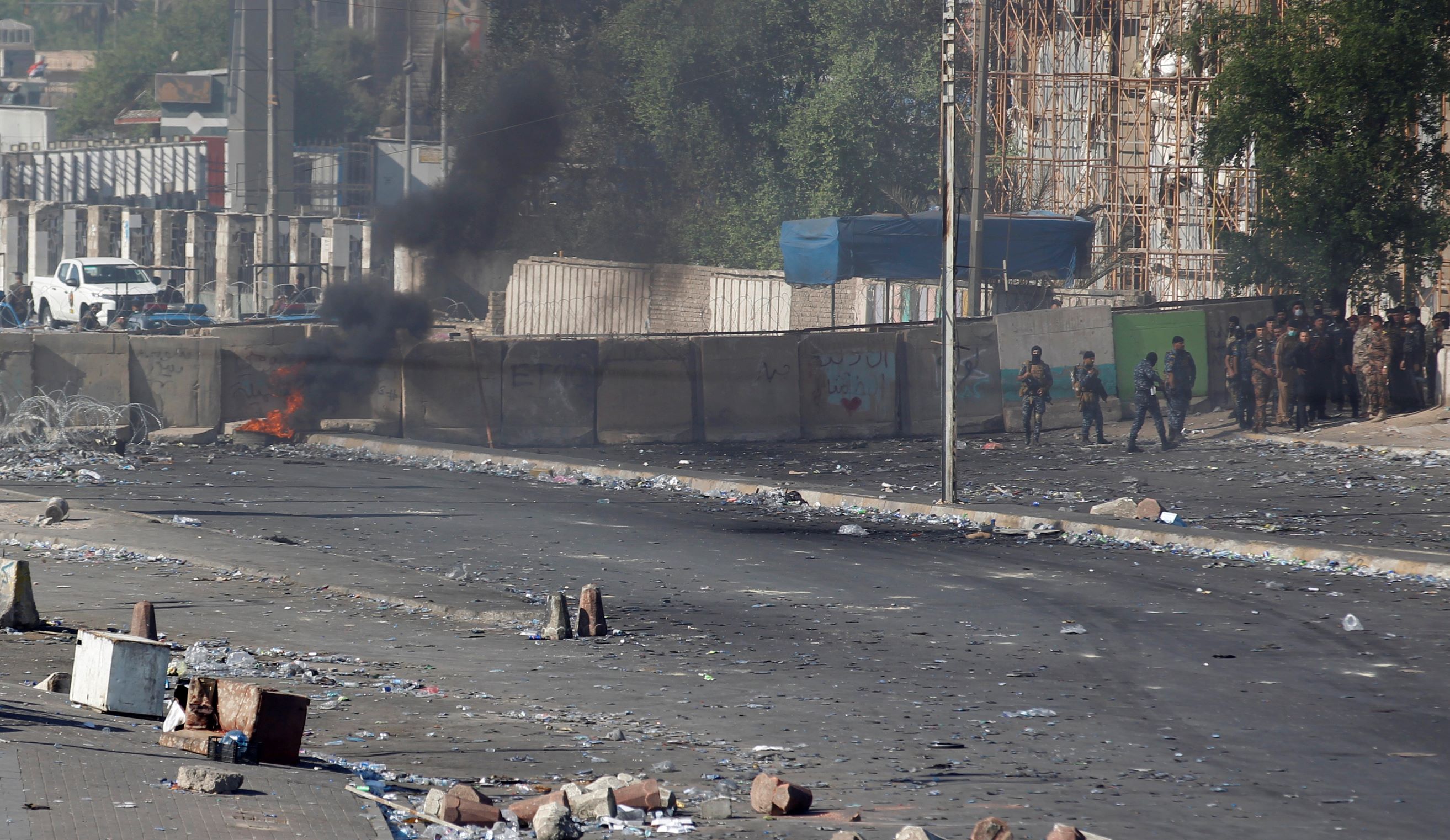 By Ahmed Rasheed and John Davison

BAGHDAD (Reuters) – Dozens of demonstrators were killed across Iraq on Thursday and Friday as violent protests against government corruption swelled into a mass spontaneous uprising sweeping much of the country, the worst unrest since the defeat of Islamic State.

Prime Minister Adel Abdul Mahdi called for calm but protesters scorned his promises of political reform. The country’s most influential cleric pinned the blame for the violence on politicians who had failed to improve the lives of the public, and ordered them to meet the protesters’ demands.

Another politically powerful cleric pulled his opposition faction’s lawmakers out of parliament, a gesture certain to fuel the passions behind the unrest.

On the streets of Baghdad, a Reuters Television crew saw police snipers stationed on rooftops open fire on a crowd, critically wounding at least one protester hit in the neck.

The violence comes two years after Iraq put down the insurgency by the Sunni Muslim armed group Islamic State. The protests arose in the south, heartland of the Shi’ite majority, but has quickly spread, with no formal leadership from any organized political or sectarian movement.

Security and medical sources gave a death toll early on Friday of 46 killed in three days of unrest, the vast majority of the deaths in the last 24 hours as the violence accelerated.

“It is sorrowful that there have been so many deaths, casualties and destruction,” Iraq’s most influential cleric, Grand Ayatollah Ali al-Sistani, said in a letter read out by his representative during a sermon.

“The government and political sides have not answered the demands of the people to fight corruption or achieved anything on the ground,” said Sistani, who stays out of day-to-day politics but whose word is law for Iraq’s Shi’ites. “Parliament holds the biggest responsibility for what is happening.”

Populist cleric Moqtada al-Sadr, who leads the largest opposition bloc in parliament, ordered his lawmakers to suspend participation in the legislature until the government introduces a program that would serve all Iraqis.

“WE WALK AMONG YOU”

The violence is an unprecedented test for Adel Abdul Mahdi, a mild-mannered veteran politician who came to power last year as a compromise candidate backed by powerful Shi’ite groups that dominated Iraq since the downfall of Saddam Hussein in 2003.

In his overnight address, Abdul Mahdi pledged reforms but said there was no “magic solution” to Iraq’s problems. He insisted politicians were aware of the suffering of the masses: “We do not live in ivory towers – we walk among you in the streets of Baghdad,” he said.

A young man in a crowd fleeing sniper shots at a central Baghdad square in the morning was scornful. “The promises by Adel Abdul Mahdi are to fool the people, and today they are firing live gunshots at us,” he said.

“Today this was a peaceful protest. They set up these barricades, and the sniper is sitting right there since last night.”

Curfews were imposed in a number of cities. Authorities shut roads into the capital from the north and northeast and were sending reinforcements to Baghdad’s densely-populated east. Military convoys were being sent to Nassiriya.

Late on Thursday protesters in Baghdad gathered in darkness by a bonfire set among the flaming wreckage of an armored vehicle, across the Tigris River from the government compound.

“They are shooting live fire at the Iraqi people and the revolutionaries. We can cross the bridge and take them out of the Green Zone!” a man shouted to Reuters TV.

The unrest comes on the eve of Arbaeen, a Shi’ite pilgrimage which in recent years has drawn 20 million worshippers, trekking for days on foot across southern Iraq in the world’s biggest annual gathering, ten times the size of the Mecca Hajj.

Some pilgrims were already taking to the roads on Friday, although in smaller numbers than in recent years. Iran has closed one of the border crossings used by millions of pilgrims. Qatar has told its citizens to stay away.

A senior Iranian cleric blamed the unrest on the United States and Israel, saying they aimed to thwart the pilgrimage.

The protests could grow if they receive formal backing from Sadr, who has long denounced corruption and the political elite.

“We Sadrists support the protests by all means, but we would wait for orders from our leader Sayyed Moqtada before we would take to the streets,” a senior Sadrist politician, Awad Awadi, told Reuters. He called the protests “a revolution of hunger.”

Ahmed al-Kinani, a lawmaker from a party linked to a powerful Iran-backed militia, said most of the protesters were simply demanding their rights, but a minority were using the demonstrations to target the security forces. His party was willing to do what it takes to calm the situation, including accepting a reshuffling of cabinet ministries.

Two years after the defeat of the Islamic State Sunni militant movement, Iraq has finally been at peace and free to trade for the first extended period since the 1970s, with oil exports at record levels. But Iraqis say they have seen few benefits, with infrastructure still in ruins and jobs scarce.