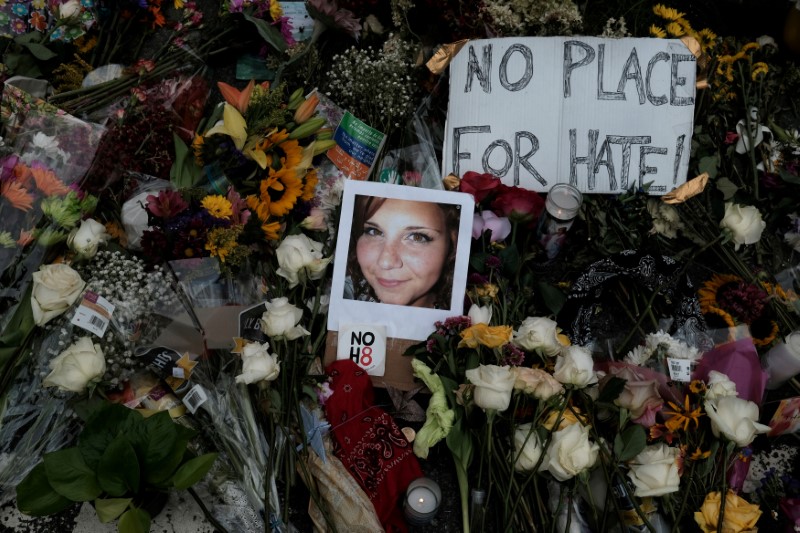 CHARLOTTESVILLE, Va. (Reuters) – Every few weeks, Susan Bro walks down 4th Street in downtown Charlottesville, Virginia, until she gets to a brick wall covered in chalked messages like “Love over hate” and “Gone but not forgotten.”

“I come just to absorb the energy of the place,” Bro, 61, said on Tuesday as she stood on the block now named for her daughter, Heather Heyer, who was killed a year ago while marching against a white supremacist rally.

Since August 12, 2017, when James Fields rammed his car into counter-protesters, killing 32-year-old Heyer and injuring several others, Bro has channeled her rage and grief into spreading the same message that drew her daughter downtown that day.

Bro said she made a promise to her daughter at her funeral, when she saw her bruised, broken body for the first time and broke down in tears.

Heyer’s death capped a day of clashes after hundreds of white supremacists, neo-Nazis and others descended upon the city, drawing national attention to the “alt right” movement that had grown bolder since President Donald Trump’s election.

Trump faced intense criticism after the protests when he seemed to equate the white nationalists with the counter-protesters, saying there were “very fine people on both sides.”

Bro said she chose not to return several phone calls from the White House after learning of the president’s remarks.

As the city prepares for the first anniversary of the so-called “Unite the Right” rally, Bro is readying herself for another difficult milestone in a year full of painful moments without Heather.

“The ‘firsts’ are always hardest,” she said, her voice cracking. “I got through the others: Mother’s Day, her birthday, Christmas. This will be the last one.” 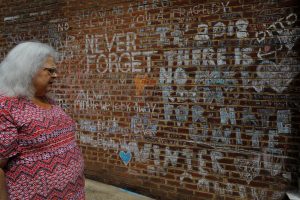 Bro said she would bring flowers to Heather Heyer Way on August 12 before speaking at an event to mark the anniversary.

Law enforcement agencies have made extensive plans to combat any potential violence, though the leader of last year’s gathering, local white nationalist Jason Kessler, failed to secure a permit for a sequel this year. Instead, he has obtained a permit to hold a rally in Washington outside the White House.

At Heyer’s memorial service, which drew nearly 2,000 mourners and was broadcast live on large screens, Bro said the national response to the tragedy was “just the beginning of Heather’s legacy.”

“They tried to kill my child to shut her up. Well guess what? You just magnified her,” she said, drawing a standing ovation.

Within weeks of Heyer’s death, Bro created the Heather Heyer Foundation, in part to install a formal and legal structure to handle the hundreds of thousands of dollars in funds that poured in from sympathizers around the country.

Bro runs the foundation from her home and from an office at a Charlottesville law firm, filled with tributes to Heyer that she has received over the last year: a portrait painted by an artist, a humanitarian award given posthumously by the Muhammad Ali Center, notes written by Heyer’s friends at her memorial service.

The foundation has organized a scholarship program and is planning to launch a social justice youth program.

Bro found herself making appearances on Ellen DeGeneres’ talk show and at MTV’s Video Music Awards. She acknowledged that the intense media attention has caused resentment among some activists in Charlottesville who feel the focus on Heyer, a white woman, has distracted from the racial issues at the core of the clashes.

It has been a bit of a balancing act, she said, to amplify Heyer’s message without making it seem as though her daughter was the only victim who mattered. She noted that violence against black people often does not generate the same level of interest and warned against the “white-centered” narrative that portrayed Heyer as a leader rather than simply one of many people who decided to march.

“The issues have not changed,” Bro said. “We still have police shootings, over-policing, a lack of affordable housing, the prison pipeline.”

A year after burying her daughter, Bro reflected on the activism that brought Heyer to the protests.

“The point of Heather’s death is that we have a responsibility to rise up to address that hate,” Bro said. “Don’t sit by and wring your hands.”