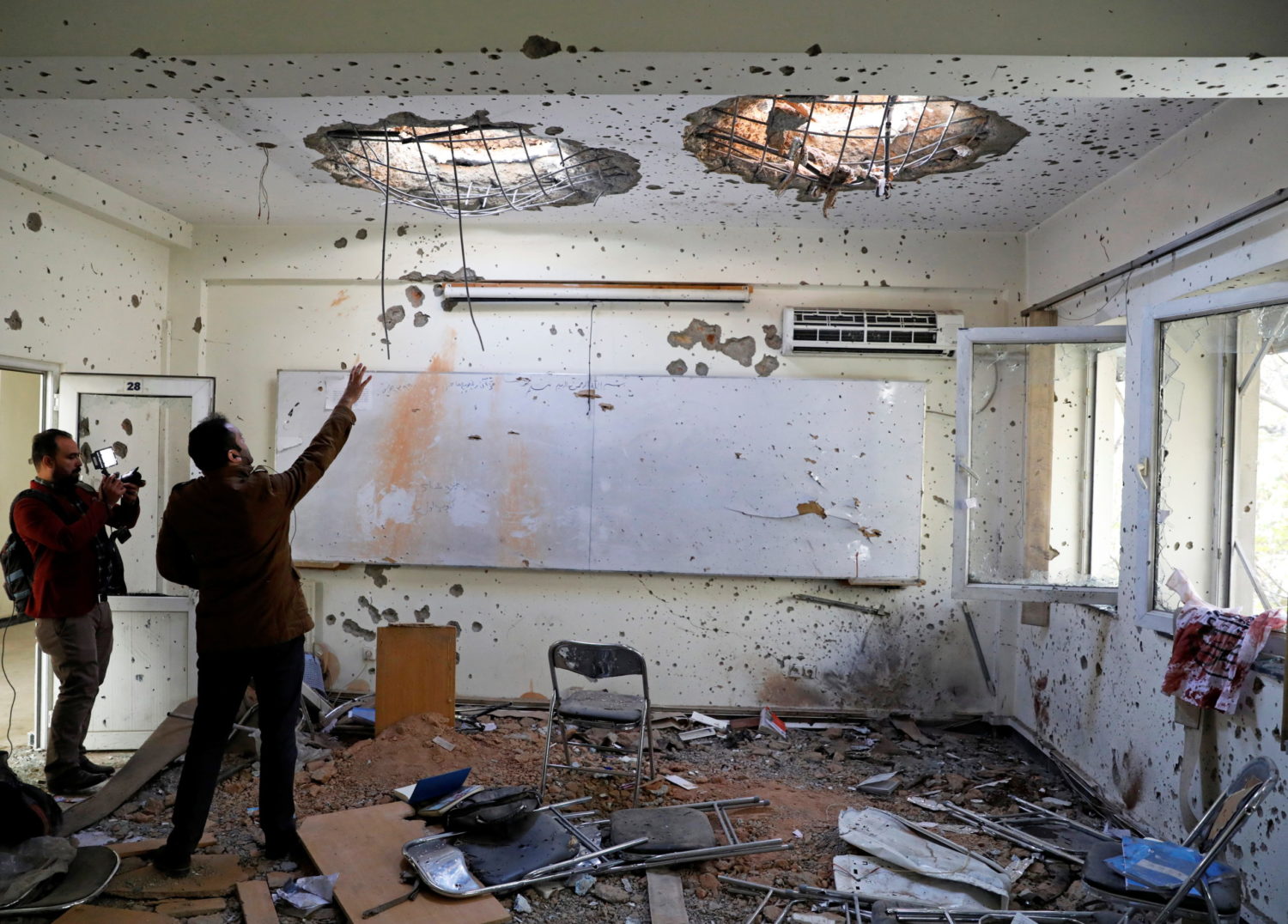 KABUL (Reuters) – As Mohammad clambered out of a second-floor window at Kabul University on Monday to escape gunmen rampaging across the campus, he was sure death was close.

Minutes earlier, the 20-year-old had been sitting in his classroom in the Afghan university’s National Legal Training Center building, waiting for a lecturer at the start of what should have been a regular Monday morning.

Then three gunmen began shooting, killing at least 35 in an attack on unarmed young people that has shocked a country where insurgent violence is common despite peace talks between Taliban militants and the U.S.-backed government.

“Sounds of screaming, gunshots and hand grenade explosions reverberated inside the building,” Mohammad, who asked to go by his first name, told Reuters by ‘phone. “Many lives and dreams were shattered.”

The brazen attack has been claimed by Islamic State, a jihadist group that is an enemy of the Taliban and not part of Afghanistan’s halting peace process.

The Taliban, which wants a share of power as U.S. troops withdraw after nearly 20 years of shoring up the government in Kabul, has denied involvement in Monday’s massacre.

That has done little to reassure a nation where trust in the Taliban – responsible for killing thousands of civilians and government troops in recent years – is at a low ebb.

The fact that young people were specifically targeted just over a week after a suicide bomber killed 24 people – most aged between 15 and 26 – at a Kabul education centre, has only heightened the sense of anger and loss.

About a hundred students gathered near Kabul University campus on Tuesday to protest against the peace talks, which are being held in Doha.

“We want to raise our voices to the world and say we shall never give up,” said M. Younus, one of the demonstrators. “No matter how many they kill, we will continue our studies.”

The gunmen entered the building Mohammad was in – located beside an entrance to the campus – at around 11 a.m. (0630 GMT).

Officials say they are still piecing together the sequence of events. They have yet to establish whether the attackers entered the campus by force or if arms had been stored on site to be accessed after they entered the grounds.

“With the start of gunshots I looked outside and saw well-equipped men in police force uniforms running toward our building,” said Mohammad, a third year student in the law and political science faculty.

It was not clear whether he was referring to the insurgents or security forces who engaged them in battle. In some previous militant attacks in Afghanistan, perpetrators have disguised themselves as members of the police or army.

Along with his classmates, Mohammad rushed to wedge chairs and tables in front of their classroom door to stop the attackers from entering. As the explosions and gunshots neared, the students desperately looked for a way to escape.

“Our class had windows facing the rear of the building where there are many trees; using the trees we managed to climb down,” said Mohammad, who heard screams behind him from the building he had fled.

“I saw death coming for me, I don’t know whose prayers saved me.”

A short distance away on the sprawling campus, Somaya Mohammadi, 20, had been taking notes in her Islamic Culture lecture when she looked out of the window and saw a large number of students running frantically toward the exit gate.

“One of the students shouted that suicide attackers had entered the university,” Mohammadi, a student at the Faculty of Engineering, recalled.

There was shock and panic as she and her classmates grabbed their belongings and rushed out of the building.

Mohammadi said she froze in fear.

“I was shivering and could not walk at all … I got out of the building with the help of my friends.”

Outside, there was chaos.

“Everyone was running … the university was very crowded,” said 21-year-old Niloufar Alamyar.

A third year student, Alamyar had been training to be a journalist – a difficult and dangerous job in Afghanistan. But she was not prepared for what she saw.

“I did not think I would ever see such a scene in life,” she said, adding that students were directed to flee via the south gate of the campus, away from where the attackers had entered and were exchanging heavy fire with security forces.

The battle continued for some six hours, according to officials.

LUCKY TO BE ALIVE

Mohammad, Mohammadi and Alamyar made it out alive, unharmed. Others were less fortunate.

“I saw an attacker pass by the classroom. When he returned, he fired into the classroom. He killed and wounded a number of my classmates and then went to other classes.”

Outside, as Mohammadi fled, she desperately tried to call her best friend Marzia, who did not respond. She was to meet Marzia after class to return a book she had borrowed.

“Bring it tomorrow after the class,” Marzia, who was in the final year of a public policy course, had texted the night before. The two had been friends for nine years and graduated school together.

When Marzia did not answer, Mohammadi called one of her classmates, who informed her that Marzia was dead.

“I just could not believe it,” said Mohammadi, who stumbled across a picture of Marzia on social media laying lifeless on the floor, covered in blood.

“Marzia was very talented student, and she was top of her class,” said Mohammadi, weeping. “I’ll miss her loud laugh and jokes. I still can’t believe she is no more.”