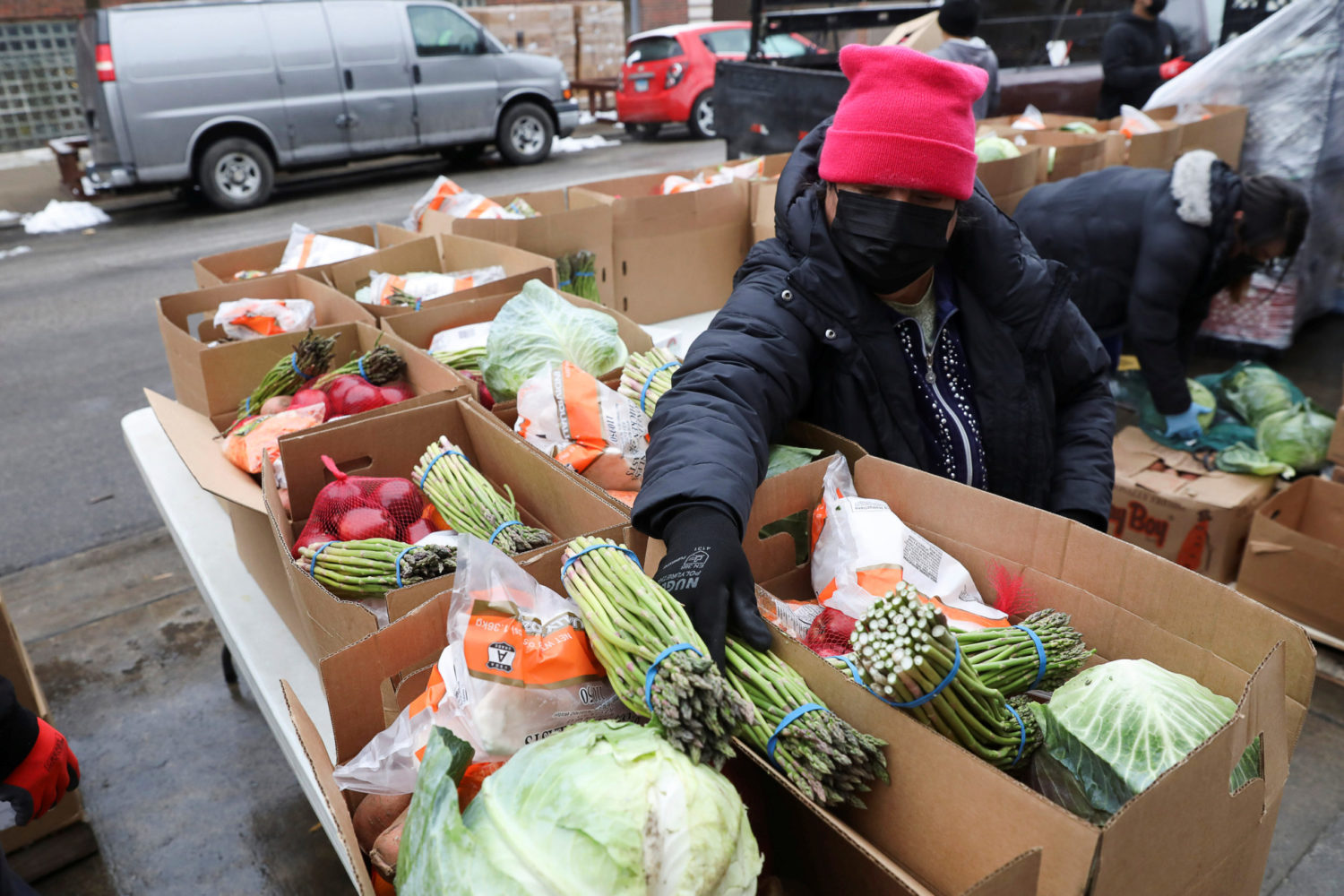 By Christopher Walljasper and Donna Bryson

CHICAGO (Reuters) – On a recent morning in Chicago’s Southwest side, young workers hefted boxes of food into vans for delivery. Borders staked out by rival gangs prevented many hungry people from visiting the New Life Centers’ food distribution site. So workers brought the food to them.

A year ago, food had a small role at New Life Centers, a church and community outreach program that works to defuse gang tensions. Since June 2020 however, the organization has partnered with local food banks and donors to provide food to around 6,000 families each week. It will continue the stepped-up effort even when the pandemic is over, finding that food delivery opens doors for conflict-resolution workers.

The United States, the world’s richest country, had pockets of hunger before the pandemic put millions of people out of work last year. But now the problem has intensified in urban and rural areas where residents do not have consistent access to nutritious food. Demand at Feeding America, a national network of food banks, rose by 60% during the pandemic.

Even as the U.S. economy recovers with government stimulus and falling COVID-19 cases, hunger worsens. The Congressional Budget Office in February predicted the number of Americans using food stamps to buy food would peak at 44 million in 2022, up from 36.8 million pre-pandemic, before starting to decrease in 2023.

In the past, food security was mainly the concern of food banks and food pantries, but now all kinds of community organizations and other groups are getting involved – from anti-violence workers in Chicago to New York City probation officers. Meanwhile, food pantries nationwide have changed in ways that will continue post-pandemic.

Working with partners such as the Food Bank for New York City, the New York probation department has in recent months increased from once to three times a week the number of days the Nutrition Kitchen food pantries it runs are open and plans to continue the longer hours after the pandemic. The department sees the food pantries as a way to address recidivism as well as to help the wider community.

“People can’t get back on their feet if they’re hungry,” said Steve Cacace, who as director of the probation department’s Community Resource Unit leads the pantry project.

The department also will keep turning to people on parole to help out at the pantries. In some cases, as when Eric Burks started packing boxes of food and tracking the numbers of people served at a Nutrition Kitchen in his home borough of Queens, it can help people complete community-service hours.

“I finished my community service, I started coming back every day,” Burks said. After a day in which he might help serve more than 200 people at the pantry, he uses a shopping cart to deliver food to neighbors who are unable to make the trip to the Nutrition Kitchen.

In Chicago, New Life Centers’ executive director, Matt DeMateo, has seen an opportunity for young people to be empowered “as givers.”

When her college transitioned to online learning during the pandemic, Diana Franco, 20, dropped out and poured more time into volunteering at New Life Centers. With government grants and private donations, the center hired 15 new employees to manage food aid, including Franco as food distribution coordinator.

It is not just in big cities that people have risen to the challenge of hunger in a pandemic.

Schoolteacher Courtney Walker helps run a food pantry with her family in Atwood, a village of about 1,000 in southern Illinois. Walker said her pantry at Atwood First Baptist, working with partners such as the Eastern Illinois Foodbank, served about 60 families a month before the pandemic and more than 100 by last summer.

Her husband Tim, a mechanic, said Atwood families regularly drive 40 miles (64 km) to stock up at a full-service grocery store on items they cannot obtain at their local Dollar General store. People on fixed incomes in Atwood cannot always afford the gasoline. The pandemic recession, Tim Walker said, revealed how many were “a paycheck away from not being able to afford three meals a day.”

The Walkers started pre-packing boxes of food to limit contacts that could have spread the coronavirus. They are eager to return to allowing people to browse the pantry shelves as if they were in a grocery store, which they say is more dignified.

But in Wisconsin, the Walworth County Food Pantry said it will continue contactless delivery. Giving pre-packed boxes of food to cars is more hygienic and efficient and requires fewer volunteers than having people crowd in to indoor facilities, employees said.

In Denver, the organization that runs one of the city’s largest pantries is calling for more direct cash payments from the federal government to allow people to shop for themselves in stores, moving away from a model that largely relies on food that might otherwise go to waste being distributed to the needy by food pantries.

“We’d like to cut ourselves out of the equation,” said Teva Sienicki, CEO of the Denver pantry organization Metro Caring.

The Biden administration’s stimulus plan includes payments of $1,400 for eligible Americans as well as periodic payments in the second half of the year in the form of an expanded child tax credit.

Sienicki said putting “cash in people’s pockets” allows them to buy items like diapers or toothpaste that are not covered by food stamps.

Pantries such as Metro Caring’s can support people after an emergency, Sienicki said. But she questioned how efficiently, effectively and fairly they can serve large numbers of people who could take years to recover from the pandemic recession.

(Reporting by Christopher Walljasper in Chicago and Donna Bryson in Denver; Writing by Donna Bryson; Editing by Caroline Stauffer and Matthew Lewis)