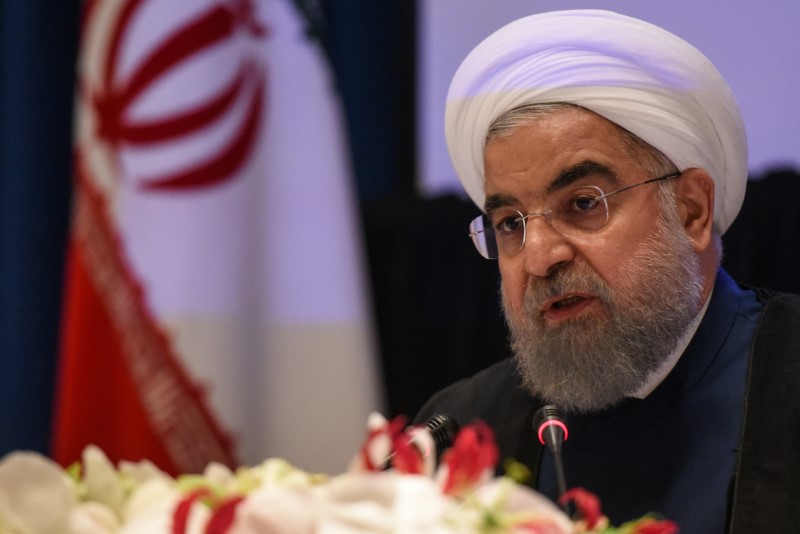 LONDON (Reuters) – In a swipe at his hardline rivals, President Hassan Rouhani said on Monday young Iranian protesters were unhappy about far more than just the economy and they would no longer defer to the views and lifestyle of an aging revolutionary elite.

The pragmatic cleric, who defeated anti-Western hardliners to win re-election last year, also called for the lifting of curbs on social media used by anti-government protesters in the most sustained challenge to conservative authorities since 2009.

“It would be a misrepresentation (of events) and also an insult to Iranian people to say they only had economic demands,” Rouhani was quoted as saying by Tasnim news agency.

Rouhani, 69, suggested there was a generational element to the unrest, which appears to have been spearheaded by under-25s.

“We cannot pick a lifestyle and tell two generations after us to live like that. It is impossible… The views of the young generation about life and the world is different than ours,” he said.

The Revolutionary Guards, Iran’s security backbone since the 1979 revolution that created the Islamic Republic, said on Sunday the security forces had put an end to a week of unrest fomented by what it called foreign enemies.

The protests, which began over economic hardships suffered by the young and working class, spread to more than 80 cities and towns and has resulted in 22 deaths and more than 1,000 arrests, according to Iranian officials.

Hamid Shahriari, the deputy head of the Judiciary said that all ringleaders of the protests had been identified and arrested, and they would be firmly punished and might face capital punishment.

Two Iranian lawmakers said on Monday that a 22-year-old detainee has died in prison.

The director of the Prisons Organization, Mostafa Mohebbi, confirmed the death on the judiciary’s official website and said “Sina Ghanbari has hanged himself in a toilet on Saturday”.

Many of the protesters questioned Iran’s foreign policy in the Middle East, where it has intervened in Syria and Iraq in a battle for influence with rival Saudi Arabia.

IRANIANS CAN CRITICIZE “EVERYONE”

The country’s financial support for Palestinians and the Lebanese Shi‘ite group Hezbollah also angered Iranians, who want their government to focus on domestic economic problems instead.

Echoing some of his campaign rhetoric, Rouhani said on Monday people should be allowed to criticize all Iranian officials, with no exception.

Demonstrators initially vented their anger over high prices and alleged corruption, but the protests took on a rare political dimension, with a growing number of people calling on Supreme Leader Ayatollah Ali Khamenei, 78, to step down.

The Supreme Leader is commander-in-chief of the armed forces and appoints the heads of the judiciary. Key ministers are selected with his agreement and he has the ultimate say on Iran’s foreign policy. By comparison, the president has little power.

“No one is innocent and people are allowed to criticize everyone,” said Rouhani.

“People’s access to social media should not permanently be restricted. We cannot be indifferent to people’s life and business,” Rouhani said.

Morteza Mousavian, head of information technology in the ministry of culture, was quoted as saying by Donya-e-Eqtesad Daily on Sunday that 9,000 business entities have been affected by the ban on Telegram.

Half of Iran’s 80 million population use Telegram.

State television showed live pictures of more pro-government rallies in several cities, including Sanandaj in western Iran, and Sari in north, as marchers carried posters of Ayatollah Khamenei and chanted slogans in his support.

Iranian Vice-President Masoumeh Ebtekar tweeted on Monday that Rouhani has insisted that all detained students should be released.

Mohammad Bathaei, the education minister said on Monday there were many school children among the detainees and he was asking for their release before exam season.

Amnesty International said last week that more than 1,000 Iranians had been arrested and detained in jails “notorious for torture and other ill-treatment over the past seven days”, with many being denied access to families and lawyers. 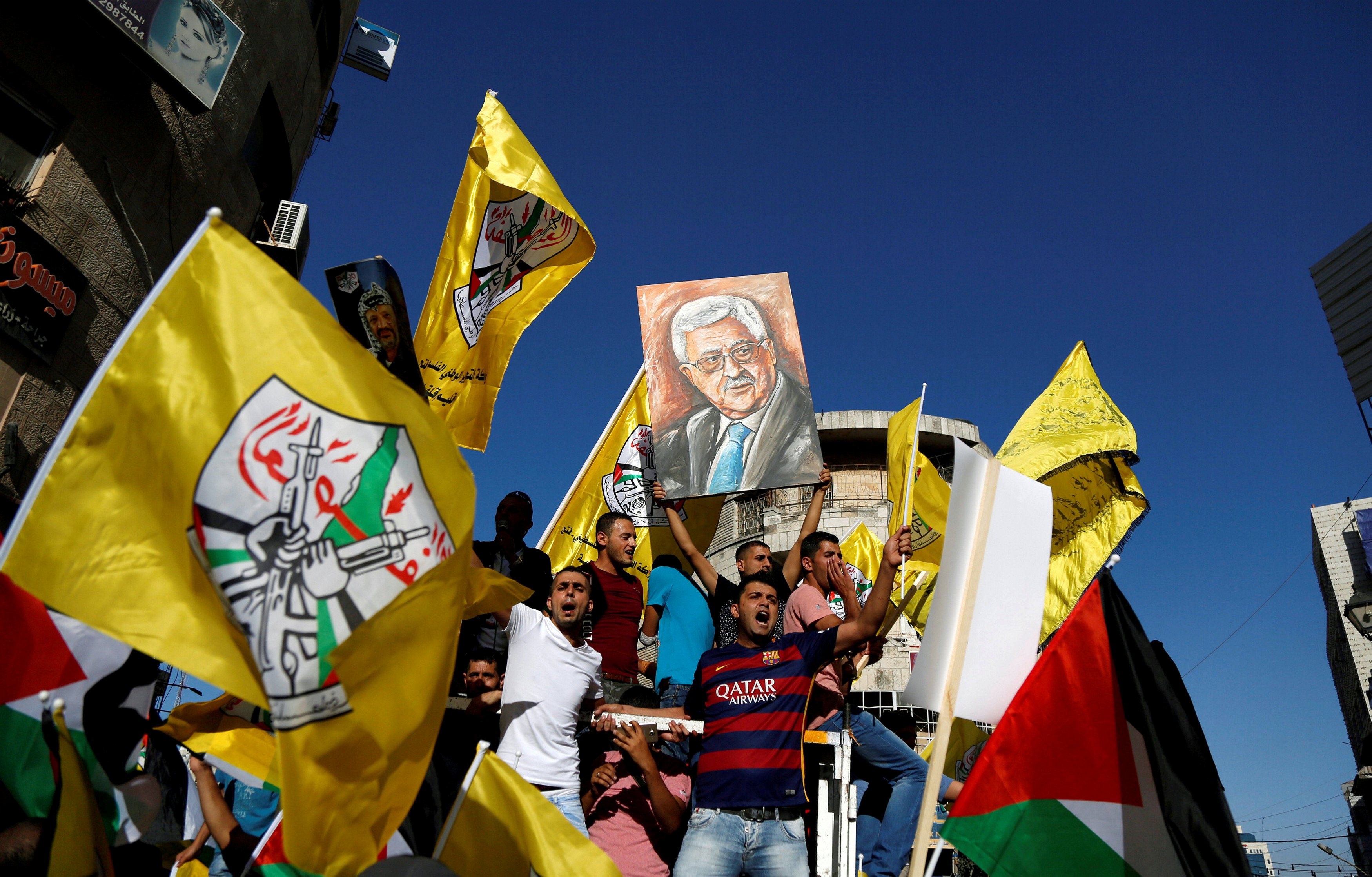 By Ali Sawafta and Nidal al-Mughrabi

RAMALLAH/GAZA (Reuters) – Saudi Arabia, Egypt and other Arab states are piling pressure on Palestinian President Mahmoud Abbas to resolve divisions in his Fatah party and with the rival Hamas movement, amid growing concerns about whether Palestinian democracy is under threat.

Neighboring states, diplomats and major funders fear the festering divisions could lead to conflict, and say the lack of a clear transition process raises questions about what would happen if the 81-year-old Abbas, in power since 2005 despite his mandate expiring, were to die in office.

In a non-binding paper circulated last month, Saudi Arabia, Egypt, Jordan and the United Arab Emirates made recommendations for tackling splits that have deepened over the past year, while strengthening Palestinian leadership and trying to keep the stalled peace process with Israel alive.

“Efforts to unite Fatah and empower it are aimed at balancing the Palestinian internal arena and this falls under the responsibilities of the head of the movement, Abu Mazen,” the two-page paper said, referring to Abbas by his nickname.

Among the recommendations was the holding of “free and fair” elections for parliament and the presidency by July 2017, although there are no indications that will happen. They would be the first parliamentary elections since January 2006.

“The primary reasons are Abbas’s systematic mismanagement of such relationships, and a weakness of leadership that has opened greater opportunities for Arab and foreign interference in Palestinian internal affairs,” said Mouin Rabbani, a senior fellow with the Institute for Palestine Studies.

In a clear signal of its growing frustration, Saudi Arabia, which normally provides around $20 million a month to the Palestinian budget, has not made any contributions since April, according to the Palestinian finance ministry’s website.

Palestinian officials say Riyadh is withholding the funds because it first wants to see progress on unity within Fatah and with Hamas, the Islamist group that controls Gaza.

With the United States, the European Union and individual EU member states having already cut their contributions, the Palestinian budget faces a severe shortfall this year, which the World Bank puts at around $600 million.

Asked about the pressure from Arab states, Abbas’s spokesman Nabil Abu Rdainah declined to comment directly but said the focus of Fatah and the Palestine Liberation Organization, which Abbas also chairs, has always been on Palestinian unity.

“Any attempt to intervene in the independence of Palestinian national decision-making will fail, just as it has failed throughout the past 40 years,” he said. Abbas himself has said nothing in public about the political process in months.

Rabbani said it was increasingly clear the race to succeed Abbas had begun, with a number of rivals positioning themselves for the day he is gone.

Abbas faces several challenges. Opinion polls show Palestinians have lost confidence in his leadership, and if parliamentary elections were held tomorrow, it is possible Hamas would win in both Gaza and in the West Bank, where Fatah and Abbas have traditionally been stronger.

At the same time, factions within Fatah are growing more agitated, with rival groups emerging ahead of a party congress set to take place next month, the first since 2009.

Mohammed Dahlan, a former Fatah security chief who fell out with Abbas and now lives in self-imposed exile in the United Arab Emirates, is a staunch Abbas critic who retains influence within Fatah’s revolutionary council and central committee.

Some senior Fatah figures want Abbas to reconcile with Dahlan, but the president shows no such inclination. At the party congress, Abbas is expected to push for the election of a new central committee and revolutionary council – the equivalent of Fatah’s parliament – that would be free of Dahlan loyalists.

Dahlan, 55, said that if Abbas did try to push such changes through, it would be “illegitimate”.

It “will represent the most dangerous split in the history of Fatah and will be regarded as a palace coup,” he told Reuters in written comments, adding that there were legitimate reasons to worry about a collapse in the democratic process.

“It is time to implement the will of the people and implement the law by electing a new leadership and not a new leader. There is a historical and national need to hold parliament and presidential elections,” he said.

In an analysis last week, the Carnegie Endowment for International Peace described Fatah, which has dominated Palestinian politics for more than 50 years, as “tearing itself apart”, with worrying implications for the future.

“It is likely that the split within Fatah will further widen if Dahlan is excluded from holding a leadership position,” it wrote. “Furthermore, the dispute between the Dahlan and Abbas factions could evolve into open warfare, which could mean instability or even violence – especially where Dahlan wields considerable power in the Gaza Strip, the northern West Bank and Palestinian refugee camps in Lebanon.”

This week has already seen unrest in some West Bank refugee camps where Dahlan has a strong following.

Diplomats say Dahlan has good ties with Egypt as well as the Gulf states. Cairo sees him as a helpful interlocutor with Hamas in Gaza, where Dahlan is from, and as someone with the energy and strength to shake up Palestinian politics.

Others, though, see Dahlan as the power behind the throne. Officials who have met him think he may act as a kingmaker, rather than a future Palestinian president, throwing his support behind another senior Fatah figure as leader.

A number of names crop up in both Palestinian and Israeli assessments, including Nasser al-Qudwa, the nephew of late Palestinian leader Yasser Arafat, Jibril Rajoub, a former security chief who heads the Palestine Football Association, and Majid Faraj, the head of Palestinian intelligence.

Yet the most popular Palestinian politician, according to opinion polls, remains Marwan Barghouti, a leader of the first and second uprisings against Israel who was convicted of murder by an Israeli court in 2004 and is serving five life sentences.