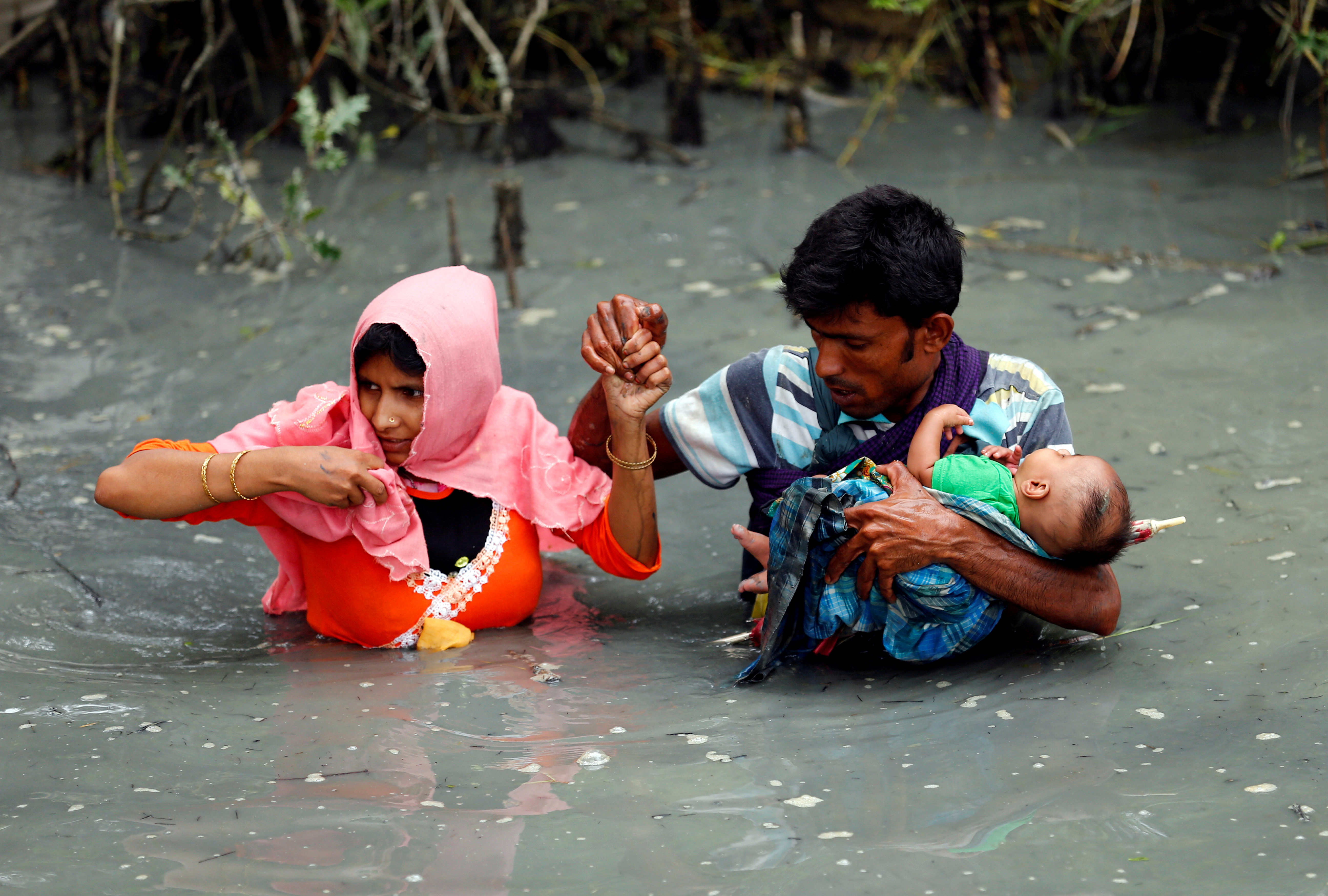 COX’S BAZAR, Bangladesh (Reuters) – An unprecedented surge of 270,000 Rohingya has sought refuge in Bangladesh over the past two weeks, the U.N. refugee agency said on Friday, as it announced a dramatic jump in the total as new pockets of people fleeing violence in Myanmar are found.

A rights group said satellite images showed about 450 buildings had been burned down in a Myanmar border town largely inhabited by Rohingya, as part of what the refugees say is a concerted effort to expel members of the Muslim minority.

Vivian Tan, a spokeswoman for the U.N. High Commissioner for Refugees, said the estimated number of Rohingya who fled to Bangladesh since violence erupted on Aug. 25 had risen from 164,000 on Thursday because aid workers had found big groups of uncounted people in border areas.

“This does not necessarily reflect fresh arrivals within the past 24 hours but that we have identified more people in different areas that we were not aware of,” she said, adding that the number was an estimate and there could be some double-counting.

“The numbers are so alarming – it really means that we have to step up our response and that the situation in Myanmar has to be addressed urgently.”

The wave of refugees, many sick or wounded, has strained the resources of aid agencies and communities which are already helping hundreds of thousands displaced by previous waves of violence in Myanmar. Many have no shelter, and aid agencies are racing to provide clean water, sanitation and food.

Two days ago, UNHCR had said the worst-case scenario was 300,000 refugees.

“We need to prepare for many more to come, I am afraid,” said Shinni Kubo, the Bangladesh country manager for the agency. “We need huge financial resources. This is unprecedented. This is dramatic. It will continue for weeks and weeks.”

While most refugees are coming on foot many are also braving the sea. At least 300 boats carrying Rohingya arrived in the Bangladesh border district of Cox’s Bazar on Wednesday, the International Organisation for Migration (IOM) said.

The latest flight of Rohingya from their homes in Myanmar began two weeks ago after Rohingya insurgents attacked security force posts in Rakhine State. That triggered an army counter-offensive in which at least 400 people were killed.

Buddhist-majority Myanmar says its security forces are fighting a legitimate campaign against “terrorists” it blames for the attacks on the security forces and for burning homes and civilian deaths.

It says about 30,000 non-Muslims have been displaced by the violence.

The 1.1 million Rohingya living in Myanmar have long complained of persecution. They are denied citizenship and regarded as illegal migrants from Bangladesh. 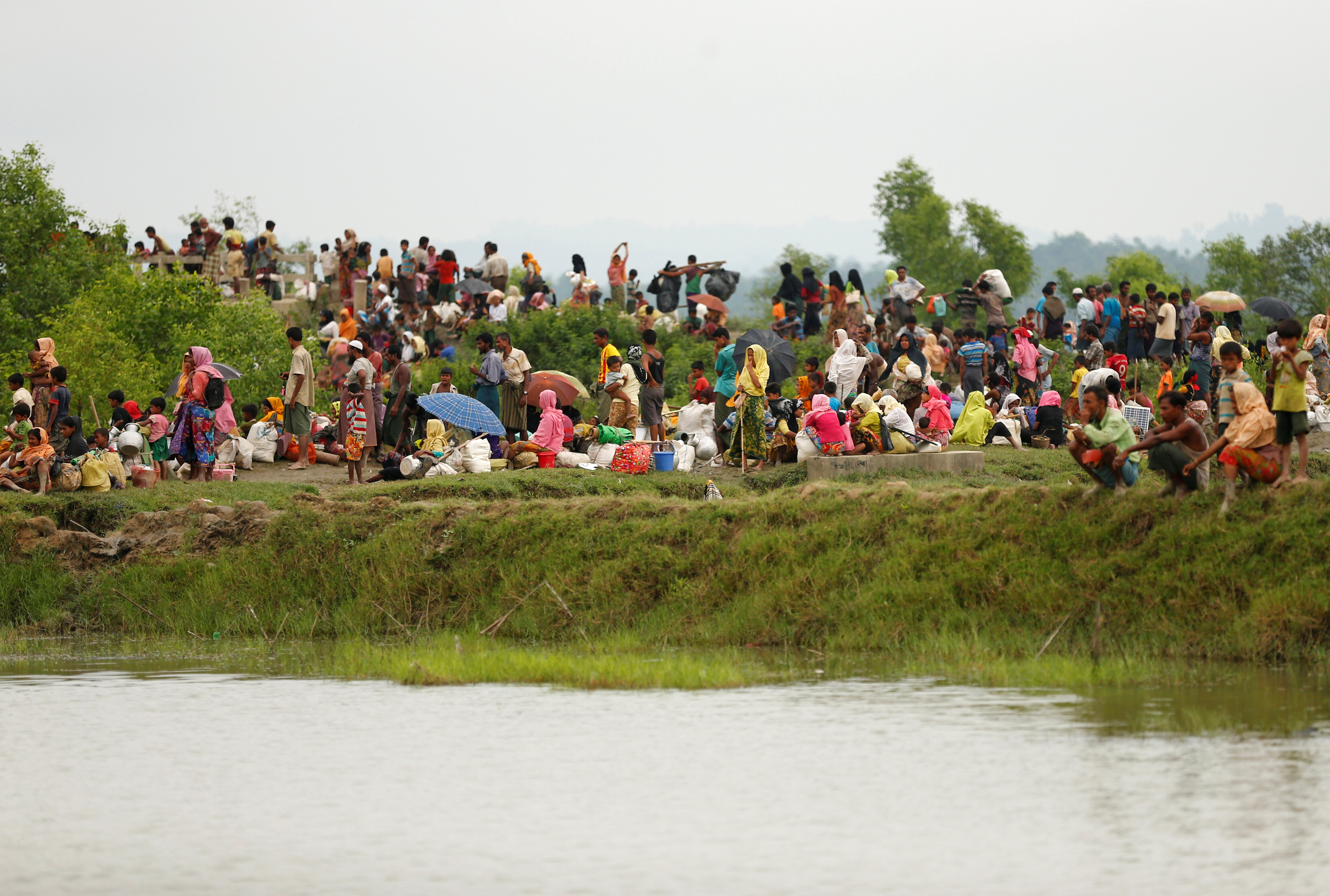 Rohigya refugees are seen waiting for boat to cross the border through the Naf river in Maungdaw, Myanmar, September 7, 2017. REUTERS/Mohammad Ponir Hossain

There is very limited access to the north of Rakhine State and few if any independent witnesses so the situation for Rohingya still there is a major concern, with fears a humanitarian crisis could be unfolding there too.

“What we know is what people are saying as they come across, and what they’re saying now, given this been going on since Aug. 25, is they are in an absolutely desperate state,” said Leonard Doyle of the IOM.

“They say living out in open, without protection from the tropical sun with their children, without enough food to eat.”

Bangladesh has proposed creating “safe zones” run by aid groups for Rohingya in Myanmar. But it would seem the plan is unlikely to be accepted there.

“If safety cannot even be found in area capitals, then no place may be safe,” said Phil Robertson, the group’s deputy Asia director.

A Myanmar reporter in the north of the state said he had got reports from residents of an area called Rathedaung that six villages had been torched and there had also been shooting in the area. It was not clear who was responsible.

Several thousand people held a protest in Dhaka, the Bangladesh capital, after Friday prayers against the crackdown on the Rohingya.

Protests were also held in Indonesia and Malaysia, also Muslim-majority countries. Scores of people staged protests outside the Myanmar embassies in Tokyo and Manila.

Malaysian Prime Minister Najib Razak said the Rohingya issue had to be resolved “at the source” and he was considering raising it when he holds talks with U.S. President Donald Trump next week.

Earlier, the head of Malaysia’s coastguard said it would not turn away Rohingya and was willing to provide them temporary shelter, although it is unlikely any refugees would travel hundreds of kilometers south by sea during the monsoon season.

The rainy season ends in late November, bringing calmer weather when more boats are likely to head for Southeast Asia.

The coastguard said it would watch waters near its Indian Ocean border with Thailand in anticipation of Rohingya arriving.

Thailand has also said it is preparing to receive people fleeing Myanmar, while Singapore said it was ready to help with the humanitarian effort. 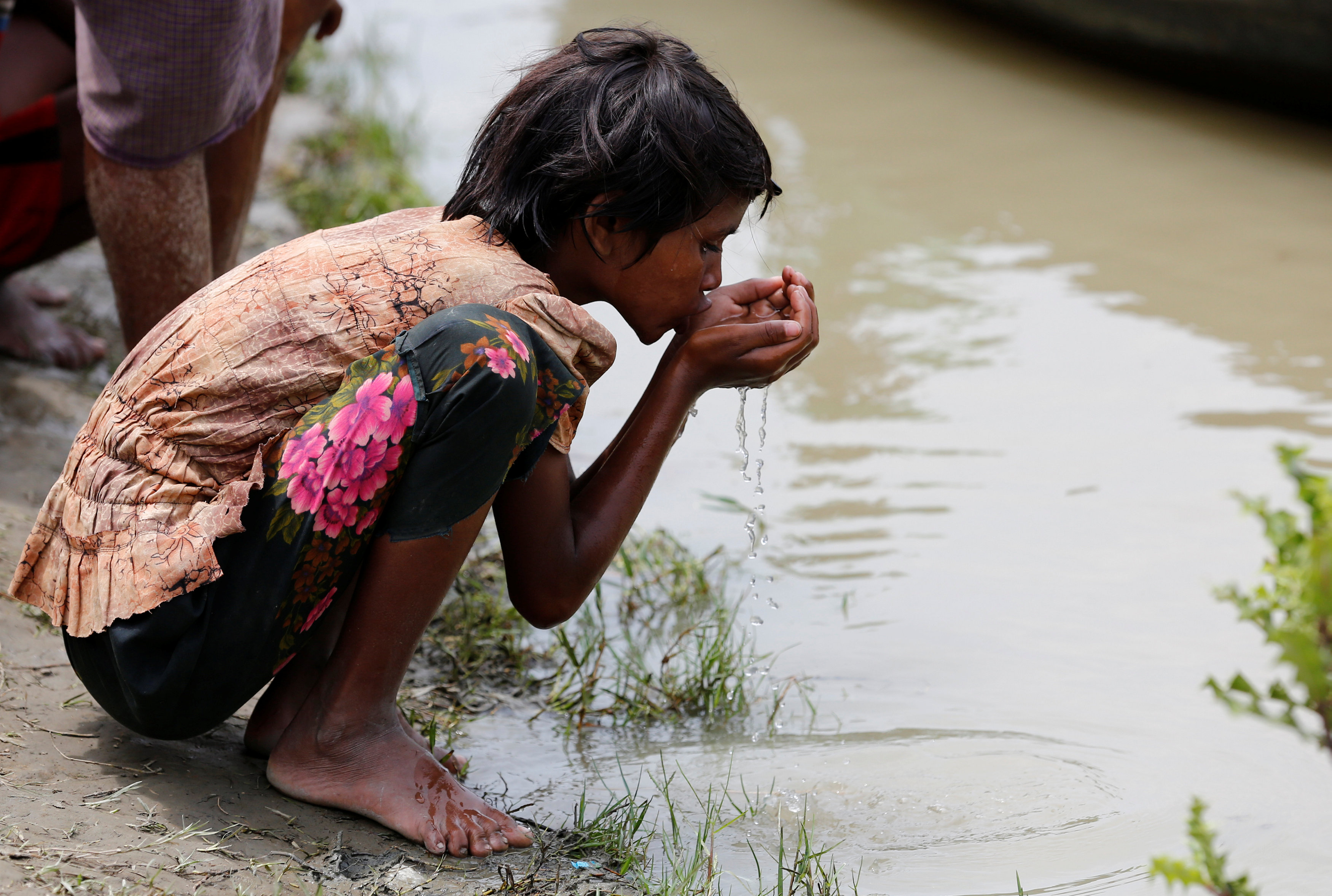 A Rohingya refugee girl drinks river water as she waits for boat to cross the border through Naf river in Maungdaw, Myanmar, September 7, 2017.REUTERS/Mohammad Ponir Hossain