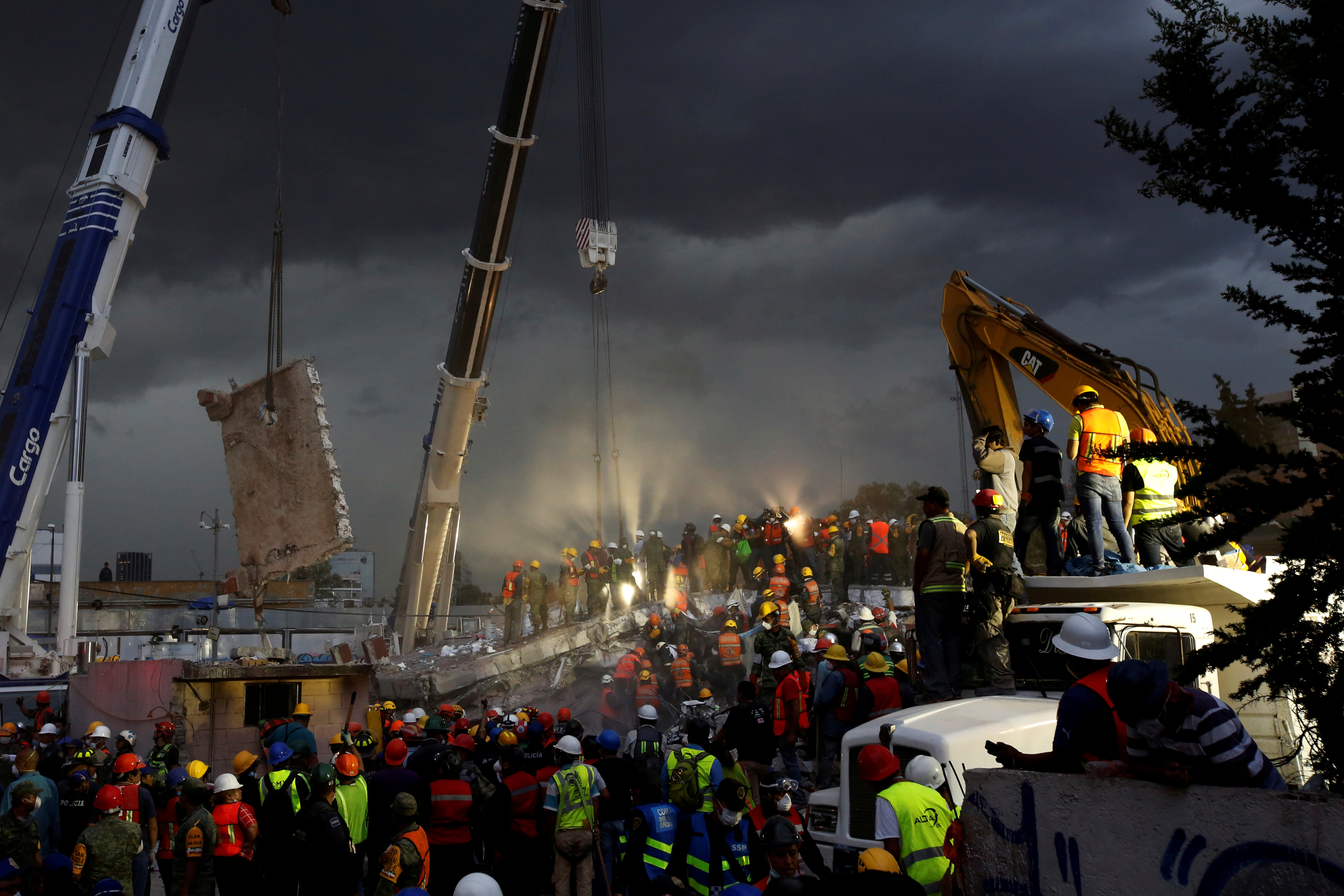 By Daniel Trotta and Adriana Barrera

MEXICO CITY (Reuters) – Rescuers labored against the odds as dawn broke on Thursday to save a 12-year-old schoolgirl and other possible survivors trapped beneath crumpled buildings in central Mexico following the country’s deadliest earthquake in 32 years.

More than 50 survivors have been plucked from several disaster sites in Mexico City since Tuesday afternoon’s 7.1-magnitude quake, leading to impassioned choruses of “Yes we can!” from the first responders, volunteers and spectators gathered around the ruins.

As the chance of survival diminished with each passing hour, officials vowed to continue with search-and-rescue efforts such as the one at a collapsed school in the south of the capital. At the site, Navy-led rescuers have communicated with the 12-year-old girl, but were still unable to dig her free.

Eleven other children were rescued from the Enrique Rebsamen School, where students are aged roughly six to 15. Twenty-one children and four adults there were killed.

Rescuers had earlier seen a hand protruding from the debris and the girl wiggled her fingers when asked if she was still alive, according to broadcaster Televisa, whose cameras had special access to the scene to provide nonstop live coverage.

But some 15 hours into the effort, Admiral Jose Luis Vergara said rescuers could not pinpoint the location of the girl, identified only as Frida Sofia.

“There’s a girl alive in there, we’re pretty sure of that, but we still don’t know how to get to her,” Vergara told Televisa.

“The hours that have passed complicate the chances of finding alive or in good health the person who might be trapped,” he said.

As Vergara spoke, a human chain of hard-hatted rescuers removed a large chunk of concrete from the floodlit scene.

Rescuers periodically demanded silence from bystanders to allow them to hear any calls for help.

As with other disaster sites throughout central Mexico, officials have not employed heavy-lifting equipment for fear of crushing survivors. Some 52 buildings collapsed in Mexico City alone and more in the surrounding states.

Throughout the capital, crews were joined by volunteers and bystanders who used dogs, cameras, motion detectors and heat-seeking equipment to detect victims who may still be alive.

“Faced with the force of nature, we are all vulnerable and that is why we all unite when it comes to saving a life or helping a victim,” said President Enrique Pena Nieto, who has declared three days of national mourning. “If anything distinguishes Mexicans, it is our generosity and fraternity.”

Pena Nieto said the priority was to reestablish basic services, conduct a census of damaged structures and rebuild.

The extensive damage to many buildings, some of them relatively new, has raised questions over construction standards that were supposed to have improved in the wake of a devastating 1985 quake. 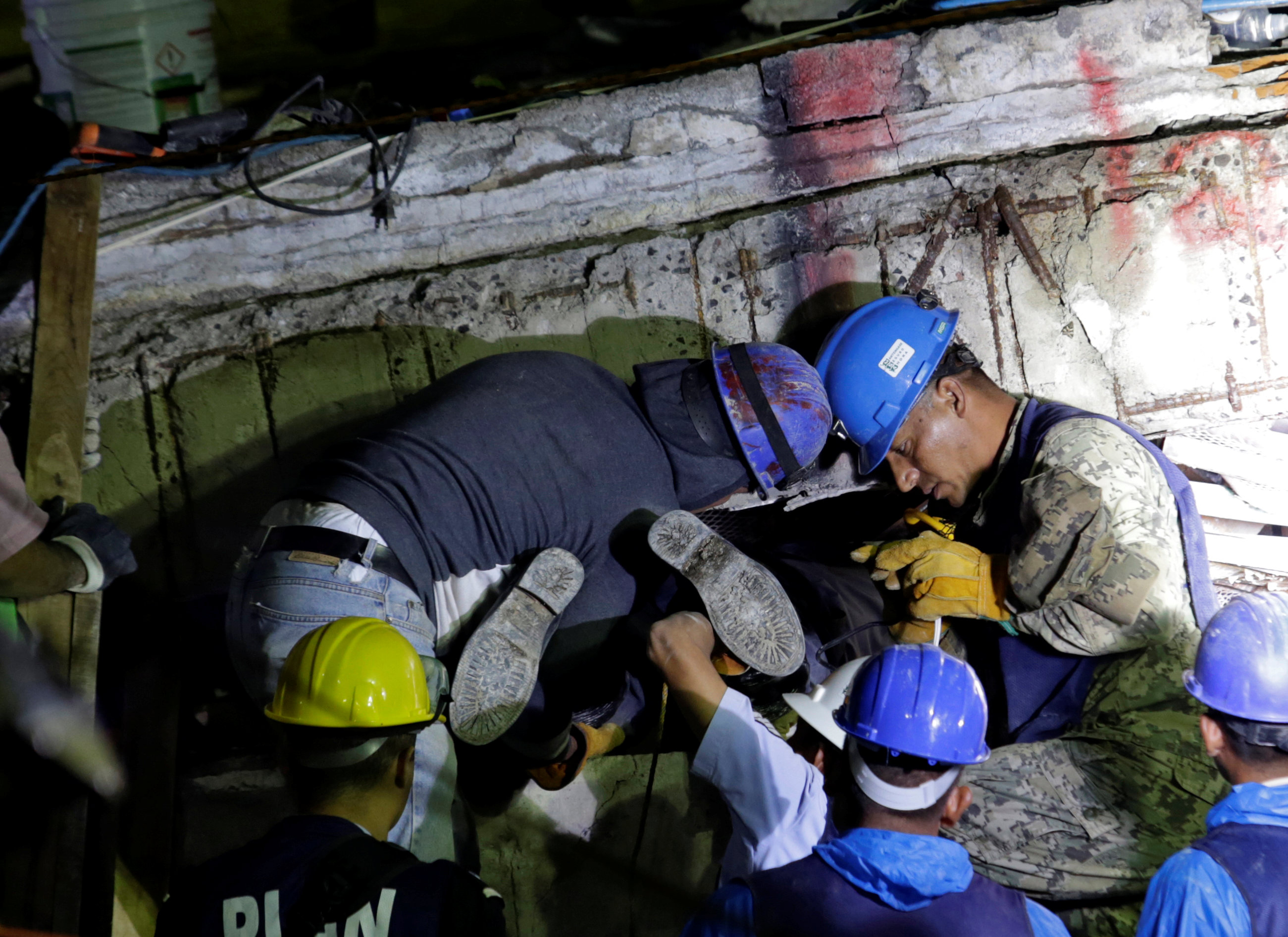 Members of a rescue team hold a fellow rescuer from the Topos volunteer search and rescue group by his feet during the search for students at the Enrique Rebsamen school after an earthquake in Mexico City, Mexico, September 21, 2017. REUTERS/Daniel Becerril

The quake killed 102 people in Mexico City and the remaining 135 from five surrounding states, officials said on Wednesday.

At least nine Latin American countries pledged search-and-rescue teams or technical assistance, as did the United States, Spain, Japan and Israel, and crews from Panama and El Salvador were already on the job.

The Panamanian team of 32 rescue workers dressed in orange jumpsuits and helmets and two dogs arrived with seven days’ worth of food, water and supplies and prepared to work around the clock, said Cesar Lange, leader of the Panamanian Civil Protection unit.

Leading the volunteer rescue efforts were Mexico City’s own ‘mole’ rescue workers, a search group formed in the wake of the 1985 quake and renowned for their fearless tunneling into damaged buildings to save survivors in disasters around the globe.

Tuesday’s temblor came on the anniversary of the 1985 quake that killed thousands and still resonates in Mexico. Annual Sept. 19 earthquake drills were being held a few hours before the nation got rocked once again.

The quake struck around 150 km (90 miles) southeast of Mexico City on Tuesday afternoon, shattering glass, shearing off the sides of buildings and leaving others in dusty piles of destruction.

Its epicenter was a mere 31 km (32 miles) beneath the surface, sending major shockwaves through the metropolitan area of some 20 million people. Much of the capital is built on an ancient lake bed that trembles like jelly during a quake. 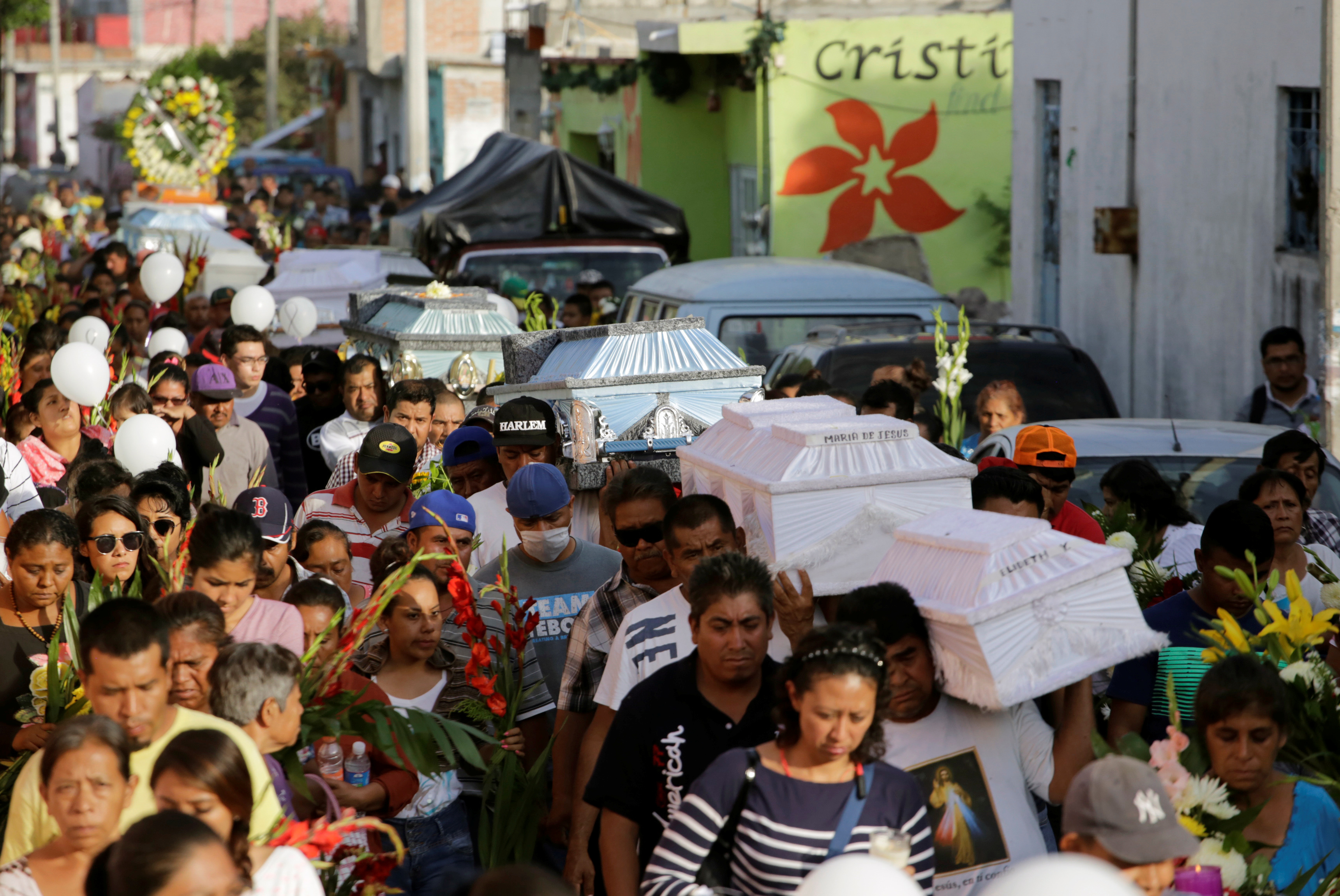 People accompany caskets, holding the bodies of victims who died in an earthquake, through the streets in Atzala, on the outskirts of Puebla, Mexico September 20, 2017. REUTERS/Imelda Medina

Some residents and volunteers voiced anger that emergency services and military were slow to arrive to poorer southern neighborhoods of the city, and that wealthier districts appeared prioritized.

Mexico was still recovering from another powerful quake less than two weeks ago that killed nearly 100 people in the south of the country.

Both Mexican earthquakes occurred along the Cocos tectonic plate, which skirts the western coast of Mexico and is slowly sliding beneath the North American plate.