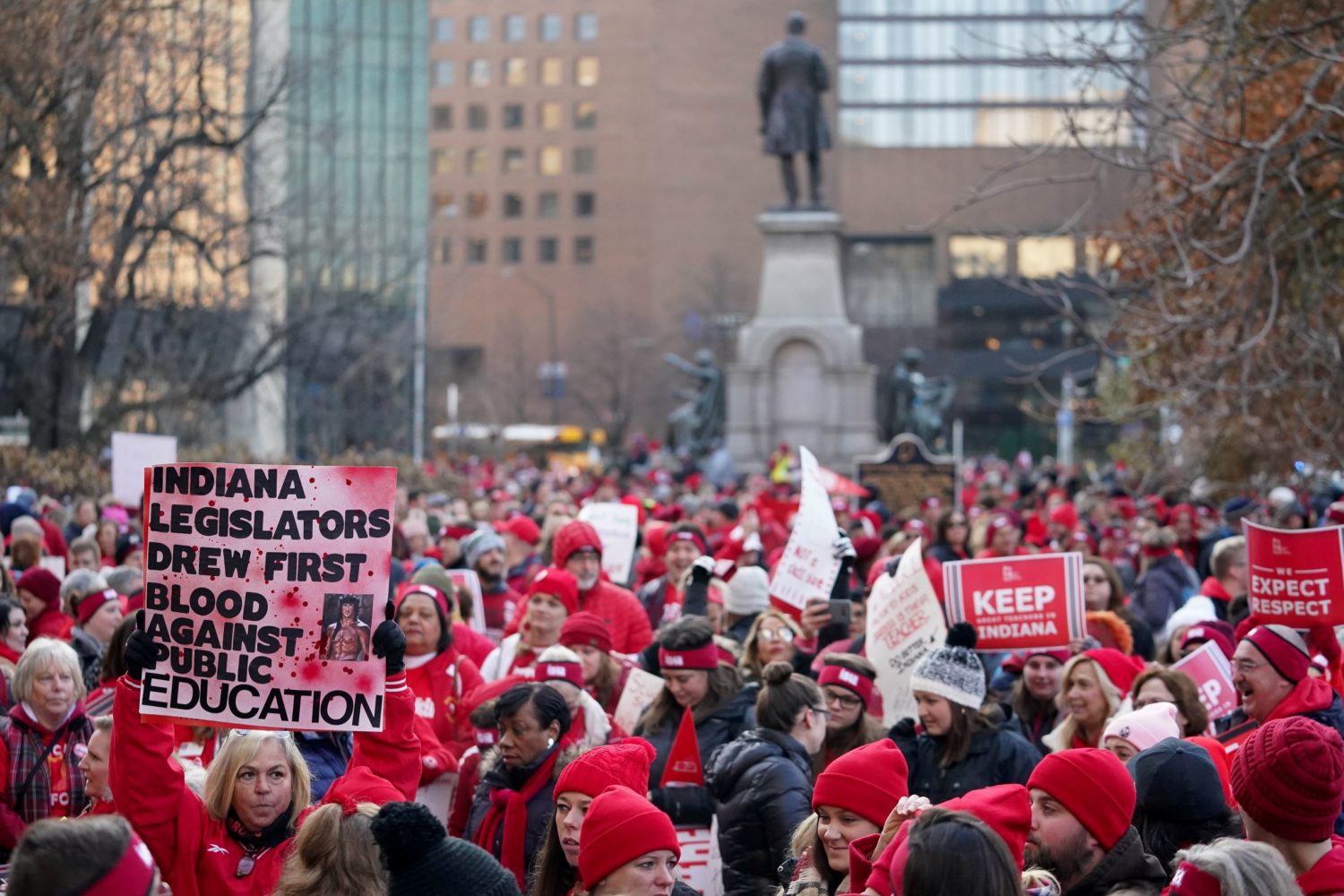 INDIANAPOLIS (Reuters) – Thousands of red-clad Indiana teachers swarmed the state capitol building on Tuesday, chanting loudly to protest low salaries and evaluation policies and forcing half the state’s school districts to cancel classes for the day.

“Indiana legislators drew first blood against public education,” read one of the signs hoisted by Indiana State Teachers Association demonstrators wearing red hats and sweaters as they stood at the steps of the capitol.

The “Red for Ed” protest was the latest in a wave of work stoppages by U.S. educators. In 2018, teachers in Arizona, West Virginia and Oklahoma staged largely successful days-long strikes to demand higher salaries.

Teachers in Chicago and Los Angeles also went on strike this year and secured more resources, especially for underfunded schools.

Indiana teachers make an average of $51,000 a year, in the bottom third of U.S. states for teachers’ pay, according to the National Education Association, the country’s largest labor union. The state school system has about 1.2 million students.

Teachers in the Midwestern state are asking the Republican-controlled state legislature to commit $700 million this year to boost the average salary statewide to $60,000, near the national average.

Amid frigid temperatures, chanting protesters waved placards reading “I can’t stay for the day, I have to go to my second job,” and “It’s time to use our ‘outside voices.'”

The teachers’ union expected some 15,000 teachers to use personal days to walk off the job as Indiana’s state law blocks them from striking. The state’s department of education could not confirm the number of teachers who were expected to attend.

Still, so many teachers had signed up for the protest that half the state’s 289 school districts have canceled classes, the union said.

“It all comes back to one word, which is respect,” said union Vice President Jennifer Smith-Margraf. “Teaching and education in general are not respected the way they used to be.”

State teachers are asking lawmakers to prevent new standardized testing scores from counting against teacher and school evaluations for this school year. They are also seeking to repeal a new law that requires them to take private-sector jobs for a time to renew their teaching licenses.

Republican Governor Eric Holcomb set up a commission to provide recommendations on teachers’ salaries before the 2021 legislative session.

“Governor Holcomb has made finding long-term sustainable solutions to improve teacher compensation a top priority,” a spokeswoman said on Monday.

(Reporting by Bryan Woolston in Indianapolis and Brendan O’Brien in Chicago; Editing by Scott Malone, Peter Cooney and Bernadette Baum)