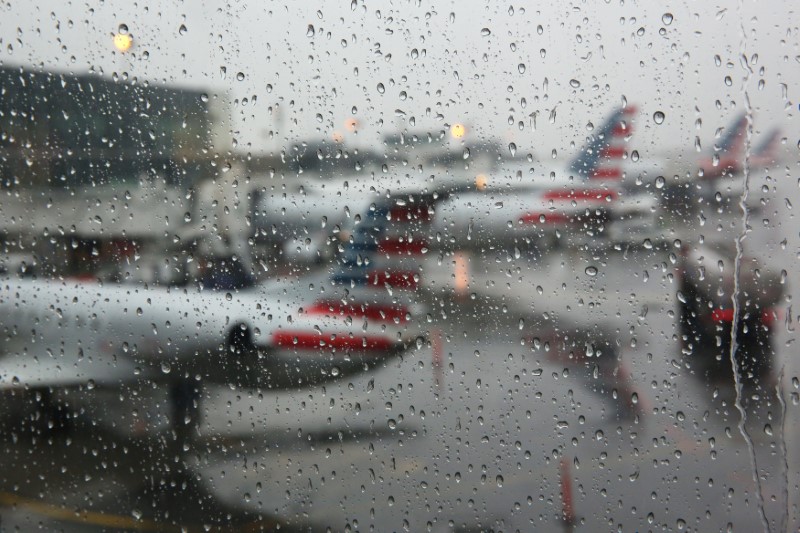 BOSTON (Reuters) – Seawater on Friday flowed onto some coastal streets around Boston, where businesses set up flood barriers and piled sandbags around their doors as a powerful storm threatened to flood pockets of the U.S. coast from Maine to Virginia.

Over 700,000 homes and businesses were without power in the U.S. Northeast, hundreds of flights were canceled at New York’s three major airports and Boston’s Logan International, and the federal government closed offices in Washington.

It was the second time this year that Boston streets, including areas around the Long Wharf and the rapidly developing Seaport District, flooded in a winter storm.

“It’s crazy. I guess this is sea-level rise in action,” said Bob Flynn, 38, who had stepped out from his work at Boston’s Children’s Museum to survey a partially submerged walkway along the city’s Fort Point Channel.

Heavy rains, extreme high tides and a wind-driven storm surge could combine to cause several feet of water to flow onto streets in coastal Massachusetts, with government and private weather forecasters warning of a repeat of an early-January storm that drove a couple of feet of icy seawater onto Boston’s streets. High winds gusting up to 60 miles per hour (97 kph) could also bring extensive power outages.

“The winds are going to keep on increasing and the seas are going to go higher and higher for the next three high tide cycles,” said Bill Simpson, a meteorologist with the National Weather Service in Taunton, Massachusetts. Floodwater surged in during high tide around 11 a.m. ET (1600 GMT), and forecasters warned that strong winds coming in off the ocean could keep levels high through the next two high tides.

Residents of coastal areas that regularly flood in storms, including the towns of Newburyport, Duxbury and Scituate had been encouraged to evacuate their homes and head to higher ground, said Chris Besse, a spokesman for the Massachusetts Emergency Management Agency.

He added that it is hard to predict where the storm will take its heaviest toll.

“It could be that the first high tide washes away dunes from one beach and the second washes away houses,” Besse said.

Sarah Moran, a 59-year-old mother of six, was fretting whether her family’s oceanfront home in Scituate, Massachusetts, south of Boston, would survive the storm.

“Every house south of mine has been washed away since the 1978 blizzard. That risk is part of the package – the house comes complete with ocean views, taxes, maintenance and risks,” she said in a phone interview from Burlington, Vermont, where she owns a catering business.

The National Weather Service had coastal flood watches and warnings in place from southern Maine through coastal Virginia, including New York’s eastern suburbs, and was also tracking a snowstorm heading east from the Ohio Valley that could drop significant amounts of snow in northern New York State. It forecast storm surges of up to 4 feet (1.2 meters) for eastern Massachusetts.

More than 700,000 homes and businesses were without power across the region, with the largest number of outages in New York, utilities said.

Federal offices closed on Friday in Washington, while dozens of schools throughout the region canceled classes. More than a quarter of flights into and out of New York’s three major airports and Boston’s airport were canceled, according to tracking service Flightaware.com.