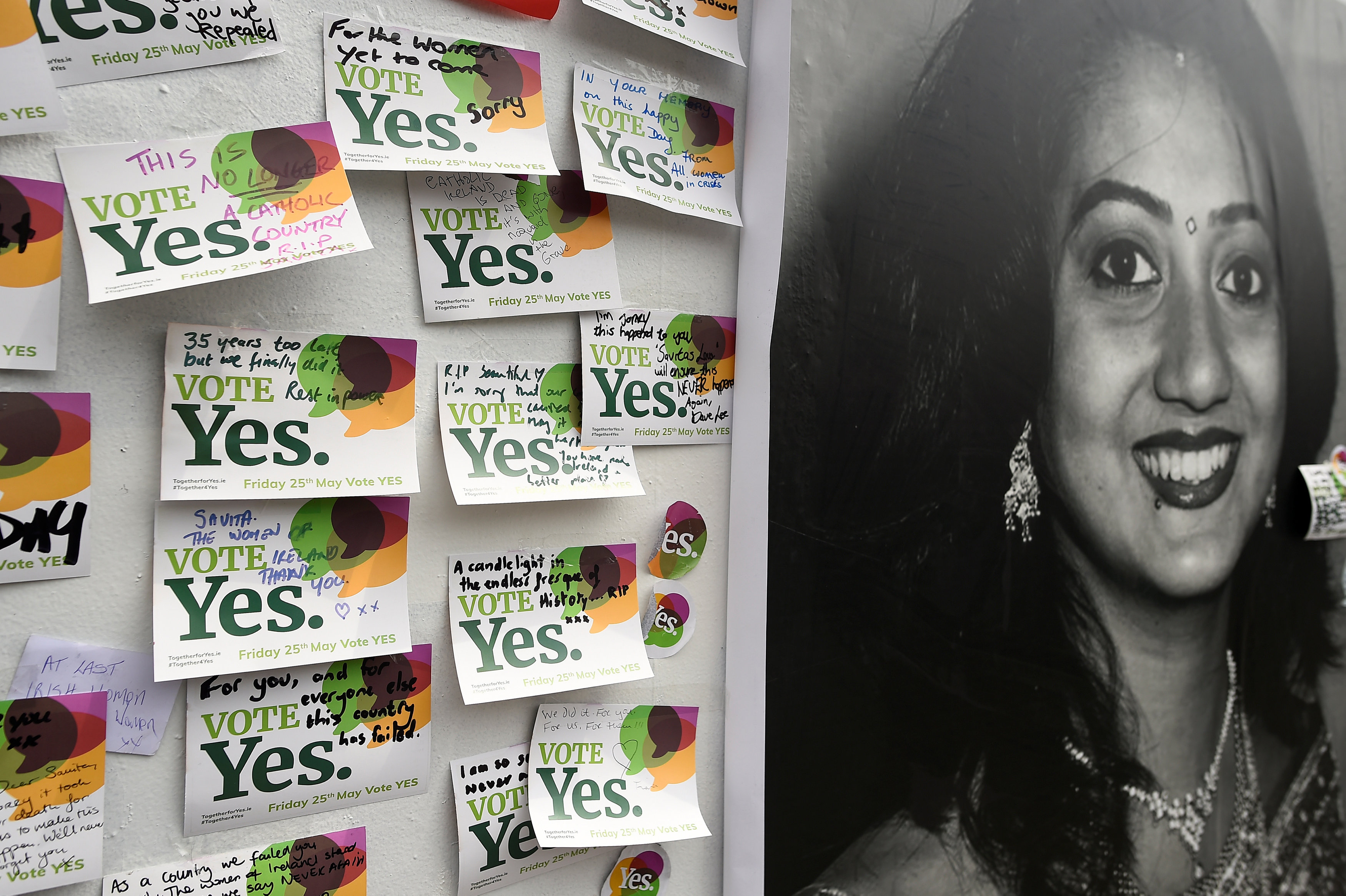 By Padraic Halpin and Conor Humphries

DUBLIN (Reuters) – Irish people paid homage on Sunday to an Indian immigrant woman whose death inspired a historic vote to repeal Ireland’s strict abortion laws while the Catholic Church rued the outcome saying it showed indifference to its teachings.

In a referendum on Friday, the once deeply Catholic nation voted to scrap a prohibition on abortion by a margin of two-to-one, a landslide victory that astonished campaigners as citizens of every age and background demanded the change they had spent decades fighting for.

The vote overturns a law which, for decades, has forced over 3,000 women to travel to Britain each year for terminations that they could not legally have in their own country. “Yes” campaigners had argued that with pills now being bought illegally online abortion was already a reality in Ireland.

Hundreds of people on Sunday continued to leave flowers and candles at a large mural in Dublin of Savita Halappanaar, the 31-year-old Indian whose death in 2012 from a septic miscarriage after being refused a termination spurred lawmakers into action.

Katy Gaffney, a 24-year-old baker who traveled home to Dublin from Berlin to vote, stood silently in front of the makeshift memorial crying. 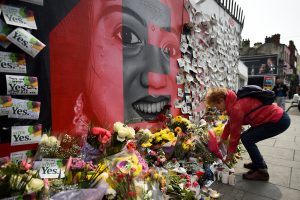 “I am relieved but devastated that it had to come to this,” she said.

Others, many with tears in their eyes, pinned messages to the wall. One read: “I’m so sorry this happened to you before the country woke up. My vote was for you.” Another: “I’m sorry we let you down. It won’t be in vain.”

“It’s not a high. It’s more of a relief,” said Lynda Cosgrave, a 35-year-old legal associate, wearing the black sweatshirt with ‘Repeal’ in white that become the symbol of the youthful “Yes” campaign.

“I thought when I came in last night it would be jubilant, but it was a bit down. It’s a bit sad. I don’t think we ever thought it would actually happen.”

The campaign was defined by women publicly sharing their painful experiences of going abroad for procedures, a key reason why all but one of Ireland’s 40 constituencies voted “Yes”.

The government of Prime Minister Leo Varadkar, who campaigned to repeal the laws, will begin drafting legislation in the coming week to allow abortions with no restriction up to 12 weeks into a pregnancy by the end of the year.

Many lawmakers who campaigned for a “No” vote said they would not try to block the bill.

The outcome was a new milestone on a path of change for the country of 4.8 million which only legalized divorce by a tiny majority in 1995 before becoming the first in the world to adopt gay marriage by popular vote three years ago.

With the vote making newspaper frontpages across the world, French President Emmanuel Macron wrote on Twitter that “Ireland has once again made history.” He called the vote an essential symbol for women’s freedom.

In Britain, Prime Minister Theresa May faces a showdown with ministers and lawmakers in her Conservative party after refusing to back reform of highly restrictive abortion laws in the British province of Northern Ireland which has a 500 km (312 mile) land border with Ireland.

Ireland’s push to liberalize its laws is in contrast to another traditionally Catholic European country, Poland, where the ruling conservative party and still powerful church are seeking to ban most abortions.

In Ireland though, the once all-powerful Catholic Church, which has seen its public influence collapse since the 1980s after a string of child sex abuse scandals, took a back seat throughout the referendum campaign.

In churches across the country on Sunday there was only regret at the outcome.

Archbishop of Dublin Diarmuid Martin told parishioners that the church had to “renew its commitment to support life.”

“Many will see the results of Friday’s referendum as an indication that the Catholic Church in Ireland is regarded today by many with indifference and as having a marginal role in the formation of Irish culture,” Martin said in a homily published by the Archdiocese of Dublin.

Bishop Brendan Leahy of Limerick called the result “deeply regrettable and chilling for those of us who voted ‘No’.” He asked those attending mass to pray for healing in Irish society.

Calling on colleagues to move quickly on legislation, Minister for Children Katherine Zappone reminded lawmakers that Irish women would still have to travel across the water to Britain for terminations until they acted.

“Women are leaving the country today,” she told national broadcaster RTE. “We have to be aware of that and have that sense of urgency in order to legislate as soon as possible.”