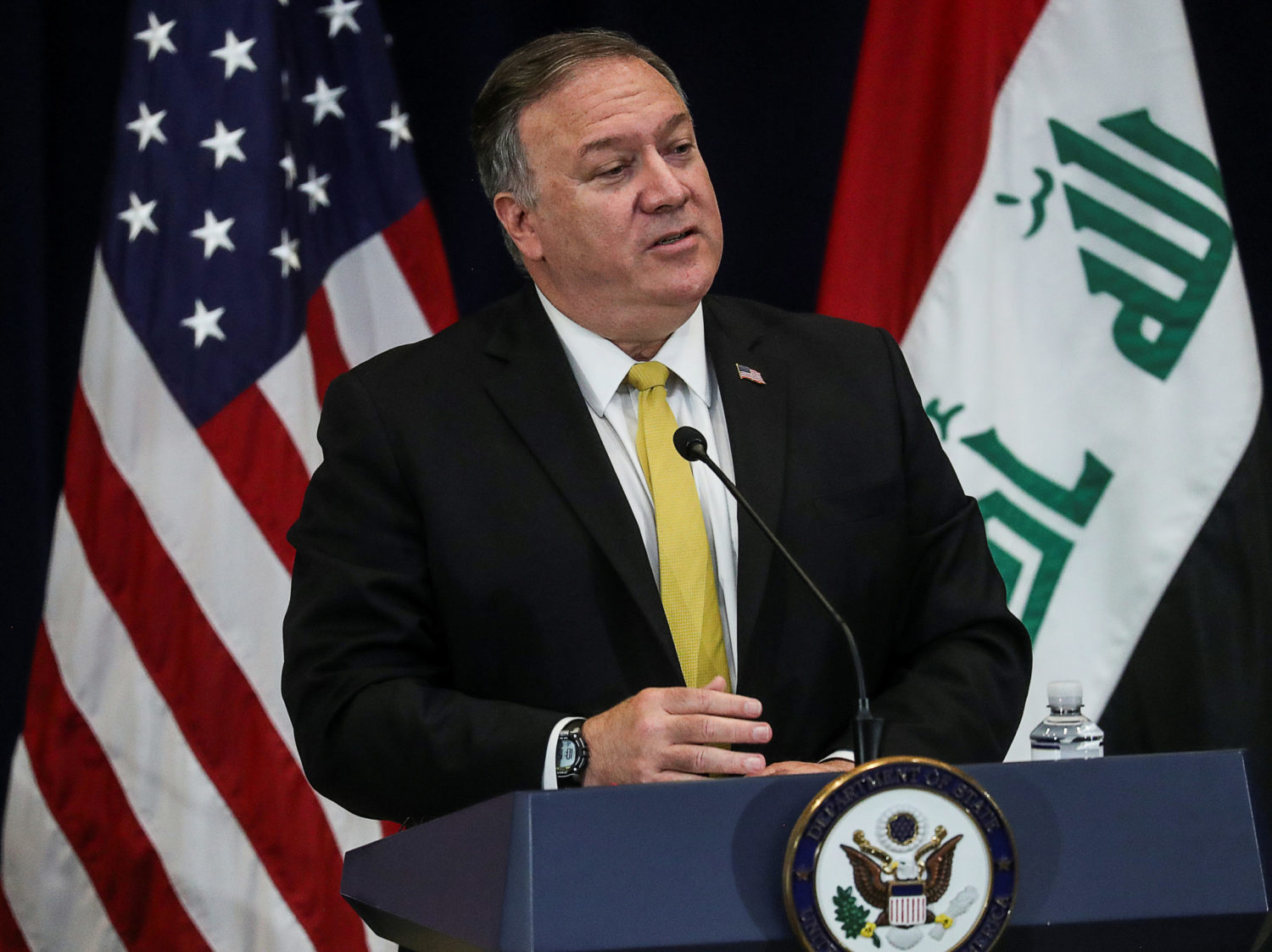 BAGHDAD (Reuters) – Washington has made preparations to withdraw diplomats from Iraq after warning Baghdad it could shut its embassy, two Iraqi officials and two Western diplomats said, a step Iraqis fear could turn their country into a battle zone.

Any move by the United States to scale down its diplomatic presence in a country where it has up to 5,000 troops would be widely seen in the region as an escalation of its confrontation with Iran, which Washington blames for missile and bomb attacks.

That in turn would open the possibility of military action, with just weeks to go before an election in which President Donald Trump has campaigned on a hard line towards Tehran and its proxies.

Secretary of State Mike Pompeo threatened to close the embassy in a phone call a week ago to President Barham Salih, two Iraqi government sources said. The conversation was initially reported by an Iraqi news website.

By Sunday, Washington had begun preparations to withdraw diplomatic staff if such a decision is taken, those sources and the two Western diplomats said.

The concern among the Iraqis is that pulling out diplomats would be followed quickly by military action against forces Washington blamed for attacks.

Populist Iraqi cleric Moqtada al-Sadr, who commands a following of millions of Iraqis, issued a statement last week pleading for groups to avoid an escalation that would turn Iraq into a battleground.

One of the Western diplomats said the U.S. administration did not “want to be limited in their options” to weaken Iran or pro-Iranian militias in Iraq. Asked whether he expected Washington to respond with economic or military measures, the diplomat replied: “Strikes.”

The U.S. State Department, asked about plans to withdraw from Iraq, said: “We never comment on the Secretary’s private diplomatic conversations with foreign leaders … Iran-backed groups launching rockets at our Embassy are a danger not only to us but to the Government of Iraq.”

In a region polarized between allies of Iran and the United States, Iraq is the rare exception: a country that has close ties with both. But that has left it open to a perennial risk of becoming a battle ground in a proxy war.

That risk was hammered home in January this year, when Washington killed Iran’s most important military commander, Qassem Soleimani, with a drone strike at Baghdad airport. Iran responded with missiles fired at U.S. bases in Iraq.

Since then, a new prime minister has taken power in Iraq, supported by the United States, while Tehran still maintains close links to powerful Shi’ite armed movements.

Rockets regularly fly across the Tigris towards the heavily fortified U.S. diplomatic compound, constructed to be the biggest U.S. embassy in the world in central Baghdad’s so-called Green Zone during the U.S. occupation after a 2003 invasion.

In recent weeks rocket attacks near the embassy have increased and roadside bombs targeted convoys carrying equipment to the U.S.-led military coalition. One roadside attack hit a British convoy in Baghdad, the first of its kind against Western diplomats in Iraq for years.

Two Iraqi intelligence sources suggested plans to withdraw American diplomats were not yet in motion, and would depend on whether Iraqi security forces were able to do a better job of halting attacks. They said they had received orders to prevent attacks on U.S. sites, and had been told that U.S. evacuations would begin only if that effort failed.

Iraqis are concerned about the impact of November’s presidential election on the Trump administration’s decision-making.

While Trump has boasted of his hard line against Iran, he has also long promised to withdraw U.S. troops from engagements in the Middle East. The United States is already drawing down its force sent to help defeat Islamic State fighters in Iraq from 2014-2017.

Some Iraqi officials dismissed Pompeo’s threat to pull out diplomats as bluster, designed to scare armed groups into stopping attacks. But they said it could backfire by provoking the militias instead, if they sense an opportunity to push Washington to retreat.

“The American threat to close their embassy is merely a pressure tactic, but is a double-edged sword,” said Gati Rikabi, a member of Iraq’s parliamentary security committee.

He and another committee member said U.S. moves were designed to scare Iraqi leaders into supporting Prime Minister Mustafa al-Kadhimi, who has tried to check the power of Iran-aligned militia groups, with scant success.

HAWKS ON BOTH SIDES

The militias are under public pressure to rein in supporters who might provoke Washington. Since last year, public opinion in Iraq has turned sharply against political groups seen as fomenting violence on behalf of Iran.

Publicly, the powerful Iran-backed Shi’ite militia groups which control large factions in parliament have tried to distance themselves from attacks on Western targets.

U.S. officials say they think the Shi’ite militias or their Iranian backers have created splinter offshoots to carry out such attacks, allowing the main organizations to evade blame.

A senior figure in a Shi’ite Muslim political party said he thought Trump might want to pull out diplomats to keep them out of harm’s way and avoid an embarrassing pre-election incident.

Militia attacks were not necessarily under Tehran’s control, he said, noting that Iran’s foreign ministry had publicly called for a halt to attacks on diplomatic missions in Iraq.

“Iran wants to boot the Americans out, but not at any cost. It doesn’t want instability on its Western border,” the Shi’ite leader said. “Just like there are hawks in the U.S., there are hawks in Iran who have contact with the groups carrying out attacks, who aren’t necessarily following state policy.” 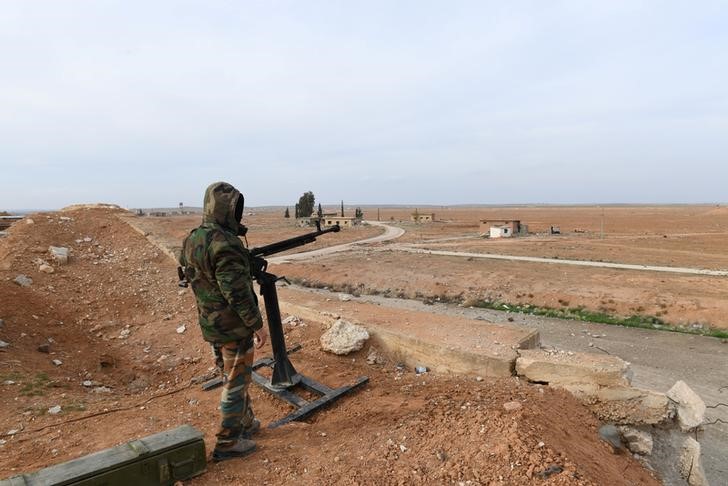 By Phil Stewart and Lisa Barrington

WASHINGTON/BEIRUT (Reuters) – The U.S.-led coalition and its local allies in Syria struck pro-government forces with deadly air and artillery fire overnight to repel “an unprovoked attack” near the Euphrates, the coalition said on Thursday.

The incident underscores the potential for further conflict in Syria’s oil-rich east, where the U.S.-backed Syrian Democratic Forces (SDF) alliance of Kurdish and Arab militias holds swathes of land after its offensive against Islamic State.

Syrian President Bashar al-Assad, who is supported by Russia and by Shi’ite militias backed by Iran, has said he wants to take back every inch of Syria.

The pro-government forces were “likely seeking to seize oilfields in Khusham” east of the Euphrates in Deir al-Zor province, said a U.S. official speaking on condition of anonymity.

The attack was carried out by 500 troops backed by artillery, tanks, multiple-launch rocket systems and mortars but the coalition and its local allies killed more than 100 of them, the official said.

Syrian state television reported that the coalition had caused “dozens of dead and wounded” by bombing pro-government forces. But a commander in the military alliance supporting Assad disputed the death toll, saying seven pro-government forces were killed and 27 injured.

The U.S.-led coalition had alerted Russian officials about the presence of SDF forces in the area far in advance of the thwarted attack, the U.S. official said.

“Coalition officials were in regular communication with Russian counterparts before, during and after the thwarted (enemy) attack,” the official said.

The United States and Russia maintain regular contacts in eastern Syria to prevent unexpected confrontation between the forces they support there.

Russia’s Defence Ministry said the pro-government militias involved in the incident had been carrying out reconnaissance and their activities had not been previously agreed with Russia.

No American troops were killed or wounded in the incident, officials said.

Some U.S. troops had been embedded at the time with the SDF, whose headquarters in Deir al-Zor province had been a target of the attack.

One SDF fighter was wounded, the official said. Nouri Mahmoud, spokesman for the SDF’s most powerful element, the Kurdish YPG militia, described the clash as “skirmishes” and said each side had returned to their former positions.

“We suspect Syrian pro-regime forces were attempting to seize terrain SDF had liberated from Daesh in September 2017,” the U.S. official said.

Neither U.S. officials nor the U.S.-backed coalition have offered details on the identity of attacking forces.

The coalition said in an email the pro-government forces had initiated hostilities with artillery fire, tank maneuvers and mortar fire after a steady buildup of forces over the past week.

A reporter for Syrian state TV station Ikhbariya described the groups it said had been bombed by the U.S.-led coalition as “local people fighting (Islamic State) and the SDF”.

Russia’s Interfax cited the Defence Ministry as saying the incident showed the U.S. goal in Syria was not to battle Islamic State but “the capture and withholding of the economic assets”, an apparent reference to the Khusham oil field.

Russian commanders held talks with coalition representatives after the incident, it added.

The coalition said the attack occurred around 8 km (5 miles) “east of the Euphrates River de-confliction line in Khusham”, a town southeast of the provincial capital Deir al-Zor city.