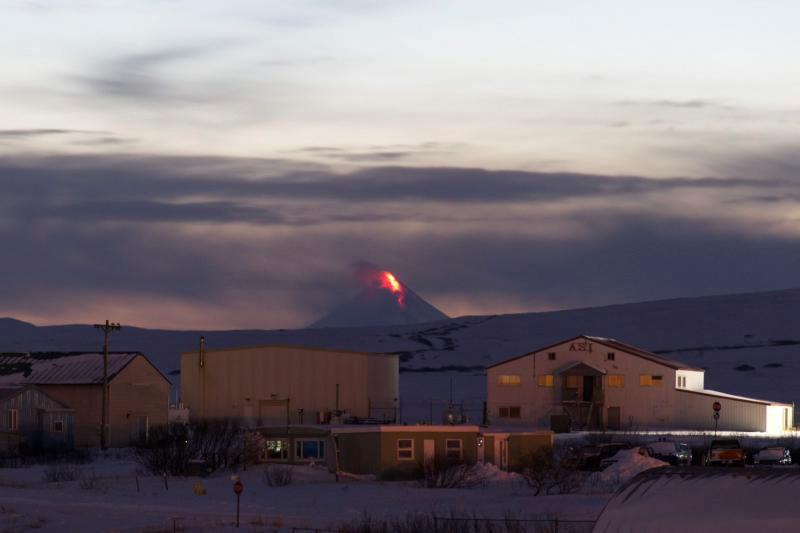 ANCHORAGE, Alaska (Reuters) – An Alaska volcano that has been rumbling since midsummer shot ash about 5 miles (8 km) into the sky on Sunday, triggering a warning to aviators and dusting one small fishing village, officials reported.

Shishaldin Volcano, one of the most active in Alaska, kicked out a plume of ash that satellite imagery detected as high as 28,000 feet (8,535 m) above sea level, according to the Alaska Volcano Observatory, the joint federal-state-university office that tracks the state’s many volcanoes.

The plume stretched about 90 miles (145 km) as of midday, blowing mostly east and over the Gulf of Alaska, said the observatory.

A sprinkling of ash was reported in the tiny Aleutian village of False Pass, about 23 miles (37 km) northeast of the Shishaldin, said David Fee, the observatory’s University of Alaska Fairbanks coordinating scientist.

“Someone reported some ash on their windshield,” he said.

False Pass has a year-round population of about 40, according to state data, but draws many more people during the summer fishing season.

Also pouring out of Shishaldin’s caldera on Sunday was a stream of red-hot lava, the observatory reported.

Shishaldin has been in an on-and-off eruptive phase since July, occasionally dribbling lava down its snowy flanks and puffing ash and steam.

Most of the ash production has been relatively minor, but Sunday’s event was serious enough to warrant a “code red” warning for air traffic to avoid the area, the second such warning in the volcano’s current eruptive phase, Fee said.

Shishaldin, about 680 miles (1,095 km) southwest of Anchorage, is the tallest mountain in the Aleutian chain, rising to 9,373 feet (2,857 m) in elevation. The upper two-thirds of the spherical peak are usually cloaked year-round in snow and ice, according to the observatory.

It is in a cluster of frequently erupting volcanoes in the eastern Aleutians. “This is the most active region in Alaska for volcanic activity,” Fee said.

ANCHORAGE, Alaska (Reuters) – One of Alaska’s most active volcanoes, a towering ice-covered cone in the Aleutian Islands, shot a cloud of ash more than 5 miles high on Friday, triggering a warning to aviators and putting on a show that was captured in satellite imagery.

The ash burst from Shishaldin Volcano, about 670 miles southwest of Anchorage, was part of an on-and-off, mostly low-level series of eruptions that began in July with a stream of lava from the crater at the peak of the 9,373-foot-tall mountain.

The ash plume was spotted by a pilot and was visible in satellite images captured from space. It drifted over the sea at least 75 miles southeast of the volcano, the Alaska Volcano Observatory reported.

No communities were affected by ashfall or were otherwise in danger as of Friday morning, said David Fee of the University of Alaska at Fairbanks, a coordinating scientist with the observatory.

“This is a remote volcano,” he said.

The National Weather Service issued an alert, and air traffic was advised to steer clear of Shishaldin, though aviators were already avoiding the volcano well before Friday because of earlier activity, Fee said.

While Friday’s cloud, the largest yet of the series, was considered moderate, conditions at Shishaldin could worsen quickly.

“Shishaldin remains at a heightened level of unrest, and explosions may occur with little warning,” the observatory warned in a public statement. Friday’s explosion lasted about an hour to 90 minutes, U.S. Geological Survey scientist Matt Haney said.