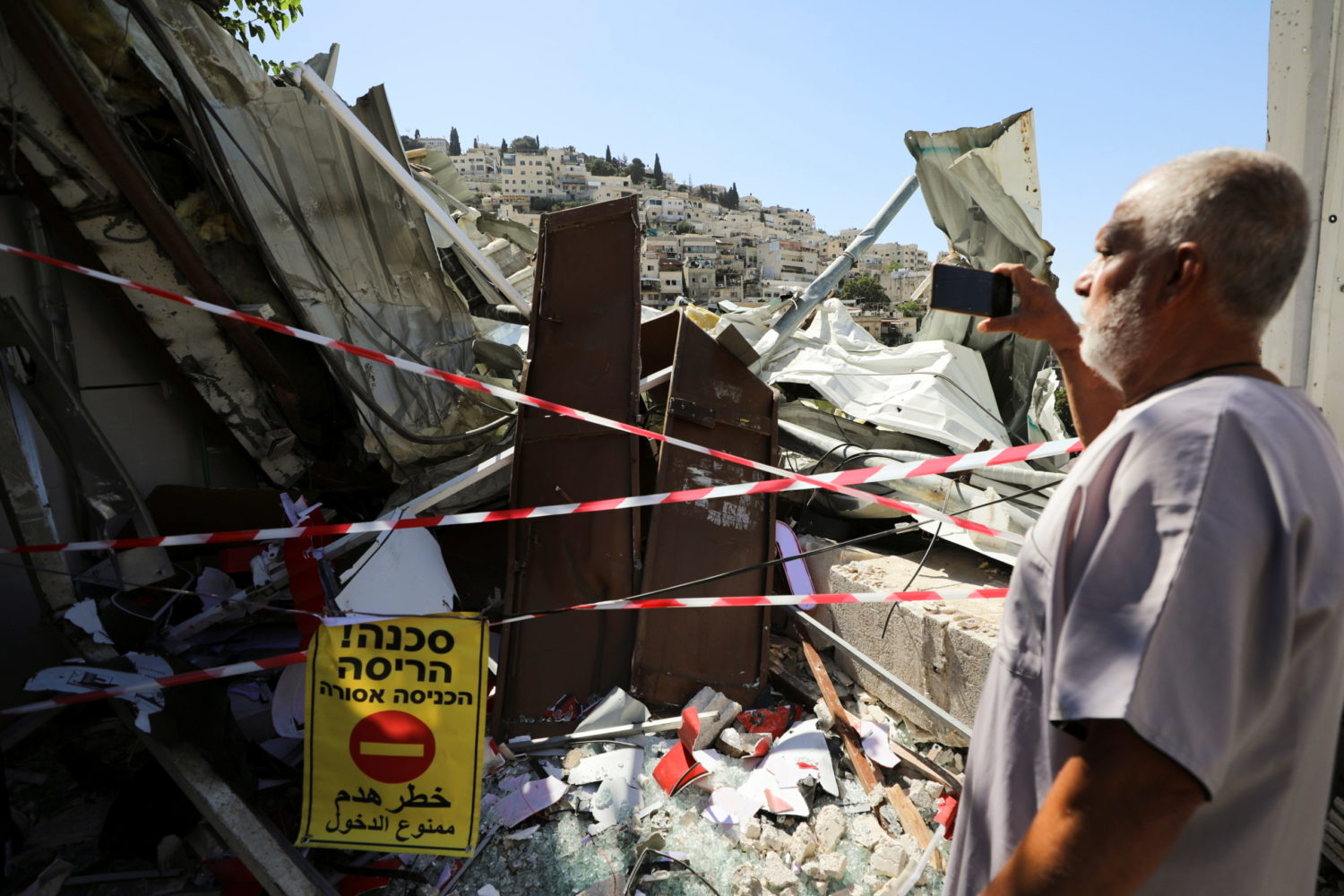 By Ammar Awad and Zainah El-Haroun

JERUSALEM (Reuters) – Israel demolished a Palestinian shop in the East Jerusalem neighborhood of Silwan on Tuesday, triggering scuffles between police and protesters who accused authorities of discriminatory enforcement of building permits in the holy city.

Palestinians seek East Jerusalem, which Israel captured in a 1967 war, for a future state. Israel deems all of Jerusalem its capital – a status not recognized internationally – and has encouraged Jewish settlement of predominantly Palestinian areas.

A bulldozer escorted by Israeli police flattened Harbi Rajabi’s butchers shop in the neighborhood which is overlooked by the Al-Aqsa Mosque, the third holiest shrine in Islam and the most sensitive site in the Israeli-Palestinian conflict.

The shop is one of at least eight properties that residents said were slated for demolition. The residents say many have been there for decades, even from before 1967. The authorities have earmarked the land for a park and say the shops and homes have been built illegally.

Mahmoud Basit who runs the butchers told Reuters 14 family members depended on income from there. “We have no other way to support our families,” said Basit, who added he would have to look for new work from scratch.

Deputy Jerusalem Mayor Arieh King said “around 20” buildings in Silwan – which Israel refers to by its Hebrew name Shiloach – had received demolition orders. Around another 60 buildings there were in violation of Israeli zoning laws, he told Reuters.

Palestinians in Silwan say it is near-impossible to get building permits. They see the demolitions as designed to drive them from Jerusalem. Disputing this, King said the municipality had approved hundreds of new Palestinian homes in Silwan.

Palestinian medics said 13 people were injured in Tuesday’s confrontations in Silwan. Police said two officers were hurt by stone-throwers and that three people were arrested for disorderly conduct and assault.

The municipality had given Palestinians until June 28 to dismantle the structures themselves. King said the land would be cleared to make way for the park and public buildings, adding that Silwan’s biblical links made it “an important historical site”.

Nader Abu Diab, who also received a demolition order, lives in fear of the knock on the door from municipal inspectors.

“My grandchildren ask me questions and I can’t answer them. They’re children. What can I tell them? That they’re going to demolish our home?” Abu Diab, 55, said.

His brother, Fakhri Abu Diab said he applied seven times for an Israeli permit to expand his home in Silwan “but it was always rejected.” He added that over a hundred Palestinians could become homeless if the current round of demolitions continues.

The future of another East Jerusalem neighborhood, Sheikh Jarrah, was one of the flashpoints at the heart of fighting between Israel and Palestinian militants last month.