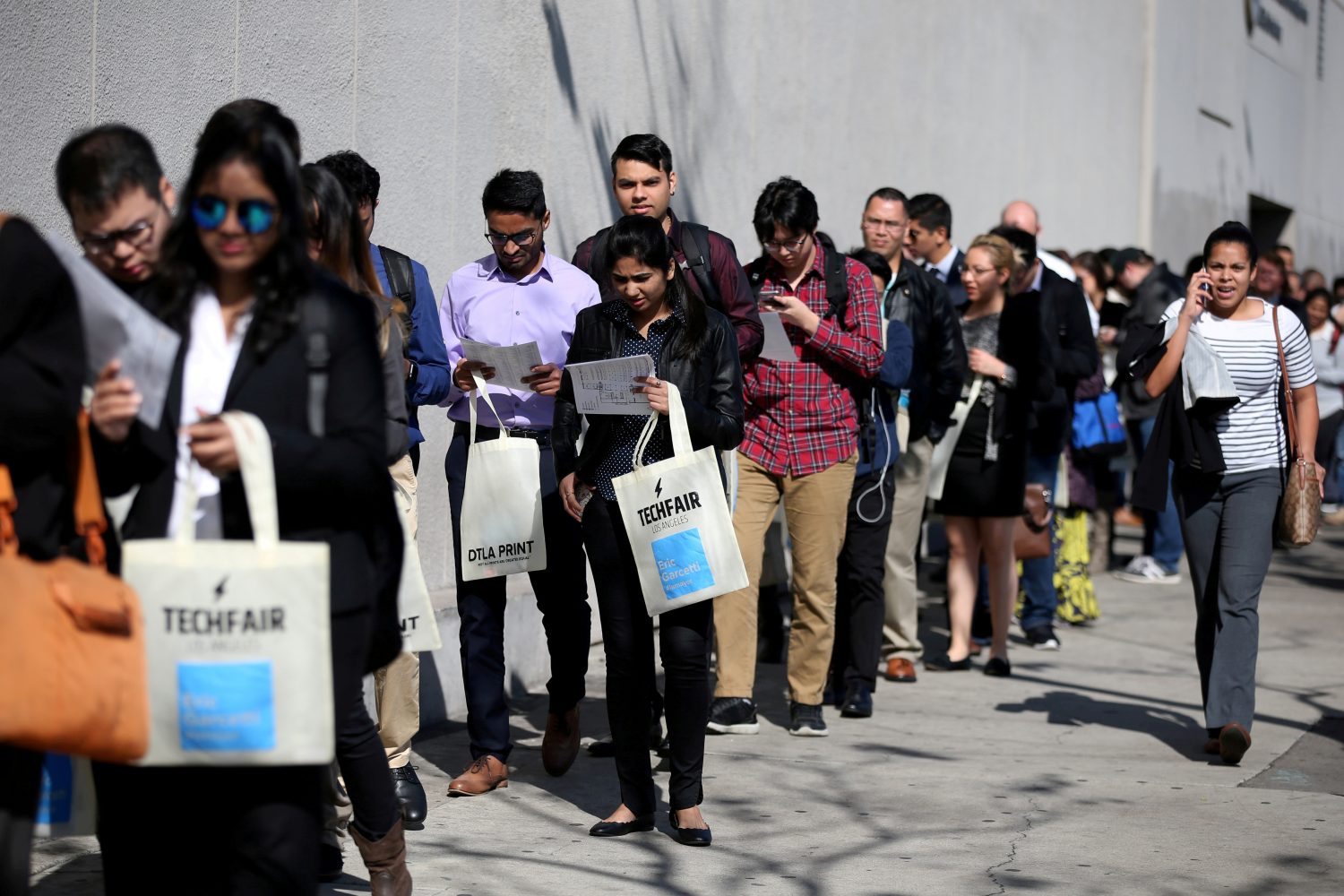 WASHINGTON (Reuters) – The number of Americans filing applications for unemployment benefits unexpectedly rose last week, which could add to concerns that the labor market was losing steam after job growth slowed sharply in May.

Other data on Thursday showed import prices fell by the most in five months in May amid a broad decline in the cost of goods, the latest indication of muted inflation pressures. Signs of a slowing labor market and tepid inflation strengthen the case for the Federal Reserve to cut interest rates this year.

U.S. central bank policymakers are scheduled to meet on June 18-19 against the backdrop of rising trade tensions. Financial markets have priced in at least two rate cuts by the end of 2019. A rate cut is not expected next Wednesday.

Initial claims for state unemployment benefits rose 3,000 to a seasonally adjusted 222,000 for the week ended June 8, the Labor Department said on Thursday. Economists polled by Reuters had forecast claims decreasing to 216,000 in the latest week.

While layoffs remain relatively low, the third straight weekly increase in claims suggests some softening in labor market conditions. The four-week moving average of claims, considered a better measure of labor market trends as it irons out week-to-week volatility, rose 2,500 to 217,750 last week.

The economy created only 75,000 jobs in May, with annual wages increasing at their slowest pace in eight months, the government reported last week. U.S. financial markets were little moved by the claims data.

The slowdown in hiring, which occurred before a recent escalation in trade tensions between the United States and China, raised fears of a sharp deceleration in economic growth. The claims data is being closely monitored for signs of any fallout from the trade war.

President Donald Trump in early May imposed additional tariffs of up to 25% on $200 billion of Chinese goods, prompting retaliation by Beijing. Trump on Monday threatened more duties on Chinese imports if no deal was reached when he meets Chinese President Xi Jinping at a G20 summit later this month in Japan.

A tariff on all goods from Mexico to force authorities in that country to stop immigrants from Central America from crossing the border into the United States was narrowly averted after the two nations struck an agreement late on Friday.

Data so far have suggested a sharp slowdown in U.S. economic growth in the second quarter after a temporary boost from exports and an accumulation of inventory early in the year. In addition to the sharp moderation in hiring last month, manufacturing production, exports and home sales dropped in April, while consumer spending cooled.

The Atlanta Fed is forecasting gross domestic product increasing at a 1.4% annualized rate in the April-June quarter. The economy grew at a 3.1% pace in the first quarter.

In another report on Thursday, the Labor Department said import prices dropped 0.3% last month, the biggest decline since last December, after edging up 0.1% in April.

Economists had forecast import prices slipping 0.2% in May. In the 12 months through May, import prices fell 1.5% after decreasing 0.3% in April. The report came on the heels of data on Wednesday showing consumer prices remained tame in May.

Import prices exclude duties. In May, prices for imported fuels and lubricants declined 1.0% after rising 1.7% percent in the prior month. Imported food prices dropped 0.8% last month after surging 2.7% in April.

Excluding fuels and food, import prices slipped 0.2% in May after falling 0.3% in the prior month. So-called core import prices decreased 1.5% in the 12 months through May. Though the dollar has weakened a bit this year, its gains last year against the currencies of the United States’ main trading partners continue to depress core import prices.

The cost of imported capital goods declined 0.1% last month. Prices for imported consumer goods excluding automobiles was unchanged. The cost of goods imported from China edged down 0.1% last month after falling 0.2% in April. Prices fell 1.4% in the 12 months through May, the largest drop since February 2017.