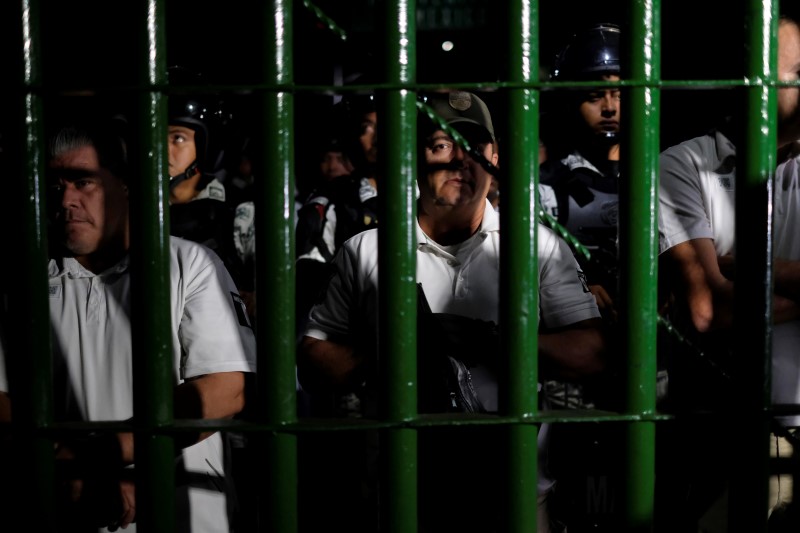 TECUN UMAN, Guatemala (Reuters) – A large caravan of Central Americans was preparing to cross the Guatemalan border into Mexico on Monday, posing a potential challenge to the Mexican government’s pledge to help the United States contain mass movements of migrants.

The migrants were massed on a bridge connecting the two countries early on Monday morning in what appeared to be a tense standoff with Mexican migration officials and soldiers.

U.S. President Donald Trump has threatened to punish Mexico and Central American countries economically if they fail to curb migrant flows, resulting in a series of agreements aimed at taking pressure off the United States in absorbing the numbers.

Migrants crossed into Mexico in small groups during the weekend after Mexican security officials blocked an effort by some Central Americans to force their way through the border.

The bulk of at least 2,000 migrants remained in the Guatemalan border town of Tecun Uman, opposite the Mexican town of Ciudad Hidalgo, with some saying they planned to set off for Mexico en masse early on Monday, believing that they stood a better chance of making progress in a large caravan.

Mexico has offered migrants work in the south, but those who do not accept it or seek asylum will not be issued safe conduct passes to the United States, the interior ministry said.

The ministry said in a statement on Sunday afternoon that Mexican authorities had received nearly 1,100 migrants in the states of Chiapas and Tabasco and set out various options to them in accordance with their migration status.

“However, in the majority of cases, once the particular migration situation has been reviewed, assisted returns will be carried out to their countries of origin, assuming that their situation warrants it,” the ministry said.

According to Guatemala, at least 4,000 people have entered from Honduras since Wednesday, making for one of the biggest surges since three Central American governments signed agreements with the Trump administration obliging them to assume more of the responsibility for dealing with migrants.

Mexico has so far controlled the border at Tecun Uman more successfully than in late 2018, when a large caravan of migrants sought to break through there. Many later crossed into Mexico via the Suchiate River dividing the two countries.

By Delphine Schrank and Sofia Menchu

TAPACHULA, Mexico/GUATEMALA CITY (Reuters) – A group of more than a thousand Central Americans in Guatemala headed toward the Mexican border on Tuesday as the first caravan of migrants paused in southern Mexico on its planned journey toward the U.S. border.

U.S. President Donald Trump has vowed to begin cutting millions of dollars in aid to Central America and called the caravan in Mexico a national emergency as he seeks to boost his Republican Party’s chances in the Nov. 6 congressional elections.

The caravan, which has been estimated at 7,000 to 10,000 mostly Honduran migrants fleeing violence and poverty in their homelands, is currently in the town of Huixtla in Chiapas state around 31 miles (50 km) north of the Guatemalan border.

Mexico’s government said in a statement on Tuesday that it had received 1,699 requests for refugee status, including children. The government estimates there are around 4,500 people in the group.

Hundreds of migrants were resting in Huixtla on Tuesday, as religious groups and companies donated clothes. Local authorities provided vaccines, food and drink.

“When we heard the caravan was coming (we joined)…people in Guatemala are also suffering from poverty. So this is an opportunity to improve my family’s life,” said Elsa Romero, a Guatemalan mother of four.

Separately, Casa del Migrante, a migrant shelter in Guatemala City, said more than 1,000 people who set out from Honduras were moving through Guatemala toward the Mexican border. Some local media said there were more than 2,000.

Trump and fellow Republicans have sought to make the caravan and immigration issues in the election, which will determine whether their party keeps control of the U.S. Senate and U.S. House of Representatives.

Honduran authorities say that at least two men have died so far on Mexican roads during the advance of the caravan. One of the men fell off a truck in Mexico, and the other died trying to get onto a truck in Guatemala, authorities said.

Mexico, which has refused Trump’s demands that it pay for a border wall between the countries, tries to walk a fine line between showing solidarity with the Central American migrants and responding to Washington’s demands to control its borders.

Mexico hopes to disperse the convoy long before it can reach the border, telling migrants to register with authorities in order to submit applications for asylum in Mexico.

That process can last weeks, and migrants are supposed to stay where they register while applications are processed. If they violate those rules, they face deportation.